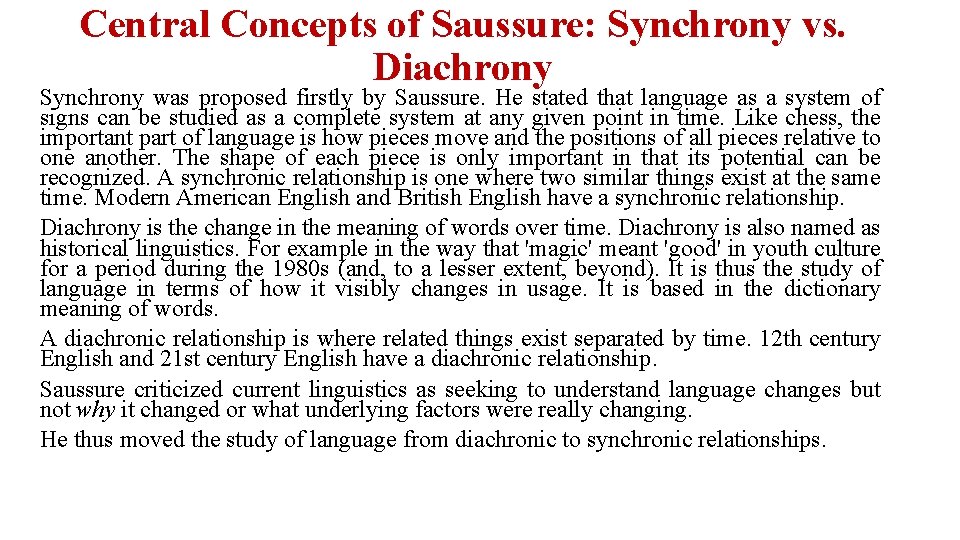 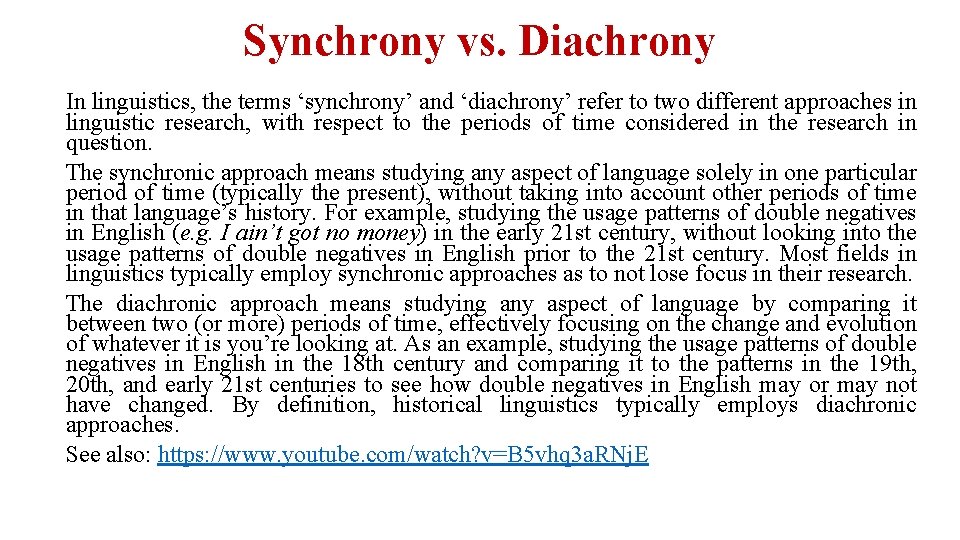 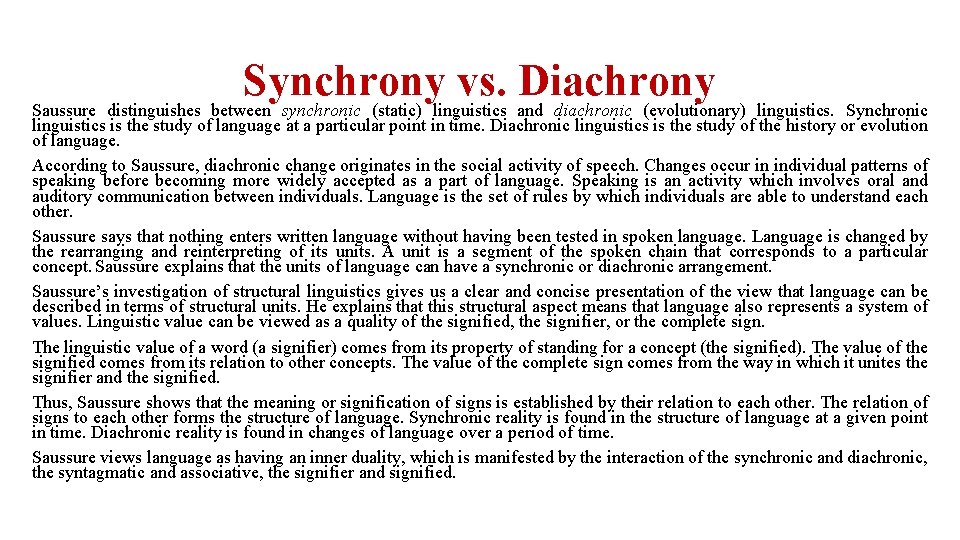 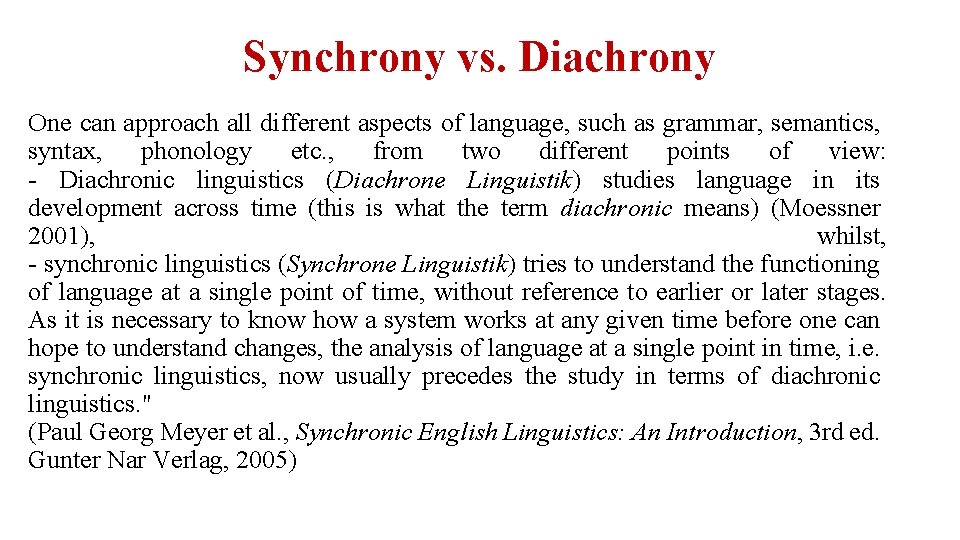 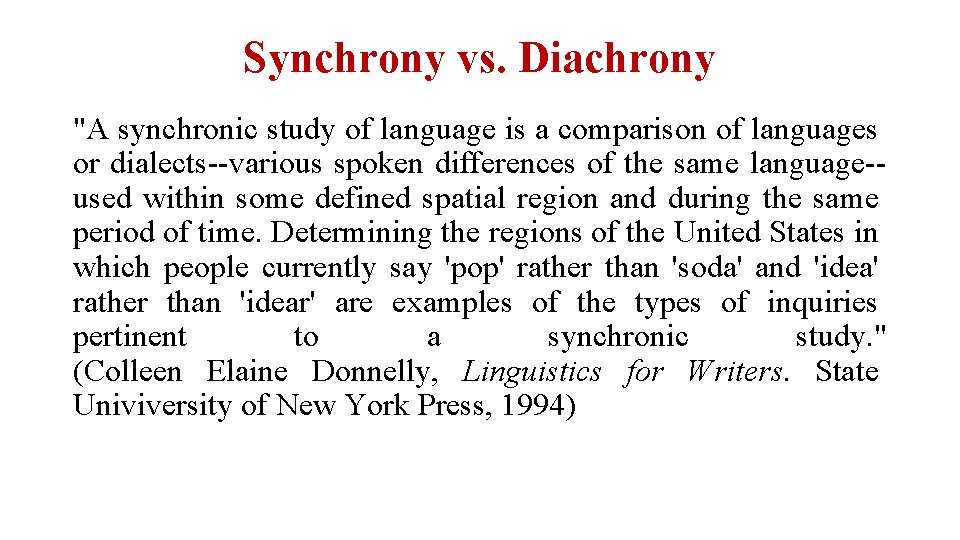 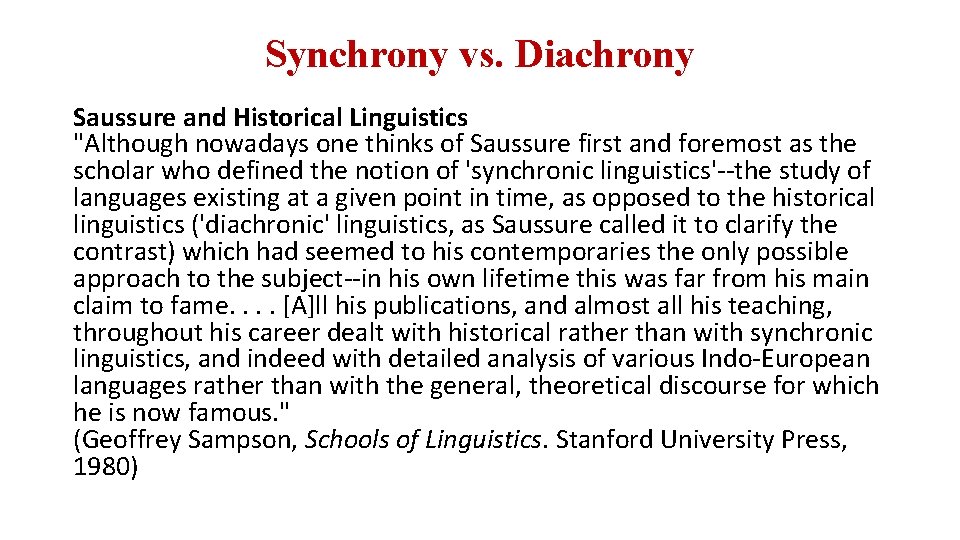 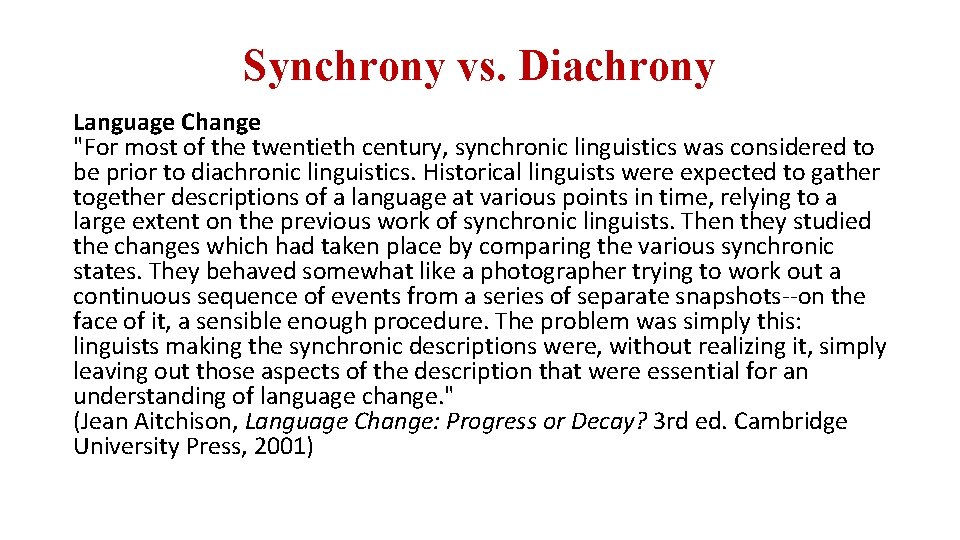 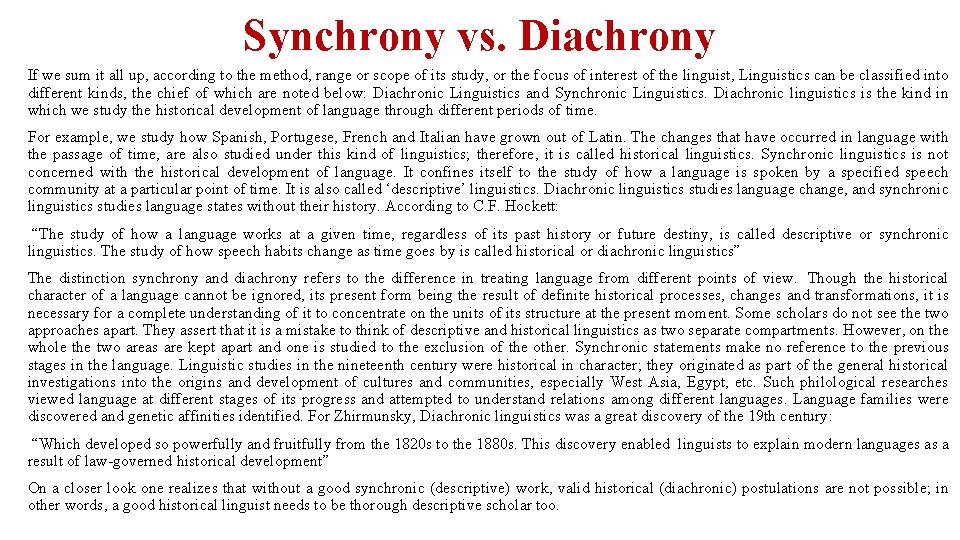 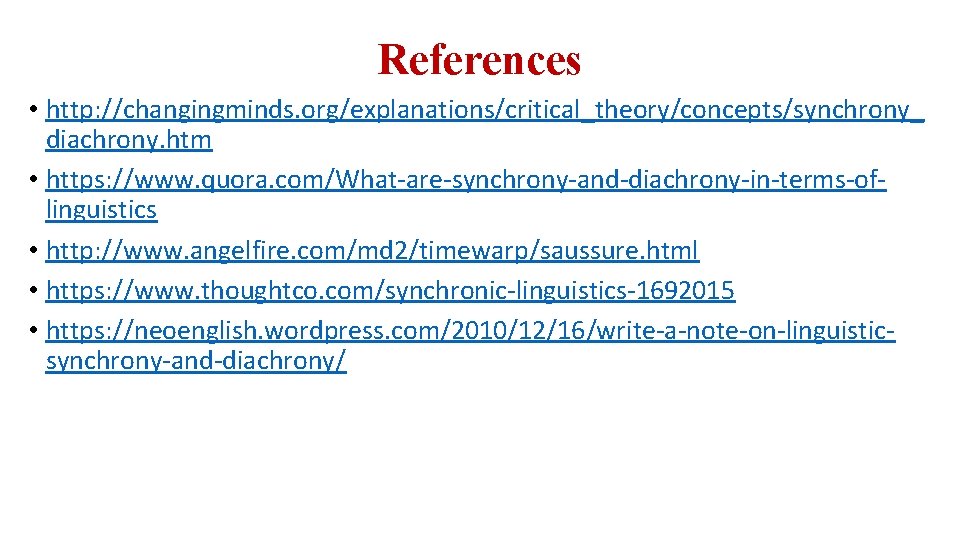 Central Concepts of Saussure: Synchrony vs. Diachrony Synchrony was proposed firstly by Saussure. He stated that language as a system of signs can be studied as a complete system at any given point in time. Like chess, the important part of language is how pieces move and the positions of all pieces relative to one another. The shape of each piece is only important in that its potential can be recognized. A synchronic relationship is one where two similar things exist at the same time. Modern American English and British English have a synchronic relationship. Diachrony is the change in the meaning of words over time. Diachrony is also named as historical linguistics. For example in the way that 'magic' meant 'good' in youth culture for a period during the 1980 s (and, to a lesser extent, beyond). It is thus the study of language in terms of how it visibly changes in usage. It is based in the dictionary meaning of words. A diachronic relationship is where related things exist separated by time. 12 th century English and 21 st century English have a diachronic relationship. Saussure criticized current linguistics as seeking to understand language changes but not why it changed or what underlying factors were really changing. He thus moved the study of language from diachronic to synchronic relationships.

Synchrony vs. Diachrony Saussure distinguishes between synchronic (static) linguistics and diachronic (evolutionary) linguistics. Synchronic linguistics is the study of language at a particular point in time. Diachronic linguistics is the study of the history or evolution of language. According to Saussure, diachronic change originates in the social activity of speech. Changes occur in individual patterns of speaking before becoming more widely accepted as a part of language. Speaking is an activity which involves oral and auditory communication between individuals. Language is the set of rules by which individuals are able to understand each other. Saussure says that nothing enters written language without having been tested in spoken language. Language is changed by the rearranging and reinterpreting of its units. A unit is a segment of the spoken chain that corresponds to a particular concept. Saussure explains that the units of language can have a synchronic or diachronic arrangement. Saussure’s investigation of structural linguistics gives us a clear and concise presentation of the view that language can be described in terms of structural units. He explains that this structural aspect means that language also represents a system of values. Linguistic value can be viewed as a quality of the signified, the signifier, or the complete sign. The linguistic value of a word (a signifier) comes from its property of standing for a concept (the signified). The value of the signified comes from its relation to other concepts. The value of the complete sign comes from the way in which it unites the signifier and the signified. Thus, Saussure shows that the meaning or signification of signs is established by their relation to each other. The relation of signs to each other forms the structure of language. Synchronic reality is found in the structure of language at a given point in time. Diachronic reality is found in changes of language over a period of time. Saussure views language as having an inner duality, which is manifested by the interaction of the synchronic and diachronic, the syntagmatic and associative, the signifier and signified.

Synchrony vs. Diachrony One can approach all different aspects of language, such as grammar, semantics, syntax, phonology etc. , from two different points of view: - Diachronic linguistics (Diachrone Linguistik) studies language in its development across time (this is what the term diachronic means) (Moessner 2001), whilst, - synchronic linguistics (Synchrone Linguistik) tries to understand the functioning of language at a single point of time, without reference to earlier or later stages. As it is necessary to know how a system works at any given time before one can hope to understand changes, the analysis of language at a single point in time, i. e. synchronic linguistics, now usually precedes the study in terms of diachronic linguistics. " (Paul Georg Meyer et al. , Synchronic English Linguistics: An Introduction, 3 rd ed. Gunter Nar Verlag, 2005)

Synchrony vs. Diachrony "A synchronic study of language is a comparison of languages or dialects--various spoken differences of the same language-used within some defined spatial region and during the same period of time. Determining the regions of the United States in which people currently say 'pop' rather than 'soda' and 'idea' rather than 'idear' are examples of the types of inquiries pertinent to a synchronic study. " (Colleen Elaine Donnelly, Linguistics for Writers. State Univiversity of New York Press, 1994)

Synchrony vs. Diachrony Saussure and Historical Linguistics "Although nowadays one thinks of Saussure first and foremost as the scholar who defined the notion of 'synchronic linguistics'--the study of languages existing at a given point in time, as opposed to the historical linguistics ('diachronic' linguistics, as Saussure called it to clarify the contrast) which had seemed to his contemporaries the only possible approach to the subject--in his own lifetime this was far from his main claim to fame. . [A]ll his publications, and almost all his teaching, throughout his career dealt with historical rather than with synchronic linguistics, and indeed with detailed analysis of various Indo-European languages rather than with the general, theoretical discourse for which he is now famous. " (Geoffrey Sampson, Schools of Linguistics. Stanford University Press, 1980)

Synchrony vs. Diachrony Language Change "For most of the twentieth century, synchronic linguistics was considered to be prior to diachronic linguistics. Historical linguists were expected to gather together descriptions of a language at various points in time, relying to a large extent on the previous work of synchronic linguists. Then they studied the changes which had taken place by comparing the various synchronic states. They behaved somewhat like a photographer trying to work out a continuous sequence of events from a series of separate snapshots--on the face of it, a sensible enough procedure. The problem was simply this: linguists making the synchronic descriptions were, without realizing it, simply leaving out those aspects of the description that were essential for an understanding of language change. " (Jean Aitchison, Language Change: Progress or Decay? 3 rd ed. Cambridge University Press, 2001)

Synchrony vs. Diachrony If we sum it all up, according to the method, range or scope of its study, or the focus of interest of the linguist, Linguistics can be classified into different kinds, the chief of which are noted below: Diachronic Linguistics and Synchronic Linguistics. Diachronic linguistics is the kind in which we study the historical development of language through different periods of time. For example, we study how Spanish, Portugese, French and Italian have grown out of Latin. The changes that have occurred in language with the passage of time, are also studied under this kind of linguistics; therefore, it is called historical linguistics. Synchronic linguistics is not concerned with the historical development of language. It confines itself to the study of how a language is spoken by a specified speech community at a particular point of time. It is also called ‘descriptive’ linguistics. Diachronic linguistics studies language change, and synchronic linguistics studies language states without their history. According to C. F. Hockett: “The study of how a language works at a given time, regardless of its past history or future destiny, is called descriptive or synchronic linguistics. The study of how speech habits change as time goes by is called historical or diachronic linguistics” The distinction synchrony and diachrony refers to the difference in treating language from different points of view. Though the historical character of a language cannot be ignored, its present form being the result of definite historical processes, changes and transformations, it is necessary for a complete understanding of it to concentrate on the units of its structure at the present moment. Some scholars do not see the two approaches apart. They assert that it is a mistake to think of descriptive and historical linguistics as two separate compartments. However, on the whole the two areas are kept apart and one is studied to the exclusion of the other. Synchronic statements make no reference to the previous stages in the language. Linguistic studies in the nineteenth century were historical in character; they originated as part of the general historical investigations into the origins and development of cultures and communities, especially West Asia, Egypt, etc. Such philological researches viewed language at different stages of its progress and attempted to understand relations among different languages. Language families were discovered and genetic affinities identified. For Zhirmunsky, Diachronic linguistics was a great discovery of the 19 th century: “Which developed so powerfully and fruitfully from the 1820 s to the 1880 s. This discovery enabled linguists to explain modern languages as a result of law-governed historical development” On a closer look one realizes that without a good synchronic (descriptive) work, valid historical (diachronic) postulations are not possible; in other words, a good historical linguist needs to be thorough descriptive scholar too. 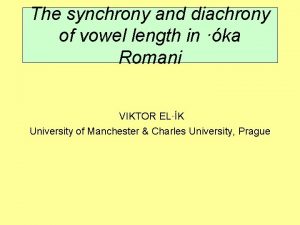 The synchrony and diachrony of vowel length in 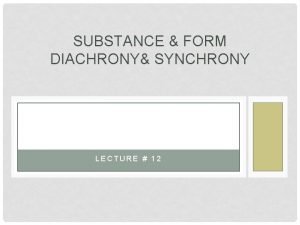 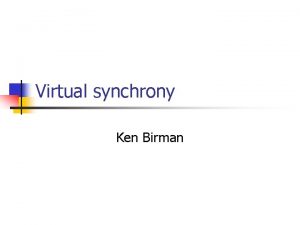 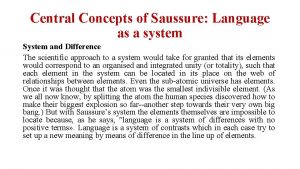 Central Concepts of Saussure Language as a system 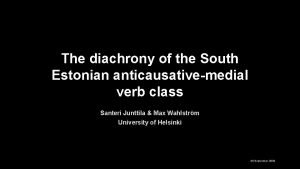 The diachrony of the South Estonian anticausativemedial verb 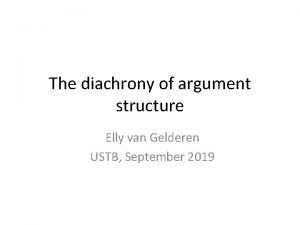 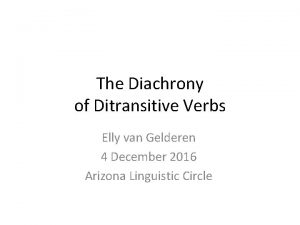 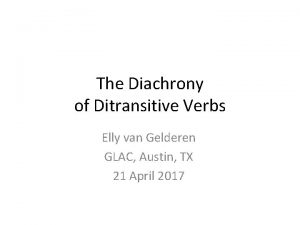