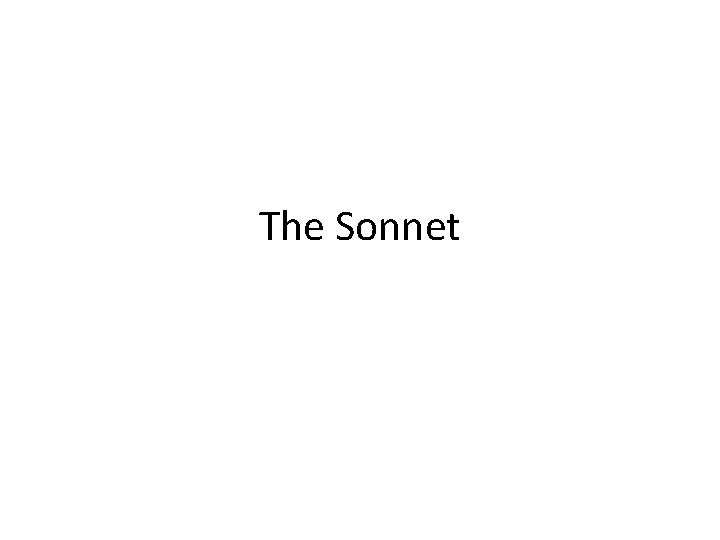 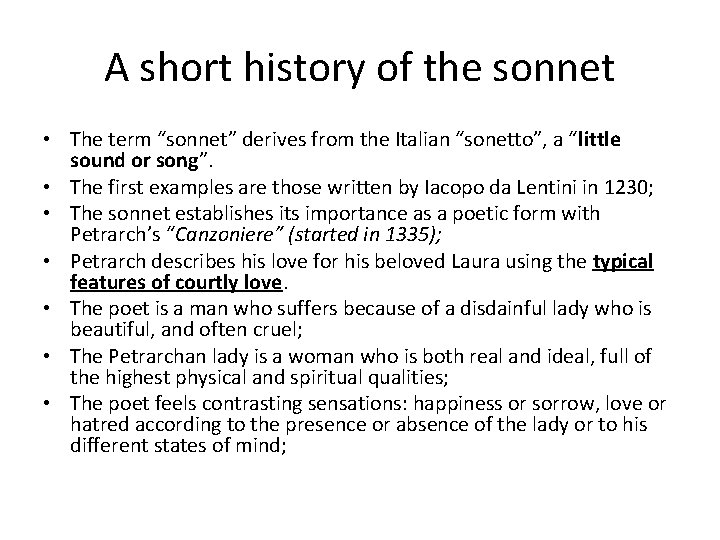 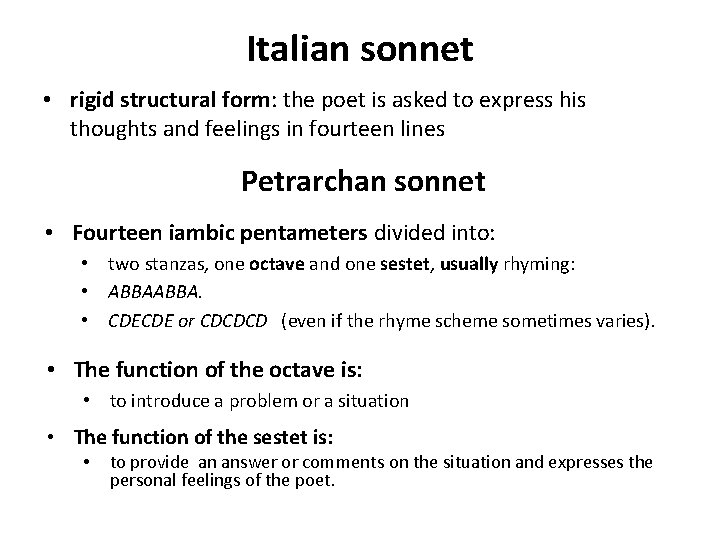 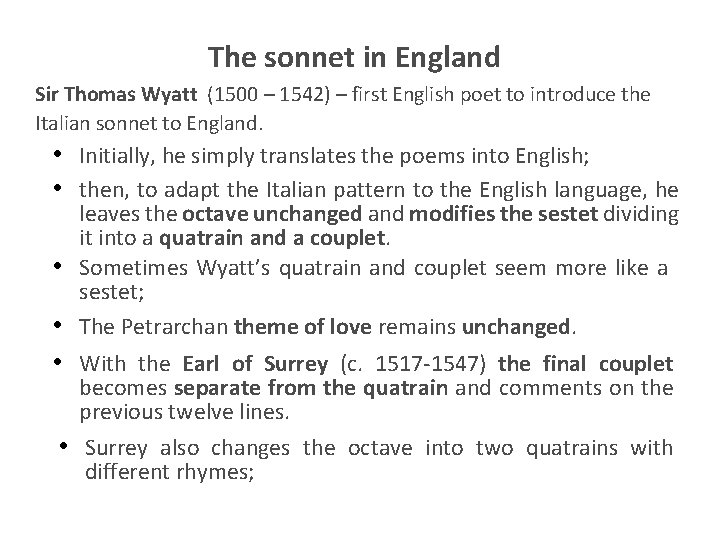 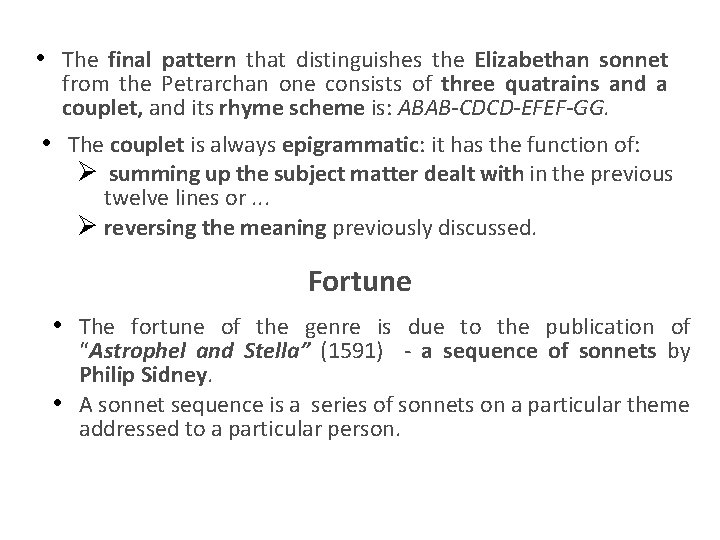 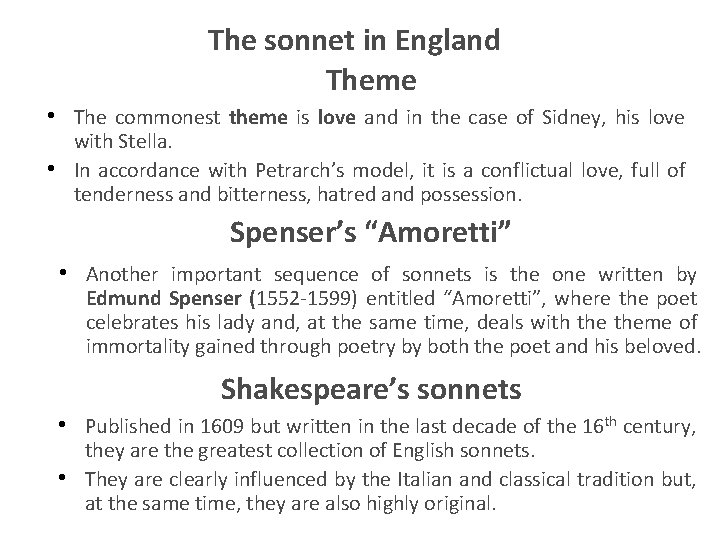 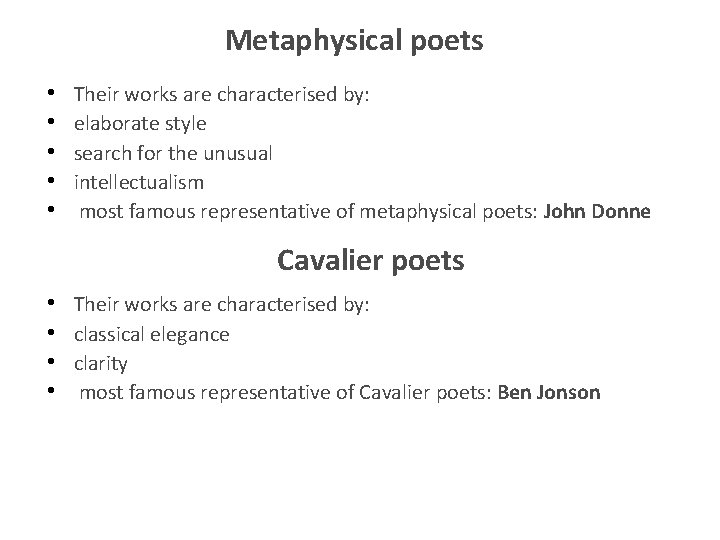 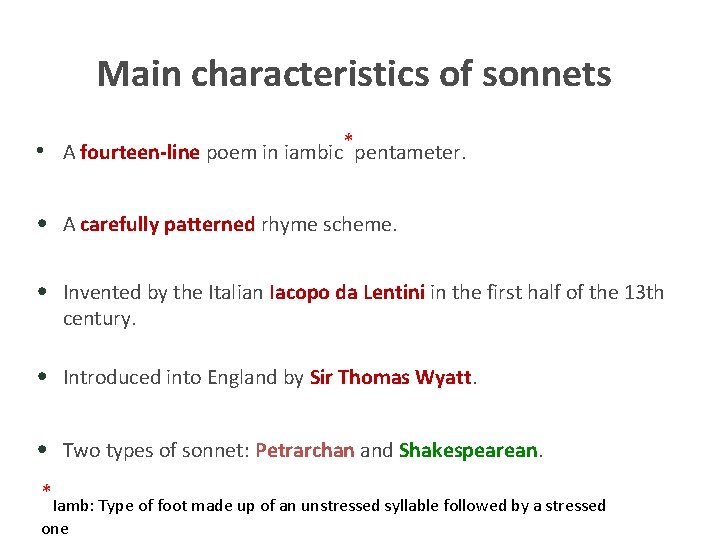 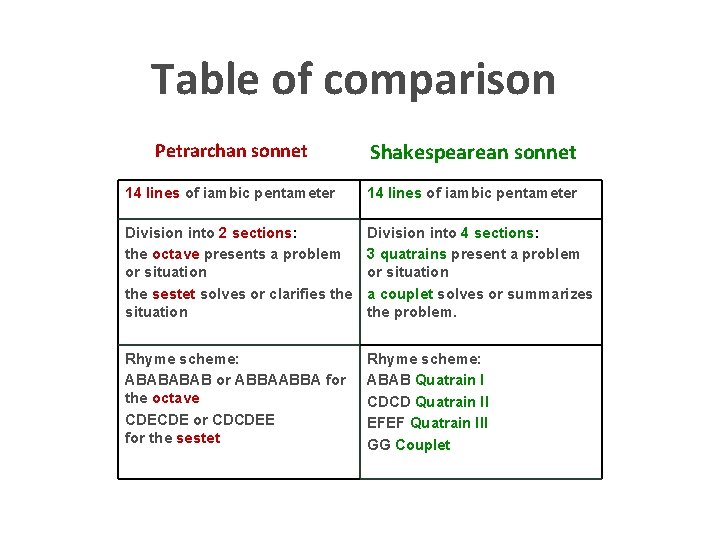 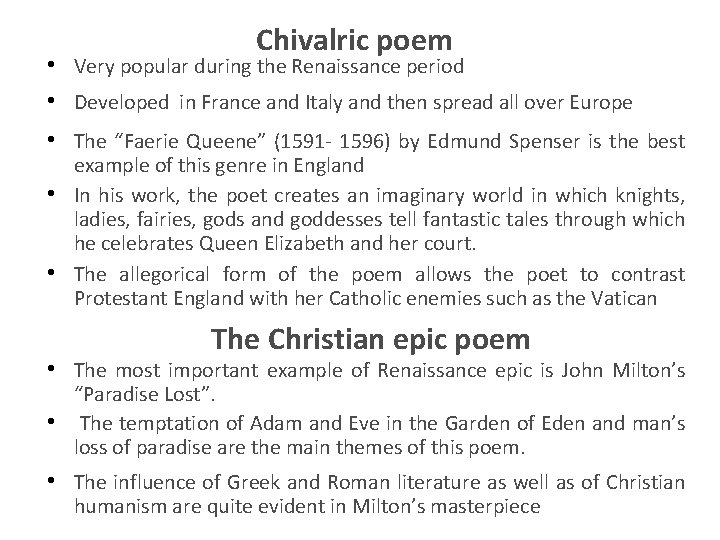 A short history of the sonnet • The term “sonnet” derives from the Italian “sonetto”, a “little sound or song”. • The first examples are those written by Iacopo da Lentini in 1230; • The sonnet establishes its importance as a poetic form with Petrarch’s “Canzoniere” (started in 1335); • Petrarch describes his love for his beloved Laura using the typical features of courtly love. • The poet is a man who suffers because of a disdainful lady who is beautiful, and often cruel; • The Petrarchan lady is a woman who is both real and ideal, full of the highest physical and spiritual qualities; • The poet feels contrasting sensations: happiness or sorrow, love or hatred according to the presence or absence of the lady or to his different states of mind;

Italian sonnet • rigid structural form: the poet is asked to express his thoughts and feelings in fourteen lines Petrarchan sonnet • Fourteen iambic pentameters divided into: • two stanzas, one octave and one sestet, usually rhyming: • ABBA. • CDECDE or CDCDCD (even if the rhyme scheme sometimes varies). • The function of the octave is: • to introduce a problem or a situation • The function of the sestet is: • to provide an answer or comments on the situation and expresses the personal feelings of the poet.

The sonnet in England Sir Thomas Wyatt (1500 – 1542) – first English poet to introduce the Italian sonnet to England. • Initially, he simply translates the poems into English; • then, to adapt the Italian pattern to the English language, he leaves the octave unchanged and modifies the sestet dividing it into a quatrain and a couplet. • Sometimes Wyatt’s quatrain and couplet seem more like a sestet; • The Petrarchan theme of love remains unchanged. • With the Earl of Surrey (c. 1517 -1547) the final couplet becomes separate from the quatrain and comments on the previous twelve lines. • Surrey also changes the octave into two quatrains with different rhymes;

• The final pattern that distinguishes the Elizabethan sonnet from the Petrarchan one consists of three quatrains and a couplet, and its rhyme scheme is: ABAB-CDCD-EFEF-GG. • The couplet is always epigrammatic: it has the function of: Ø summing up the subject matter dealt with in the previous twelve lines or. . . Ø reversing the meaning previously discussed. Fortune • The fortune of the genre is due to the publication of “Astrophel and Stella” (1591) - a sequence of sonnets by Philip Sidney. • A sonnet sequence is a series of sonnets on a particular theme addressed to a particular person.

The sonnet in England Theme • The commonest theme is love and in the case of Sidney, his love with Stella. • In accordance with Petrarch’s model, it is a conflictual love, full of tenderness and bitterness, hatred and possession. Spenser’s “Amoretti” • Another important sequence of sonnets is the one written by Edmund Spenser (1552 -1599) entitled “Amoretti”, where the poet celebrates his lady and, at the same time, deals with theme of immortality gained through poetry by both the poet and his beloved. Shakespeare’s sonnets • Published in 1609 but written in the last decade of the 16 th century, they are the greatest collection of English sonnets. • They are clearly influenced by the Italian and classical tradition but, at the same time, they are also highly original.

Main characteristics of sonnets • A fourteen-line poem in iambic*pentameter. • A carefully patterned rhyme scheme. • Invented by the Italian Iacopo da Lentini in the first half of the 13 th century. • Introduced into England by Sir Thomas Wyatt. • Two types of sonnet: Petrarchan and Shakespearean. *Iamb: Type of foot made up of an unstressed syllable followed by a stressed one

Table of comparison Petrarchan sonnet Shakespearean sonnet 14 lines of iambic pentameter Division into 2 sections: the octave presents a problem or situation the sestet solves or clarifies the situation Division into 4 sections: 3 quatrains present a problem or situation a couplet solves or summarizes the problem. Rhyme scheme: ABAB or ABBA for the octave CDECDE or CDCDEE for the sestet Rhyme scheme: ABAB Quatrain I CDCD Quatrain II EFEF Quatrain III GG Couplet

Chivalric poem • Very popular during the Renaissance period • Developed in France and Italy and then spread all over Europe • The “Faerie Queene” (1591 - 1596) by Edmund Spenser is the best example of this genre in England • In his work, the poet creates an imaginary world in which knights, ladies, fairies, gods and goddesses tell fantastic tales through which he celebrates Queen Elizabeth and her court. • The allegorical form of the poem allows the poet to contrast Protestant England with her Catholic enemies such as the Vatican The Christian epic poem • The most important example of Renaissance epic is John Milton’s “Paradise Lost”. • The temptation of Adam and Eve in the Garden of Eden and man’s loss of paradise are the main themes of this poem. • The influence of Greek and Roman literature as well as of Christian humanism are quite evident in Milton’s masterpiece 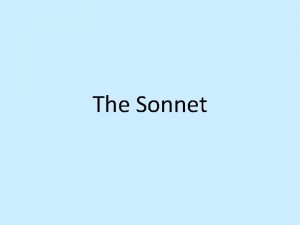 The Sonnet History of the Sonnet The sonnet 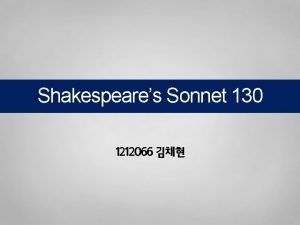 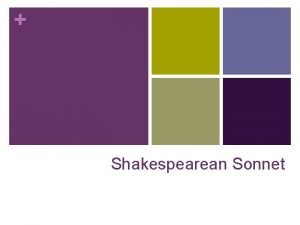 Shakespearean Sonnet What makes a sonnet a sonnet 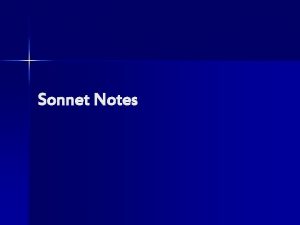 Sonnet Notes sonnet n What is a sonnet 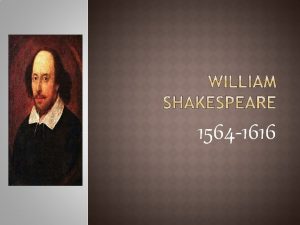 Sonnet I What is a sonnet A Sonnet 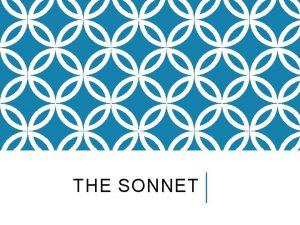 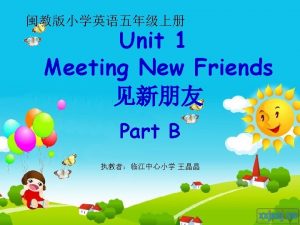 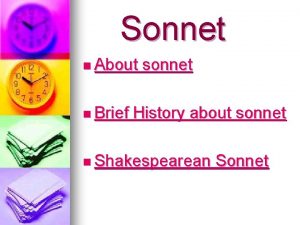