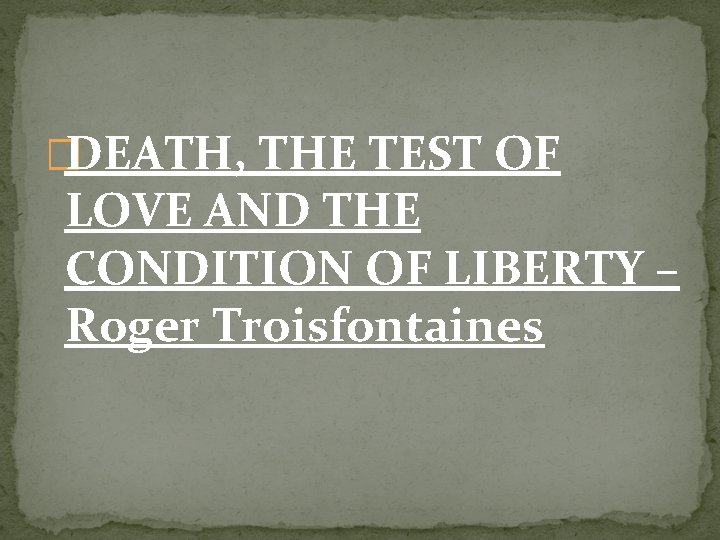 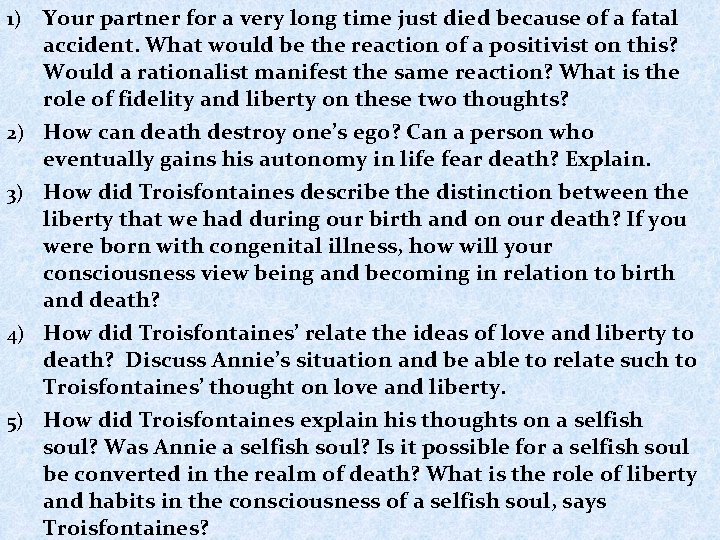 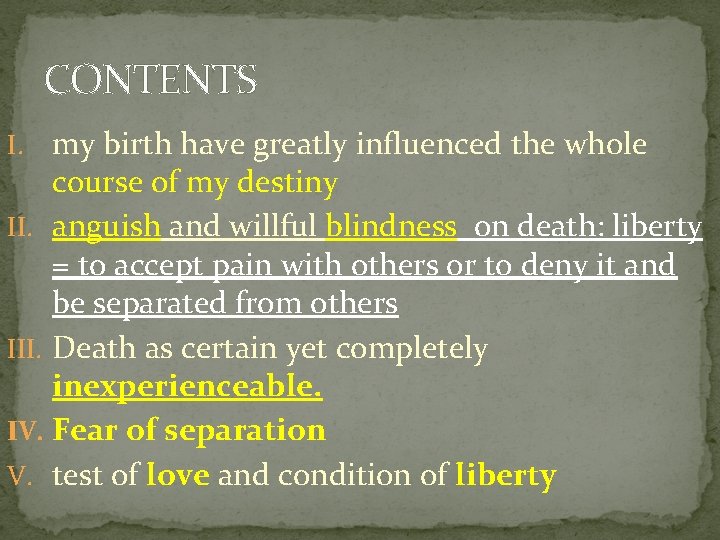 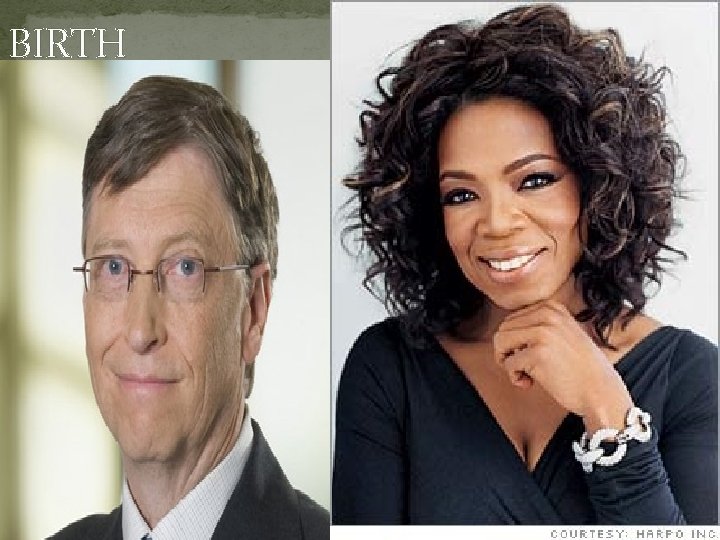 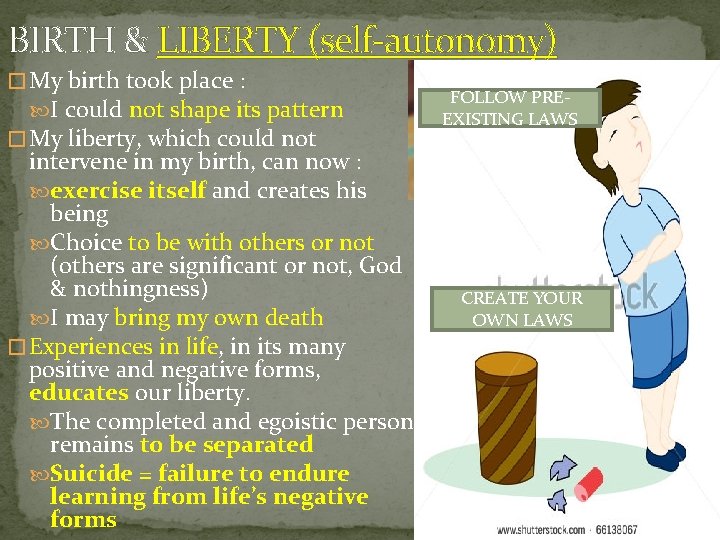 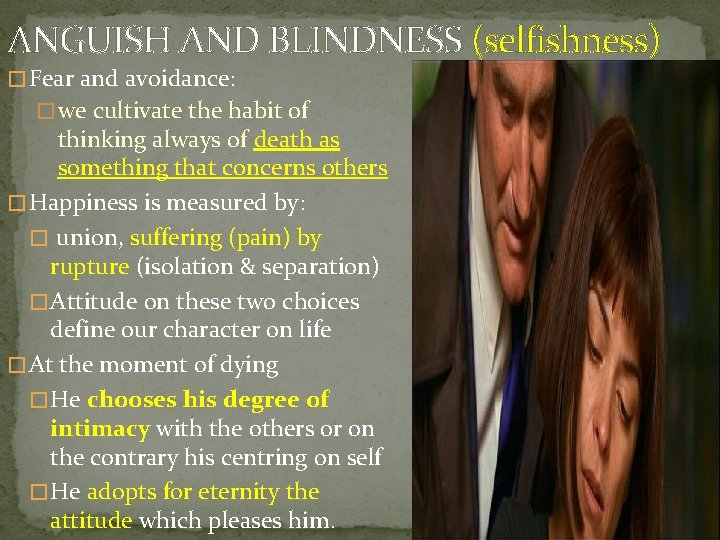 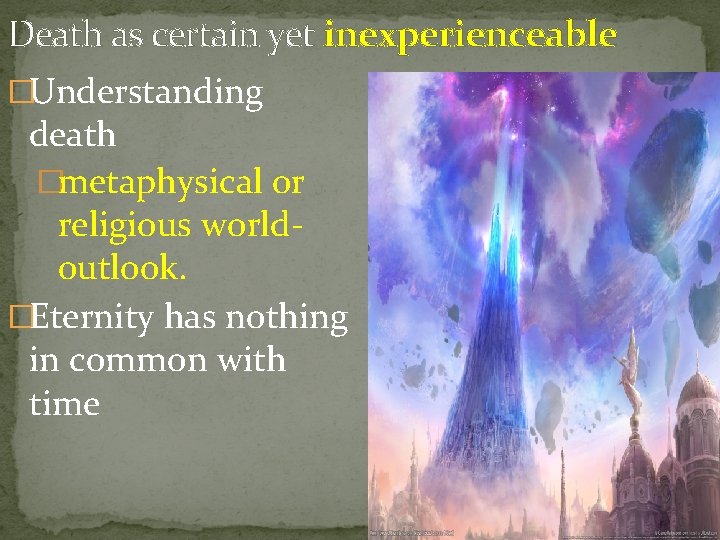 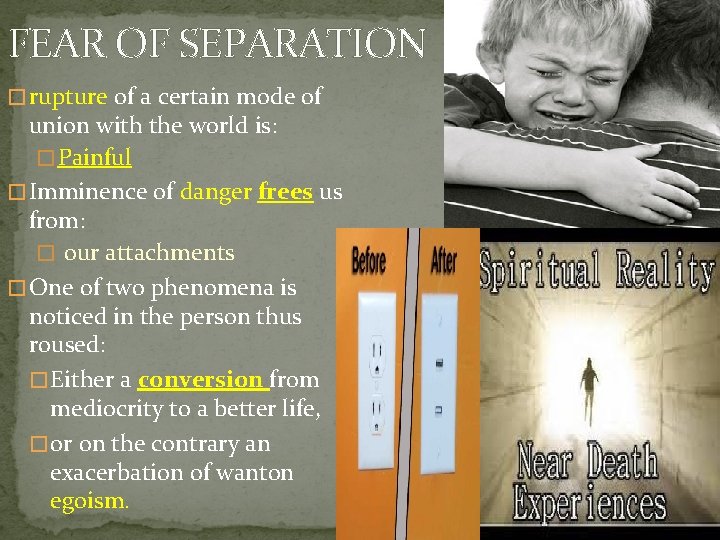 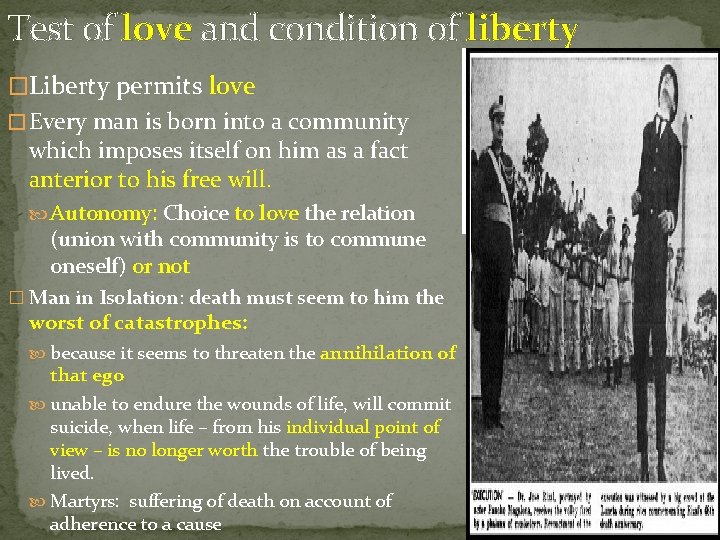 �DEATH, THE TEST OF LOVE AND THE CONDITION OF LIBERTY – Roger Troisfontaines

1) 2) 3) 4) 5) Your partner for a very long time just died because of a fatal accident. What would be the reaction of a positivist on this? Would a rationalist manifest the same reaction? What is the role of fidelity and liberty on these two thoughts? How can death destroy one’s ego? Can a person who eventually gains his autonomy in life fear death? Explain. How did Troisfontaines describe the distinction between the liberty that we had during our birth and on our death? If you were born with congenital illness, how will your consciousness view being and becoming in relation to birth and death? How did Troisfontaines’ relate the ideas of love and liberty to death? Discuss Annie’s situation and be able to relate such to Troisfontaines’ thought on love and liberty. How did Troisfontaines explain his thoughts on a selfish soul? Was Annie a selfish soul? Is it possible for a selfish soul be converted in the realm of death? What is the role of liberty and habits in the consciousness of a selfish soul, says Troisfontaines?

CONTENTS my birth have greatly influenced the whole course of my destiny II. anguish and willful blindness on death: liberty = to accept pain with others or to deny it and be separated from others III. Death as certain yet completely inexperienceable. IV. Fear of separation V. test of love and condition of liberty I.

BIRTH & LIBERTY (self-autonomy) � My birth took place : I could not shape its pattern � My liberty, which could not intervene in my birth, can now : exercise itself and creates his being Choice to be with others or not (others are significant or not, God & nothingness) I may bring my own death � Experiences in life, in its many positive and negative forms, educates our liberty. The completed and egoistic person remains to be separated Suicide = failure to endure learning from life’s negative forms FOLLOW PREEXISTING LAWS CREATE YOUR OWN LAWS

ANGUISH AND BLINDNESS (selfishness) � Fear and avoidance: � we cultivate the habit of thinking always of death as something that concerns others � Happiness is measured by: � union, suffering (pain) by rupture (isolation & separation) � Attitude on these two choices define our character on life � At the moment of dying � He chooses his degree of intimacy with the others or on the contrary his centring on self � He adopts for eternity the attitude which pleases him.

Death as certain yet inexperienceable �Understanding death �metaphysical or religious worldoutlook. �Eternity has nothing in common with time

FEAR OF SEPARATION � rupture of a certain mode of union with the world is: � Painful � Imminence of danger frees us from: � our attachments � One of two phenomena is noticed in the person thus roused: � Either a conversion from mediocrity to a better life, � or on the contrary an exacerbation of wanton egoism.

Test of love and condition of liberty �Liberty permits love � Every man is born into a community which imposes itself on him as a fact anterior to his free will. Autonomy: Choice to love the relation (union with community is to commune oneself) or not � Man in Isolation: death must seem to him the worst of catastrophes: because it seems to threaten the annihilation of that ego unable to endure the wounds of life, will commit suicide, when life – from his individual point of view – is no longer worth the trouble of being lived. Martyrs: suffering of death on account of adherence to a cause 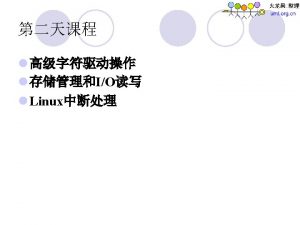 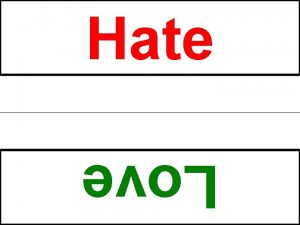 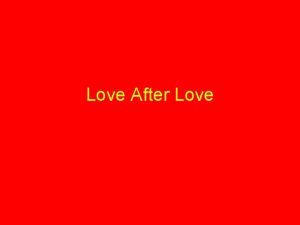 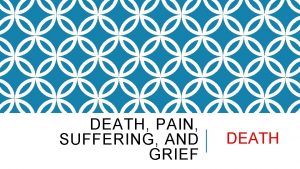 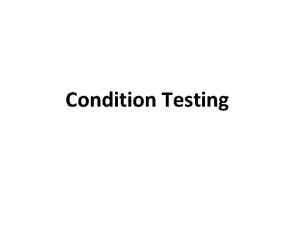 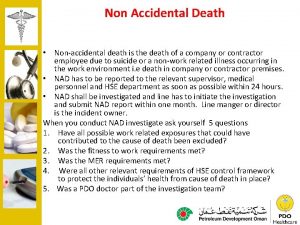 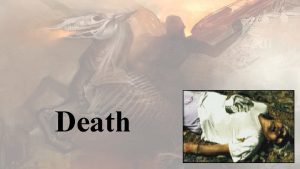 Death What is Death Death is a process 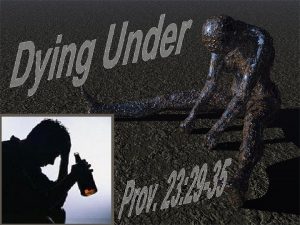