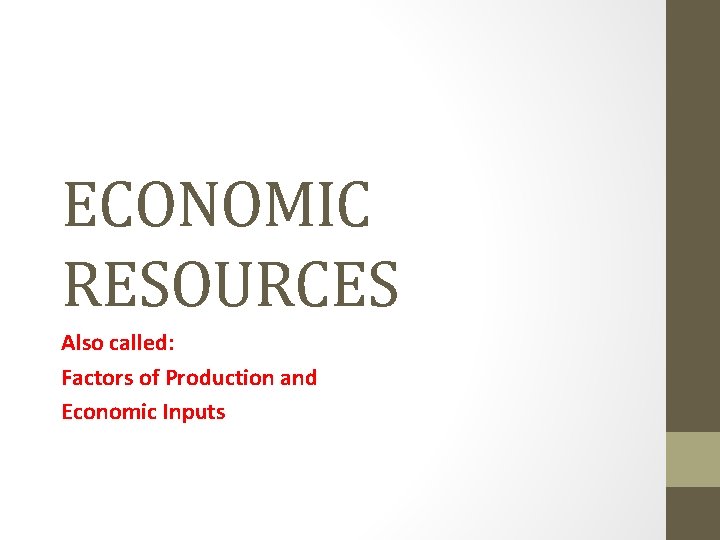 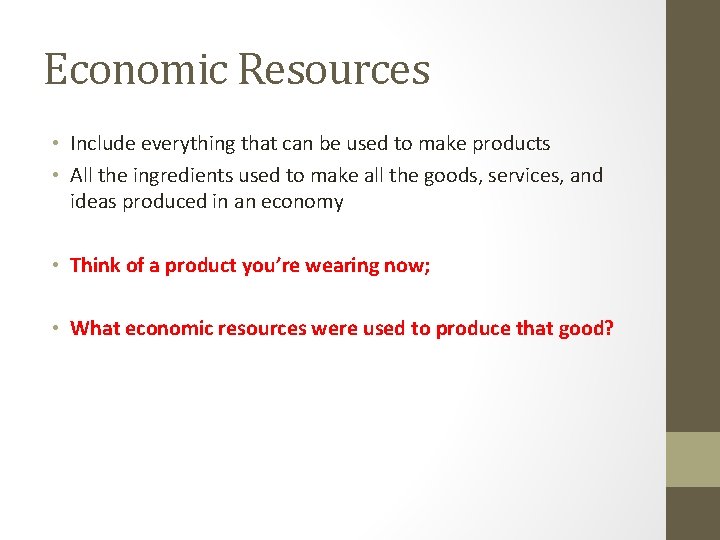 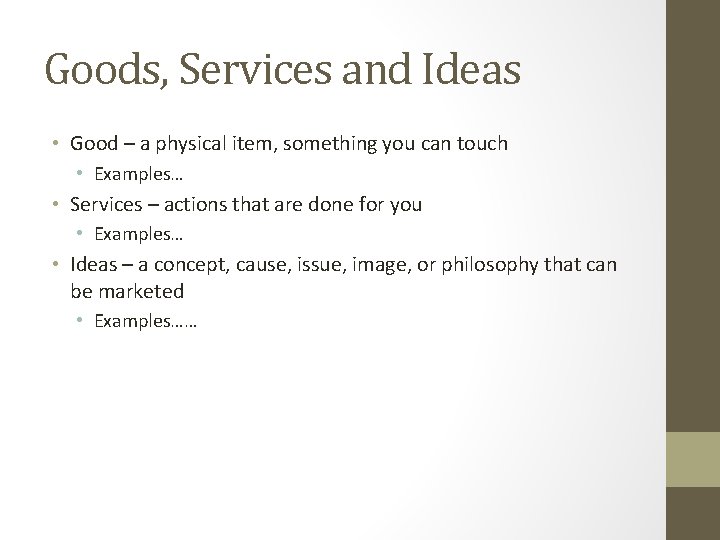 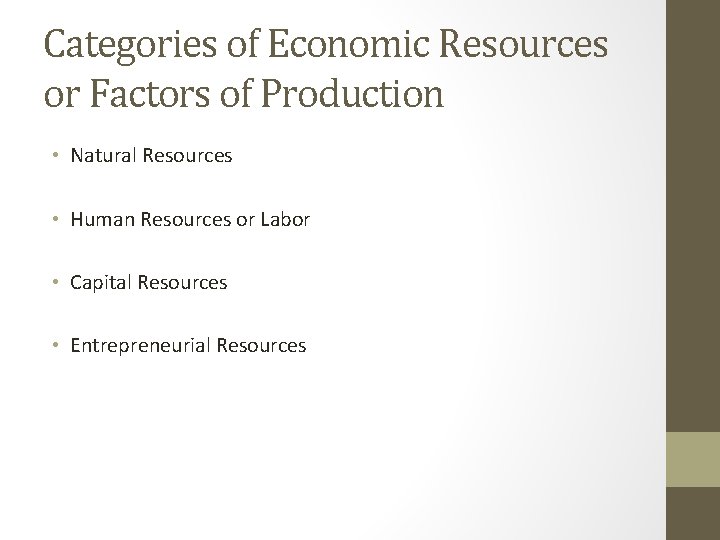 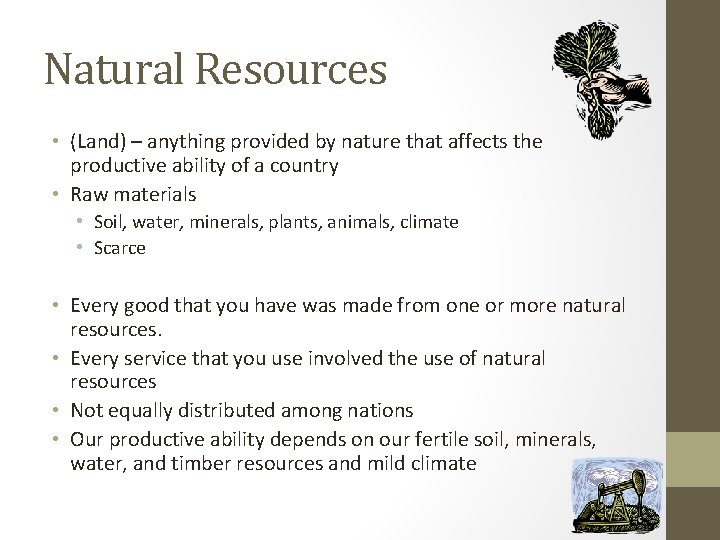 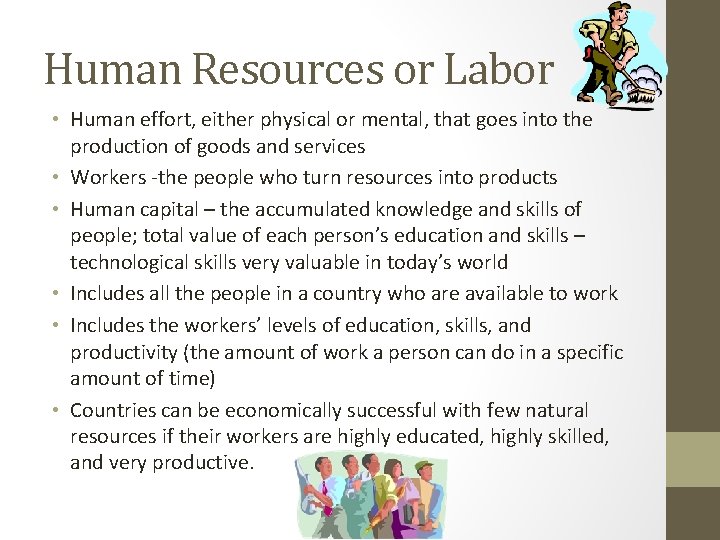 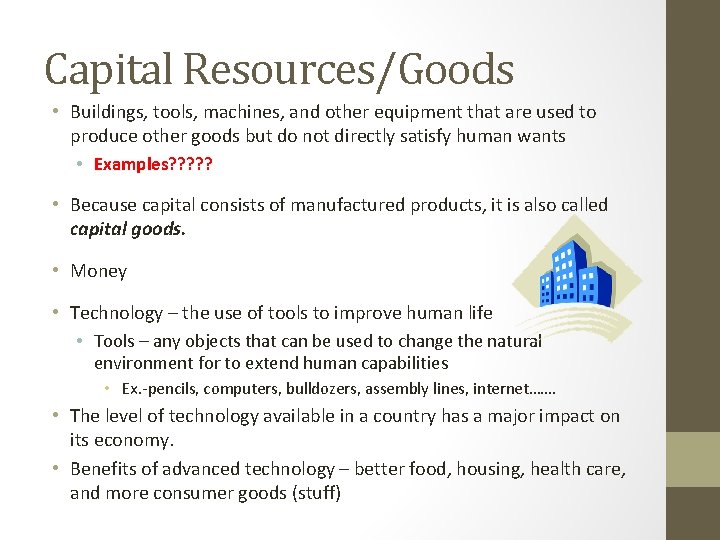 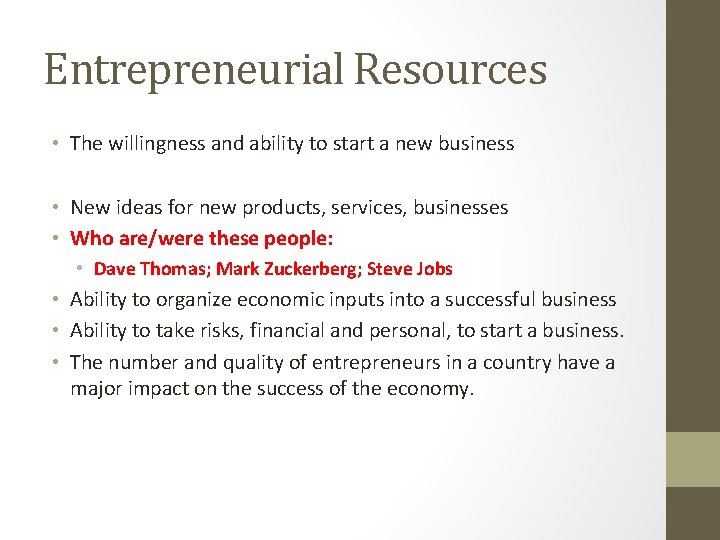 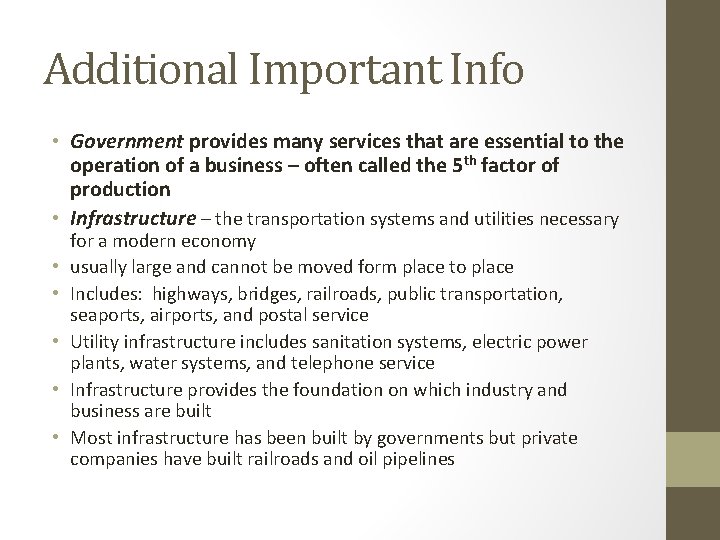 Economic Resources • Include everything that can be used to make products • All the ingredients used to make all the goods, services, and ideas produced in an economy • Think of a product you’re wearing now; • What economic resources were used to produce that good?

Goods, Services and Ideas • Good – a physical item, something you can touch • Examples… • Services – actions that are done for you • Examples… • Ideas – a concept, cause, issue, image, or philosophy that can be marketed • Examples……

Natural Resources • (Land) – anything provided by nature that affects the productive ability of a country • Raw materials • Soil, water, minerals, plants, animals, climate • Scarce • Every good that you have was made from one or more natural resources. • Every service that you use involved the use of natural resources • Not equally distributed among nations • Our productive ability depends on our fertile soil, minerals, water, and timber resources and mild climate

Human Resources or Labor • Human effort, either physical or mental, that goes into the production of goods and services • Workers -the people who turn resources into products • Human capital – the accumulated knowledge and skills of people; total value of each person’s education and skills – technological skills very valuable in today’s world • Includes all the people in a country who are available to work • Includes the workers’ levels of education, skills, and productivity (the amount of work a person can do in a specific amount of time) • Countries can be economically successful with few natural resources if their workers are highly educated, highly skilled, and very productive.

Capital Resources/Goods • Buildings, tools, machines, and other equipment that are used to produce other goods but do not directly satisfy human wants • Examples? ? ? • Because capital consists of manufactured products, it is also called capital goods. • Money • Technology – the use of tools to improve human life • Tools – any objects that can be used to change the natural environment for to extend human capabilities • Ex. -pencils, computers, bulldozers, assembly lines, internet……. • The level of technology available in a country has a major impact on its economy. • Benefits of advanced technology – better food, housing, health care, and more consumer goods (stuff)

Entrepreneurial Resources • The willingness and ability to start a new business • New ideas for new products, services, businesses • Who are/were these people: • Dave Thomas; Mark Zuckerberg; Steve Jobs • Ability to organize economic inputs into a successful business • Ability to take risks, financial and personal, to start a business. • The number and quality of entrepreneurs in a country have a major impact on the success of the economy.

Additional Important Info • Government provides many services that are essential to the operation of a business – often called the 5 th factor of production • Infrastructure – the transportation systems and utilities necessary • • • for a modern economy usually large and cannot be moved form place to place Includes: highways, bridges, railroads, public transportation, seaports, airports, and postal service Utility infrastructure includes sanitation systems, electric power plants, water systems, and telephone service Infrastructure provides the foundation on which industry and business are built Most infrastructure has been built by governments but private companies have built railroads and oil pipelines 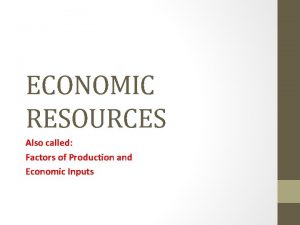 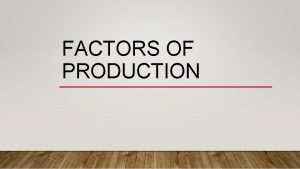 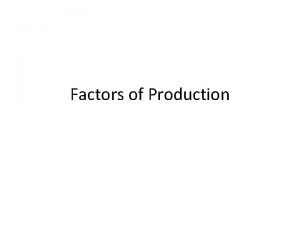 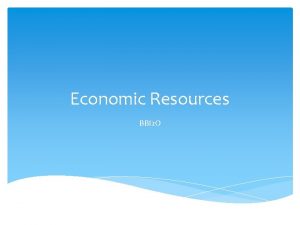 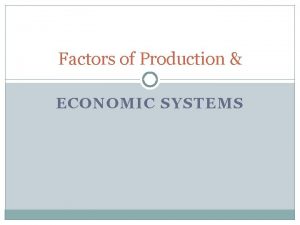 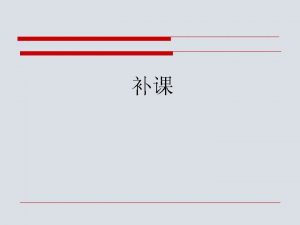 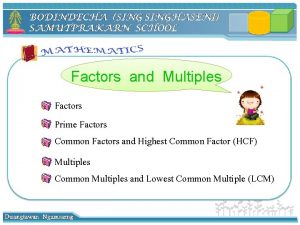 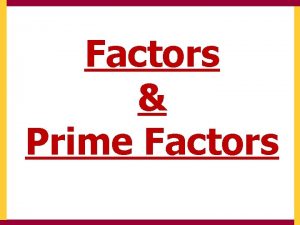