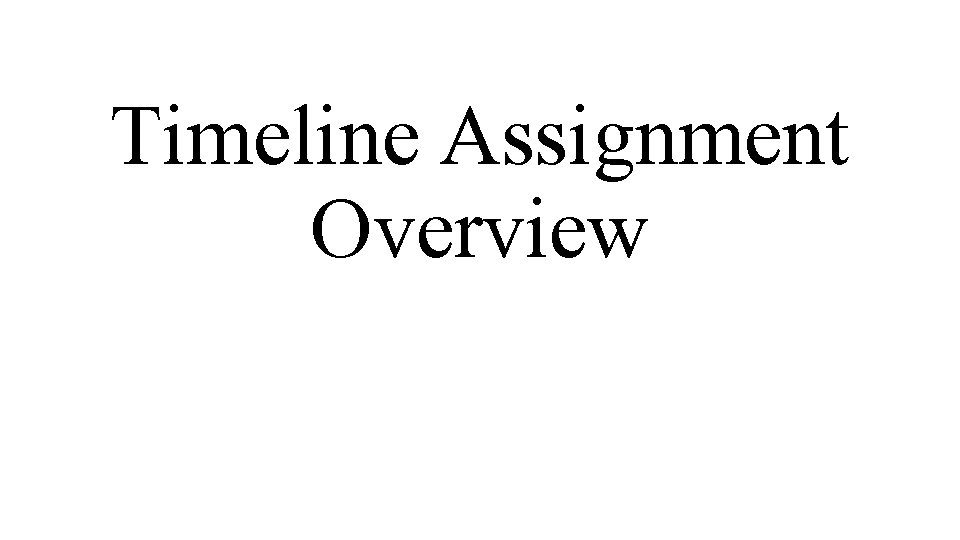 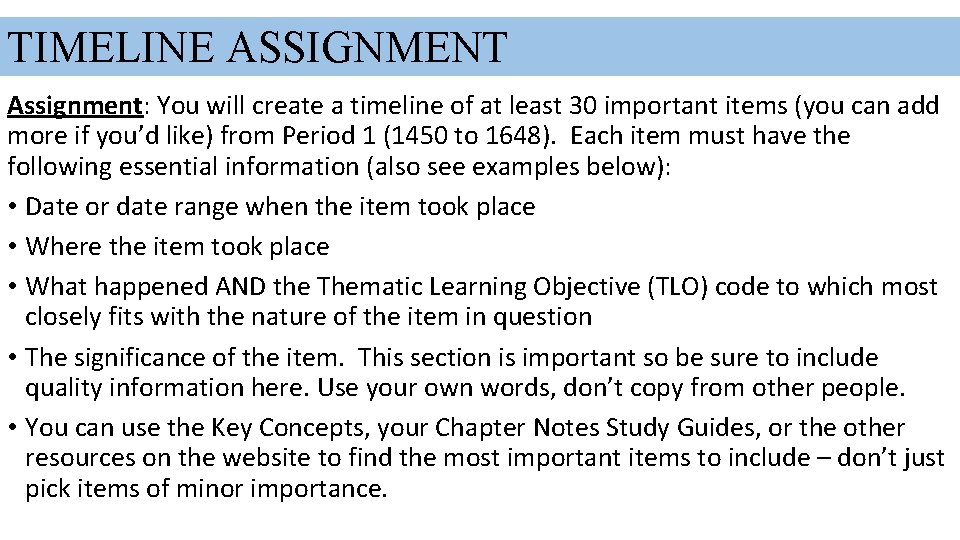 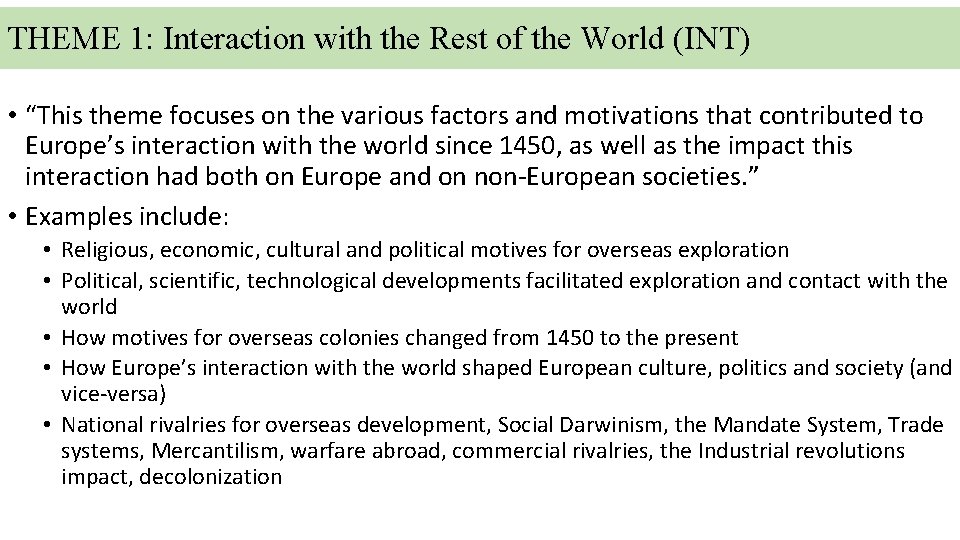 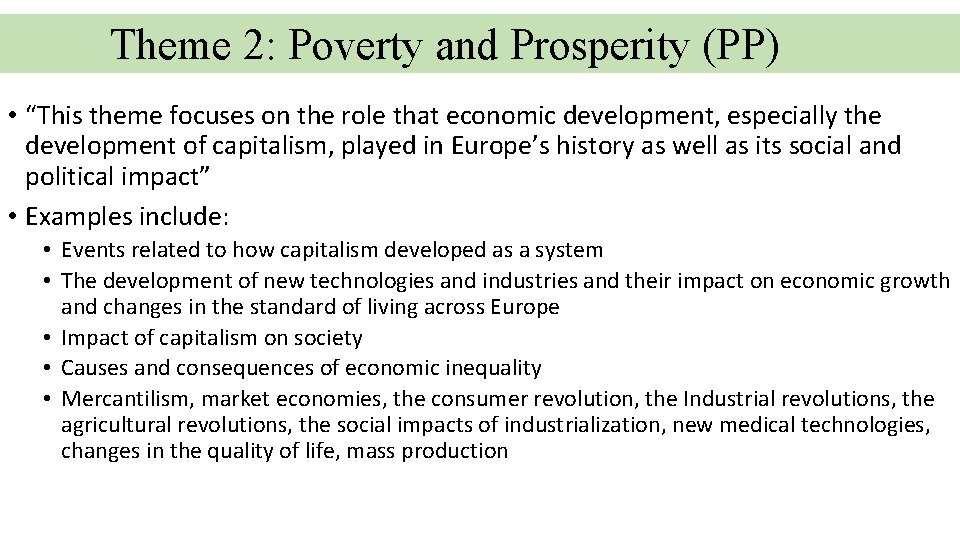 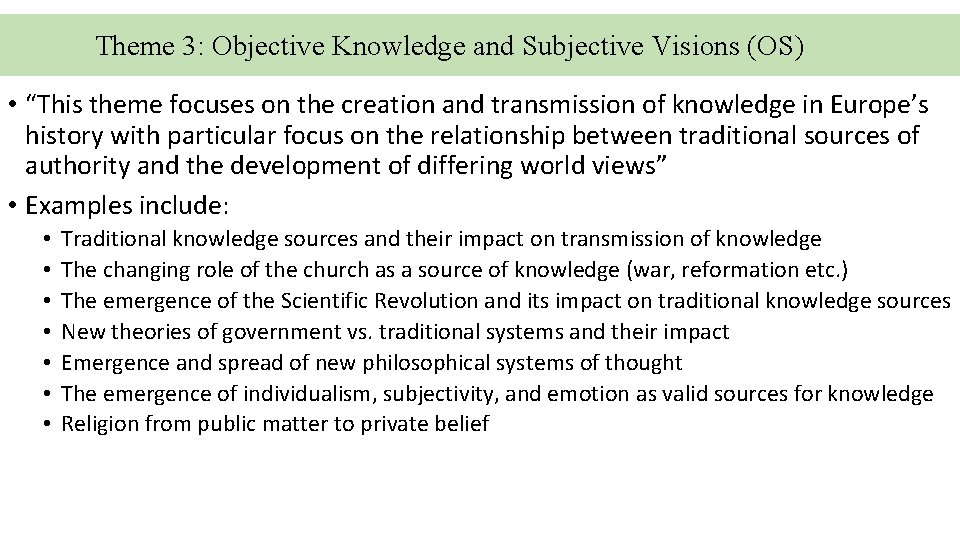 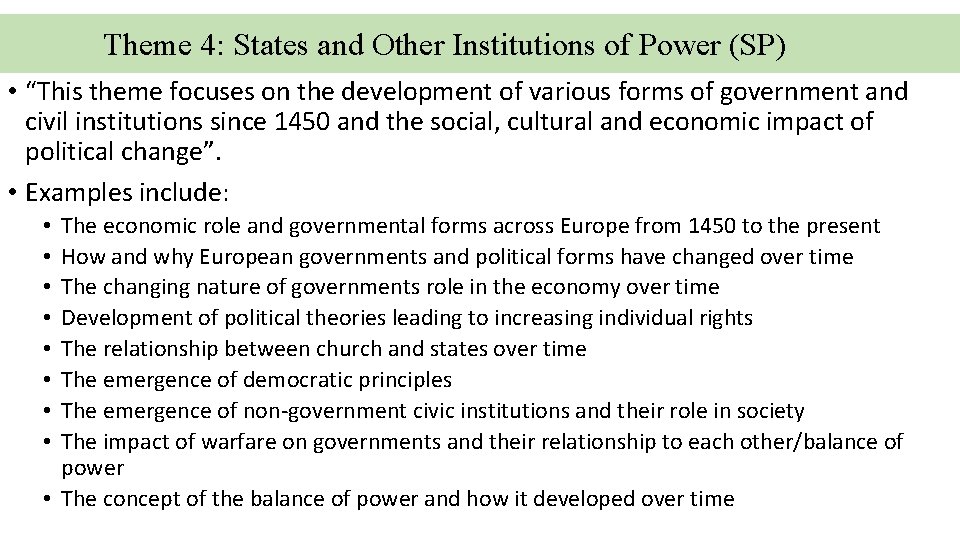 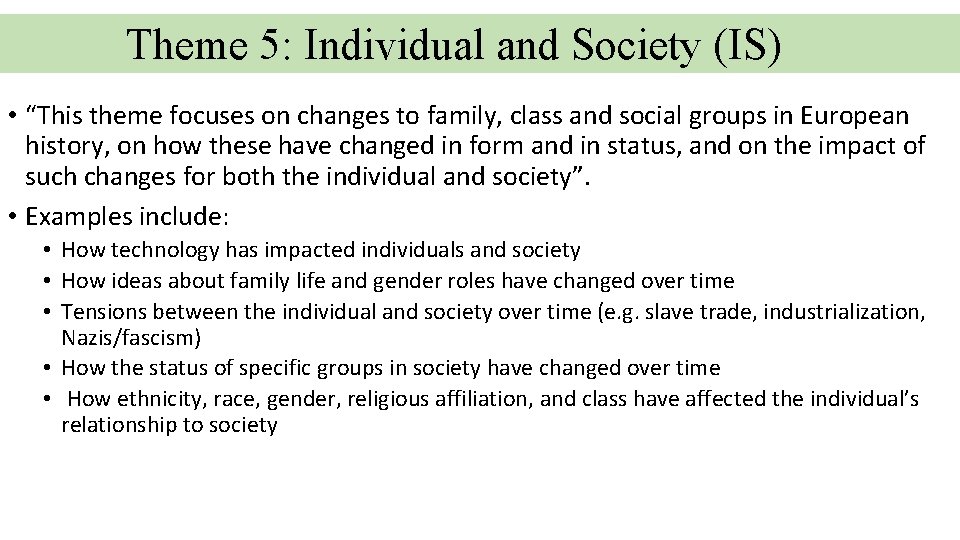 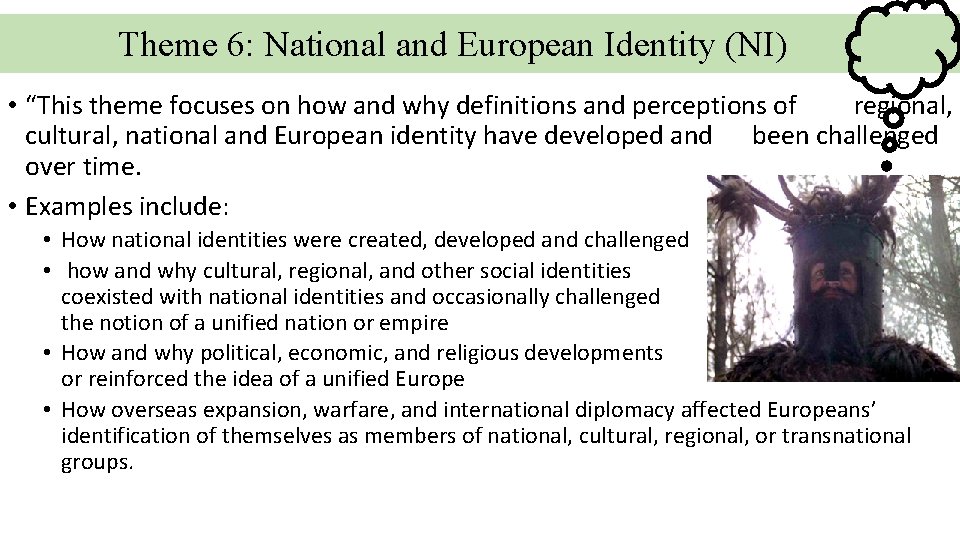 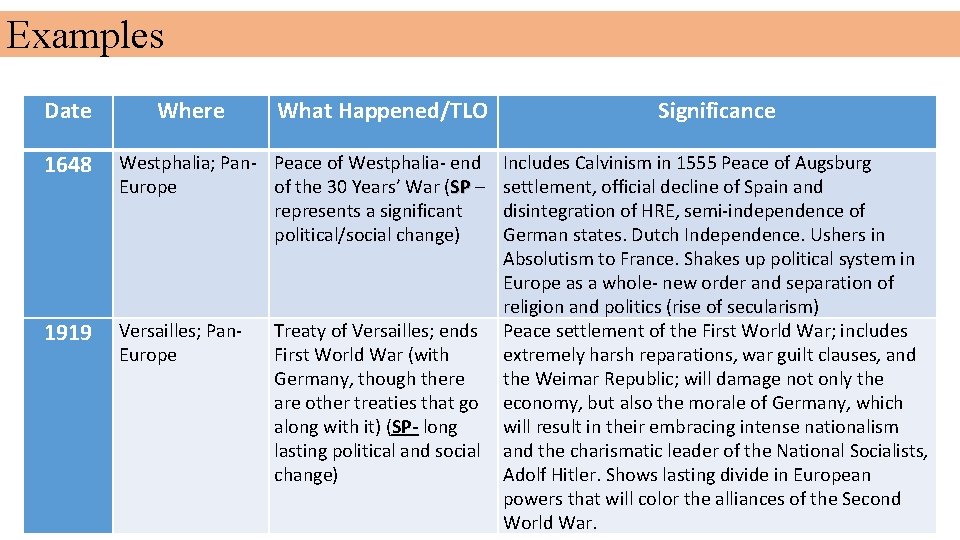 TIMELINE ASSIGNMENT Assignment: You will create a timeline of at least 30 important items (you can add more if you’d like) from Period 1 (1450 to 1648). Each item must have the following essential information (also see examples below): • Date or date range when the item took place • Where the item took place • What happened AND the Thematic Learning Objective (TLO) code to which most closely fits with the nature of the item in question • The significance of the item. This section is important so be sure to include quality information here. Use your own words, don’t copy from other people. • You can use the Key Concepts, your Chapter Notes Study Guides, or the other resources on the website to find the most important items to include – don’t just pick items of minor importance.

THEME 1: Interaction with the Rest of the World (INT) • “This theme focuses on the various factors and motivations that contributed to Europe’s interaction with the world since 1450, as well as the impact this interaction had both on Europe and on non-European societies. ” • Examples include: • Religious, economic, cultural and political motives for overseas exploration • Political, scientific, technological developments facilitated exploration and contact with the world • How motives for overseas colonies changed from 1450 to the present • How Europe’s interaction with the world shaped European culture, politics and society (and vice-versa) • National rivalries for overseas development, Social Darwinism, the Mandate System, Trade systems, Mercantilism, warfare abroad, commercial rivalries, the Industrial revolutions impact, decolonization

Theme 2: Poverty and Prosperity (PP) • “This theme focuses on the role that economic development, especially the development of capitalism, played in Europe’s history as well as its social and political impact” • Examples include: • Events related to how capitalism developed as a system • The development of new technologies and industries and their impact on economic growth and changes in the standard of living across Europe • Impact of capitalism on society • Causes and consequences of economic inequality • Mercantilism, market economies, the consumer revolution, the Industrial revolutions, the agricultural revolutions, the social impacts of industrialization, new medical technologies, changes in the quality of life, mass production

Theme 3: Objective Knowledge and Subjective Visions (OS) • “This theme focuses on the creation and transmission of knowledge in Europe’s history with particular focus on the relationship between traditional sources of authority and the development of differing world views” • Examples include: • • Traditional knowledge sources and their impact on transmission of knowledge The changing role of the church as a source of knowledge (war, reformation etc. ) The emergence of the Scientific Revolution and its impact on traditional knowledge sources New theories of government vs. traditional systems and their impact Emergence and spread of new philosophical systems of thought The emergence of individualism, subjectivity, and emotion as valid sources for knowledge Religion from public matter to private belief

Theme 4: States and Other Institutions of Power (SP) • “This theme focuses on the development of various forms of government and civil institutions since 1450 and the social, cultural and economic impact of political change”. • Examples include: The economic role and governmental forms across Europe from 1450 to the present How and why European governments and political forms have changed over time The changing nature of governments role in the economy over time Development of political theories leading to increasing individual rights The relationship between church and states over time The emergence of democratic principles The emergence of non-government civic institutions and their role in society The impact of warfare on governments and their relationship to each other/balance of power • The concept of the balance of power and how it developed over time • •

Theme 6: National and European Identity (NI) • “This theme focuses on how and why definitions and perceptions of regional, cultural, national and European identity have developed and been challenged over time. • Examples include: • How national identities were created, developed and challenged • how and why cultural, regional, and other social identities coexisted with national identities and occasionally challenged the notion of a unified nation or empire • How and why political, economic, and religious developments challenged or reinforced the idea of a unified Europe • How overseas expansion, warfare, and international diplomacy affected Europeans’ identification of themselves as members of national, cultural, regional, or transnational groups.

Examples Date Where What Happened/TLO 1648 Westphalia; Pan- Peace of Westphalia- end Europe of the 30 Years’ War (SP – represents a significant political/social change) 1919 Versailles; Pan. Europe Treaty of Versailles; ends First World War (with Germany, though there are other treaties that go along with it) (SP- long lasting political and social change) Significance Includes Calvinism in 1555 Peace of Augsburg settlement, official decline of Spain and disintegration of HRE, semi-independence of German states. Dutch Independence. Ushers in Absolutism to France. Shakes up political system in Europe as a whole- new order and separation of religion and politics (rise of secularism) Peace settlement of the First World War; includes extremely harsh reparations, war guilt clauses, and the Weimar Republic; will damage not only the economy, but also the morale of Germany, which will result in their embracing intense nationalism and the charismatic leader of the National Socialists, Adolf Hitler. Shows lasting divide in European powers that will color the alliances of the Second World War. 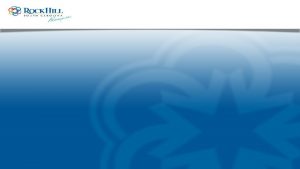 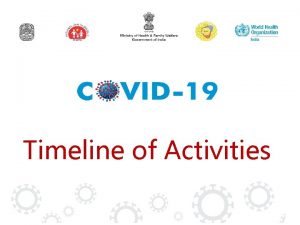 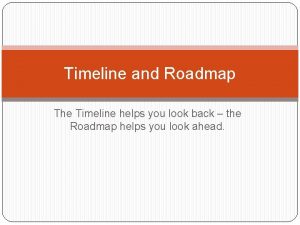 Timeline and Roadmap The Timeline helps you look 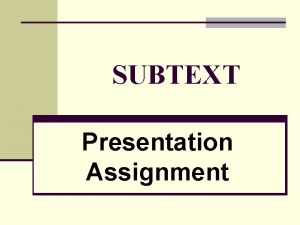 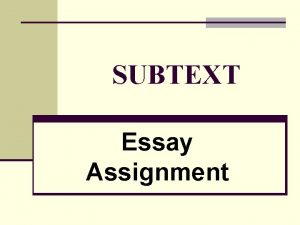 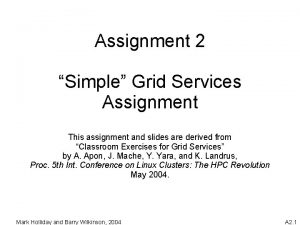 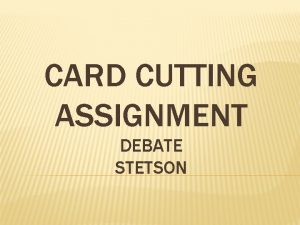 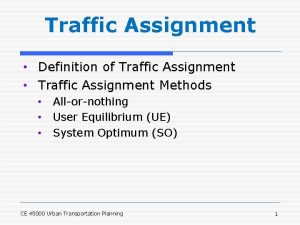