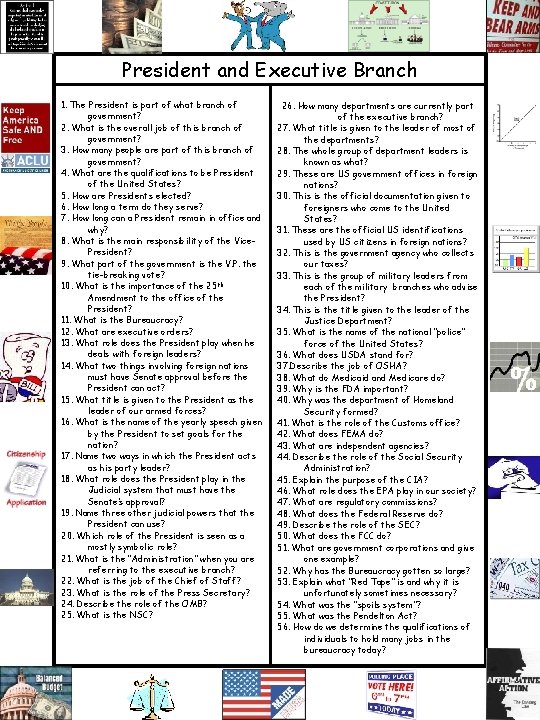 President and Executive Branch 1. The President is part of what branch of government? 2. What is the overall job of this branch of government? 3. How many people are part of this branch of government? 4. What are the qualifications to be President of the United States? 5. How are Presidents elected? 6. How long a term do they serve? 7. How long can a President remain in office and why? 8. What is the main responsibility of the Vice. President? 9. What part of the government is the V. P. the tie-breaking vote? 10. What is the importance of the 25 th Amendment to the office of the President? 11. What is the Bureaucracy? 12. What are executive orders? 13. What role does the President play when he deals with foreign leaders? 14. What two things involving foreign nations must have Senate approval before the President can act? 15. What title is given to the President as the leader of our armed forces? 16. What is the name of the yearly speech given by the President to set goals for the nation? 17. Name two ways in which the President acts as his party leader? 18. What role does the President play in the Judicial system that must have the Senate’s approval? 19. Name three other judicial powers that the President can use? 20. Which role of the President is seen as a mostly symbolic role? 21. What is the “Administration” when you are referring to the executive branch? 22. What is the job of the Chief of Staff? 23. What is the role of the Press Secretary? 24. Describe the role of the OMB? 25. What is the NSC? 26. How many departments are currently part of the executive branch? 27. What title is given to the leader of most of the departments? 28. The whole group of department leaders is known as what? 29. These are US government offices in foreign nations? 30. This is the official documentation given to foreigners who come to the United States? 31. These are the official US identifications used by US citizens in foreign nations? 32. This is the government agency who collects our taxes? 33. This is the group of military leaders from each of the military branches who advise the President? 34. This is the title given to the leader of the Justice Department? 35. What is the name of the national “police” force of the United States? 36. What does USDA stand for? 37. Describe the job of OSHA? 38. What do Medicaid and Medicare do? 39. Why is the FDA important? 40. Why was the department of Homeland Security formed? 41. What is the role of the Customs office? 42. What does FEMA do? 43. What are independent agencies? 44. Describe the role of the Social Security Administration? 45. Explain the purpose of the CIA? 46. What role does the EPA play in our society? 47. What are regulatory commissions? 48. What does the Federal Reserve do? 49. Describe the role of the SEC? 50. What does the FCC do? 51. What are government corporations and give one example? 52. Why has the Bureaucracy gotten so large? 53. Explain what “Red Tape” is and why it is unfortunately sometimes necessary? 54. What was the “spoils system”? 55. What was the Pendelton Act? 56. How do we determine the qualifications of individuals to hold many jobs in the bureaucracy today?