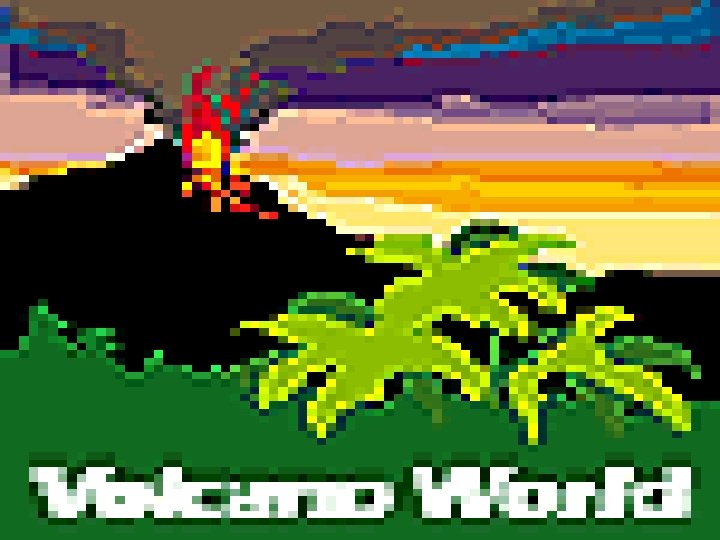 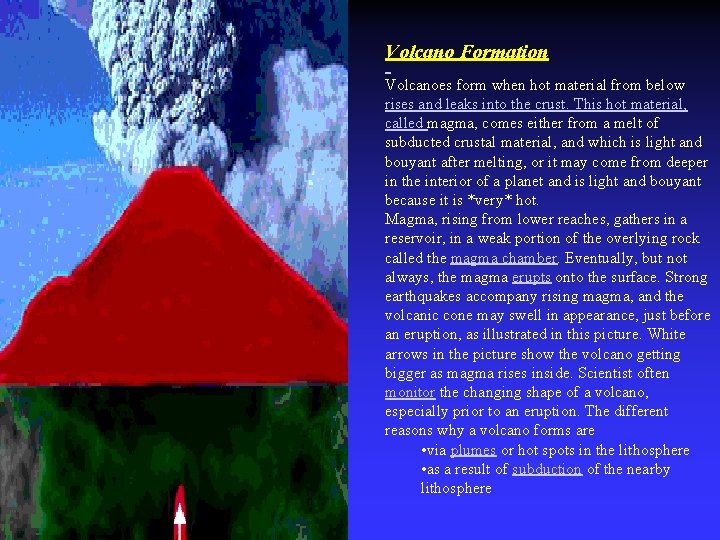 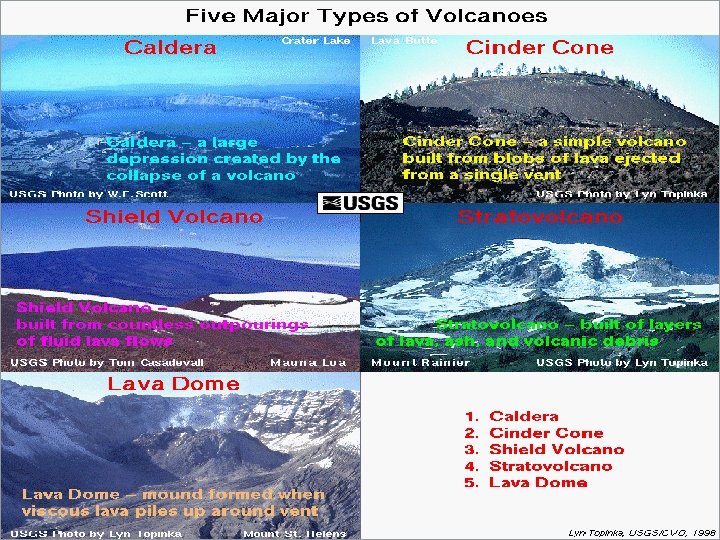 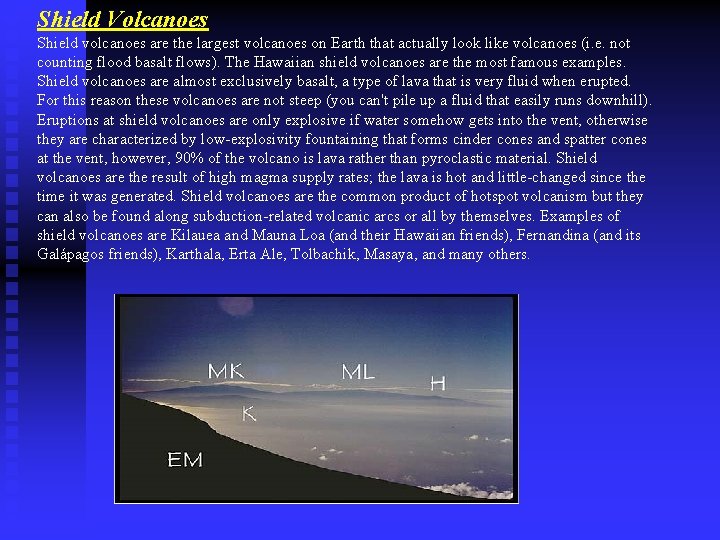 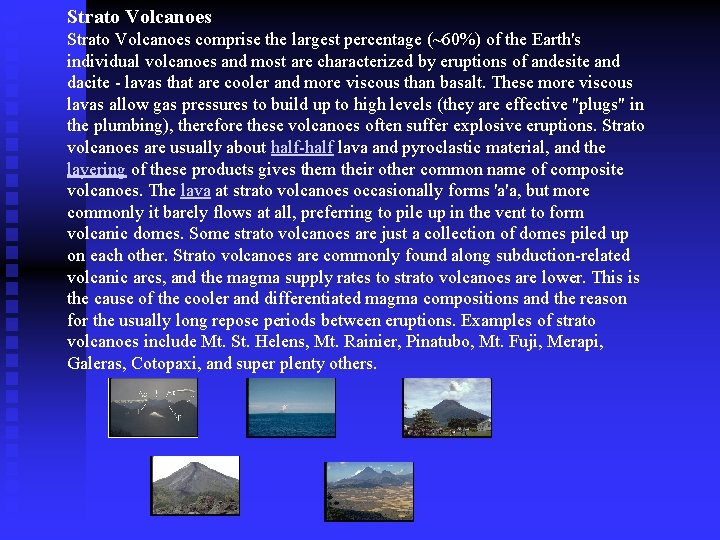 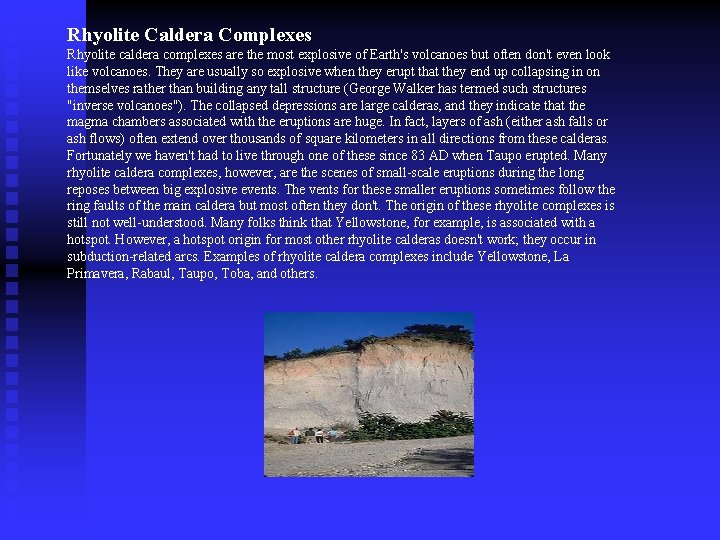 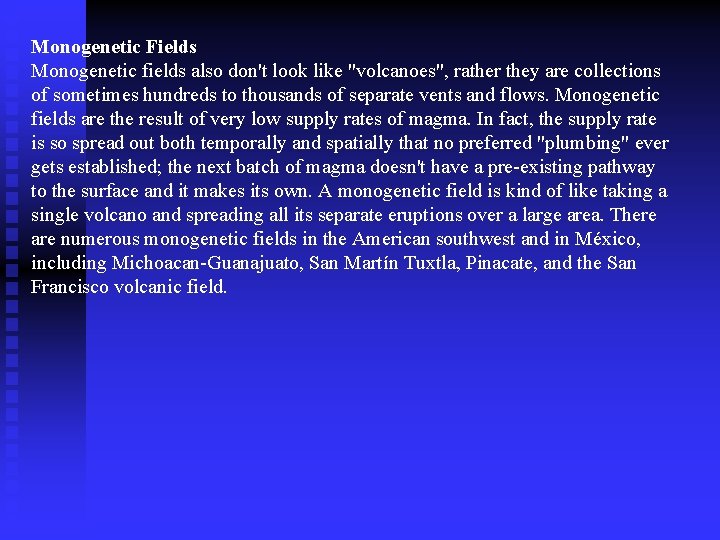 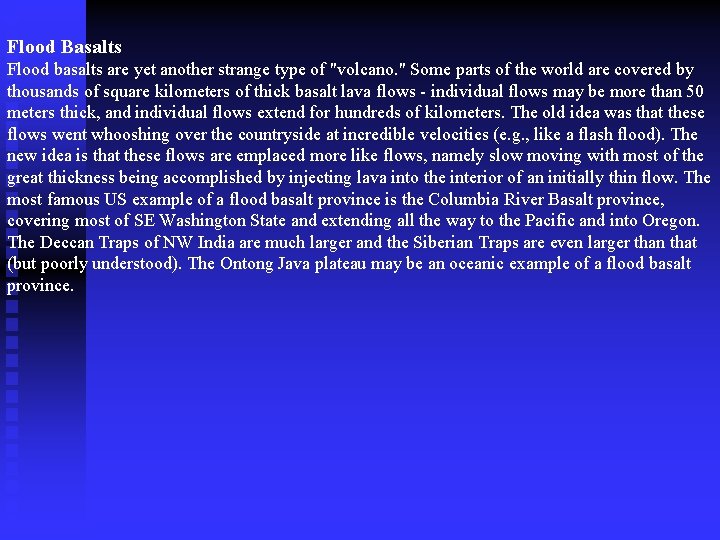 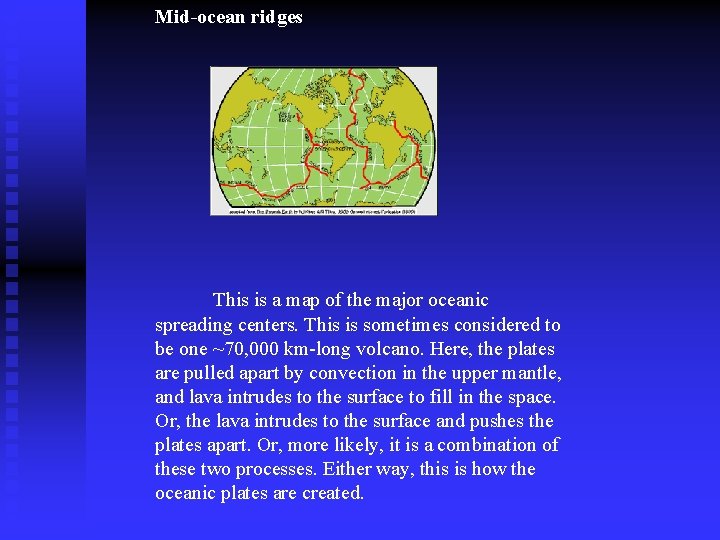 Volcano Formation Volcanoes form when hot material from below rises and leaks into the crust. This hot material, called magma, comes either from a melt of subducted crustal material, and which is light and bouyant after melting, or it may come from deeper in the interior of a planet and is light and bouyant because it is *very* hot. Magma, rising from lower reaches, gathers in a reservoir, in a weak portion of the overlying rock called the magma chamber. Eventually, but not always, the magma erupts onto the surface. Strong earthquakes accompany rising magma, and the volcanic cone may swell in appearance, just before an eruption, as illustrated in this picture. White arrows in the picture show the volcano getting bigger as magma rises inside. Scientist often monitor the changing shape of a volcano, especially prior to an eruption. The different reasons why a volcano forms are • via plumes or hot spots in the lithosphere • as a result of subduction of the nearby lithosphere

Strato Volcanoes comprise the largest percentage (~60%) of the Earth's individual volcanoes and most are characterized by eruptions of andesite and dacite - lavas that are cooler and more viscous than basalt. These more viscous lavas allow gas pressures to build up to high levels (they are effective "plugs" in the plumbing), therefore these volcanoes often suffer explosive eruptions. Strato volcanoes are usually about half-half lava and pyroclastic material, and the layering of these products gives them their other common name of composite volcanoes. The lava at strato volcanoes occasionally forms 'a'a, but more commonly it barely flows at all, preferring to pile up in the vent to form volcanic domes. Some strato volcanoes are just a collection of domes piled up on each other. Strato volcanoes are commonly found along subduction-related volcanic arcs, and the magma supply rates to strato volcanoes are lower. This is the cause of the cooler and differentiated magma compositions and the reason for the usually long repose periods between eruptions. Examples of strato volcanoes include Mt. St. Helens, Mt. Rainier, Pinatubo, Mt. Fuji, Merapi, Galeras, Cotopaxi, and super plenty others.

Rhyolite Caldera Complexes Rhyolite caldera complexes are the most explosive of Earth's volcanoes but often don't even look like volcanoes. They are usually so explosive when they erupt that they end up collapsing in on themselves rather than building any tall structure (George Walker has termed such structures "inverse volcanoes"). The collapsed depressions are large calderas, and they indicate that the magma chambers associated with the eruptions are huge. In fact, layers of ash (either ash falls or ash flows) often extend over thousands of square kilometers in all directions from these calderas. Fortunately we haven't had to live through one of these since 83 AD when Taupo erupted. Many rhyolite caldera complexes, however, are the scenes of small-scale eruptions during the long reposes between big explosive events. The vents for these smaller eruptions sometimes follow the ring faults of the main caldera but most often they don't. The origin of these rhyolite complexes is still not well-understood. Many folks think that Yellowstone, for example, is associated with a hotspot. However, a hotspot origin for most other rhyolite calderas doesn't work; they occur in subduction-related arcs. Examples of rhyolite caldera complexes include Yellowstone, La Primavera, Rabaul, Taupo, Toba, and others.

Monogenetic Fields Monogenetic fields also don't look like "volcanoes", rather they are collections of sometimes hundreds to thousands of separate vents and flows. Monogenetic fields are the result of very low supply rates of magma. In fact, the supply rate is so spread out both temporally and spatially that no preferred "plumbing" ever gets established; the next batch of magma doesn't have a pre-existing pathway to the surface and it makes its own. A monogenetic field is kind of like taking a single volcano and spreading all its separate eruptions over a large area. There are numerous monogenetic fields in the American southwest and in México, including Michoacan-Guanajuato, San Martín Tuxtla, Pinacate, and the San Francisco volcanic field.

Flood Basalts Flood basalts are yet another strange type of "volcano. " Some parts of the world are covered by thousands of square kilometers of thick basalt lava flows - individual flows may be more than 50 meters thick, and individual flows extend for hundreds of kilometers. The old idea was that these flows went whooshing over the countryside at incredible velocities (e. g. , like a flash flood). The new idea is that these flows are emplaced more like flows, namely slow moving with most of the great thickness being accomplished by injecting lava into the interior of an initially thin flow. The most famous US example of a flood basalt province is the Columbia River Basalt province, covering most of SE Washington State and extending all the way to the Pacific and into Oregon. The Deccan Traps of NW India are much larger and the Siberian Traps are even larger than that (but poorly understood). The Ontong Java plateau may be an oceanic example of a flood basalt province.

Mid-ocean ridges This is a map of the major oceanic spreading centers. This is sometimes considered to be one ~70, 000 km-long volcano. Here, the plates are pulled apart by convection in the upper mantle, and lava intrudes to the surface to fill in the space. Or, the lava intrudes to the surface and pushes the plates apart. Or, more likely, it is a combination of these two processes. Either way, this is how the oceanic plates are created. 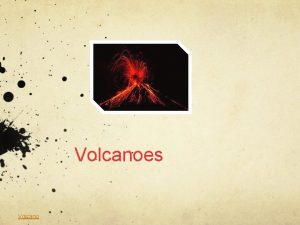 Volcanoes Volcano What is a volcano A volcano 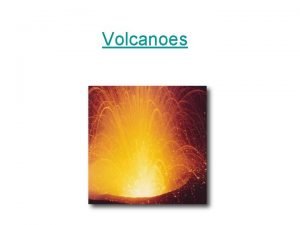 Volcanoes How Volcanoes Form volcano a mountain that 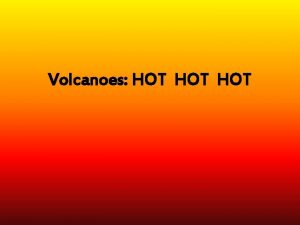 Volcanoes HOT HOT What is a Volcano A 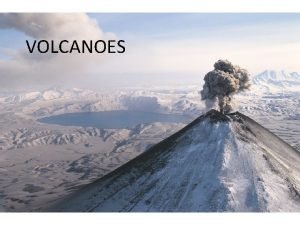 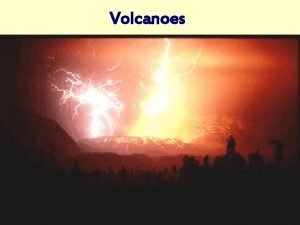 Volcanoes What is a volcano A volcano is 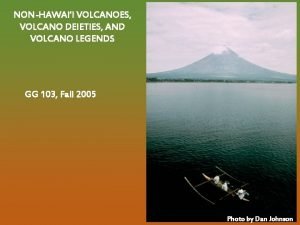 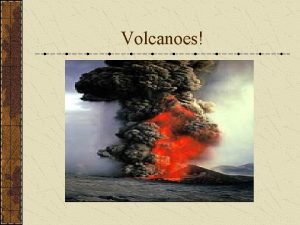 Volcanoes What is a Volcano Volcano a mountain 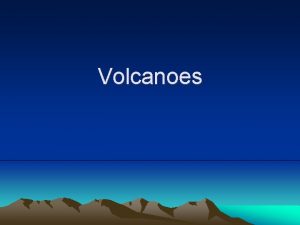 Volcanoes Volcano Volcano is a weak spot in