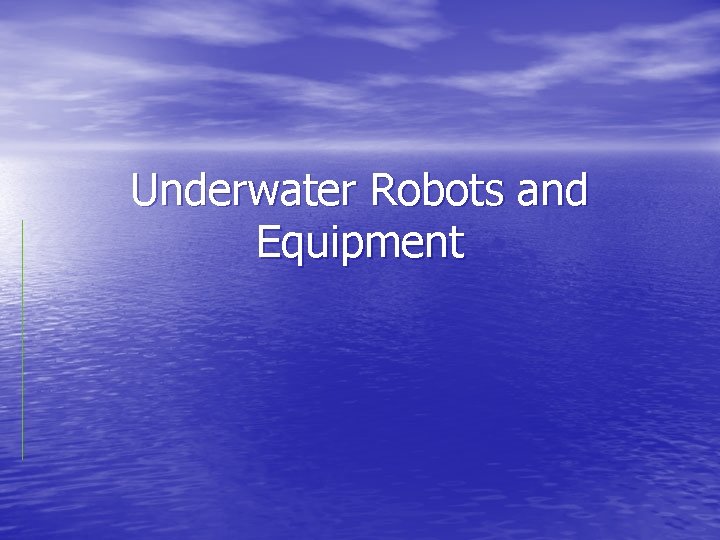 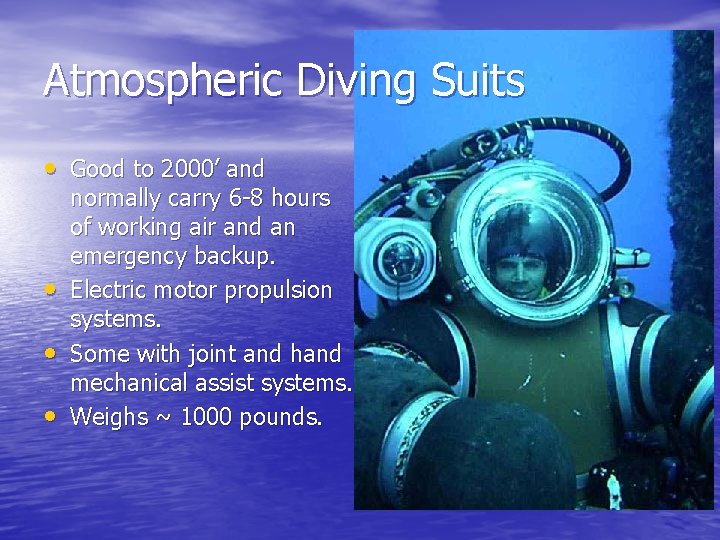 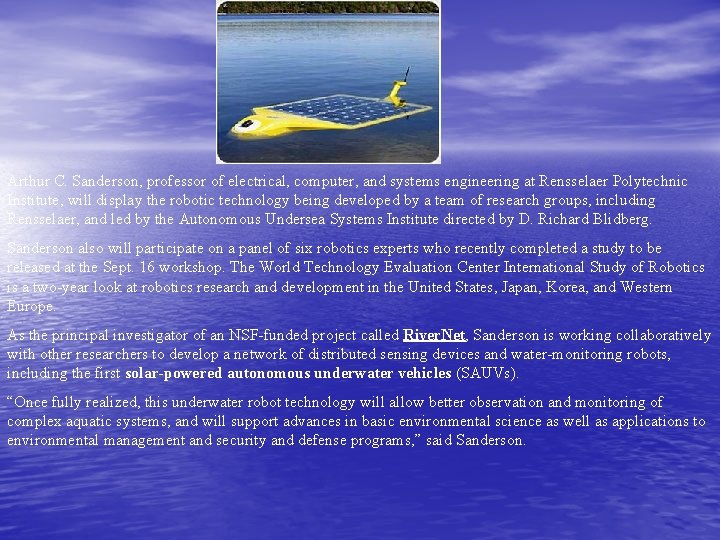 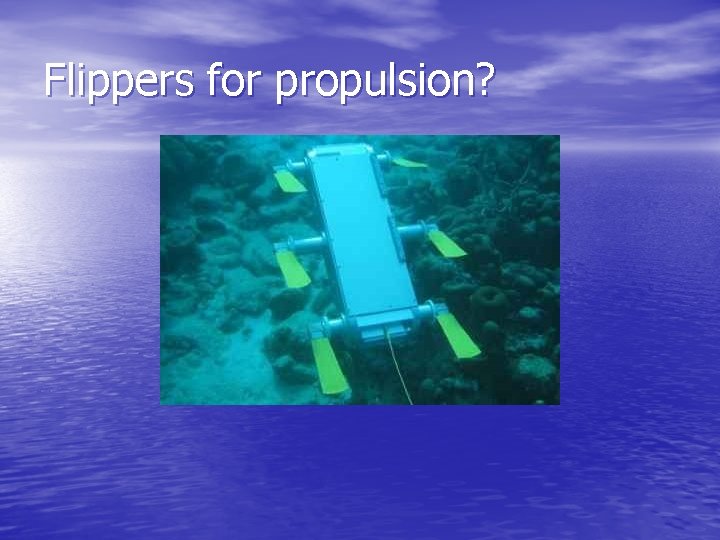 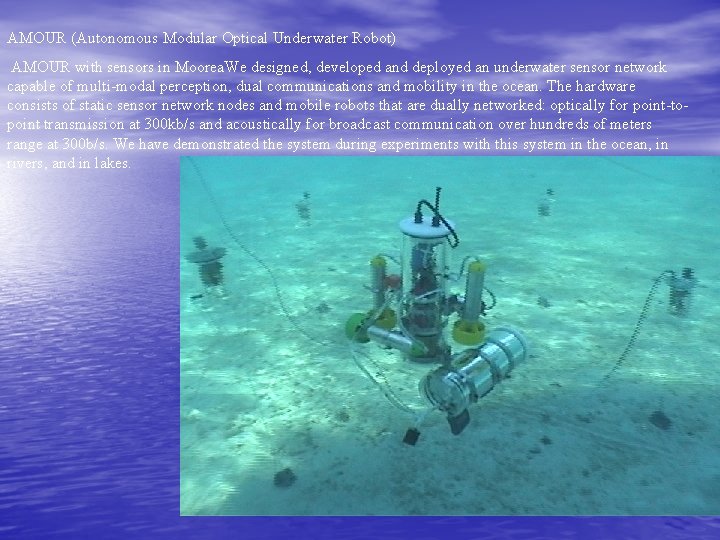 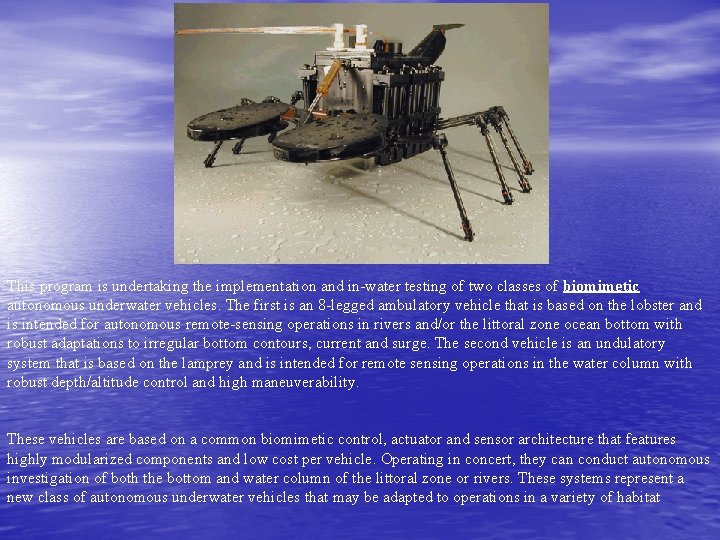 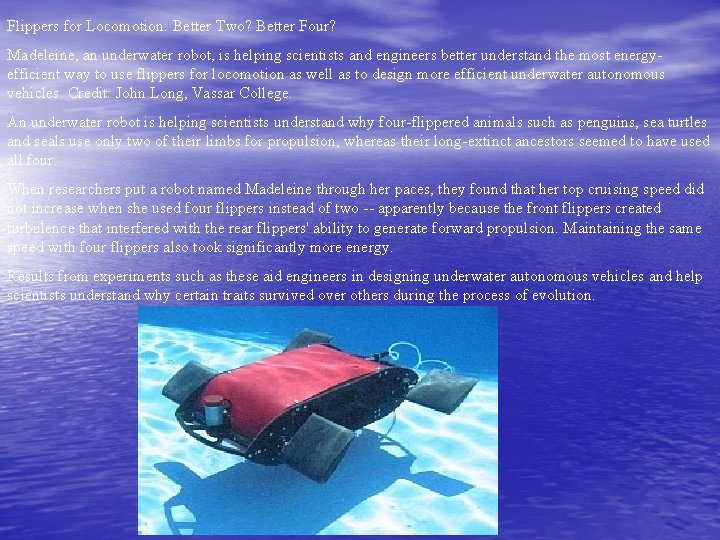 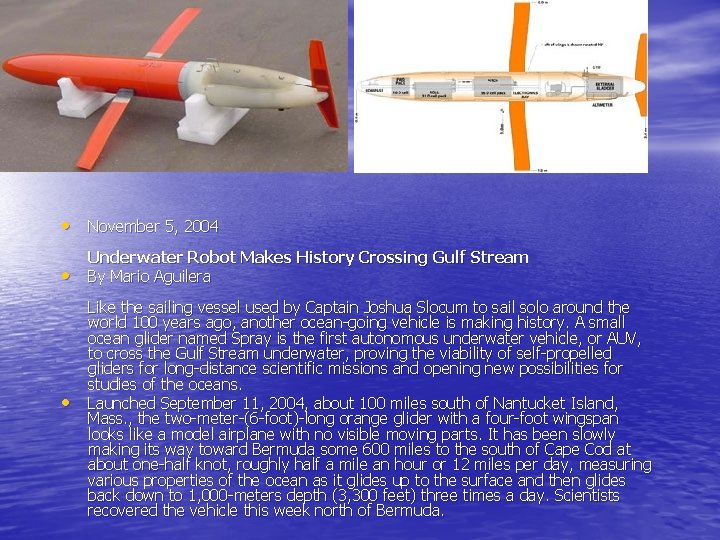 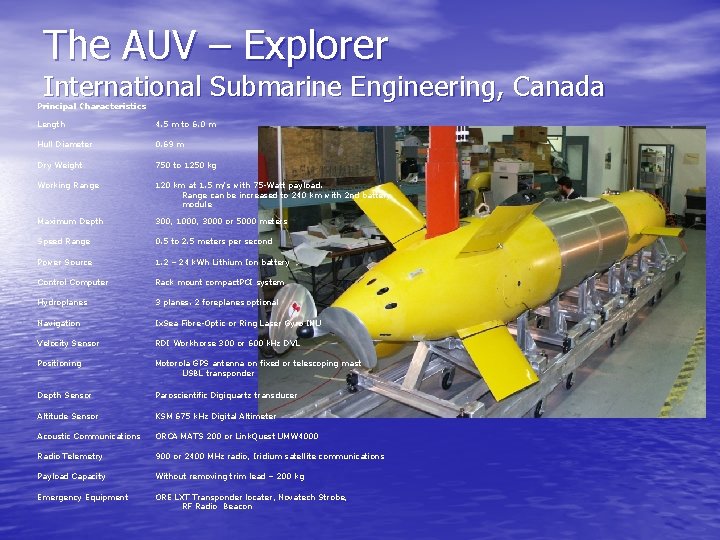 Arthur C. Sanderson, professor of electrical, computer, and systems engineering at Rensselaer Polytechnic Institute, will display the robotic technology being developed by a team of research groups, including Rensselaer, and led by the Autonomous Undersea Systems Institute directed by D. Richard Blidberg. Sanderson also will participate on a panel of six robotics experts who recently completed a study to be released at the Sept. 16 workshop. The World Technology Evaluation Center International Study of Robotics is a two-year look at robotics research and development in the United States, Japan, Korea, and Western Europe. As the principal investigator of an NSF-funded project called River. Net, Sanderson is working collaboratively with other researchers to develop a network of distributed sensing devices and water-monitoring robots, including the first solar-powered autonomous underwater vehicles (SAUVs). “Once fully realized, this underwater robot technology will allow better observation and monitoring of complex aquatic systems, and will support advances in basic environmental science as well as applications to environmental management and security and defense programs, ” said Sanderson.

AMOUR (Autonomous Modular Optical Underwater Robot) AMOUR with sensors in Moorea. We designed, developed and deployed an underwater sensor network capable of multi-modal perception, dual communications and mobility in the ocean. The hardware consists of static sensor network nodes and mobile robots that are dually networked: optically for point-topoint transmission at 300 kb/s and acoustically for broadcast communication over hundreds of meters range at 300 b/s. We have demonstrated the system during experiments with this system in the ocean, in rivers, and in lakes.

This program is undertaking the implementation and in-water testing of two classes of biomimetic autonomous underwater vehicles. The first is an 8 -legged ambulatory vehicle that is based on the lobster and is intended for autonomous remote-sensing operations in rivers and/or the littoral zone ocean bottom with robust adaptations to irregular bottom contours, current and surge. The second vehicle is an undulatory system that is based on the lamprey and is intended for remote sensing operations in the water column with robust depth/altitude control and high maneuverability. These vehicles are based on a common biomimetic control, actuator and sensor architecture that features highly modularized components and low cost per vehicle. Operating in concert, they can conduct autonomous investigation of both the bottom and water column of the littoral zone or rivers. These systems represent a new class of autonomous underwater vehicles that may be adapted to operations in a variety of habitat

Flippers for Locomotion: Better Two? Better Four? Madeleine, an underwater robot, is helping scientists and engineers better understand the most energyefficient way to use flippers for locomotion as well as to design more efficient underwater autonomous vehicles. Credit: John Long, Vassar College. An underwater robot is helping scientists understand why four-flippered animals such as penguins, sea turtles and seals use only two of their limbs for propulsion, whereas their long-extinct ancestors seemed to have used all four. When researchers put a robot named Madeleine through her paces, they found that her top cruising speed did not increase when she used four flippers instead of two -- apparently because the front flippers created turbulence that interfered with the rear flippers' ability to generate forward propulsion. Maintaining the same speed with four flippers also took significantly more energy. Results from experiments such as these aid engineers in designing underwater autonomous vehicles and help scientists understand why certain traits survived over others during the process of evolution.

• November 5, 2004 • • Underwater Robot Makes History Crossing Gulf Stream By Mario Aguilera Like the sailing vessel used by Captain Joshua Slocum to sail solo around the world 100 years ago, another ocean-going vehicle is making history. A small ocean glider named Spray is the first autonomous underwater vehicle, or AUV, to cross the Gulf Stream underwater, proving the viability of self-propelled gliders for long-distance scientific missions and opening new possibilities for studies of the oceans. Launched September 11, 2004, about 100 miles south of Nantucket Island, Mass. , the two-meter-(6 -foot)-long orange glider with a four-foot wingspan looks like a model airplane with no visible moving parts. It has been slowly making its way toward Bermuda some 600 miles to the south of Cape Cod at about one-half knot, roughly half a mile an hour or 12 miles per day, measuring various properties of the ocean as it glides up to the surface and then glides back down to 1, 000 -meters depth (3, 300 feet) three times a day. Scientists recovered the vehicle this week north of Bermuda. 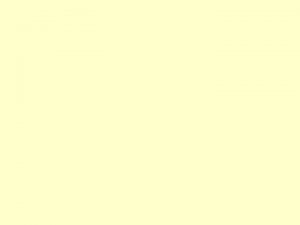 DEVELOPMENTS IN UNDERWATER DIVING People have been diving 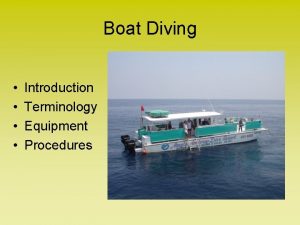 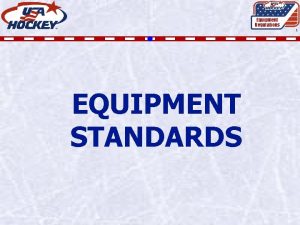 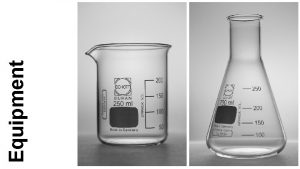 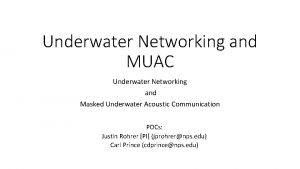 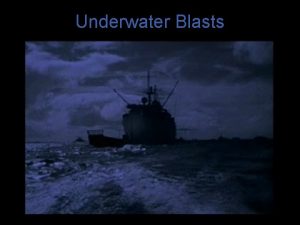 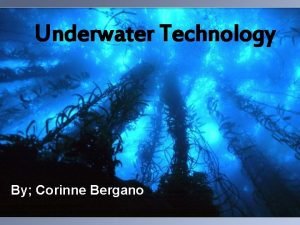 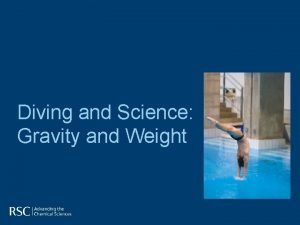 Diving and Science Gravity and Weight Diving is