“The Raven” Introduction • “The Raven” was first published in the New York Evening Mirror on January 29, 1845 and received popular and critical praise • The speaker, a man who pines for his deceased love, Lenore, has been visited by a talking bird who knows only the word, “Nevermore” • The narrator feels so grieved over the loss of his love that he allows his imagination to transform the bird into a prophet bringing news that the lovers will “Nevermore” be reunited, not even in heaven • Poe describes the poem as one that reveals the human penchant for “self-torture” as evidenced by the speaker’s tendency to weigh himself down with grief

Style in “The Raven” • Poe claims to have given much thought to his selection of the refrain, recognizing in it the “pivot upon which the whole structure might turn” • His selection of the word “Nevermore” came after considering his need for a single, easily remembered word that would allow him to vary the meaning of the lines leading up to it • The stanzas become increasingly dramatic as the speaker makes observations or asks questions that reveal his growing tension and diminishing reason • The narrator begins with innocent and amusing remarks that build in a steady crescendo to intense expressions of grief, all of which conclude with “Nevermore” or one of its variants

Form, Meter, and Rhyme • The poem is composed of eighteen stanzas of six lines each • Rhyme Scheme- ABCBBB • Contains Internal Rhyme (rhyming within a line of poetry) in the first and third lines of each stanza • Meter (Rhythm)-Trochaic Octameter • The first and third lines have a set meter known as Trochaic Octameter-- sixteen syllables grouped into pairs (called feet) that have a pattern of stressed and unstressed syllables

• The second, forth, and fifth lines only have fifteen syllables ending with an “or” sound that stands on its own • The sixth (last line) has seven syllables • Alliteration (Consonance)- the repetition of consonant sounds, usually at the beginning of words • “She Sells Sea Shells down by the Seashore” • Assonance- the repetition of vowel sounds, usually within words • “What large, dark hands are those at the window/Grasping in the golden light. . . ” 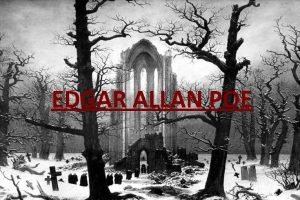 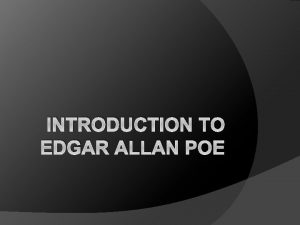 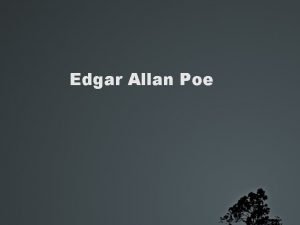