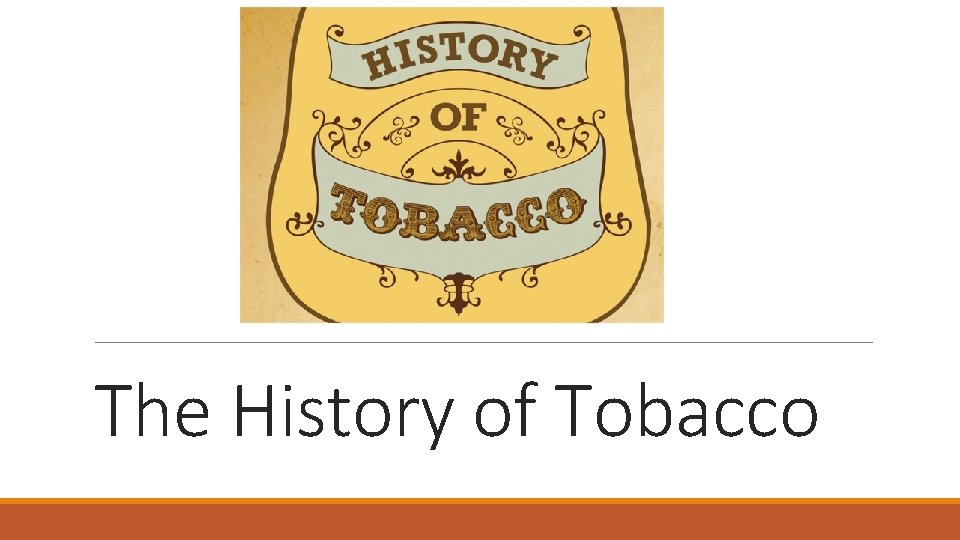 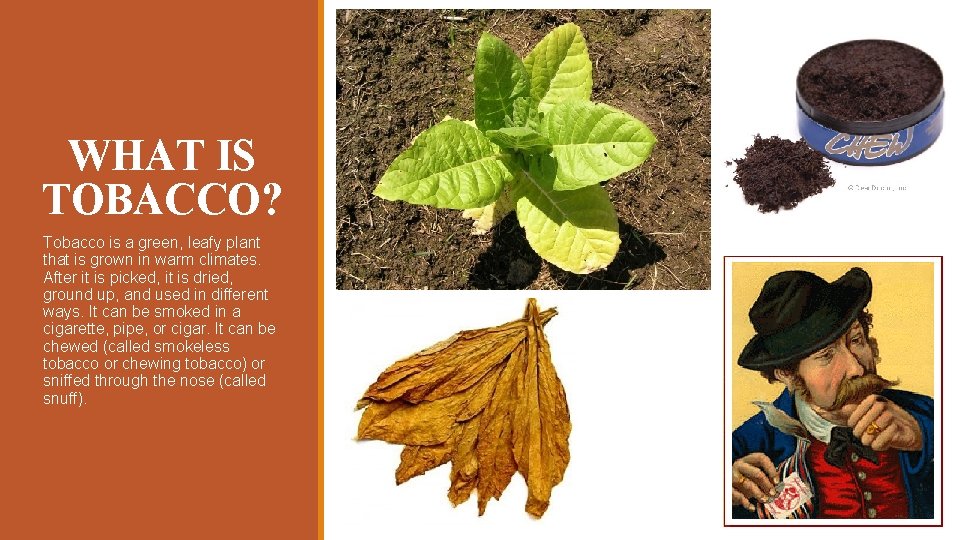 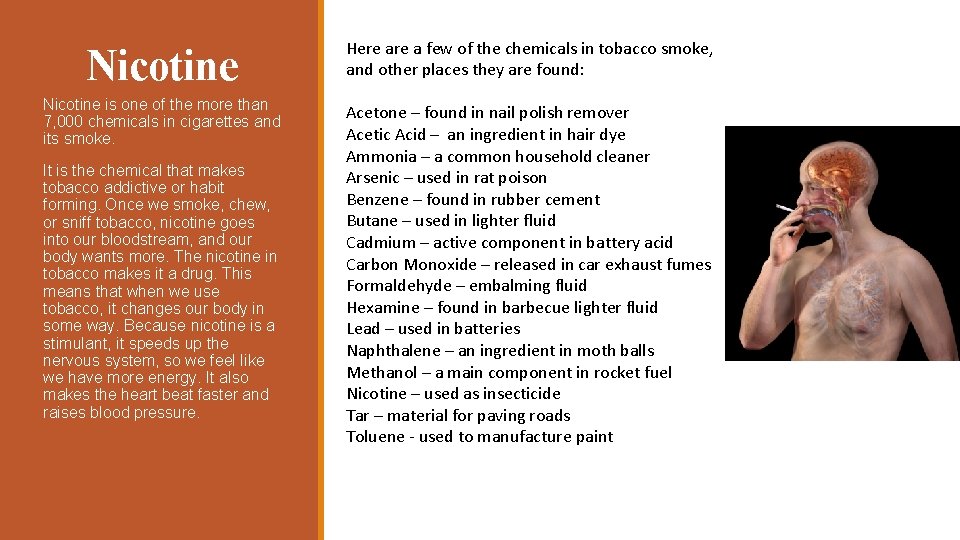 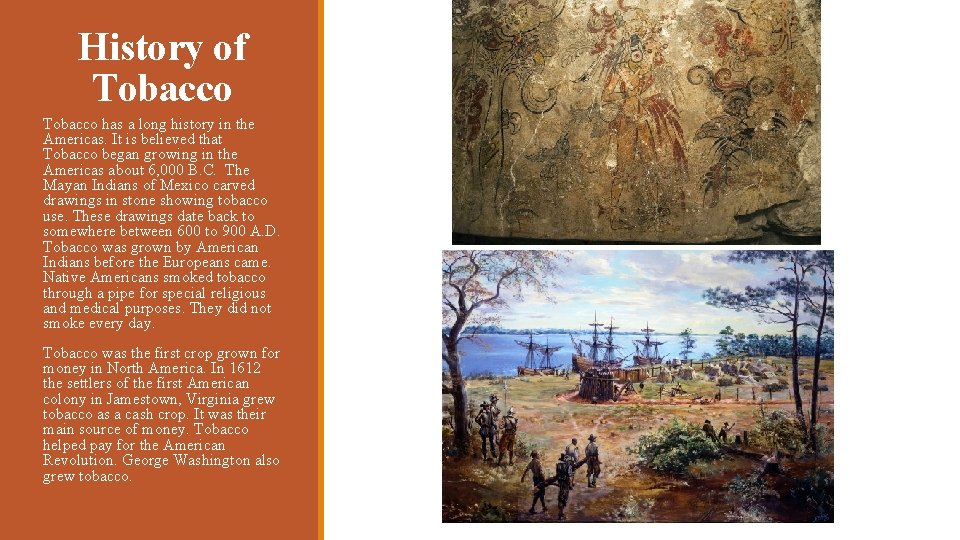 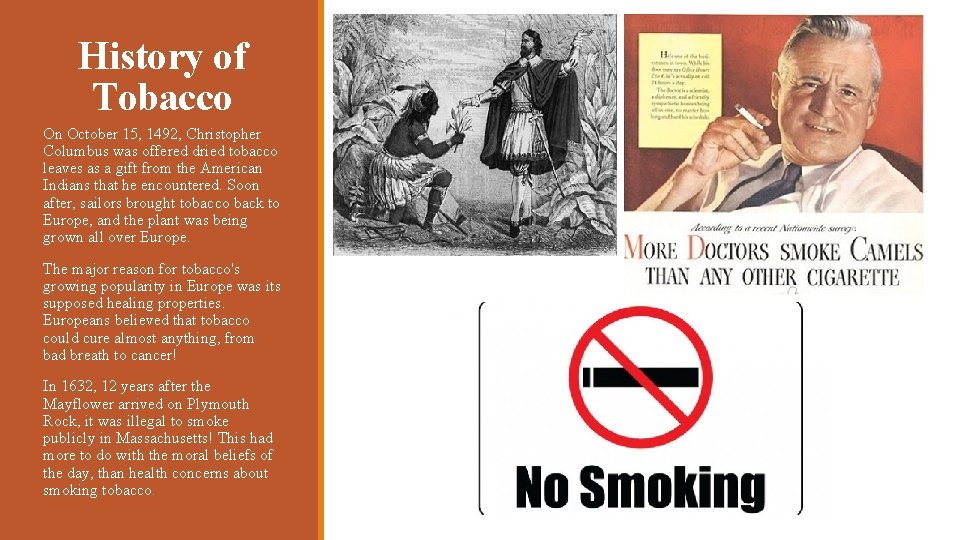 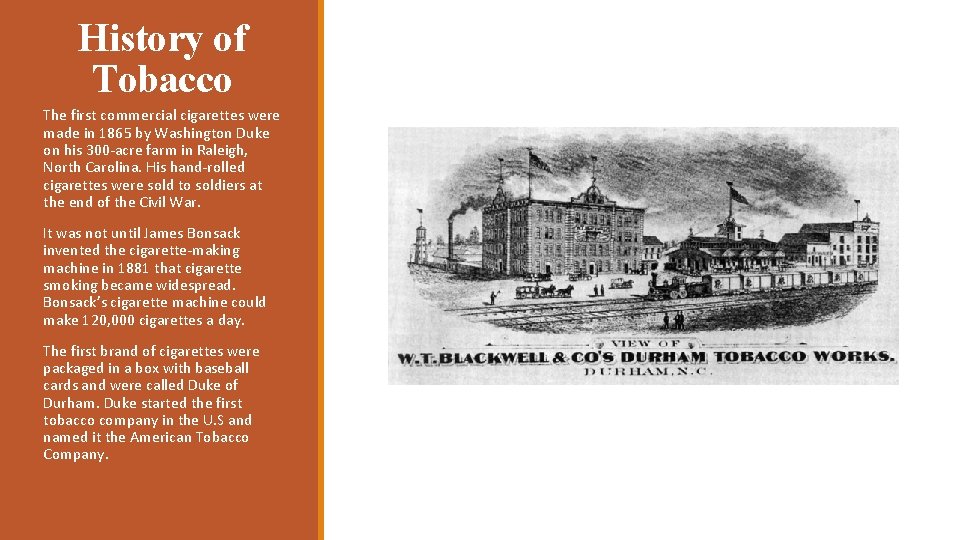 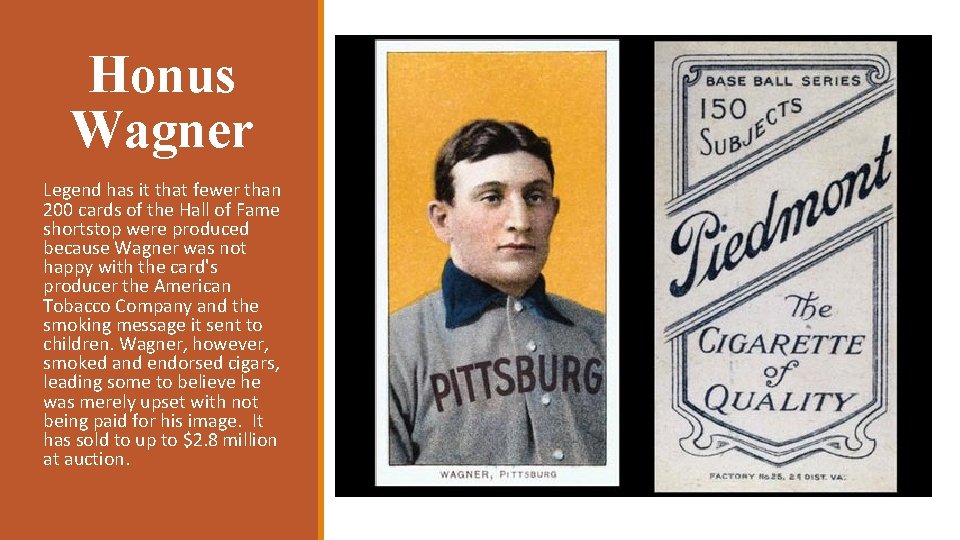 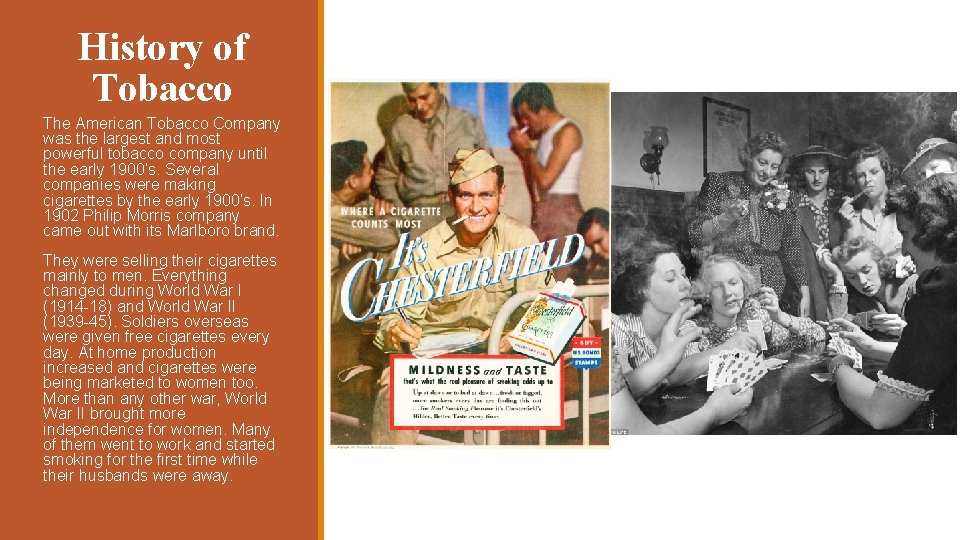 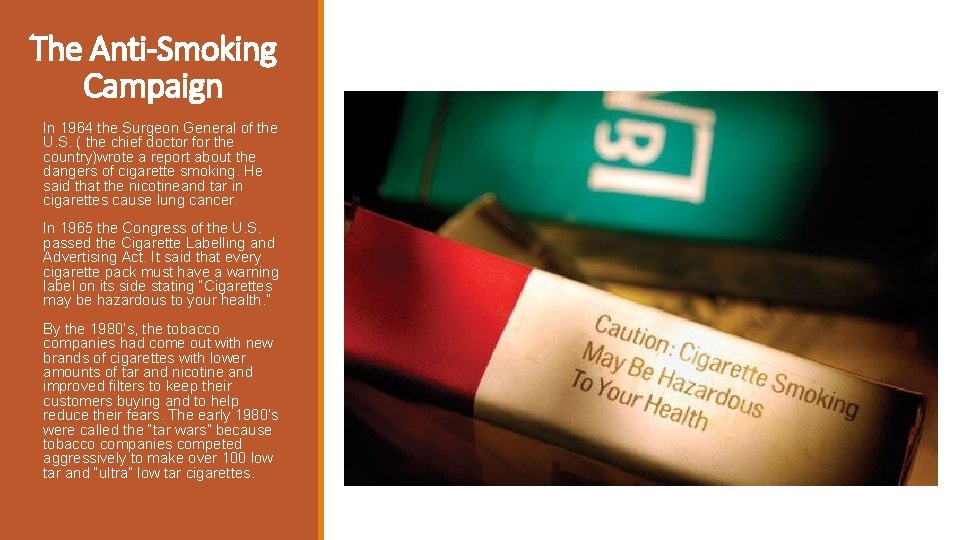 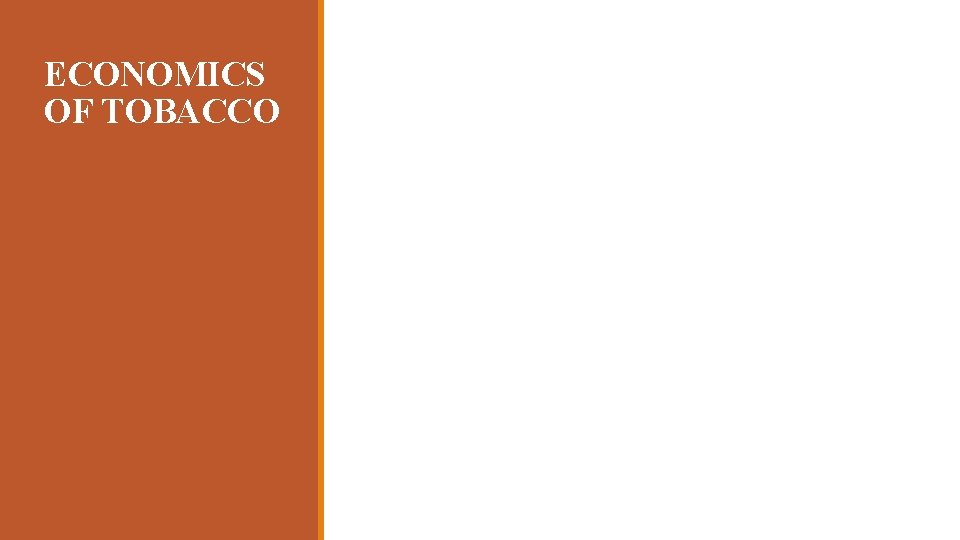 The History of Tobacco

WHAT IS TOBACCO? Tobacco is a green, leafy plant that is grown in warm climates. After it is picked, it is dried, ground up, and used in different ways. It can be smoked in a cigarette, pipe, or cigar. It can be chewed (called smokeless tobacco or chewing tobacco) or sniffed through the nose (called snuff).

Nicotine Here a few of the chemicals in tobacco smoke, and other places they are found: Nicotine is one of the more than 7, 000 chemicals in cigarettes and its smoke. Acetone – found in nail polish remover Acetic Acid – an ingredient in hair dye Ammonia – a common household cleaner Arsenic – used in rat poison Benzene – found in rubber cement Butane – used in lighter fluid Cadmium – active component in battery acid Carbon Monoxide – released in car exhaust fumes Formaldehyde – embalming fluid Hexamine – found in barbecue lighter fluid Lead – used in batteries Naphthalene – an ingredient in moth balls Methanol – a main component in rocket fuel Nicotine – used as insecticide Tar – material for paving roads Toluene - used to manufacture paint It is the chemical that makes tobacco addictive or habit forming. Once we smoke, chew, or sniff tobacco, nicotine goes into our bloodstream, and our body wants more. The nicotine in tobacco makes it a drug. This means that when we use tobacco, it changes our body in some way. Because nicotine is a stimulant, it speeds up the nervous system, so we feel like we have more energy. It also makes the heart beat faster and raises blood pressure.

History of Tobacco has a long history in the Americas. It is believed that Tobacco began growing in the Americas about 6, 000 B. C. The Mayan Indians of Mexico carved drawings in stone showing tobacco use. These drawings date back to somewhere between 600 to 900 A. D. Tobacco was grown by American Indians before the Europeans came. Native Americans smoked tobacco through a pipe for special religious and medical purposes. They did not smoke every day. Tobacco was the first crop grown for money in North America. In 1612 the settlers of the first American colony in Jamestown, Virginia grew tobacco as a cash crop. It was their main source of money. Tobacco helped pay for the American Revolution. George Washington also grew tobacco.

History of Tobacco On October 15, 1492, Christopher Columbus was offered dried tobacco leaves as a gift from the American Indians that he encountered. Soon after, sailors brought tobacco back to Europe, and the plant was being grown all over Europe. The major reason for tobacco's growing popularity in Europe was its supposed healing properties. Europeans believed that tobacco could cure almost anything, from bad breath to cancer! In 1632, 12 years after the Mayflower arrived on Plymouth Rock, it was illegal to smoke publicly in Massachusetts! This had more to do with the moral beliefs of the day, than health concerns about smoking tobacco.

History of Tobacco The first commercial cigarettes were made in 1865 by Washington Duke on his 300 -acre farm in Raleigh, North Carolina. His hand-rolled cigarettes were sold to soldiers at the end of the Civil War. It was not until James Bonsack invented the cigarette-making machine in 1881 that cigarette smoking became widespread. Bonsack’s cigarette machine could make 120, 000 cigarettes a day. The first brand of cigarettes were packaged in a box with baseball cards and were called Duke of Durham. Duke started the first tobacco company in the U. S and named it the American Tobacco Company.

Honus Wagner Legend has it that fewer than 200 cards of the Hall of Fame shortstop were produced because Wagner was not happy with the card's producer the American Tobacco Company and the smoking message it sent to children. Wagner, however, smoked and endorsed cigars, leading some to believe he was merely upset with not being paid for his image. It has sold to up to $2. 8 million at auction.

History of Tobacco The American Tobacco Company was the largest and most powerful tobacco company until the early 1900’s. Several companies were making cigarettes by the early 1900’s. In 1902 Philip Morris company came out with its Marlboro brand. They were selling their cigarettes mainly to men. Everything changed during World War I (1914 -18) and World War II (1939 -45). Soldiers overseas were given free cigarettes every day. At home production increased and cigarettes were being marketed to women too. More than any other war, World War II brought more independence for women. Many of them went to work and started smoking for the first time while their husbands were away.

The Anti-Smoking Campaign In 1964 the Surgeon General of the U. S. ( the chief doctor for the country)wrote a report about the dangers of cigarette smoking. He said that the nicotineand tar in cigarettes cause lung cancer. In 1965 the Congress of the U. S. passed the Cigarette Labelling and Advertising Act. It said that every cigarette pack must have a warning label on its side stating “Cigarettes may be hazardous to your health. ” By the 1980’s, the tobacco companies had come out with new brands of cigarettes with lower amounts of tar and nicotine and improved filters to keep their customers buying and to help reduce their fears. The early 1980’s were called the “tar wars” because tobacco companies competed aggressively to make over 100 low tar and “ultra” low tar cigarettes. 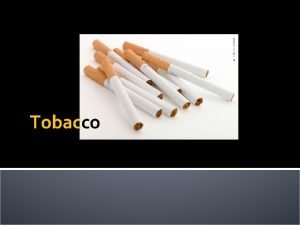 Tobacco Tobacco What is tobacco a preparation of 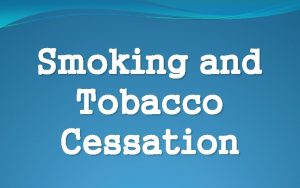 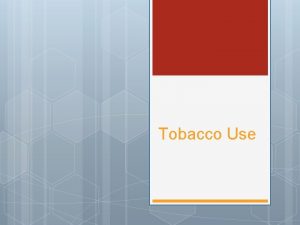 Tobacco Use Whats in Tobacco Tobacco contains many 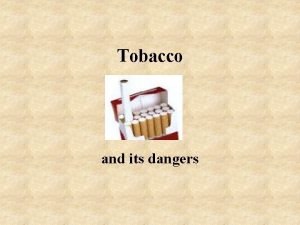 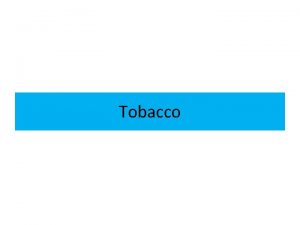 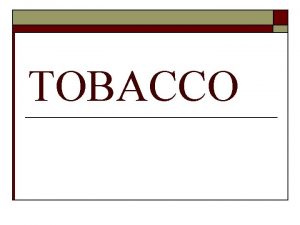 TOBACCO What is tobacco o Tobacco is a 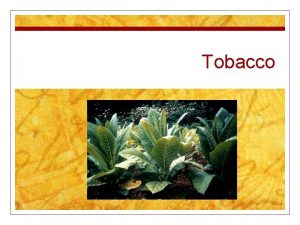 Tobacco What is Tobacco n Tobacco starts as 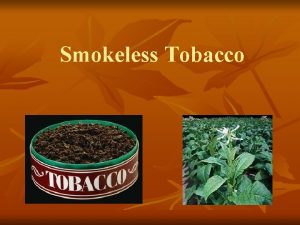 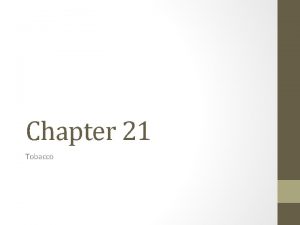