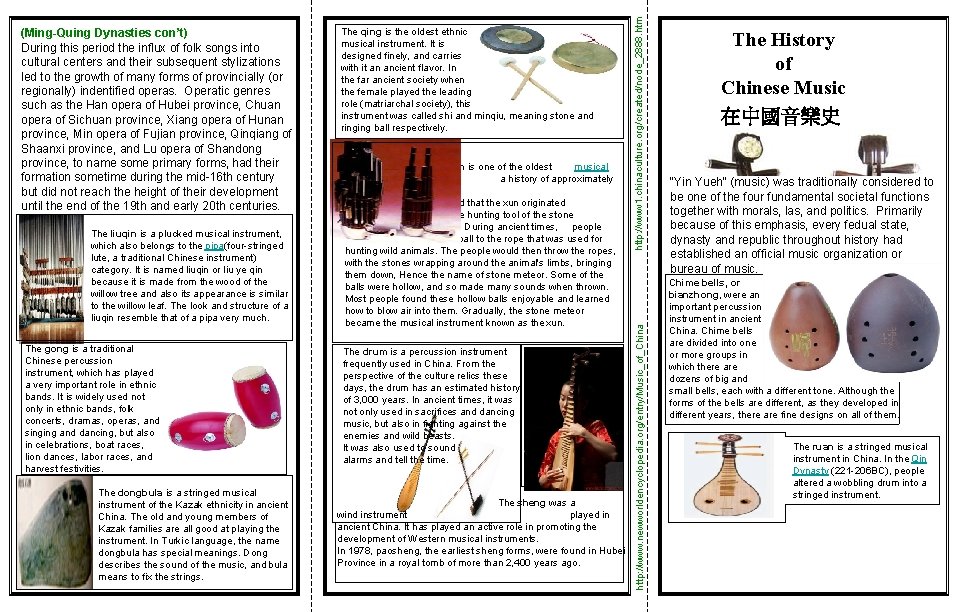 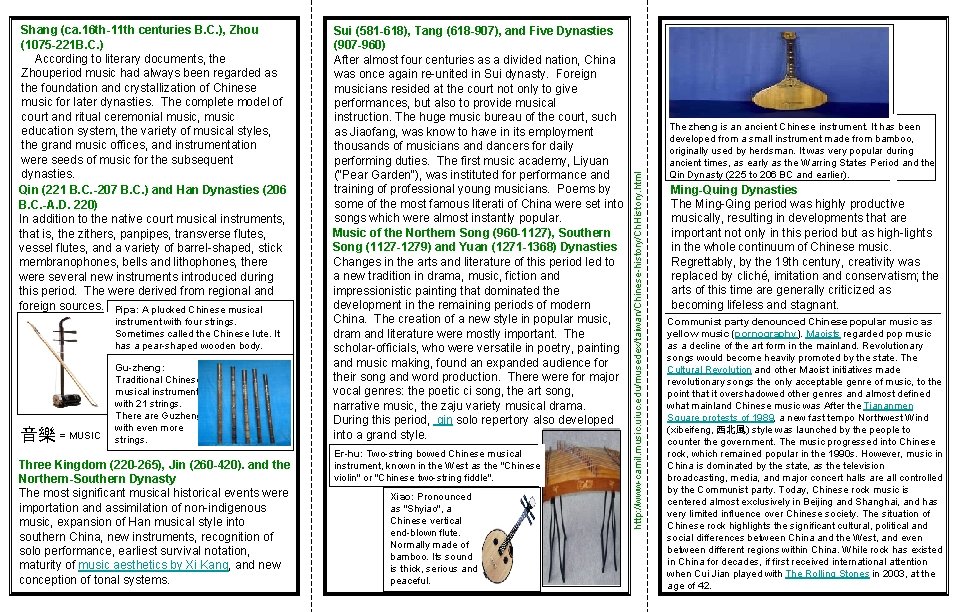 The gong is a traditional Chinese percussion instrument, which has played a very important role in ethnic bands. It is widely used not only in ethnic bands, folk concerts, dramas, operas, and singing and dancing, but also in celebrations, boat races, lion dances, labor races, and harvest festivities. The dongbula is a stringed musical instrument of the Kazak ethnicity in ancient China. The old and young members of Kazak families are all good at playing the instrument. In Turkic language, the name dongbula has special meanings. Dong describes the sound of the music, and bula means to fix the strings. The xun is one of the oldest musical instruments in China, with a history of approximately 7, 000 years. It is said that the xun originated from the hunting tool of the stone meteor. During ancient times, people often tied a stone or mud ball to the rope that was used for hunting wild animals. The people would then throw the ropes, with the stones wrapping around the animal's limbs, bringing them down, Hence the name of stone meteor. Some of the balls were hollow, and so made many sounds when thrown. Most people found these hollow balls enjoyable and learned how to blow air into them. Gradually, the stone meteor became the musical instrument known as the xun. The drum is a percussion instrument frequently used in China. From the perspective of the culture relics these days, the drum has an estimated history of 3, 000 years. In ancient times, it was not only used in sacrifices and dancing music, but also in fighting against the enemies and wild beasts. It was also used to sound alarms and tell the time. http: //www 1. chinaculture. org/created/node_2888. htm The liuqin is a plucked musical instrument, which also belongs to the pipa(four-stringed lute, a traditional Chinese instrument) category. It is named liuqin or liu ye qin because it is made from the wood of the willow tree and also its appearance is similar to the willow leaf. The look and structure of a liuqin resemble that of a pipa very much. The qing is the oldest ethnic musical instrument. It is designed finely, and carries with it an ancient flavor. In the far ancient society when the female played the leading role (matriarchal society), this instrument was called shi and minqiu, meaning stone and ringing ball respectively. http: //www. newworldencyclopedia. org/entry/Music_of_China (Ming-Quing Dynasties con’t) During this period the influx of folk songs into cultural centers and their subsequent stylizations led to the growth of many forms of provincially (or regionally) indentified operas. Operatic genres such as the Han opera of Hubei province, Chuan opera of Sichuan province, Xiang opera of Hunan province, Min opera of Fujian province, Qinqiang of Shaanxi province, and Lu opera of Shandong province, to name some primary forms, had their formation sometime during the mid-16 th century but did not reach the height of their development until the end of the 19 th and early 20 th centuries. The History of Chinese Music 在中國音樂史 "Yin Yueh" (music) was traditionally considered to be one of the four fundamental societal functions together with morals, las, and politics. Primarily because of this emphasis, every fedual state, dynasty and republic throughout history had established an official music organization or bureau of music. Chime bells, or bianzhong, were an important percussion instrument in ancient China. Chime bells are divided into one or more groups in which there are dozens of big and small bells, each with a different tone. Although the forms of the bells are different, as they developed in different years, there are fine designs on all of them. The sheng was a wind instrument played in ancient China. It has played an active role in promoting the development of Western musical instruments. In 1978, paosheng, the earliest sheng forms, were found in Hubei Province in a royal tomb of more than 2, 400 years ago. The ruan is a stringed musical instrument in China. In the Qin Dynasty (221 -206 BC), people altered a wobbling drum into a stringed instrument.

instrument with four strings. Sometimes called the Chinese lute. It has a pear-shaped wooden body. 音樂 = MUSIC Gu-zheng: Traditional Chinese musical instrument with 21 strings. There are Guzhengs with even more strings. Three Kingdom (220 -265), Jin (260 -420). and the Northern-Southern Dynasty The most significant musical historical events were importation and assimilation of non-indigenous music, expansion of Han musical style into southern China, new instruments, recognition of solo performance, earliest survival notation, maturity of music aesthetics by Xi Kang, and new conception of tonal systems. Sui (581 -618), Tang (618 -907), and Five Dynasties (907 -960) After almost four centuries as a divided nation, China was once again re-united in Sui dynasty. Foreign musicians resided at the court not only to give performances, but also to provide musical instruction. The huge music bureau of the court, such as Jiaofang, was know to have in its employment thousands of musicians and dancers for daily performing duties. The first music academy, Liyuan ("Pear Garden"), was instituted for performance and training of professional young musicians. Poems by some of the most famous literati of China were set into songs which were almost instantly popular. Music of the Northern Song (960 -1127), Southern Song (1127 -1279) and Yuan (1271 -1368) Dynasties Changes in the arts and literature of this period led to a new tradition in drama, music, fiction and impressionistic painting that dominated the development in the remaining periods of modern China. The creation of a new style in popular music, dram and literature were mostly important. The scholar-officials, who were versatile in poetry, painting and music making, found an expanded audience for their song and word production. There were for major vocal genres: the poetic ci song, the art song, narrative music, the zaju variety musical drama. During this period, qin solo repertory also developed into a grand style. Er-hu: Two-string bowed Chinese musical instrument, known in the West as the "Chinese violin" or "Chinese two-string fiddle". Xiao: Pronounced as "Shyiao", a Chinese vertical end-blown flute. Normally made of bamboo. Its sound is thick, serious and peaceful. http: //www-camil. music. uiuc. edu/musedex/taiwan/Chinese-history/Ch. History. html Shang (ca. 16 th-11 th centuries B. C. ), Zhou (1075 -221 B. C. ) According to literary documents, the Zhouperiod music had always been regarded as the foundation and crystallization of Chinese music for later dynasties. The complete model of court and ritual ceremonial music, music education system, the variety of musical styles, the grand music offices, and instrumentation were seeds of music for the subsequent dynasties. Qin (221 B. C. -207 B. C. ) and Han Dynasties (206 B. C. -A. D. 220) In addition to the native court musical instruments, that is, the zithers, panpipes, transverse flutes, vessel flutes, and a variety of barrel-shaped, stick membranophones, bells and lithophones, there were several new instruments introduced during this period. The were derived from regional and foreign sources. Pipa: A plucked Chinese musical The zheng is an ancient Chinese instrument. It has been developed from a small instrument made from bamboo, originally used by herdsman. It was very popular during ancient times, as early as the Warring States Period and the Qin Dynasty (225 to 206 BC and earlier). Ming-Quing Dynasties The Ming-Qing period was highly productive musically, resulting in developments that are important not only in this period but as high-lights in the whole continuum of Chinese music. Regrettably, by the 19 th century, creativity was replaced by cliché, imitation and conservatism; the arts of this time are generally criticized as becoming lifeless and stagnant. Communist party denounced Chinese popular music as yellow music (pornography). Maoists regarded pop music as a decline of the art form in the mainland. Revolutionary songs would become heavily promoted by the state. The Cultural Revolution and other Maoist initiatives made revolutionary songs the only acceptable genre of music, to the point that it overshadowed other genres and almost defined what mainland Chinese music was After the Tiananmen Square protests of 1989, a new fast tempo Northwest Wind (xibeifeng, 西北風) style was launched by the people to counter the government. The music progressed into Chinese rock, which remained popular in the 1990 s. However, music in China is dominated by the state, as the television broadcasting, media, and major concert halls are all controlled by the Communist party. Today, Chinese rock music is centered almost exclusively in Beijing and Shanghai, and has very limited influence over Chinese society. The situation of Chinese rock highlights the significant cultural, political and social differences between China and the West, and even between different regions within China. While rock has existed in China for decades, if first received international attention when Cui Jian played with The Rolling Stones in 2003, at the age of 42. 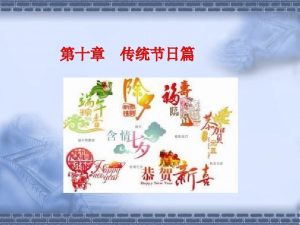