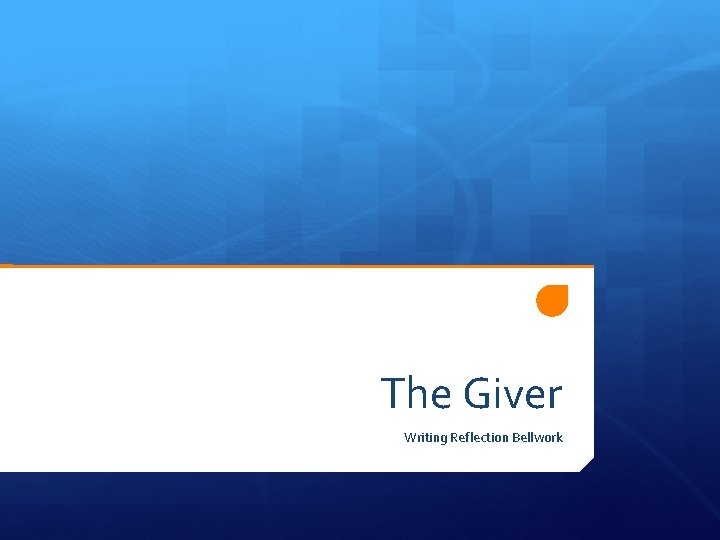 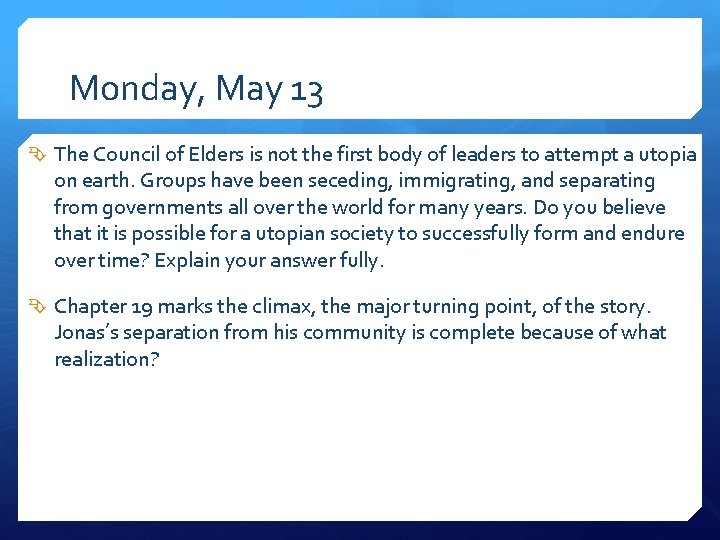 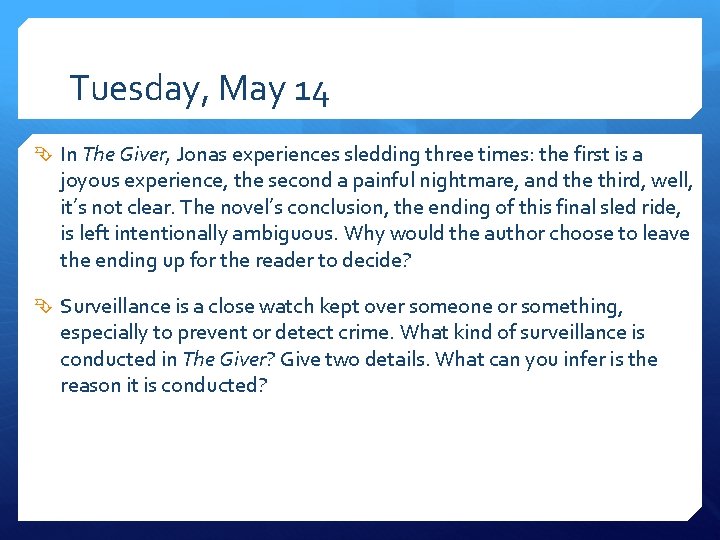 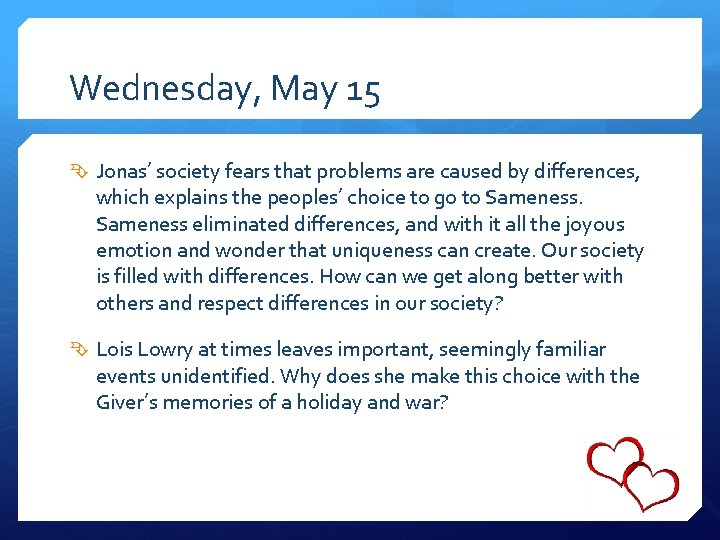 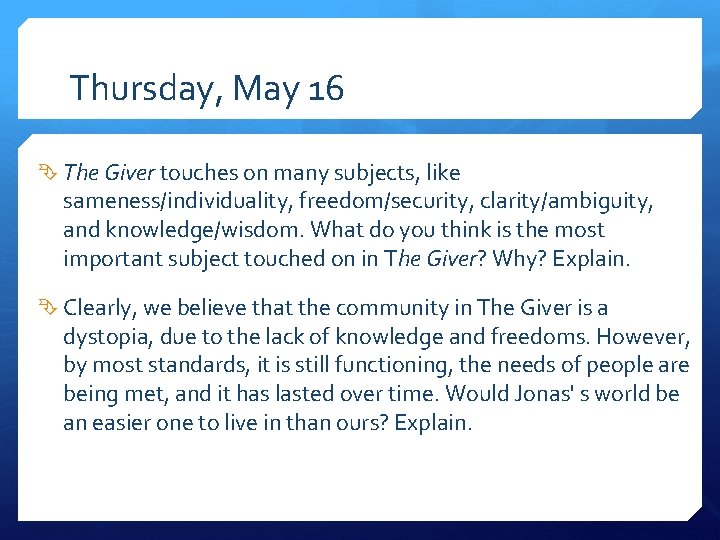 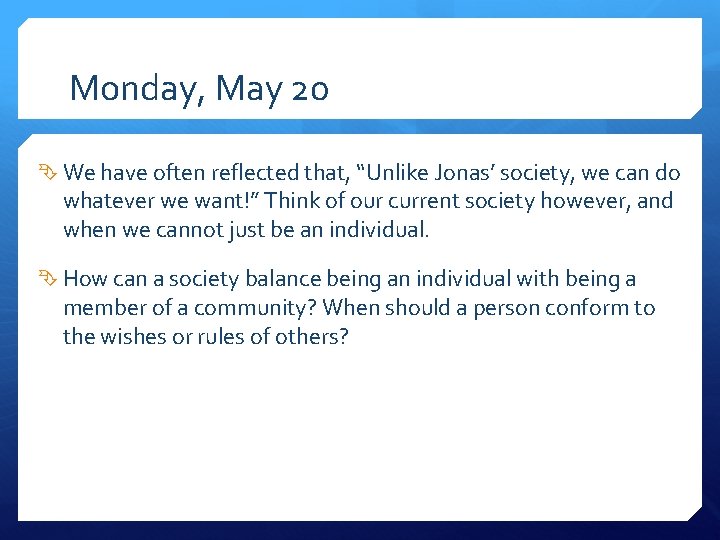 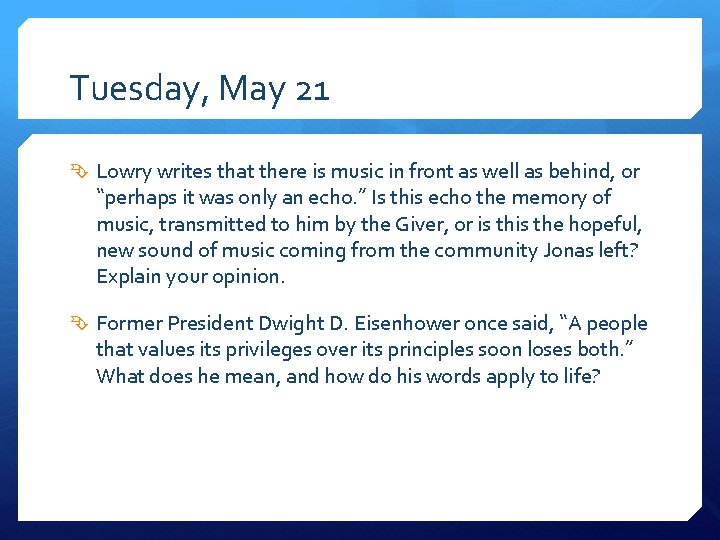 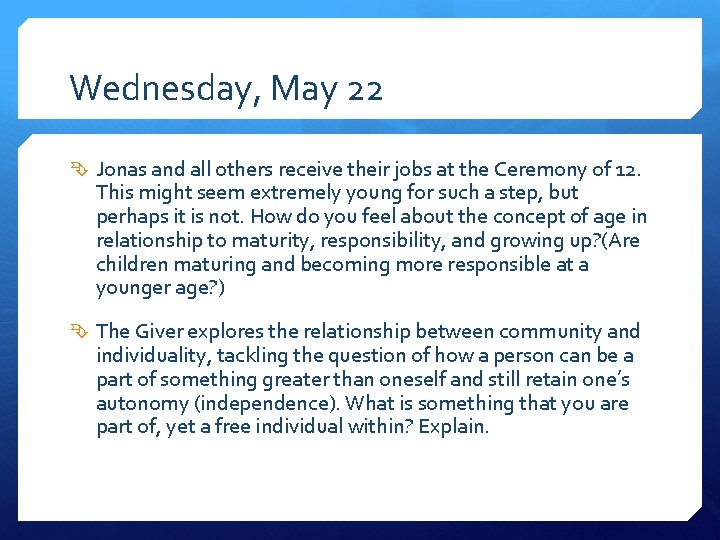 Monday, May 13 The Council of Elders is not the first body of leaders to attempt a utopia on earth. Groups have been seceding, immigrating, and separating from governments all over the world for many years. Do you believe that it is possible for a utopian society to successfully form and endure over time? Explain your answer fully. Chapter 19 marks the climax, the major turning point, of the story. Jonas’s separation from his community is complete because of what realization?

Tuesday, May 14 In The Giver, Jonas experiences sledding three times: the first is a joyous experience, the second a painful nightmare, and the third, well, it’s not clear. The novel’s conclusion, the ending of this final sled ride, is left intentionally ambiguous. Why would the author choose to leave the ending up for the reader to decide? Surveillance is a close watch kept over someone or something, especially to prevent or detect crime. What kind of surveillance is conducted in The Giver? Give two details. What can you infer is the reason it is conducted?

Wednesday, May 15 Jonas’ society fears that problems are caused by differences, which explains the peoples’ choice to go to Sameness eliminated differences, and with it all the joyous emotion and wonder that uniqueness can create. Our society is filled with differences. How can we get along better with others and respect differences in our society? Lois Lowry at times leaves important, seemingly familiar events unidentified. Why does she make this choice with the Giver’s memories of a holiday and war?

Thursday, May 16 The Giver touches on many subjects, like sameness/individuality, freedom/security, clarity/ambiguity, and knowledge/wisdom. What do you think is the most important subject touched on in The Giver? Why? Explain. Clearly, we believe that the community in The Giver is a dystopia, due to the lack of knowledge and freedoms. However, by most standards, it is still functioning, the needs of people are being met, and it has lasted over time. Would Jonas' s world be an easier one to live in than ours? Explain.

Monday, May 20 We have often reflected that, “Unlike Jonas’ society, we can do whatever we want!” Think of our current society however, and when we cannot just be an individual. How can a society balance being an individual with being a member of a community? When should a person conform to the wishes or rules of others?

Tuesday, May 21 Lowry writes that there is music in front as well as behind, or “perhaps it was only an echo. ” Is this echo the memory of music, transmitted to him by the Giver, or is the hopeful, new sound of music coming from the community Jonas left? Explain your opinion. Former President Dwight D. Eisenhower once said, “A people that values its privileges over its principles soon loses both. ” What does he mean, and how do his words apply to life?

Wednesday, May 22 Jonas and all others receive their jobs at the Ceremony of 12. This might seem extremely young for such a step, but perhaps it is not. How do you feel about the concept of age in relationship to maturity, responsibility, and growing up? (Are children maturing and becoming more responsible at a younger age? ) The Giver explores the relationship between community and individuality, tackling the question of how a person can be a part of something greater than oneself and still retain one’s autonomy (independence). What is something that you are part of, yet a free individual within? Explain. 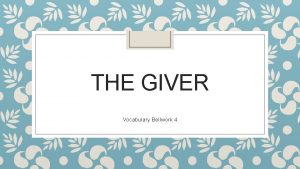 THE GIVER Vocabulary Bellwork 4 Monday May 6 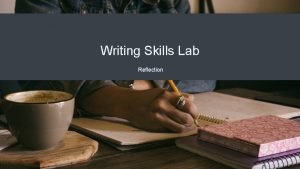 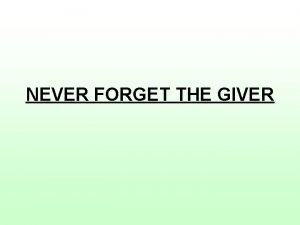 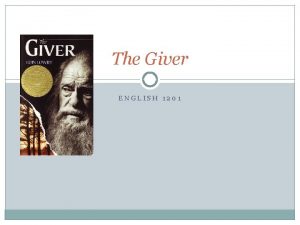 The Giver ENGLISH 1201 Introduction The Giver is 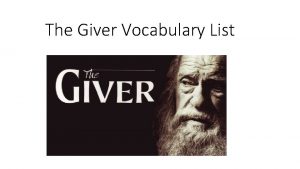 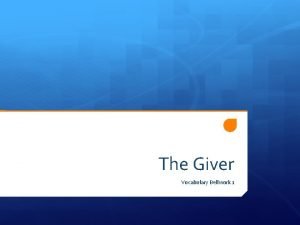 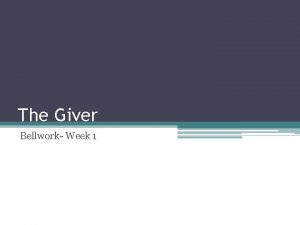