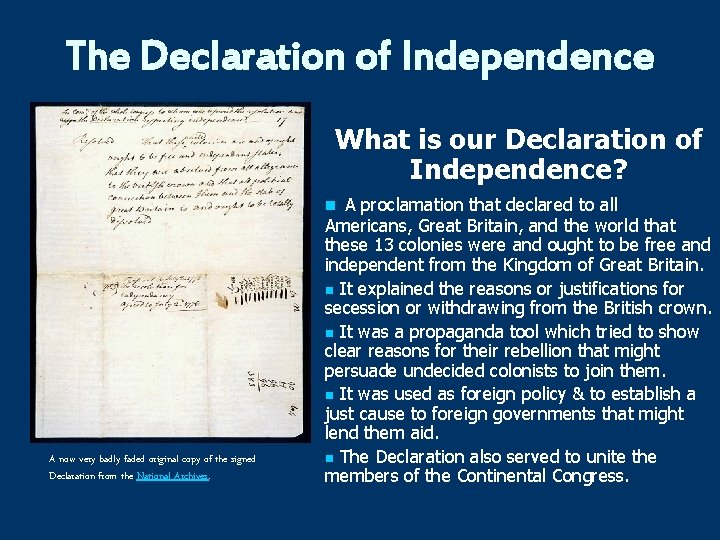 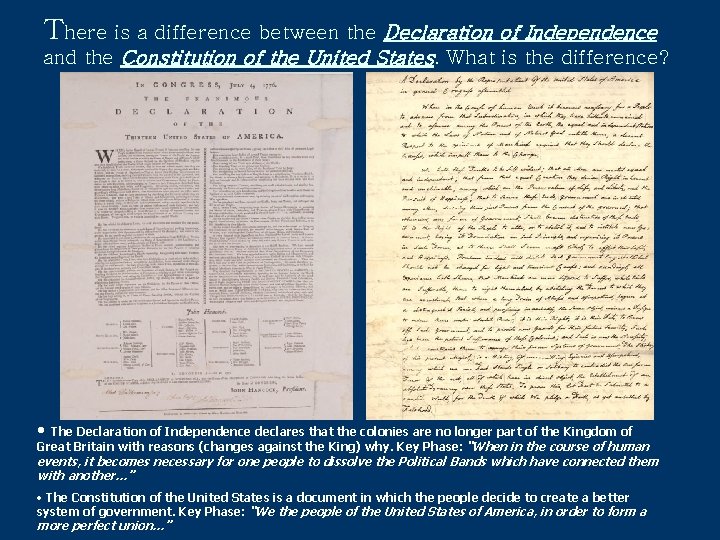 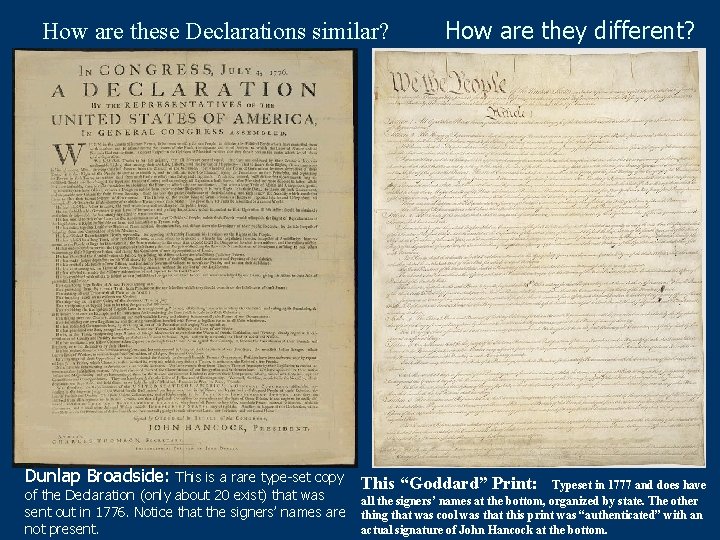 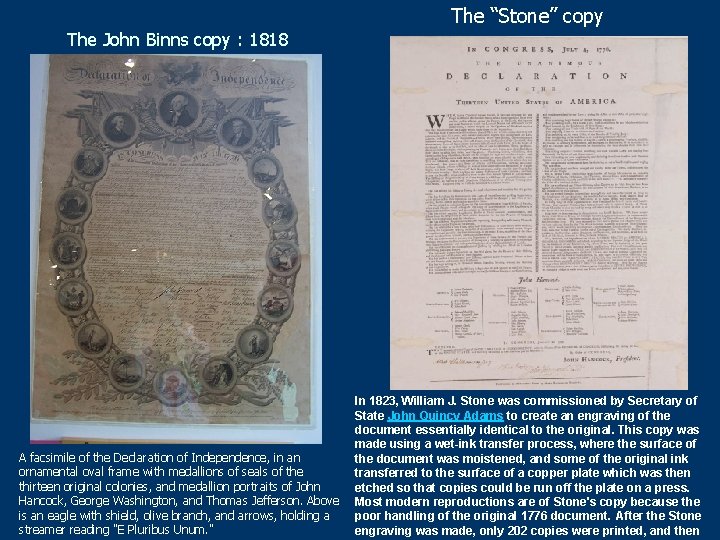 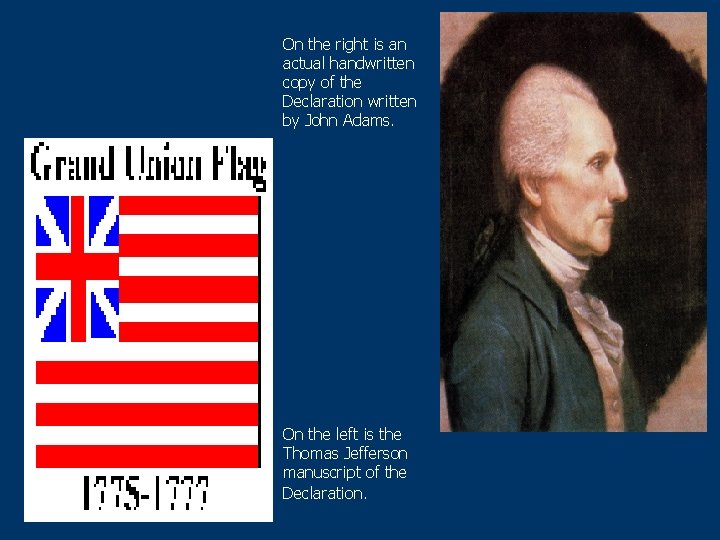 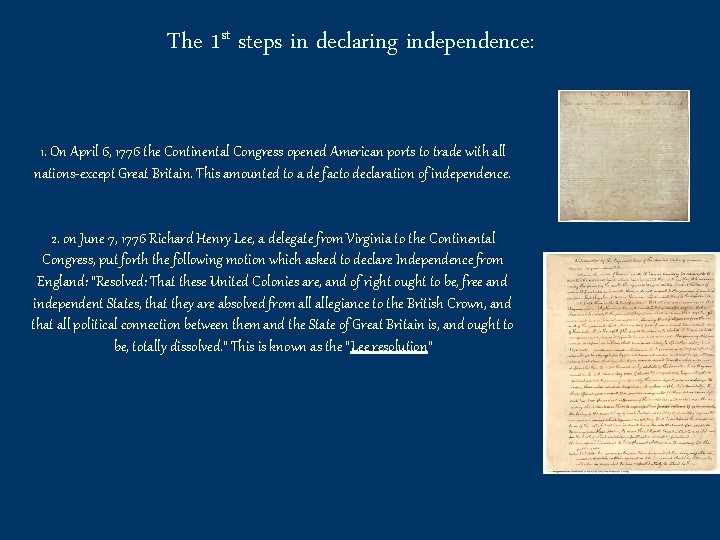 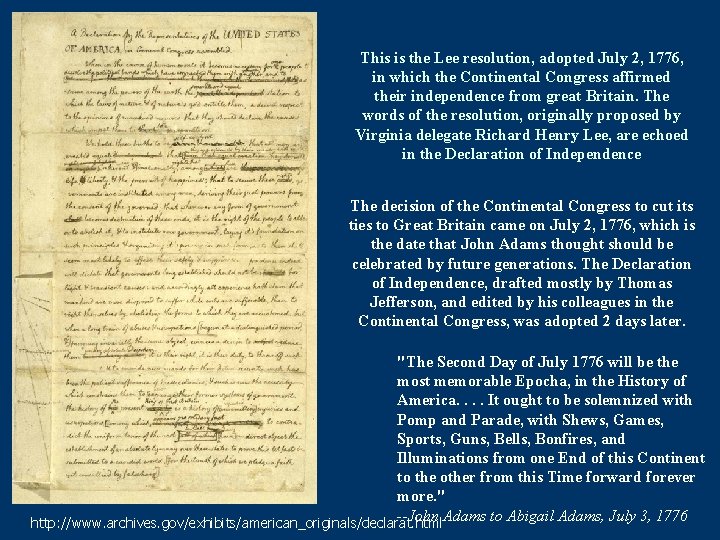 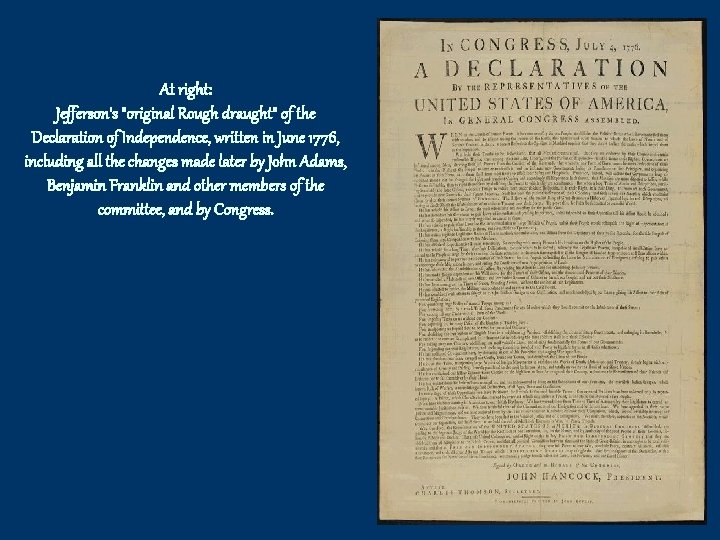 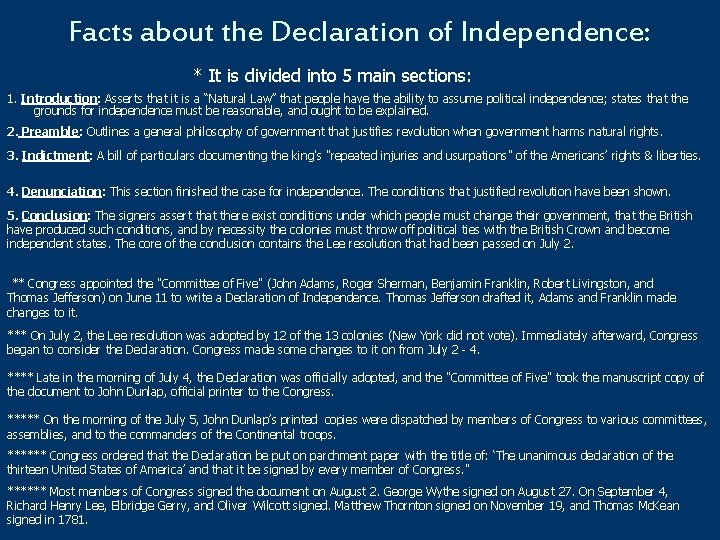 The Declaration of Independence What is our Declaration of Independence? n A proclamation that declared to all A now very badly faded original copy of the signed Declaration from the National Archives. Americans, Great Britain, and the world that these 13 colonies were and ought to be free and independent from the Kingdom of Great Britain. n It explained the reasons or justifications for secession or withdrawing from the British crown. n It was a propaganda tool which tried to show clear reasons for their rebellion that might persuade undecided colonists to join them. n It was used as foreign policy & to establish a just cause to foreign governments that might lend them aid. n The Declaration also served to unite the members of the Continental Congress.

There is a difference between the Declaration of Independence and the Constitution of the United States. What is the difference? • The Declaration of Independence declares that the colonies are no longer part of the Kingdom of Great Britain with reasons (changes against the King) why. Key Phase: “When in the course of human events, it becomes necessary for one people to dissolve the Political Bands which have connected them with another…” • The Constitution of the United States is a document in which the people decide to create a better system of government. Key Phase: “We the people of the United States of America, in order to form a more perfect union…”

How are these Declarations similar? Dunlap Broadside: This is a rare type-set copy of the Declaration (only about 20 exist) that was sent out in 1776. Notice that the signers’ names are not present. How are they different? This “Goddard” Print: Typeset in 1777 and does have all the signers’ names at the bottom, organized by state. The other thing that was cool was that this print was “authenticated” with an actual signature of John Hancock at the bottom.

The John Binns copy : 1818 A facsimile of the Declaration of Independence, in an ornamental oval frame with medallions of seals of the thirteen original colonies, and medallion portraits of John Hancock, George Washington, and Thomas Jefferson. Above is an eagle with shield, olive branch, and arrows, holding a streamer reading "E Pluribus Unum. " The “Stone” copy In 1823, William J. Stone was commissioned by Secretary of State John Quincy Adams to create an engraving of the document essentially identical to the original. This copy was made using a wet-ink transfer process, where the surface of the document was moistened, and some of the original ink transferred to the surface of a copper plate which was then etched so that copies could be run off the plate on a press. Most modern reproductions are of Stone's copy because the poor handling of the original 1776 document. After the Stone engraving was made, only 202 copies were printed, and then

The 1 st steps in declaring independence: 1. On April 6, 1776 the Continental Congress opened American ports to trade with all nations-except Great Britain. This amounted to a de facto declaration of independence. 2. on June 7, 1776 Richard Henry Lee, a delegate from Virginia to the Continental Congress, put forth the following motion which asked to declare Independence from England: “Resolved: That these United Colonies are, and of right ought to be, free and independent States, that they are absolved from allegiance to the British Crown, and that all political connection between them and the State of Great Britain is, and ought to be, totally dissolved. ” This is known as the “Lee resolution”

This is the Lee resolution, adopted July 2, 1776, in which the Continental Congress affirmed their independence from great Britain. The words of the resolution, originally proposed by Virginia delegate Richard Henry Lee, are echoed in the Declaration of Independence The decision of the Continental Congress to cut its ties to Great Britain came on July 2, 1776, which is the date that John Adams thought should be celebrated by future generations. The Declaration of Independence, drafted mostly by Thomas Jefferson, and edited by his colleagues in the Continental Congress, was adopted 2 days later. "The Second Day of July 1776 will be the most memorable Epocha, in the History of America. . It ought to be solemnized with Pomp and Parade, with Shews, Games, Sports, Guns, Bells, Bonfires, and Illuminations from one End of this Continent to the other from this Time forward forever more. " --John Adams to Abigail Adams, July 3, 1776 http: //www. archives. gov/exhibits/american_originals/declarat. html

At right: Jefferson's "original Rough draught" of the Declaration of Independence, written in June 1776, including all the changes made later by John Adams, Benjamin Franklin and other members of the committee, and by Congress.

Facts about the Declaration of Independence: * It is divided into 5 main sections: 1. Introduction: Asserts that it is a “Natural Law” that people have the ability to assume political independence; states that the grounds for independence must be reasonable, and ought to be explained. 2. Preamble: Outlines a general philosophy of government that justifies revolution when government harms natural rights. 3. Indictment: A bill of particulars documenting the king's "repeated injuries and usurpations" of the Americans’ rights & liberties. 4. Denunciation: This section finished the case for independence. The conditions that justified revolution have been shown. 5. Conclusion: The signers assert that there exist conditions under which people must change their government, that the British have produced such conditions, and by necessity the colonies must throw off political ties with the British Crown and become independent states. The core of the conclusion contains the Lee resolution that had been passed on July 2. ** Congress appointed the "Committee of Five" (John Adams, Roger Sherman, Benjamin Franklin, Robert Livingston, and Thomas Jefferson) on June 11 to write a Declaration of Independence. Thomas Jefferson drafted it, Adams and Franklin made changes to it. *** On July 2, the Lee resolution was adopted by 12 of the 13 colonies (New York did not vote). Immediately afterward, Congress began to consider the Declaration. Congress made some changes to it on from July 2 - 4. **** Late in the morning of July 4, the Declaration was officially adopted, and the "Committee of Five" took the manuscript copy of the document to John Dunlap, official printer to the Congress. ***** On the morning of the July 5, John Dunlap’s printed copies were dispatched by members of Congress to various committees, assemblies, and to the commanders of the Continental troops. ****** Congress ordered that the Declaration be put on parchment paper with the title of: ‘The unanimous declaration of the thirteen United States of America’ and that it be signed by every member of Congress. " ****** Most members of Congress signed the document on August 2. George Wythe signed on August 27. On September 4, Richard Henry Lee, Elbridge Gerry, and Oliver Wilcott signed. Matthew Thornton signed on November 19, and Thomas Mc. Kean signed in 1781. 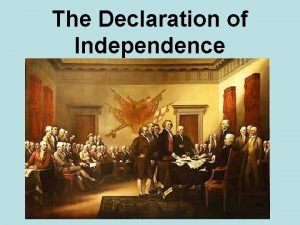 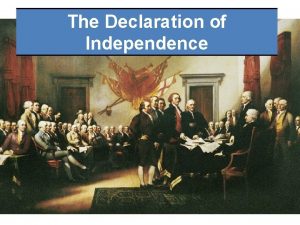 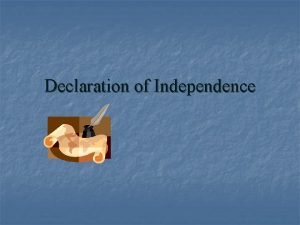 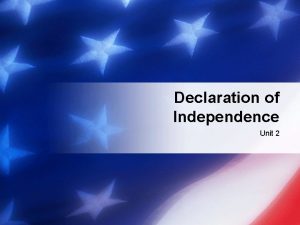 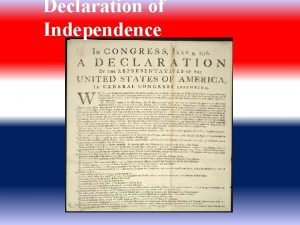 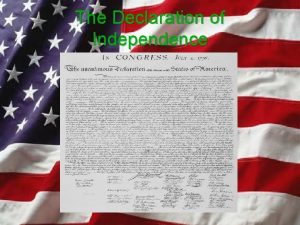 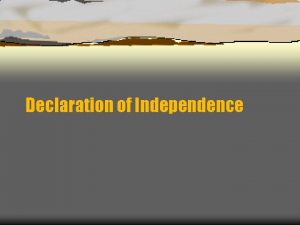 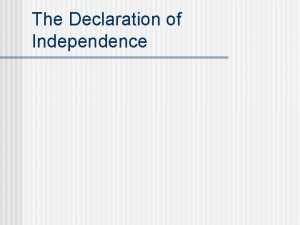