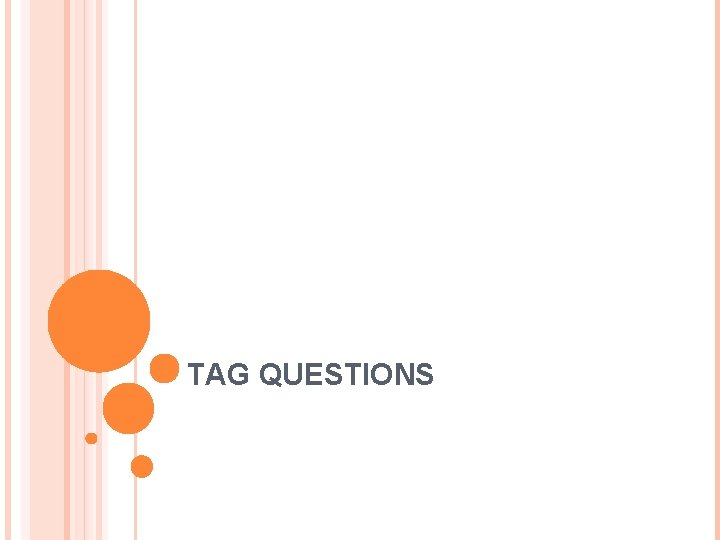 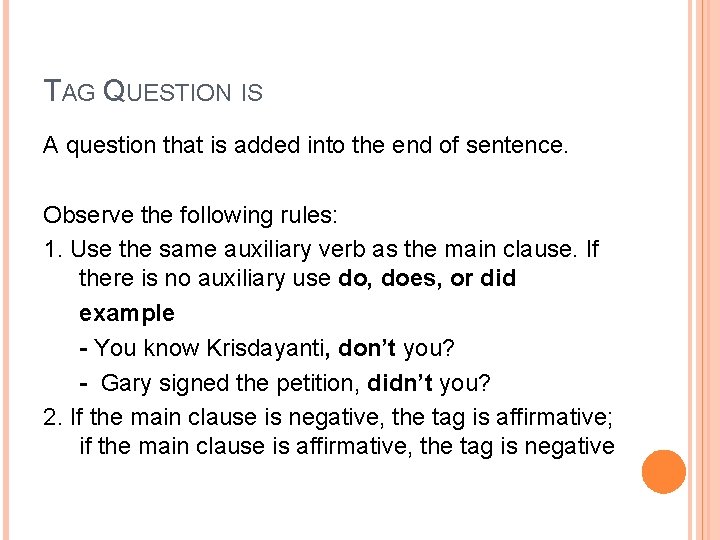 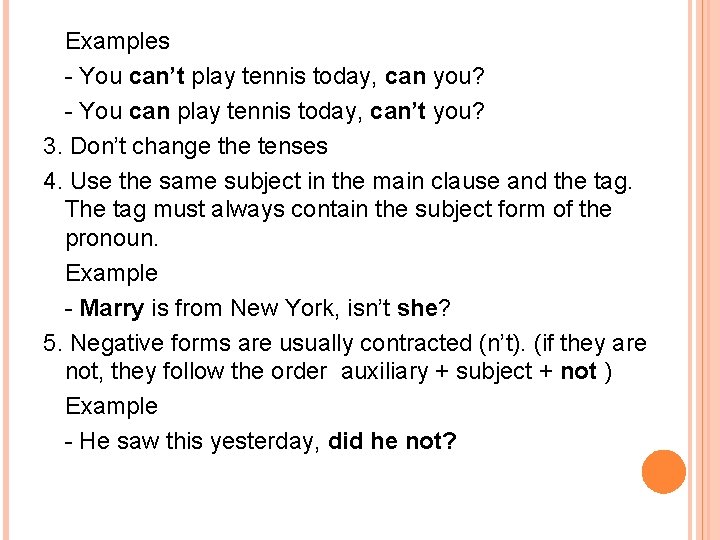 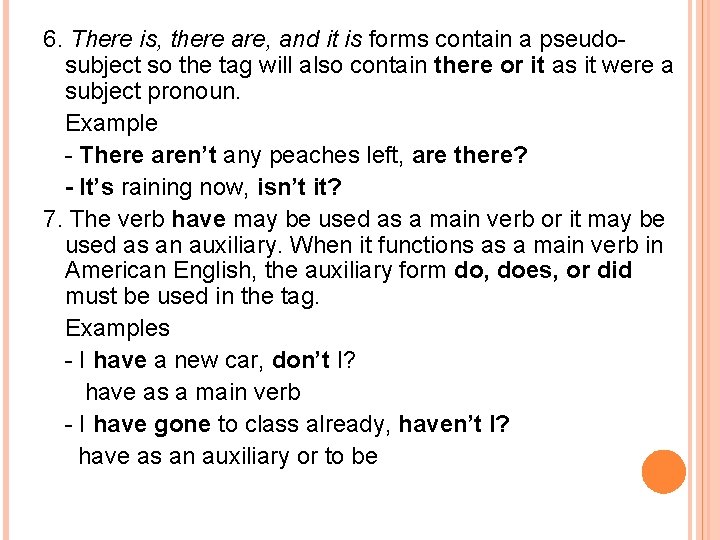 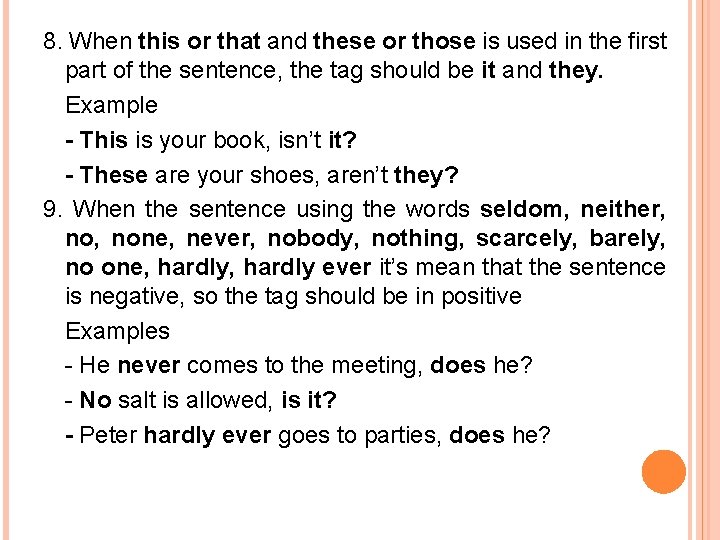 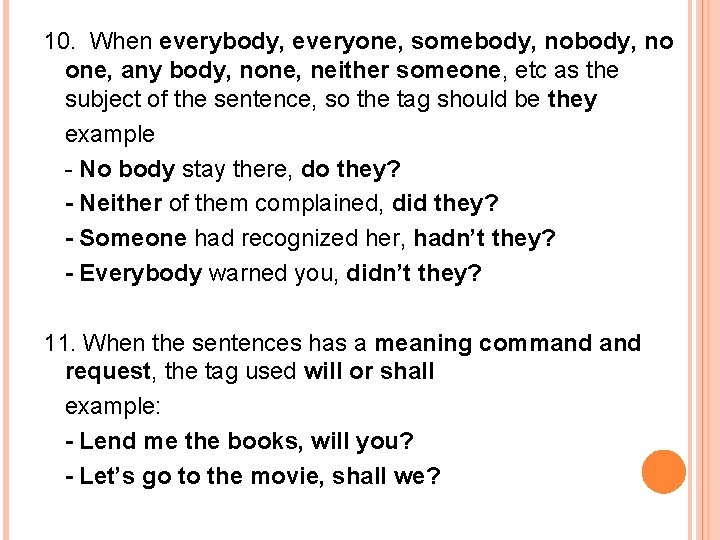 Examples - You can’t play tennis today, can you? - You can play tennis today, can’t you? 3. Don’t change the tenses 4. Use the same subject in the main clause and the tag. The tag must always contain the subject form of the pronoun. Example - Marry is from New York, isn’t she? 5. Negative forms are usually contracted (n’t). (if they are not, they follow the order auxiliary + subject + not ) Example - He saw this yesterday, did he not?

6. There is, there are, and it is forms contain a pseudosubject so the tag will also contain there or it as it were a subject pronoun. Example - There aren’t any peaches left, are there? - It’s raining now, isn’t it? 7. The verb have may be used as a main verb or it may be used as an auxiliary. When it functions as a main verb in American English, the auxiliary form do, does, or did must be used in the tag. Examples - I have a new car, don’t I? have as a main verb - I have gone to class already, haven’t I? have as an auxiliary or to be

8. When this or that and these or those is used in the first part of the sentence, the tag should be it and they. Example - This is your book, isn’t it? - These are your shoes, aren’t they? 9. When the sentence using the words seldom, neither, none, never, nobody, nothing, scarcely, barely, no one, hardly ever it’s mean that the sentence is negative, so the tag should be in positive Examples - He never comes to the meeting, does he? - No salt is allowed, is it? - Peter hardly ever goes to parties, does he?

10. When everybody, everyone, somebody, no one, any body, none, neither someone, etc as the subject of the sentence, so the tag should be they example - No body stay there, do they? - Neither of them complained, did they? - Someone had recognized her, hadn’t they? - Everybody warned you, didn’t they? 11. When the sentences has a meaning command request, the tag used will or shall example: - Lend me the books, will you? - Let’s go to the movie, shall we? 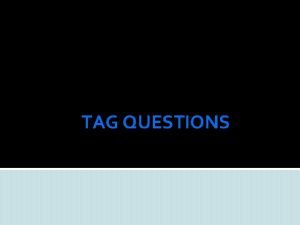 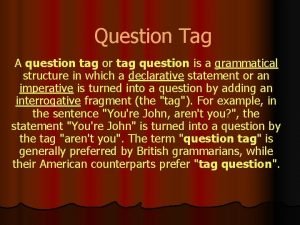 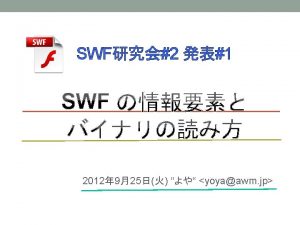 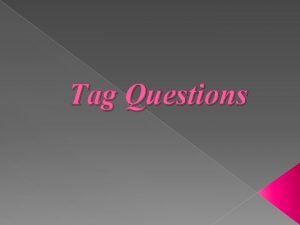 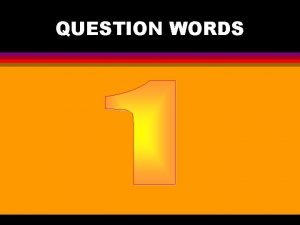