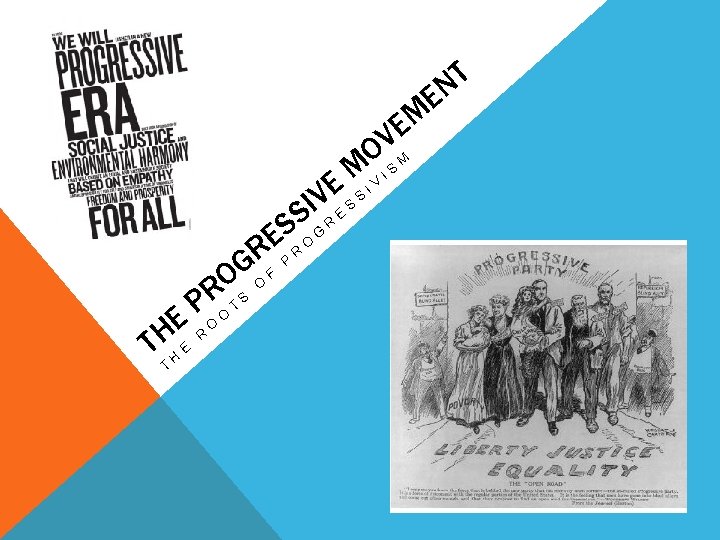 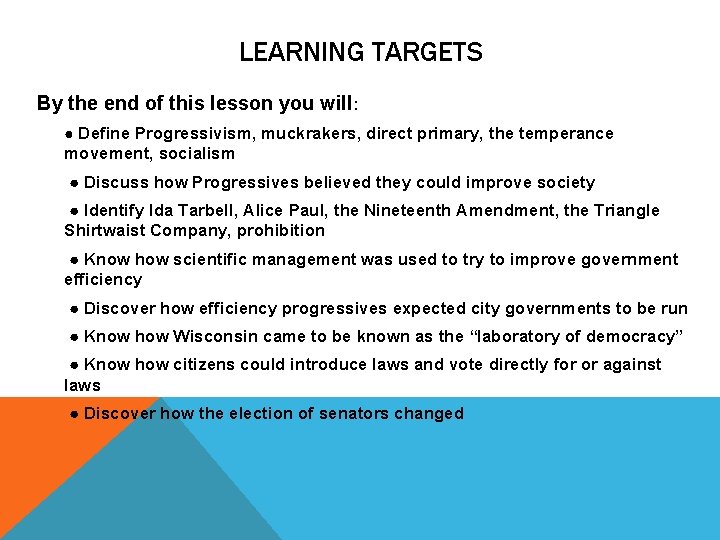 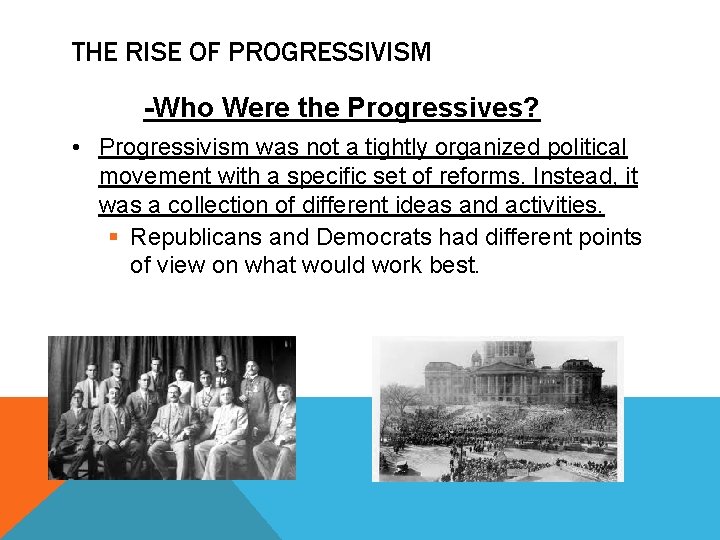 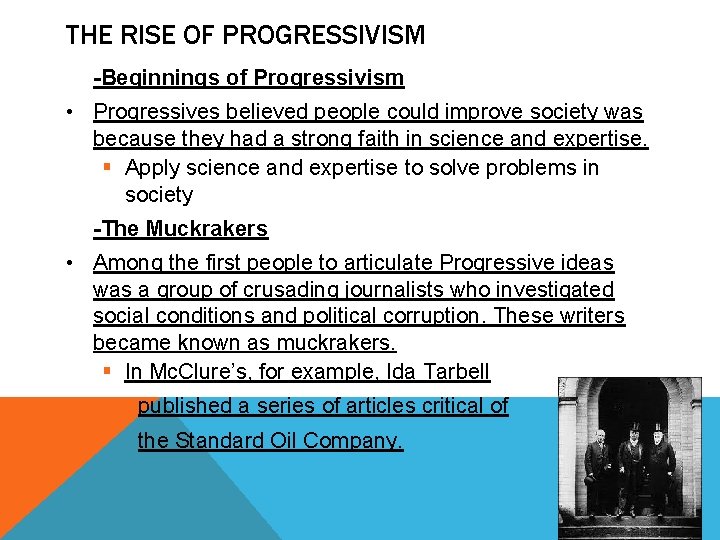 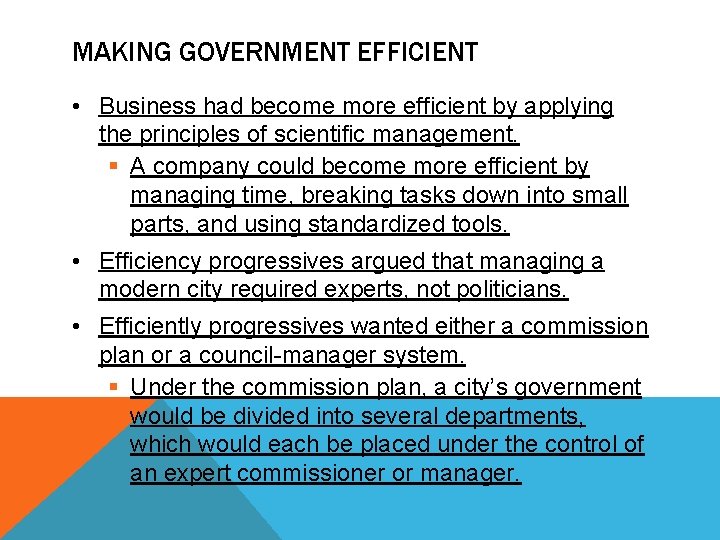 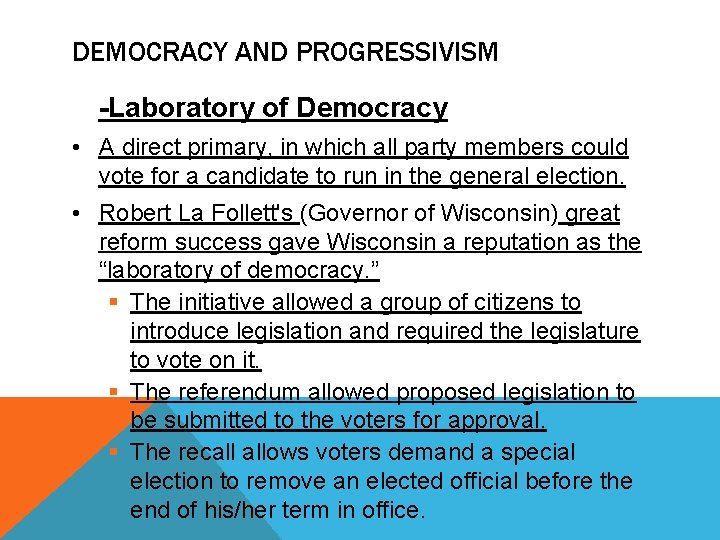 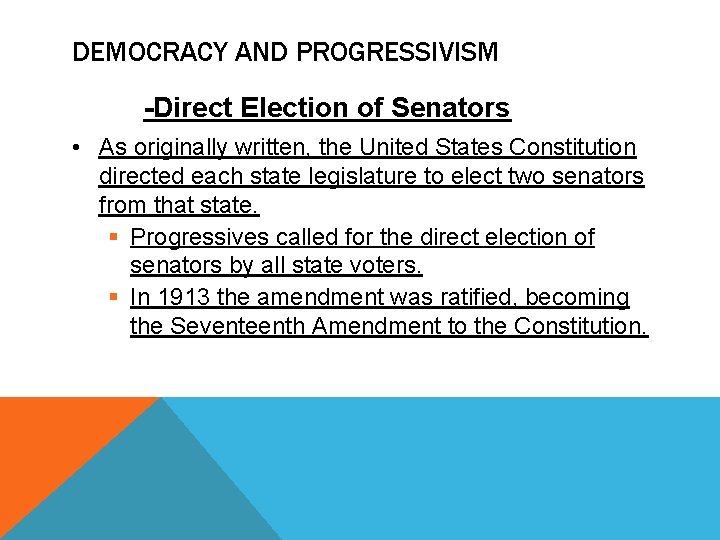 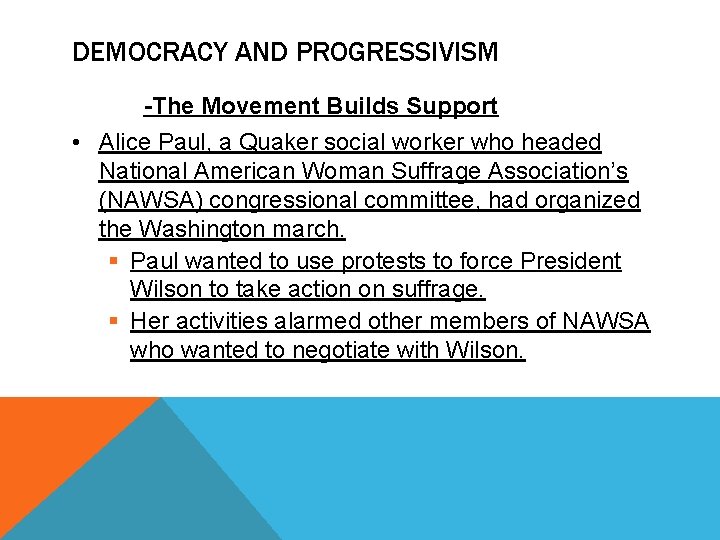 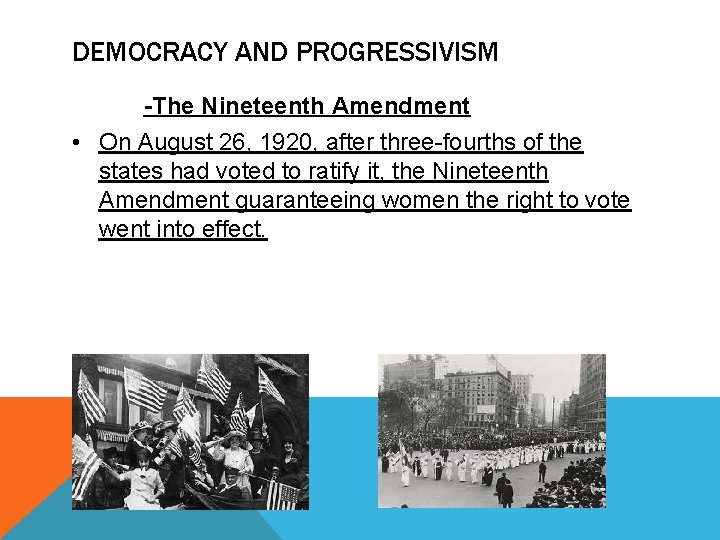 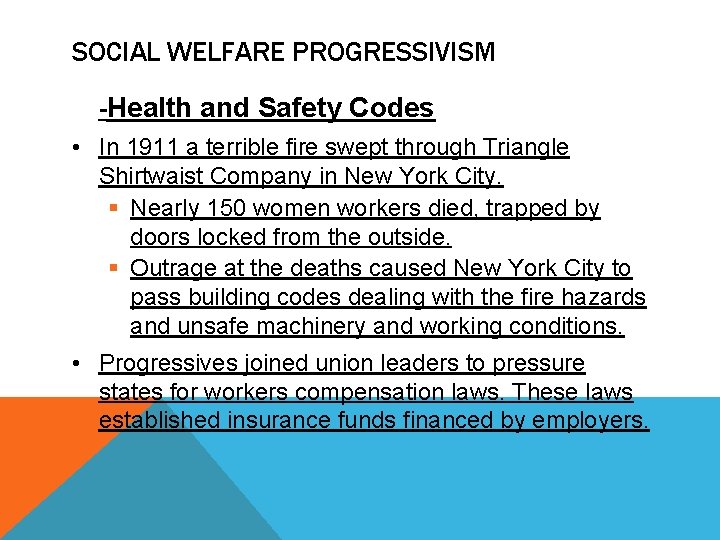 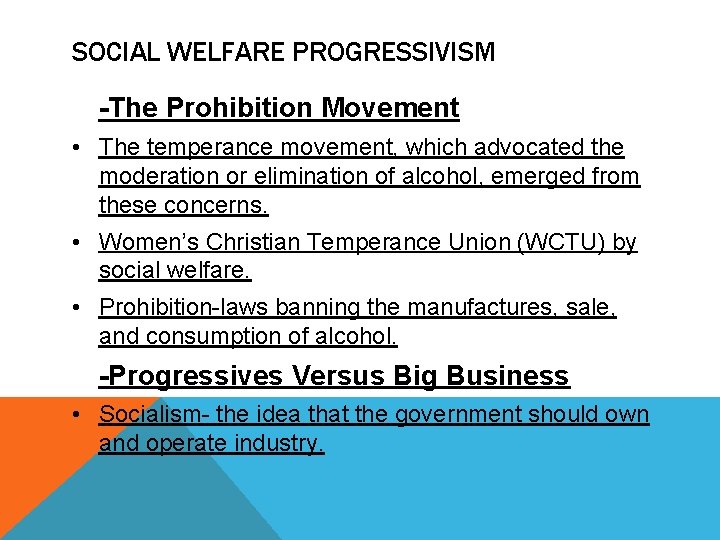 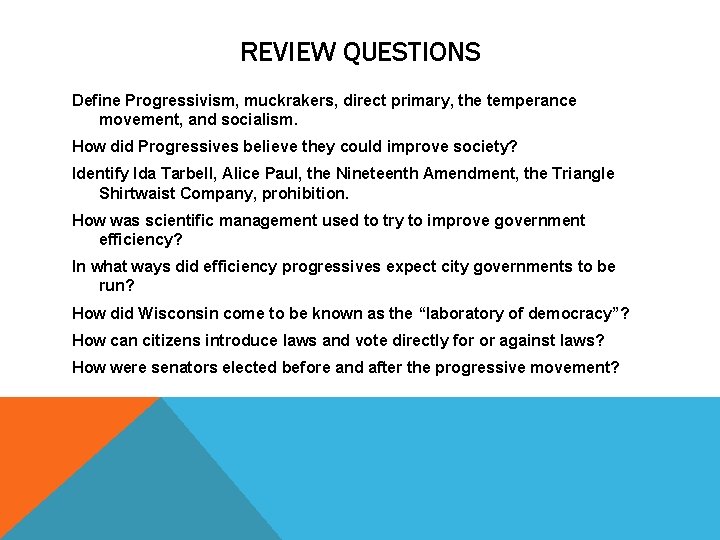 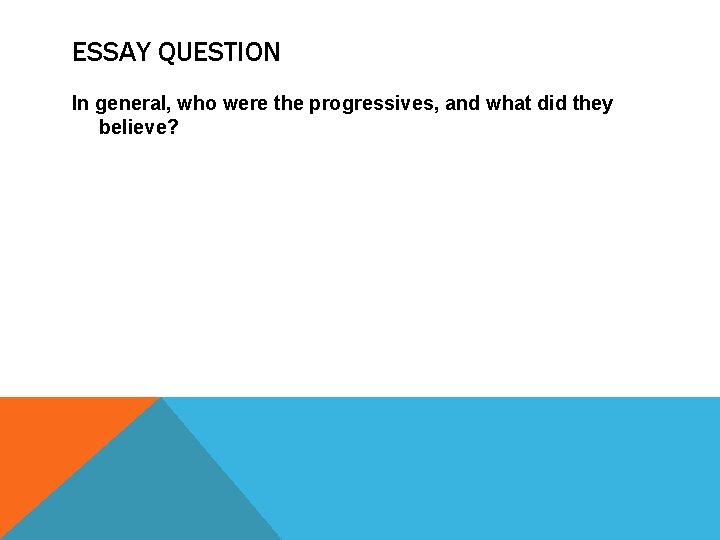 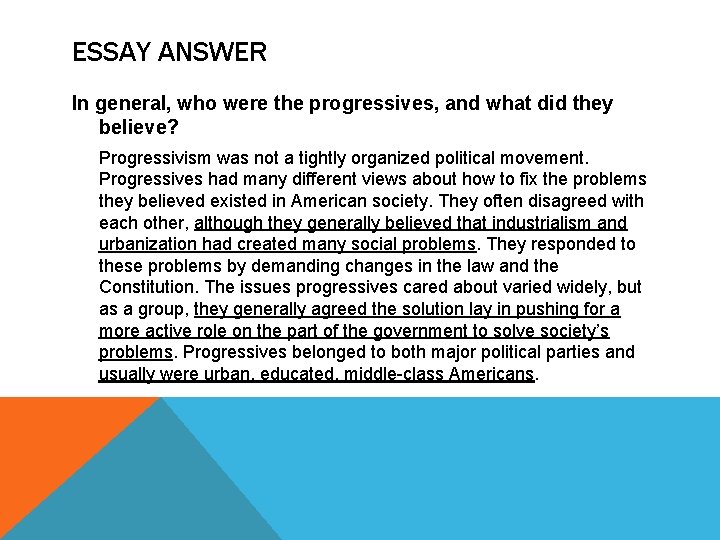 LEARNING TARGETS By the end of this lesson you will: ● Define Progressivism, muckrakers, direct primary, the temperance movement, socialism ● Discuss how Progressives believed they could improve society ● Identify Ida Tarbell, Alice Paul, the Nineteenth Amendment, the Triangle Shirtwaist Company, prohibition ● Know how scientific management was used to try to improve government efficiency ● Discover how efficiency progressives expected city governments to be run ● Know how Wisconsin came to be known as the “laboratory of democracy” ● Know how citizens could introduce laws and vote directly for or against laws ● Discover how the election of senators changed

THE RISE OF PROGRESSIVISM -Who Were the Progressives? • Progressivism was not a tightly organized political movement with a specific set of reforms. Instead, it was a collection of different ideas and activities. § Republicans and Democrats had different points of view on what would work best.

THE RISE OF PROGRESSIVISM -Beginnings of Progressivism • Progressives believed people could improve society was because they had a strong faith in science and expertise. § Apply science and expertise to solve problems in society -The Muckrakers • Among the first people to articulate Progressive ideas was a group of crusading journalists who investigated social conditions and political corruption. These writers became known as muckrakers. § In Mc. Clure’s, for example, Ida Tarbell published a series of articles critical of the Standard Oil Company.

MAKING GOVERNMENT EFFICIENT • Business had become more efficient by applying the principles of scientific management. § A company could become more efficient by managing time, breaking tasks down into small parts, and using standardized tools. • Efficiency progressives argued that managing a modern city required experts, not politicians. • Efficiently progressives wanted either a commission plan or a council-manager system. § Under the commission plan, a city’s government would be divided into several departments, which would each be placed under the control of an expert commissioner or manager.

DEMOCRACY AND PROGRESSIVISM -Laboratory of Democracy • A direct primary, in which all party members could vote for a candidate to run in the general election. • Robert La Follett's (Governor of Wisconsin) great reform success gave Wisconsin a reputation as the “laboratory of democracy. ” § The initiative allowed a group of citizens to introduce legislation and required the legislature to vote on it. § The referendum allowed proposed legislation to be submitted to the voters for approval. § The recall allows voters demand a special election to remove an elected official before the end of his/her term in office.

DEMOCRACY AND PROGRESSIVISM -Direct Election of Senators • As originally written, the United States Constitution directed each state legislature to elect two senators from that state. § Progressives called for the direct election of senators by all state voters. § In 1913 the amendment was ratified, becoming the Seventeenth Amendment to the Constitution.

DEMOCRACY AND PROGRESSIVISM -The Movement Builds Support • Alice Paul, a Quaker social worker who headed National American Woman Suffrage Association’s (NAWSA) congressional committee, had organized the Washington march. § Paul wanted to use protests to force President Wilson to take action on suffrage. § Her activities alarmed other members of NAWSA who wanted to negotiate with Wilson.

SOCIAL WELFARE PROGRESSIVISM -The Prohibition Movement • The temperance movement, which advocated the moderation or elimination of alcohol, emerged from these concerns. • Women’s Christian Temperance Union (WCTU) by social welfare. • Prohibition-laws banning the manufactures, sale, and consumption of alcohol. -Progressives Versus Big Business • Socialism- the idea that the government should own and operate industry.

REVIEW QUESTIONS Define Progressivism, muckrakers, direct primary, the temperance movement, and socialism. How did Progressives believe they could improve society? Identify Ida Tarbell, Alice Paul, the Nineteenth Amendment, the Triangle Shirtwaist Company, prohibition. How was scientific management used to try to improve government efficiency? In what ways did efficiency progressives expect city governments to be run? How did Wisconsin come to be known as the “laboratory of democracy”? How can citizens introduce laws and vote directly for or against laws? How were senators elected before and after the progressive movement?

ESSAY QUESTION In general, who were the progressives, and what did they believe?

ESSAY ANSWER In general, who were the progressives, and what did they believe? Progressivism was not a tightly organized political movement. Progressives had many different views about how to fix the problems they believed existed in American society. They often disagreed with each other, although they generally believed that industrialism and urbanization had created many social problems. They responded to these problems by demanding changes in the law and the Constitution. The issues progressives cared about varied widely, but as a group, they generally agreed the solution lay in pushing for a more active role on the part of the government to solve society’s problems. Progressives belonged to both major political parties and usually were urban, educated, middle-class Americans.