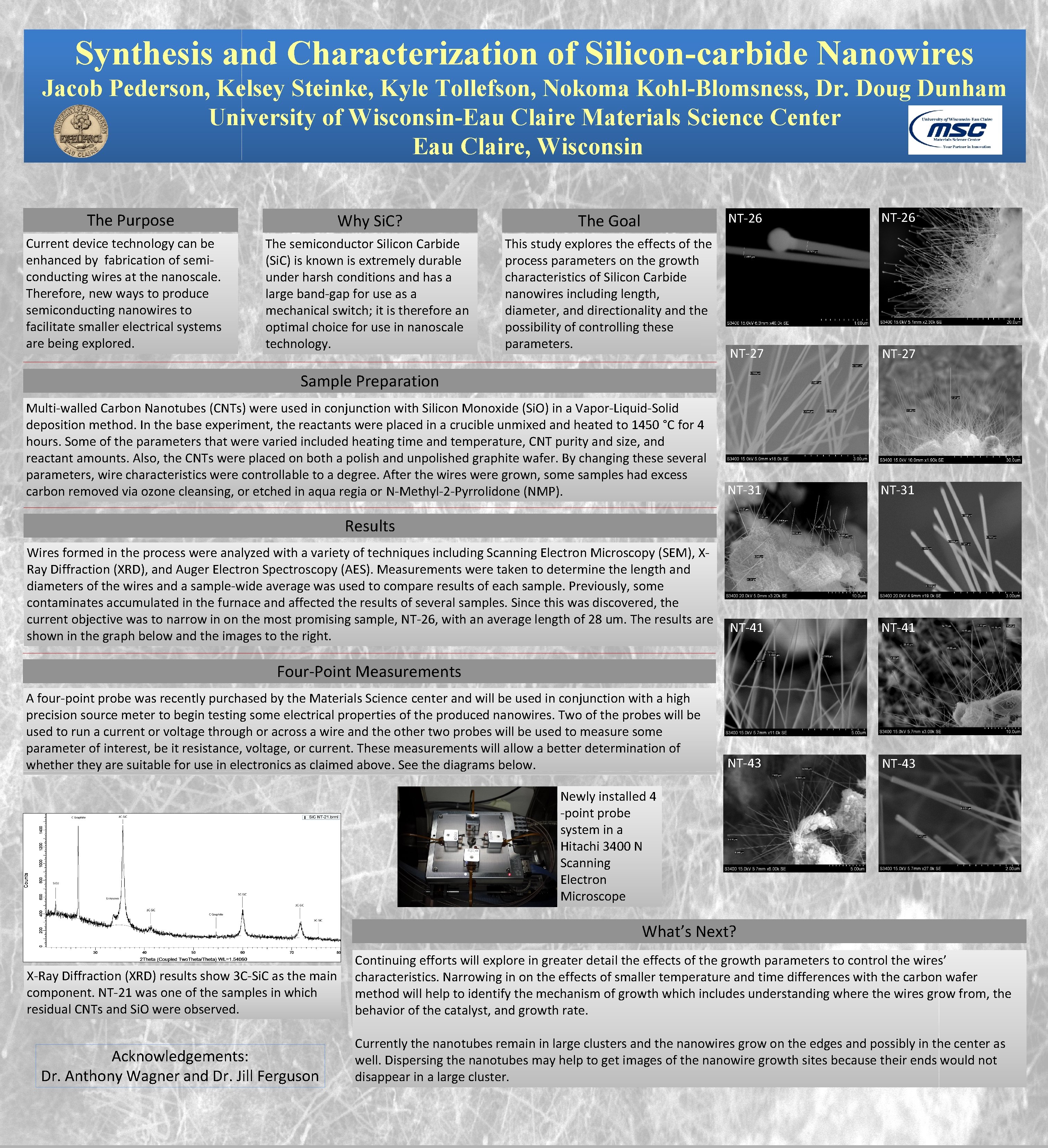 Synthesis and Characterization of Silicon-carbide Nanowires Jacob Pederson, Kelsey Steinke, Kyle Tollefson, Nokoma Kohl-Blomsness, Dr. Doug Dunham University of Wisconsin-Eau Claire Materials Science Center Eau Claire, Wisconsin The Purpose Current device technology can be enhanced by fabrication of semiconducting wires at the nanoscale. Therefore, new ways to produce semiconducting nanowires to facilitate smaller electrical systems are being explored. Why Si. C? The Goal The semiconductor Silicon Carbide (Si. C) is known is extremely durable under harsh conditions and has a large band-gap for use as a mechanical switch; it is therefore an optimal choice for use in nanoscale technology. This study explores the effects of the process parameters on the growth characteristics of Silicon Carbide nanowires including length, diameter, and directionality and the possibility of controlling these parameters. NT-26 NT-27 NT-31 Sample Preparation Multi-walled Carbon Nanotubes (CNTs) were used in conjunction with Silicon Monoxide (Si. O) in a Vapor-Liquid-Solid deposition method. In the base experiment, the reactants were placed in a crucible unmixed and heated to 1450 °C for 4 hours. Some of the parameters that were varied included heating time and temperature, CNT purity and size, and reactant amounts. Also, the CNTs were placed on both a polish and unpolished graphite wafer. By changing these several parameters, wire characteristics were controllable to a degree. After the wires were grown, some samples had excess carbon removed via ozone cleansing, or etched in aqua regia or N-Methyl-2 -Pyrrolidone (NMP). Results Wires formed in the process were analyzed with a variety of techniques including Scanning Electron Microscopy (SEM), XRay Diffraction (XRD), and Auger Electron Spectroscopy (AES). Measurements were taken to determine the length and diameters of the wires and a sample-wide average was used to compare results of each sample. Previously, some contaminates accumulated in the furnace and affected the results of several samples. Since this was discovered, the current objective was to narrow in on the most promising sample, NT-26, with an average length of 28 um. The results are shown in the graph below and the images to the right. NT-41 NT-43 Four-Point Measurements A four-point probe was recently purchased by the Materials Science center and will be used in conjunction with a high precision source meter to begin testing some electrical properties of the produced nanowires. Two of the probes will be used to run a current or voltage through or across a wire and the other two probes will be used to measure some parameter of interest, be it resistance, voltage, or current. These measurements will allow a better determination of whether they are suitable for use in electronics as claimed above. See the diagrams below. Newly installed 4 -point probe system in a Hitachi 3400 N Scanning Electron Microscope What’s Next? X-Ray Diffraction (XRD) results show 3 C-Si. C as the main component. NT-21 was one of the samples in which residual CNTs and Si. O were observed. Continuing efforts will explore in greater detail the effects of the growth parameters to control the wires’ characteristics. Narrowing in on the effects of smaller temperature and time differences with the carbon wafer method will help to identify the mechanism of growth which includes understanding where the wires grow from, the behavior of the catalyst, and growth rate. Acknowledgements: Dr. Anthony Wagner and Dr. Jill Ferguson Currently the nanotubes remain in large clusters and the nanowires grow on the edges and possibly in the center as well. Dispersing the nanotubes may help to get images of the nanowire growth sites because their ends would not disappear in a large cluster.