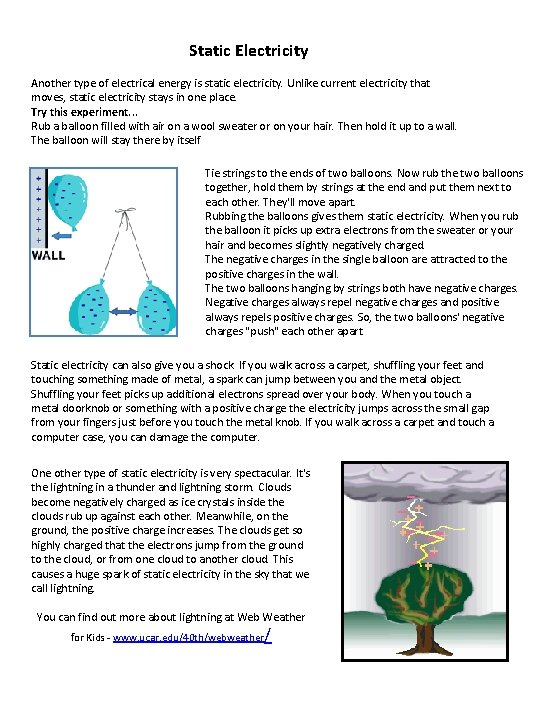 Static Electricity Another type of electrical energy is static electricity. Unlike current electricity that moves, static electricity stays in one place. Try this experiment. . . Rub a balloon filled with air on a wool sweater or on your hair. Then hold it up to a wall. The balloon will stay there by itself Tie strings to the ends of two balloons. Now rub the two balloons together, hold them by strings at the end and put them next to each other. They'll move apart. Rubbing the balloons gives them static electricity. When you rub the balloon it picks up extra electrons from the sweater or your hair and becomes slightly negatively charged. The negative charges in the single balloon are attracted to the positive charges in the wall. The two balloons hanging by strings both have negative charges. Negative charges always repel negative charges and positive always repels positive charges. So, the two balloons' negative charges "push" each other apart Static electricity can also give you a shock. If you walk across a carpet, shuffling your feet and touching something made of metal, a spark can jump between you and the metal object. Shuffling your feet picks up additional electrons spread over your body. When you touch a metal doorknob or something with a positive charge the electricity jumps across the small gap from your fingers just before you touch the metal knob. If you walk across a carpet and touch a computer case, you can damage the computer. One other type of static electricity is very spectacular. It's the lightning in a thunder and lightning storm. Clouds become negatively charged as ice crystals inside the clouds rub up against each other. Meanwhile, on the ground, the positive charge increases. The clouds get so highly charged that the electrons jump from the ground to the cloud, or from one cloud to another cloud. This causes a huge spark of static electricity in the sky that we call lightning. You can find out more about lightning at Web Weather for Kids - www. ucar. edu/40 th/webweather/