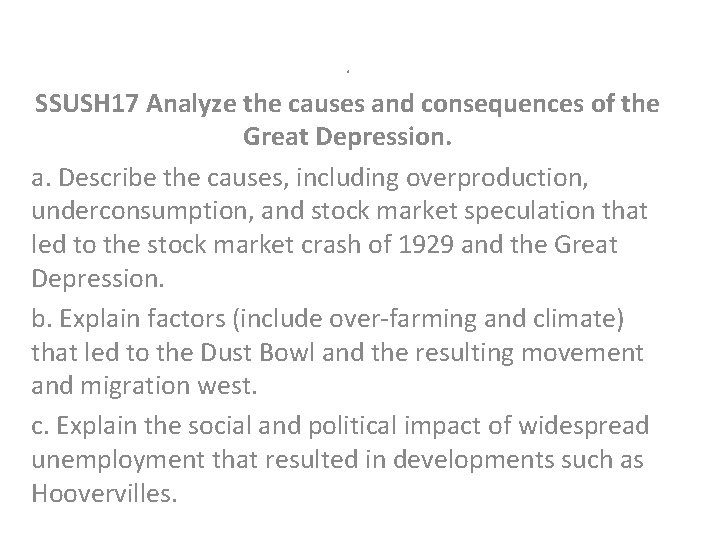 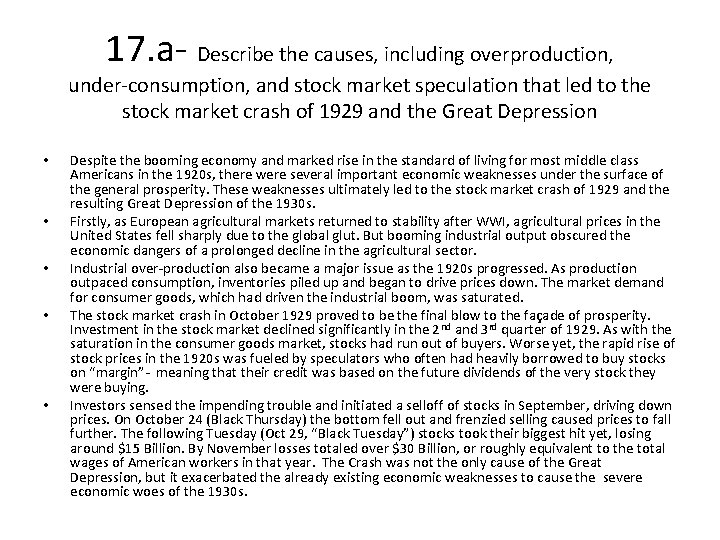 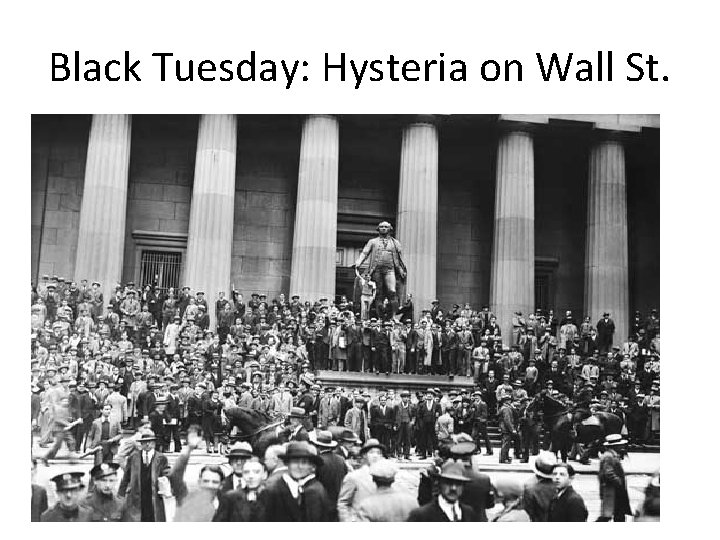 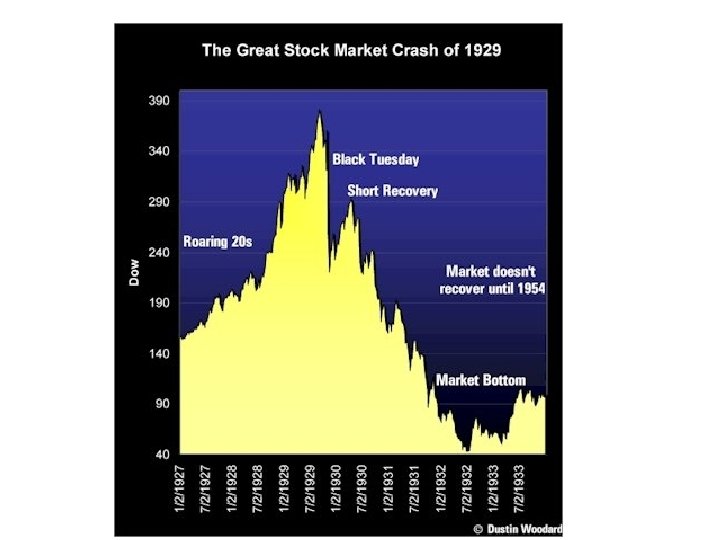 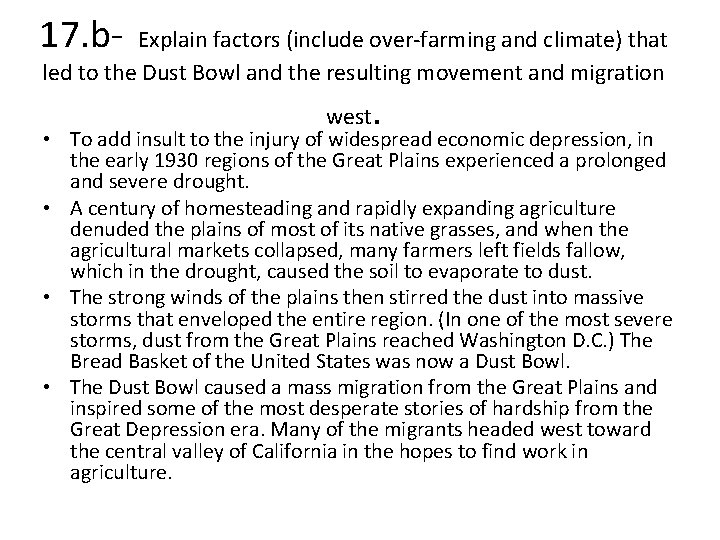 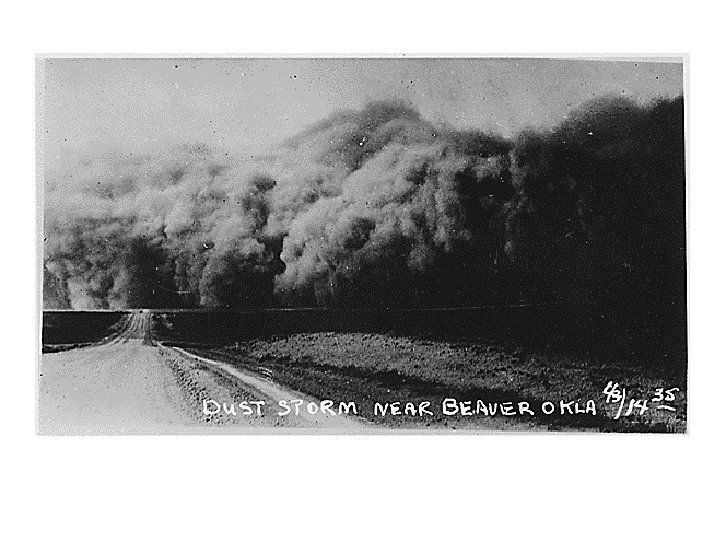 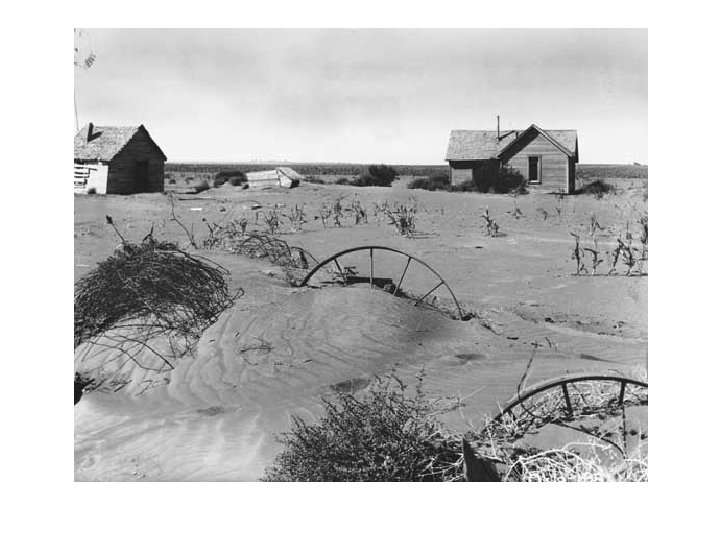 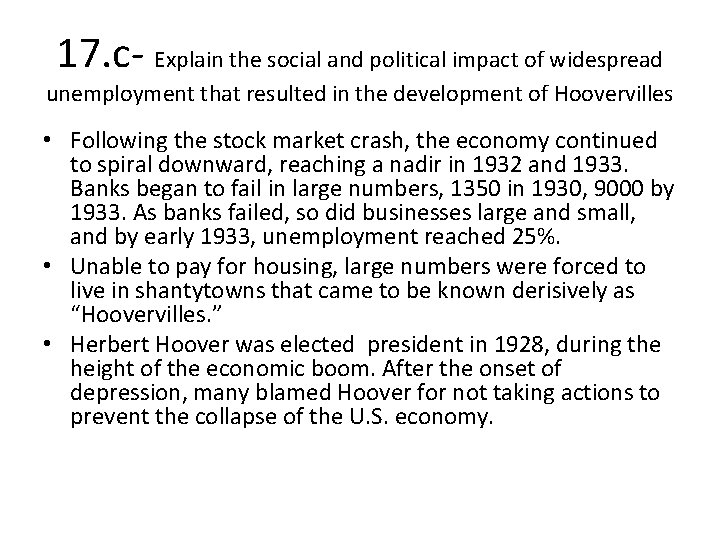 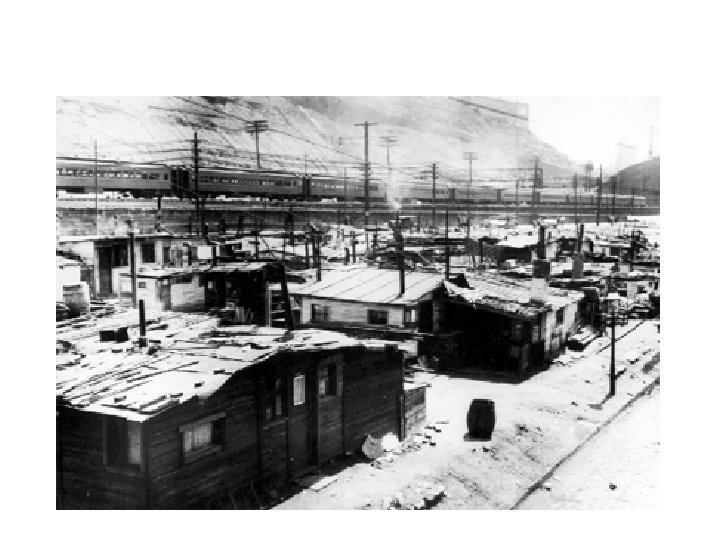 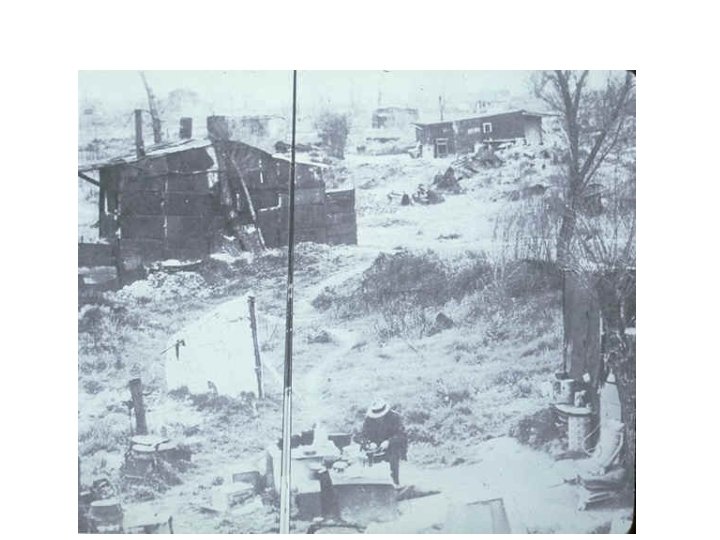 . SSUSH 17 Analyze the causes and consequences of the Great Depression. a. Describe the causes, including overproduction, underconsumption, and stock market speculation that led to the stock market crash of 1929 and the Great Depression. b. Explain factors (include over-farming and climate) that led to the Dust Bowl and the resulting movement and migration west. c. Explain the social and political impact of widespread unemployment that resulted in developments such as Hoovervilles.

17. a- Describe the causes, including overproduction, under-consumption, and stock market speculation that led to the stock market crash of 1929 and the Great Depression • • • Despite the booming economy and marked rise in the standard of living for most middle class Americans in the 1920 s, there were several important economic weaknesses under the surface of the general prosperity. These weaknesses ultimately led to the stock market crash of 1929 and the resulting Great Depression of the 1930 s. Firstly, as European agricultural markets returned to stability after WWI, agricultural prices in the United States fell sharply due to the global glut. But booming industrial output obscured the economic dangers of a prolonged decline in the agricultural sector. Industrial over-production also became a major issue as the 1920 s progressed. As production outpaced consumption, inventories piled up and began to drive prices down. The market demand for consumer goods, which had driven the industrial boom, was saturated. The stock market crash in October 1929 proved to be the final blow to the façade of prosperity. Investment in the stock market declined significantly in the 2 nd and 3 rd quarter of 1929. As with the saturation in the consumer goods market, stocks had run out of buyers. Worse yet, the rapid rise of stock prices in the 1920 s was fueled by speculators who often had heavily borrowed to buy stocks on “margin”- meaning that their credit was based on the future dividends of the very stock they were buying. Investors sensed the impending trouble and initiated a selloff of stocks in September, driving down prices. On October 24 (Black Thursday) the bottom fell out and frenzied selling caused prices to fall further. The following Tuesday (Oct 29, “Black Tuesday”) stocks took their biggest hit yet, losing around $15 Billion. By November losses totaled over $30 Billion, or roughly equivalent to the total wages of American workers in that year. The Crash was not the only cause of the Great Depression, but it exacerbated the already existing economic weaknesses to cause the severe economic woes of the 1930 s.

17. b- Explain factors (include over-farming and climate) that led to the Dust Bowl and the resulting movement and migration west . • To add insult to the injury of widespread economic depression, in the early 1930 regions of the Great Plains experienced a prolonged and severe drought. • A century of homesteading and rapidly expanding agriculture denuded the plains of most of its native grasses, and when the agricultural markets collapsed, many farmers left fields fallow, which in the drought, caused the soil to evaporate to dust. • The strong winds of the plains then stirred the dust into massive storms that enveloped the entire region. (In one of the most severe storms, dust from the Great Plains reached Washington D. C. ) The Bread Basket of the United States was now a Dust Bowl. • The Dust Bowl caused a mass migration from the Great Plains and inspired some of the most desperate stories of hardship from the Great Depression era. Many of the migrants headed west toward the central valley of California in the hopes to find work in agriculture.

17. c- Explain the social and political impact of widespread unemployment that resulted in the development of Hoovervilles • Following the stock market crash, the economy continued to spiral downward, reaching a nadir in 1932 and 1933. Banks began to fail in large numbers, 1350 in 1930, 9000 by 1933. As banks failed, so did businesses large and small, and by early 1933, unemployment reached 25%. • Unable to pay for housing, large numbers were forced to live in shantytowns that came to be known derisively as “Hoovervilles. ” • Herbert Hoover was elected president in 1928, during the height of the economic boom. After the onset of depression, many blamed Hoover for not taking actions to prevent the collapse of the U. S. economy. 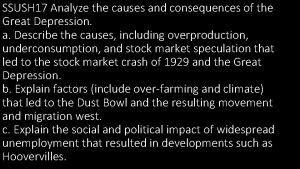 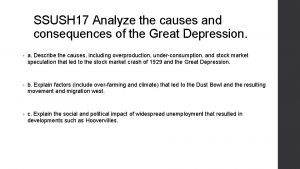 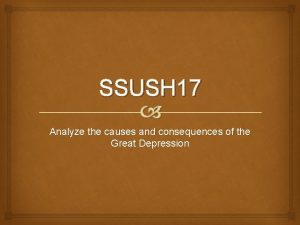 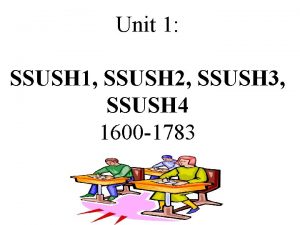 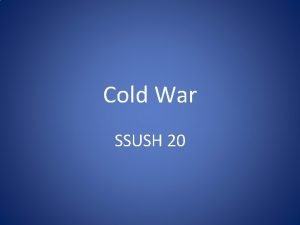 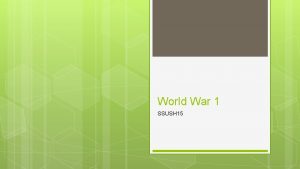 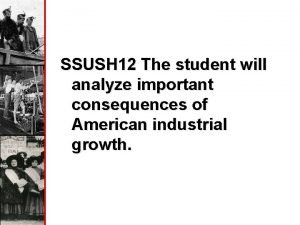 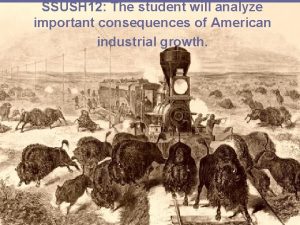 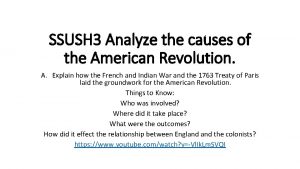 SSUSH 3 Analyze the causes of the American