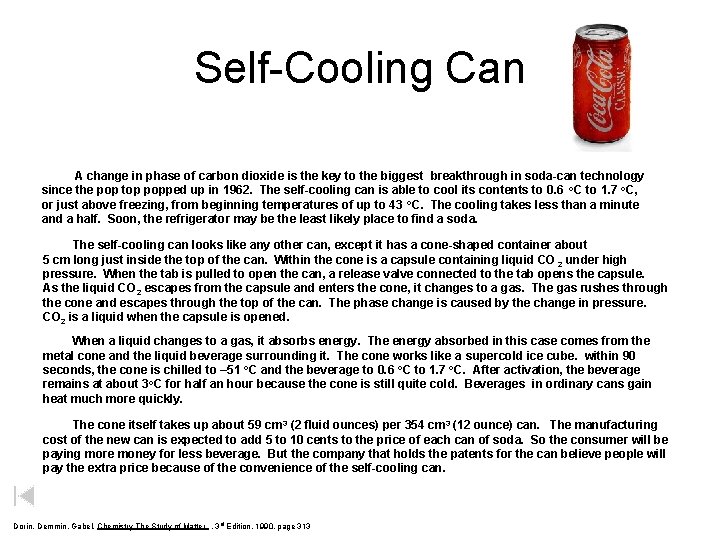 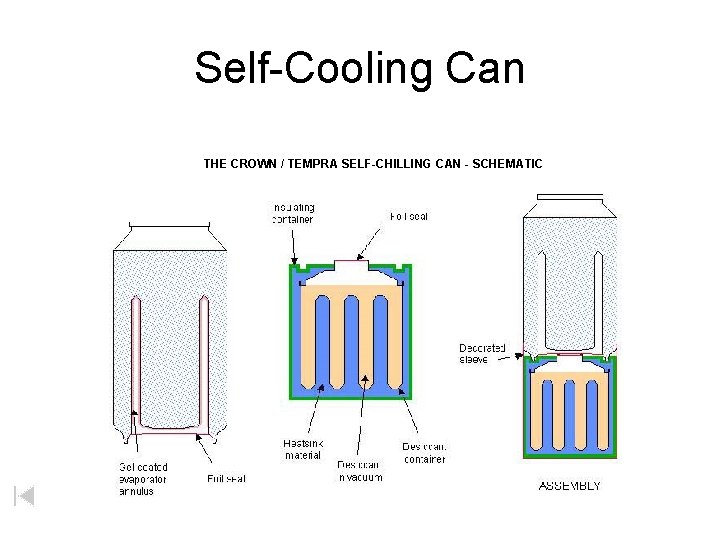 Self-Cooling Can A change in phase of carbon dioxide is the key to the biggest breakthrough in soda-can technology since the pop top popped up in 1962. The self-cooling can is able to cool its contents to 0. 6 o. C to 1. 7 o. C, or just above freezing, from beginning temperatures of up to 43 o. C. The cooling takes less than a minute and a half. Soon, the refrigerator may be the least likely place to find a soda. The self-cooling can looks like any other can, except it has a cone-shaped container about 5 cm long just inside the top of the can. Within the cone is a capsule containing liquid CO 2 under high pressure. When the tab is pulled to open the can, a release valve connected to the tab opens the capsule. As the liquid CO 2 escapes from the capsule and enters the cone, it changes to a gas. The gas rushes through the cone and escapes through the top of the can. The phase change is caused by the change in pressure. CO 2 is a liquid when the capsule is opened. When a liquid changes to a gas, it absorbs energy. The energy absorbed in this case comes from the metal cone and the liquid beverage surrounding it. The cone works like a supercold ice cube. within 90 seconds, the cone is chilled to – 51 o. C and the beverage to 0. 6 o. C to 1. 7 o. C. After activation, the beverage remains at about 3 o. C for half an hour because the cone is still quite cold. Beverages in ordinary cans gain heat much more quickly. The cone itself takes up about 59 cm 3 (2 fluid ounces) per 354 cm 3 (12 ounce) can. The manufacturing cost of the new can is expected to add 5 to 10 cents to the price of each can of soda. So the consumer will be paying more money for less beverage. But the company that holds the patents for the can believe people will pay the extra price because of the convenience of the self-cooling can. Dorin, Demmin, Gabel, Chemistry The Study of Matter , 3 rd Edition, 1990, page 313

Self-Cooling Can THE CROWN / TEMPRA SELF-CHILLING CAN - SCHEMATIC 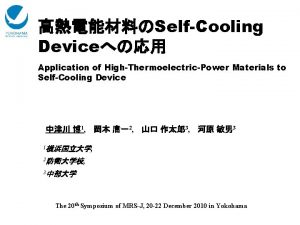