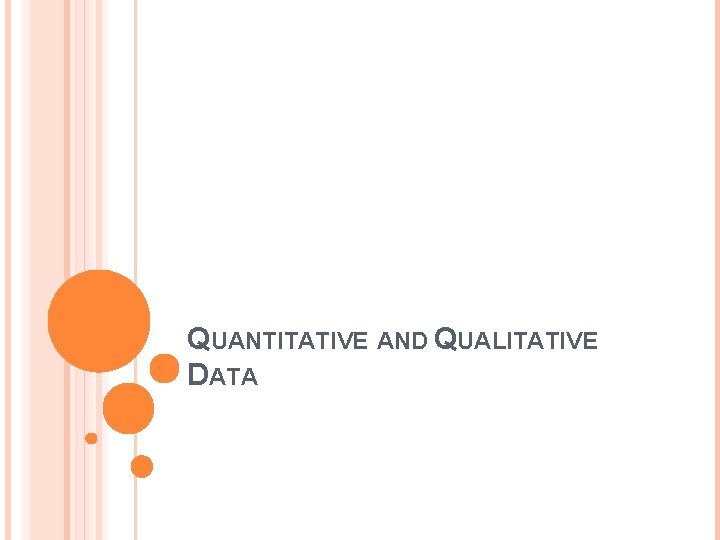 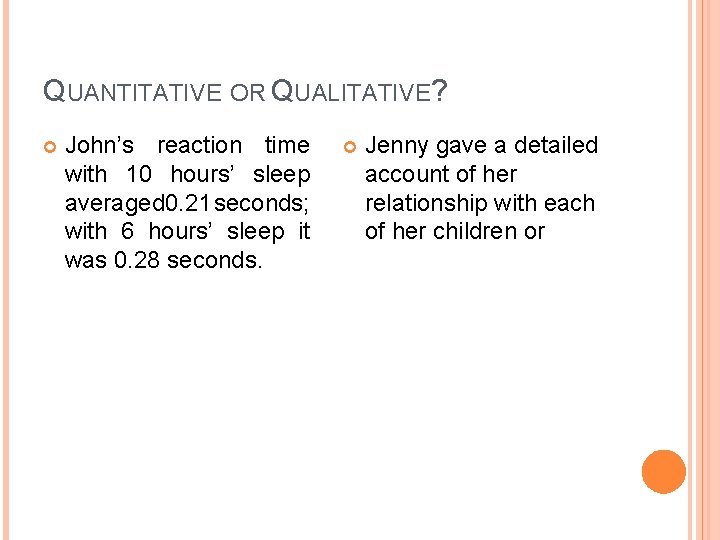 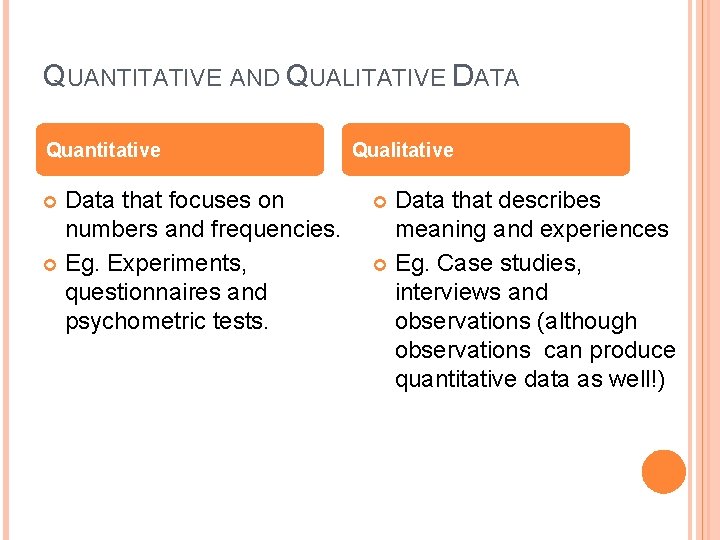 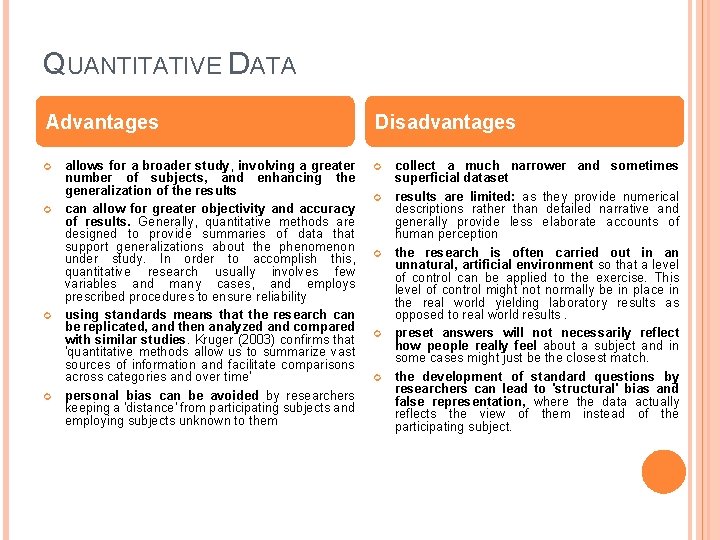 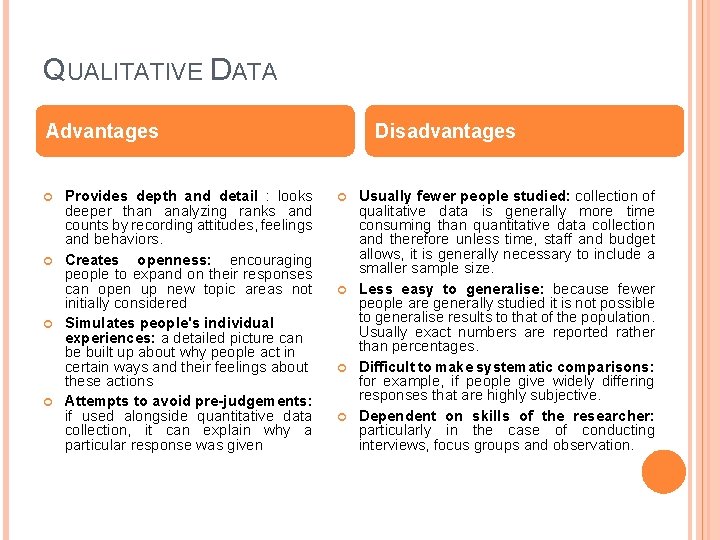 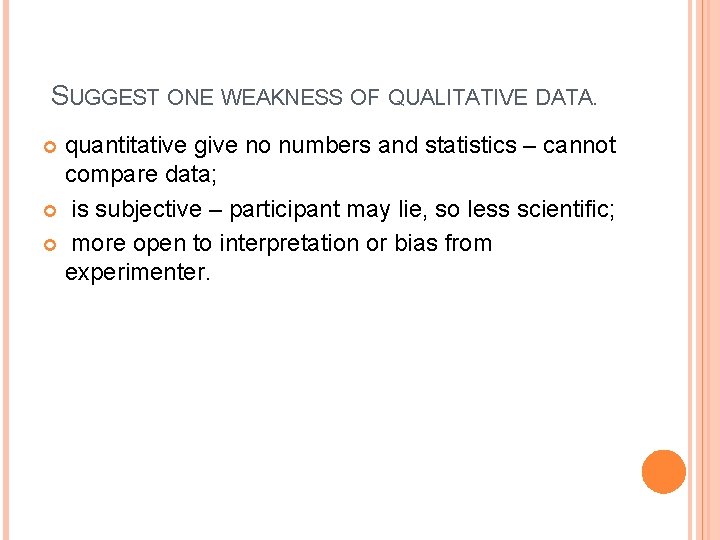 QUANTITATIVE OR QUALITATIVE? John’s reaction time with 10 hours’ sleep averaged 0. 21 seconds; with 6 hours’ sleep it was 0. 28 seconds. Jenny gave a detailed account of her relationship with each of her children or

QUANTITATIVE DATA Advantages allows for a broader study, involving a greater number of subjects, and enhancing the generalization of the results can allow for greater objectivity and accuracy of results. Generally, quantitative methods are designed to provide summaries of data that support generalizations about the phenomenon under study. In order to accomplish this, quantitative research usually involves few variables and many cases, and employs prescribed procedures to ensure reliability using standards means that the research can be replicated, and then analyzed and compared with similar studies. Kruger (2003) confirms that 'quantitative methods allow us to summarize vast sources of information and facilitate comparisons across categories and over time' personal bias can be avoided by researchers keeping a 'distance' from participating subjects and employing subjects unknown to them Disadvantages collect a much narrower and sometimes superficial dataset results are limited: as they provide numerical descriptions rather than detailed narrative and generally provide less elaborate accounts of human perception the research is often carried out in an unnatural, artificial environment so that a level of control can be applied to the exercise. This level of control might normally be in place in the real world yielding laboratory results as opposed to real world results. preset answers will not necessarily reflect how people really feel about a subject and in some cases might just be the closest match. the development of standard questions by researchers can lead to 'structural' bias and false representation, where the data actually reflects the view of them instead of the participating subject.

QUALITATIVE DATA Advantages Provides depth and detail : looks deeper than analyzing ranks and counts by recording attitudes, feelings and behaviors. Creates openness: encouraging people to expand on their responses can open up new topic areas not initially considered Simulates people's individual experiences: a detailed picture can be built up about why people act in certain ways and their feelings about these actions Attempts to avoid pre-judgements: if used alongside quantitative data collection, it can explain why a particular response was given Disadvantages Usually fewer people studied: collection of qualitative data is generally more time consuming than quantitative data collection and therefore unless time, staff and budget allows, it is generally necessary to include a smaller sample size. Less easy to generalise: because fewer people are generally studied it is not possible to generalise results to that of the population. Usually exact numbers are reported rather than percentages. Difficult to make systematic comparisons: for example, if people give widely differing responses that are highly subjective. Dependent on skills of the researcher: particularly in the case of conducting interviews, focus groups and observation.

SUGGEST ONE WEAKNESS OF QUALITATIVE DATA. quantitative give no numbers and statistics – cannot compare data; is subjective – participant may lie, so less scientific; more open to interpretation or bias from experimenter. 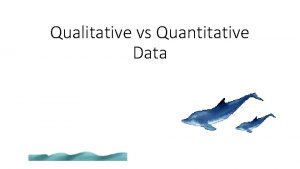 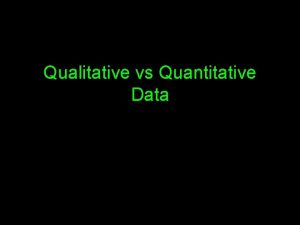 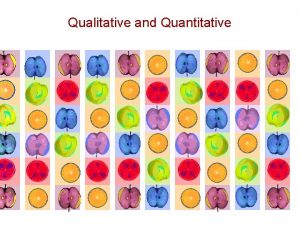 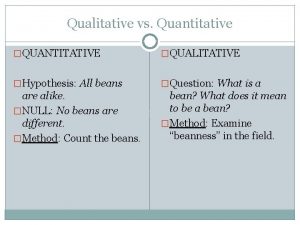 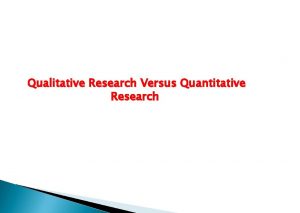