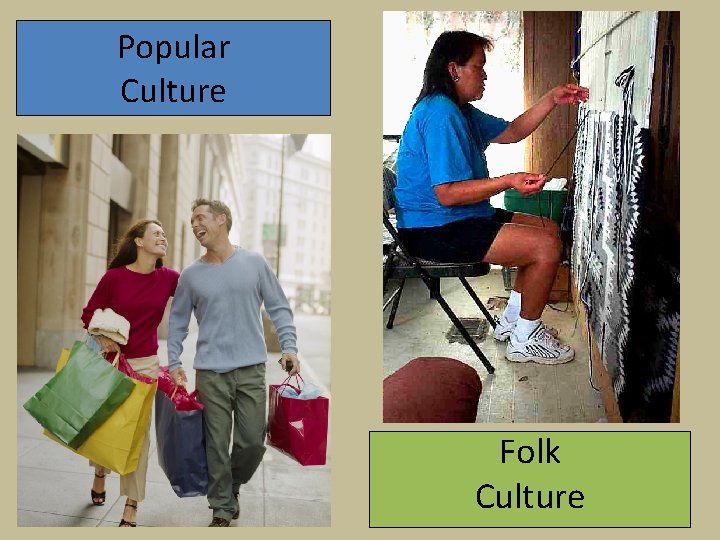 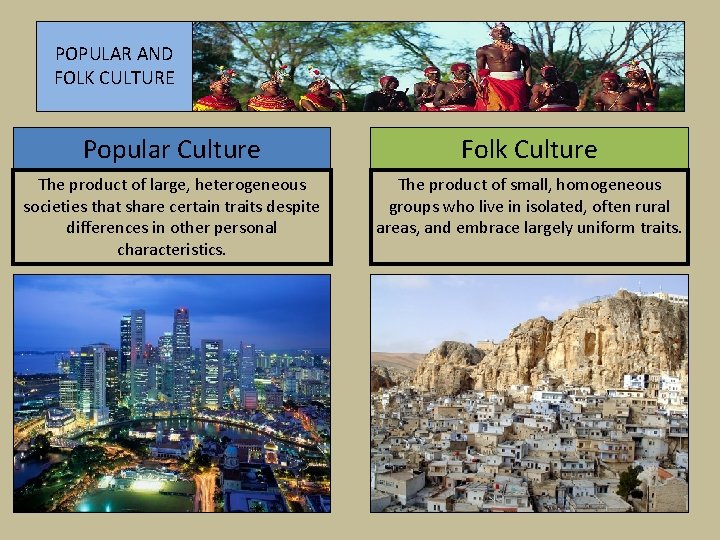 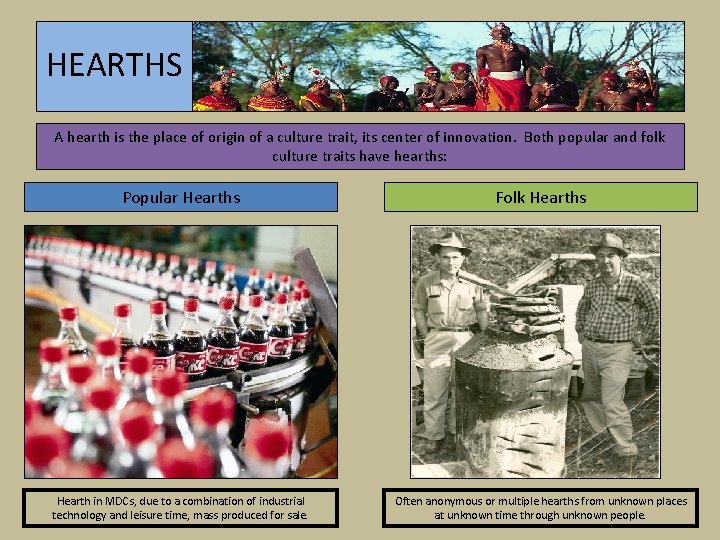 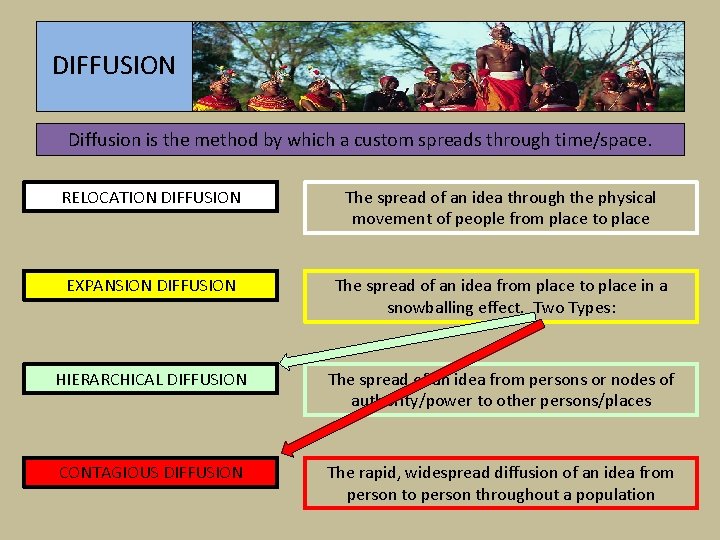 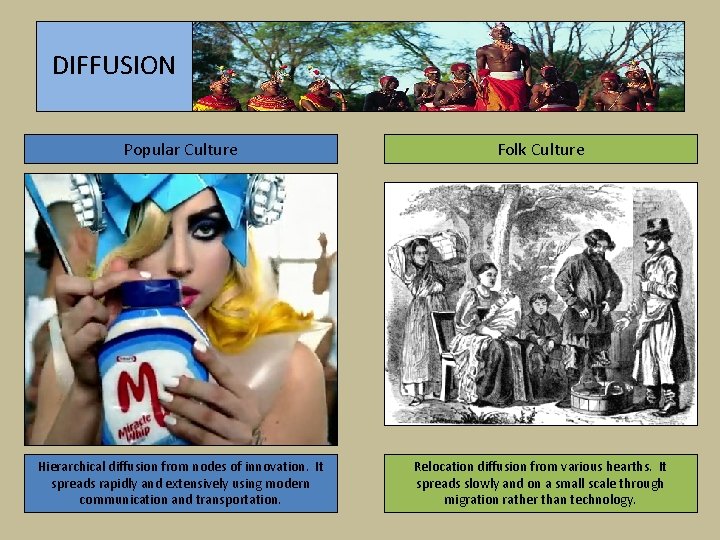 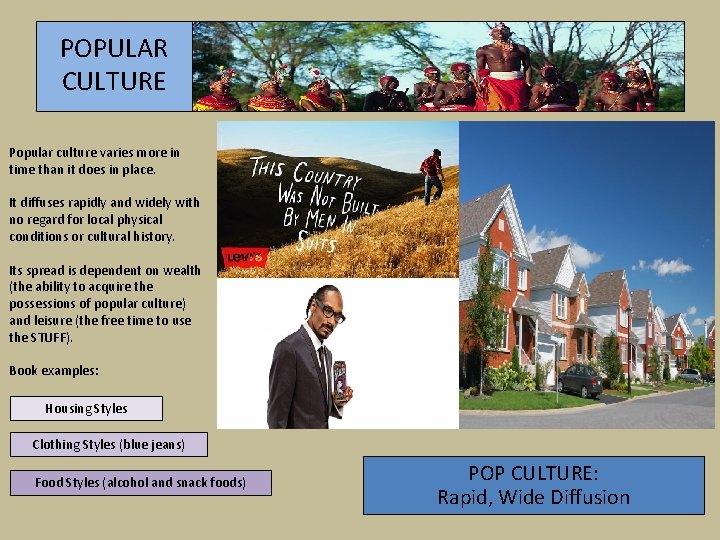 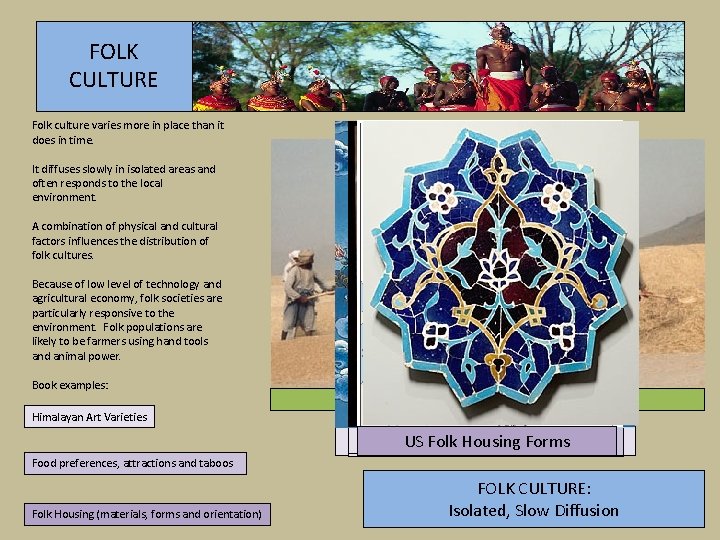 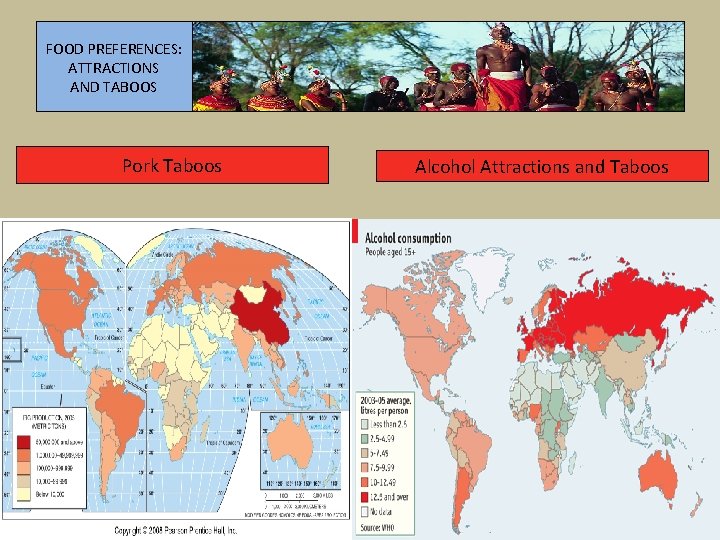 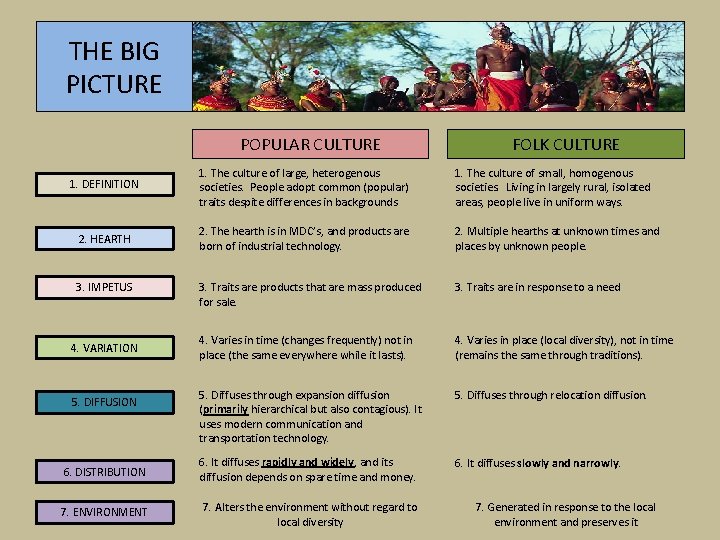 HEARTHS A hearth is the place of origin of a culture trait, its center of innovation. Both popular and folk culture traits have hearths: Popular Hearths Folk Hearths Hearth in MDCs, due to a combination of industrial technology and leisure time, mass produced for sale. Often anonymous or multiple hearths from unknown places at unknown time through unknown people.

DIFFUSION Popular Culture Folk Culture Hierarchical diffusion from nodes of innovation. It spreads rapidly and extensively using modern communication and transportation. Relocation diffusion from various hearths. It spreads slowly and on a small scale through migration rather than technology.

POPULAR CULTURE Popular culture varies more in time than it does in place. It diffuses rapidly and widely with no regard for local physical conditions or cultural history. Its spread is dependent on wealth (the ability to acquire the possessions of popular culture) and leisure (the free time to use the STUFF). Book examples: Housing Styles Clothing Styles (blue jeans) Food Styles (alcohol and snack foods) POP CULTURE: Rapid, Wide Diffusion

THE BIG PICTURE POPULAR CULTURE FOLK CULTURE 1. DEFINITION 1. The culture of large, heterogenous societies. People adopt common (popular) traits despite differences in backgrounds 1. The culture of small, homogenous societies. Living in largely rural, isolated areas, people live in uniform ways. 2. HEARTH 2. The hearth is in MDC’s, and products are born of industrial technology. 2. Multiple hearths at unknown times and places by unknown people. 3. Traits are products that are mass produced for sale. 3. Traits are in response to a need 4. Varies in time (changes frequently) not in place (the same everywhere while it lasts). 4. Varies in place (local diversity), not in time (remains the same through traditions). 5. Diffuses through expansion diffusion (primarily hierarchical but also contagious). It uses modern communication and transportation technology. 5. Diffuses through relocation diffusion. 6. DISTRIBUTION 6. It diffuses rapidly and widely, and its diffusion depends on spare time and money. 6. It diffuses slowly and narrowly. 7. ENVIRONMENT 7. Alters the environment without regard to local diversity 3. IMPETUS 4. VARIATION 5. DIFFUSION 7. Generated in response to the local environment and preserves it 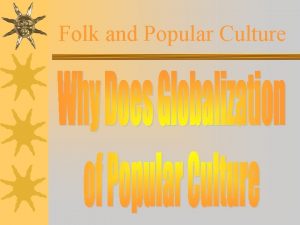 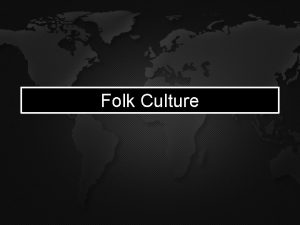 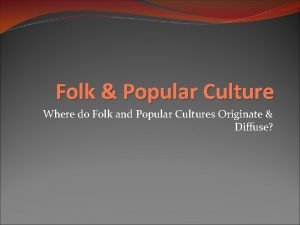 Folk Popular Culture Where do Folk and Popular 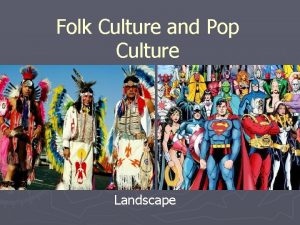 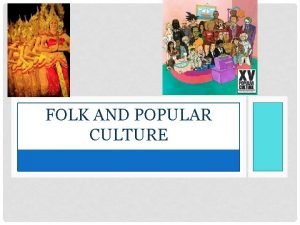 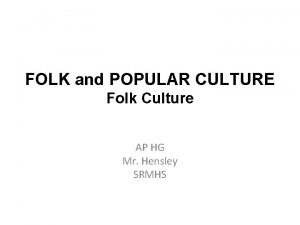 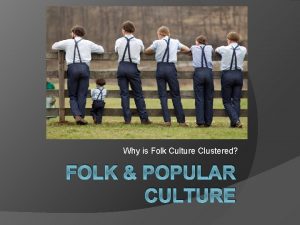 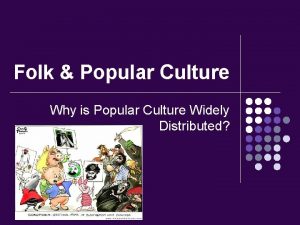