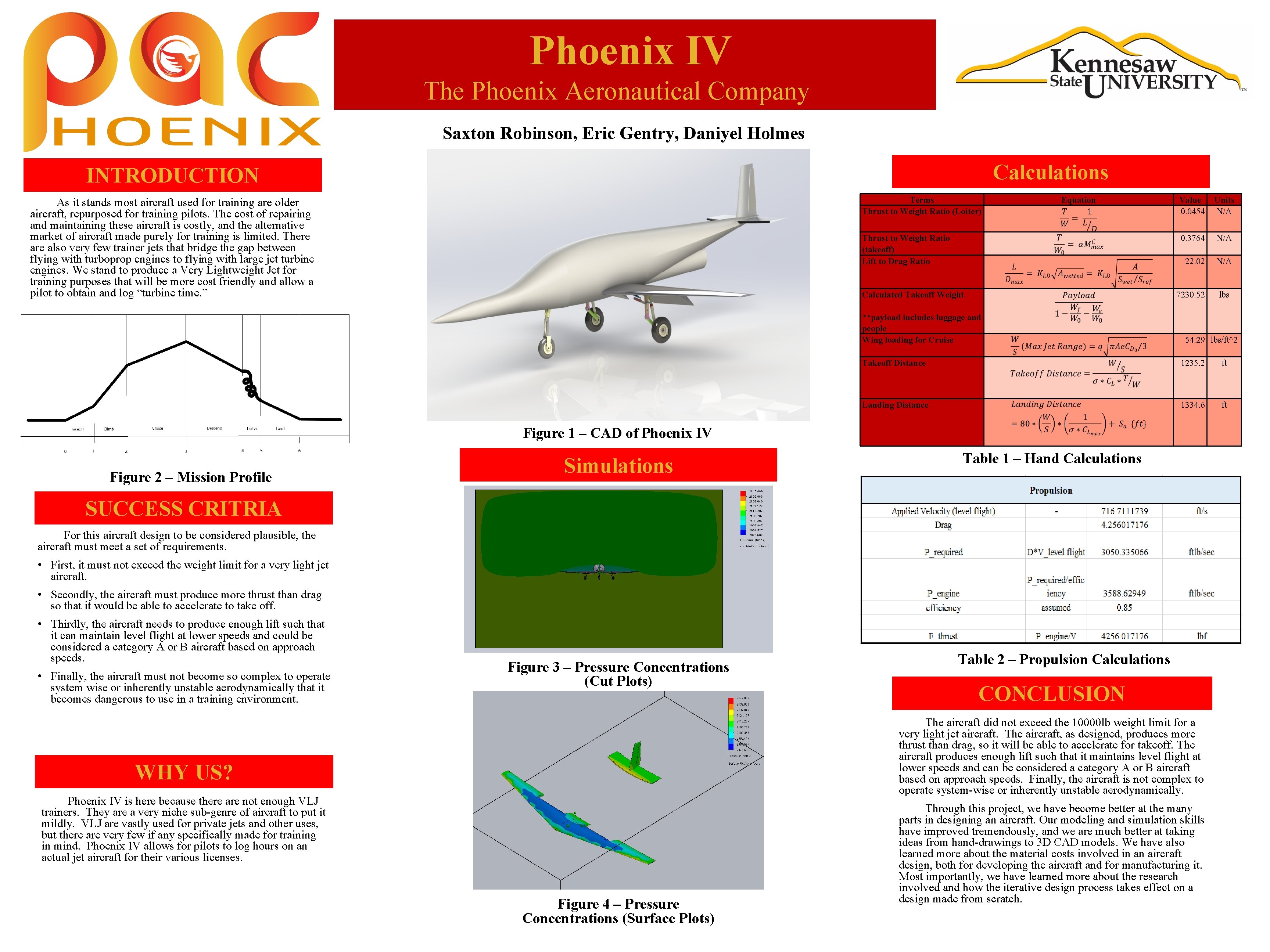 Phoenix IV The Phoenix Aeronautical Company Saxton Robinson, Eric Gentry, Daniyel Holmes Calculations INTRODUCTION Terms Thrust to Weight Ratio (Loiter) As it stands most aircraft used for training are older aircraft, repurposed for training pilots. The cost of repairing and maintaining these aircraft is costly, and the alternative market of aircraft made purely for training is limited. There also very few trainer jets that bridge the gap between flying with turboprop engines to flying with large jet turbine engines. We stand to produce a Very Lightweight Jet for training purposes that will be more cost friendly and allow a pilot to obtain and log “turbine time. ” Equation Thrust to Weight Ratio (takeoff) Lift to Drag Ratio Calculated Takeoff Weight **payload includes luggage and people Wing loading for Cruise Value 0. 0454 Units N/A 0. 3764 N/A 22. 02 N/A 7230. 52 lbs 54. 29 lbs/ft^2 Takeoff Distance 1235. 2 ft Landing Distance 1334. 6 ft Figure 1 – CAD of Phoenix IV Figure 2 – Mission Profile Simulations Table 1 – Hand Calculations SUCCESS CRITRIA For this aircraft design to be considered plausible, the aircraft must meet a set of requirements. • First, it must not exceed the weight limit for a very light jet aircraft. • Secondly, the aircraft must produce more thrust than drag so that it would be able to accelerate to take off. • Thirdly, the aircraft needs to produce enough lift such that it can maintain level flight at lower speeds and could be considered a category A or B aircraft based on approach speeds. • Finally, the aircraft must not become so complex to operate system wise or inherently unstable aerodynamically that it becomes dangerous to use in a training environment. Figure 3 – Pressure Concentrations (Cut Plots) Table 2 – Propulsion Calculations CONCLUSION The aircraft did not exceed the 10000 lb weight limit for a very light jet aircraft. The aircraft, as designed, produces more thrust than drag, so it will be able to accelerate for takeoff. The aircraft produces enough lift such that it maintains level flight at lower speeds and can be considered a category A or B aircraft based on approach speeds. Finally, the aircraft is not complex to operate system-wise or inherently unstable aerodynamically. WHY US? Phoenix IV is here because there are not enough VLJ trainers. They are a very niche sub-genre of aircraft to put it mildly. VLJ are vastly used for private jets and other uses, but there are very few if any specifically made for training in mind. Phoenix IV allows for pilots to log hours on an actual jet aircraft for their various licenses. Figure 4 – Pressure Concentrations (Surface Plots) Through this project, we have become better at the many parts in designing an aircraft. Our modeling and simulation skills have improved tremendously, and we are much better at taking ideas from hand-drawings to 3 D CAD models. We have also learned more about the material costs involved in an aircraft design, both for developing the aircraft and for manufacturing it. Most importantly, we have learned more about the research involved and how the iterative design process takes effect on a design made from scratch.