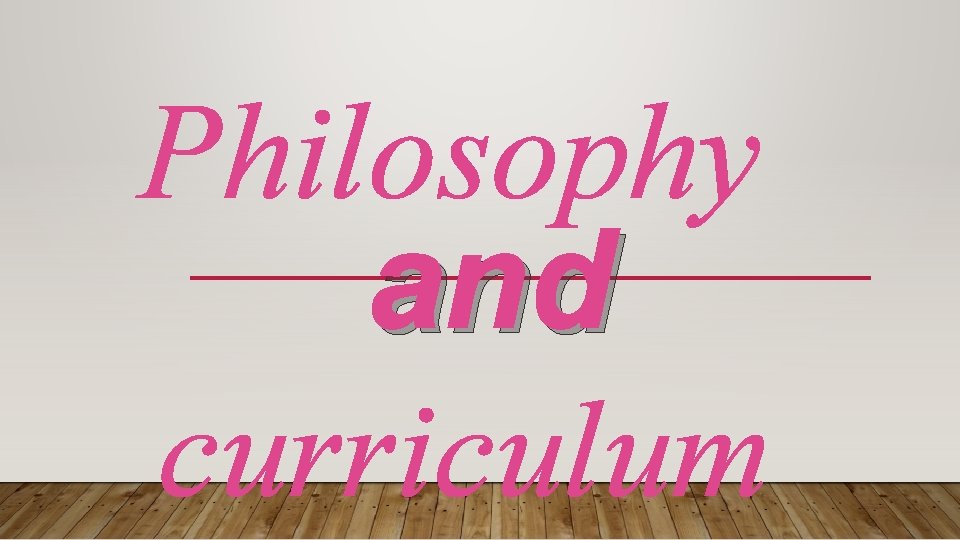 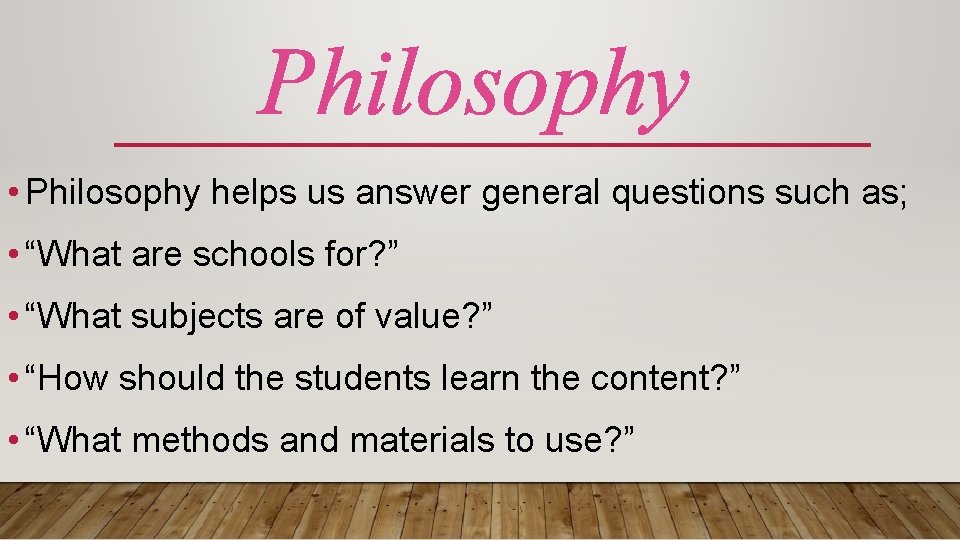 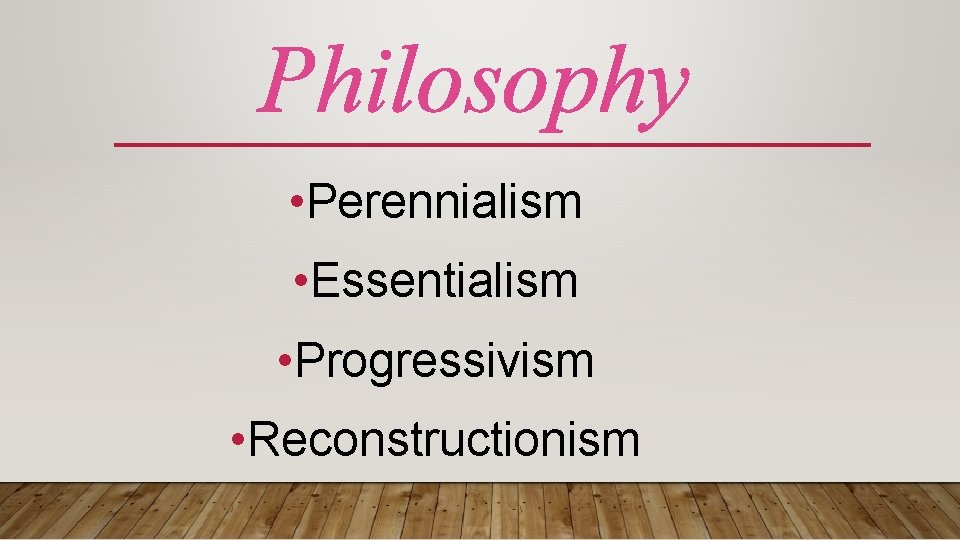 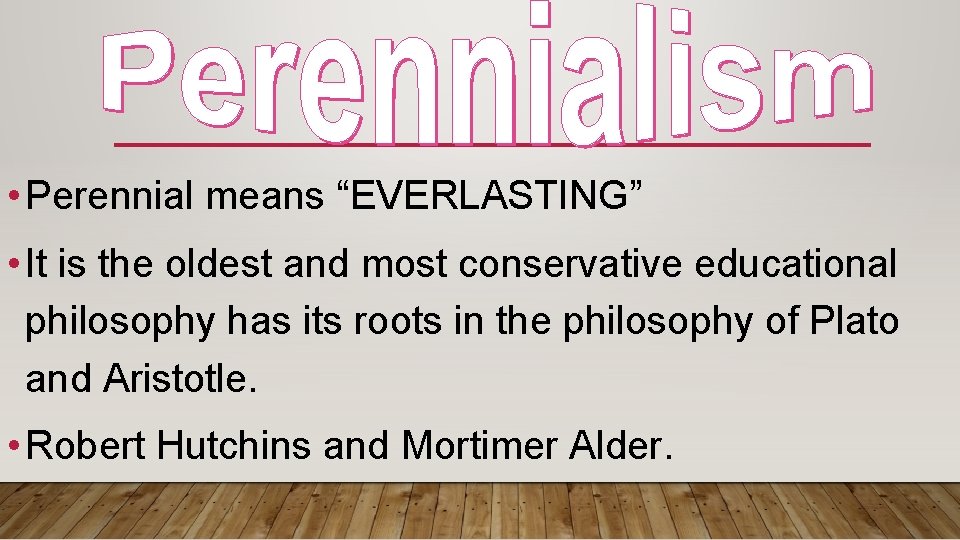 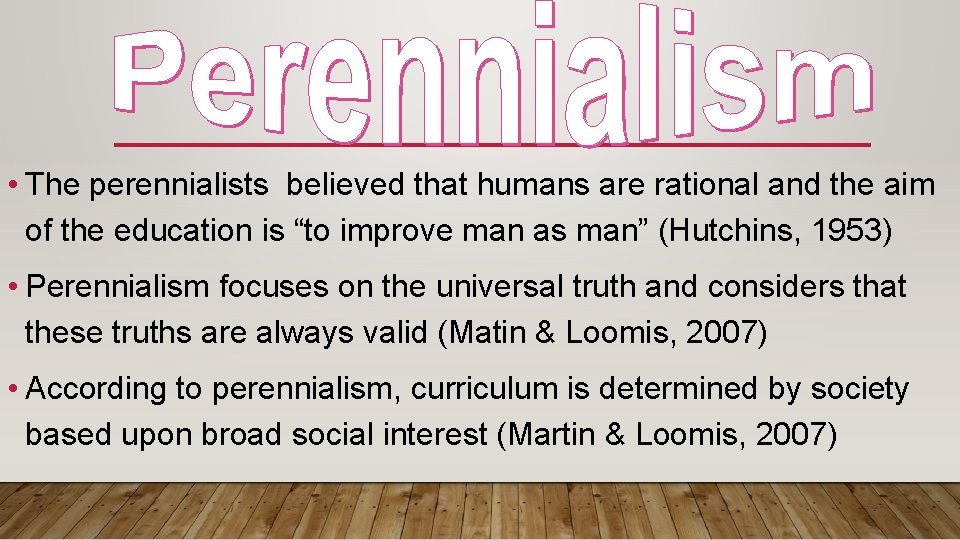 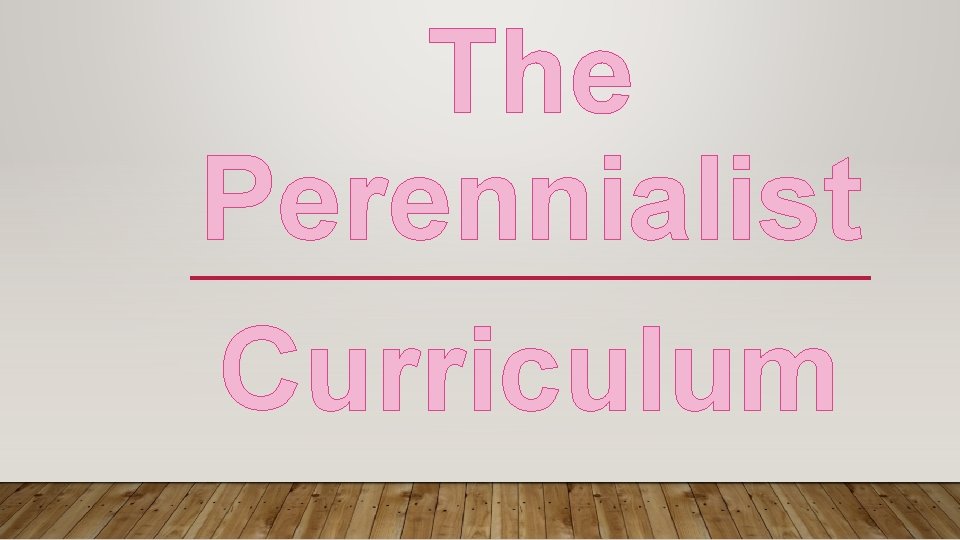 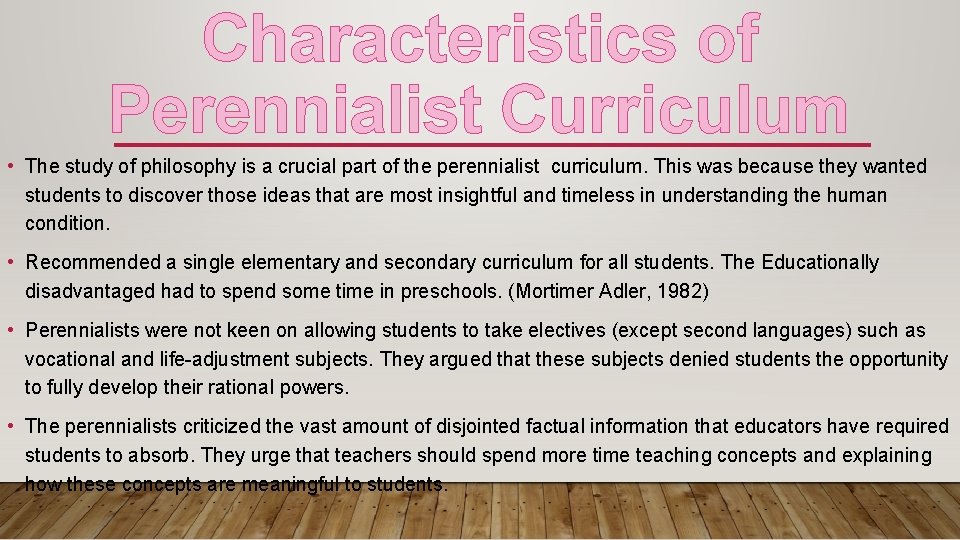 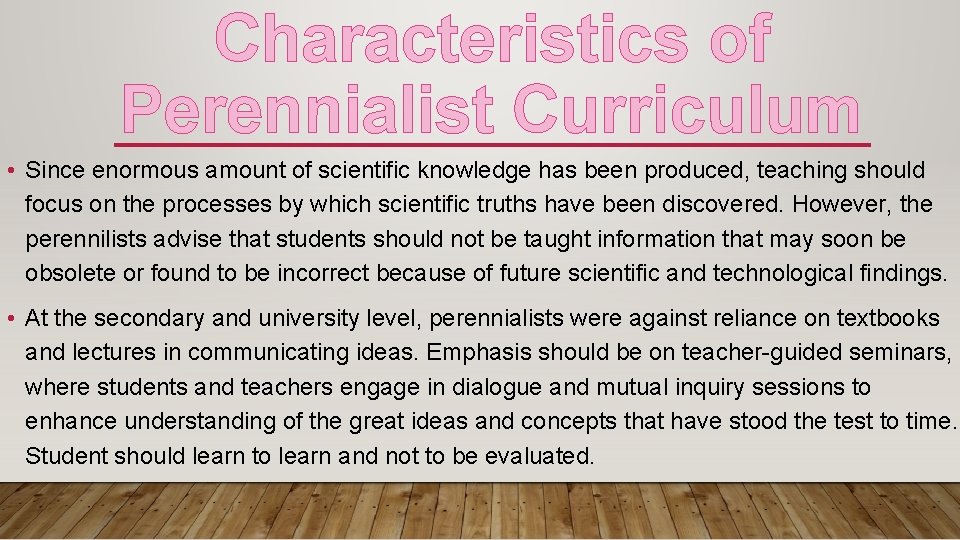 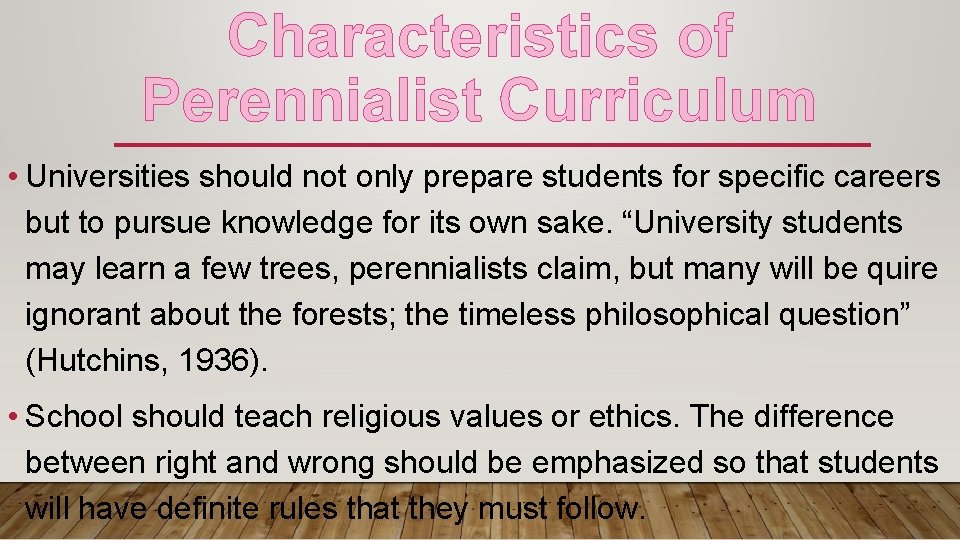 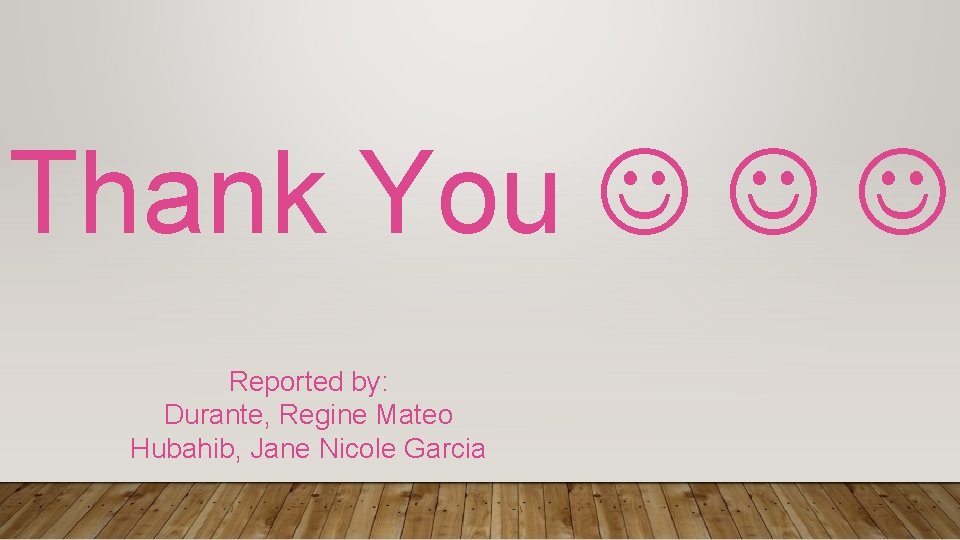 Philosophy • Philosophy helps us answer general questions such as; • “What are schools for? ” • “What subjects are of value? ” • “How should the students learn the content? ” • “What methods and materials to use? ”

• Perennial means “EVERLASTING” • It is the oldest and most conservative educational philosophy has its roots in the philosophy of Plato and Aristotle. • Robert Hutchins and Mortimer Alder.

• The perennialists believed that humans are rational and the aim of the education is “to improve man as man” (Hutchins, 1953) • Perennialism focuses on the universal truth and considers that these truths are always valid (Matin & Loomis, 2007) • According to perennialism, curriculum is determined by society based upon broad social interest (Martin & Loomis, 2007)

Characteristics of Perennialist Curriculum • The study of philosophy is a crucial part of the perennialist curriculum. This was because they wanted students to discover those ideas that are most insightful and timeless in understanding the human condition. • Recommended a single elementary and secondary curriculum for all students. The Educationally disadvantaged had to spend some time in preschools. (Mortimer Adler, 1982) • Perennialists were not keen on allowing students to take electives (except second languages) such as vocational and life-adjustment subjects. They argued that these subjects denied students the opportunity to fully develop their rational powers. • The perennialists criticized the vast amount of disjointed factual information that educators have required students to absorb. They urge that teachers should spend more time teaching concepts and explaining how these concepts are meaningful to students.

Characteristics of Perennialist Curriculum • Since enormous amount of scientific knowledge has been produced, teaching should focus on the processes by which scientific truths have been discovered. However, the perennilists advise that students should not be taught information that may soon be obsolete or found to be incorrect because of future scientific and technological findings. • At the secondary and university level, perennialists were against reliance on textbooks and lectures in communicating ideas. Emphasis should be on teacher-guided seminars, where students and teachers engage in dialogue and mutual inquiry sessions to enhance understanding of the great ideas and concepts that have stood the test to time. Student should learn to learn and not to be evaluated.

Characteristics of Perennialist Curriculum • Universities should not only prepare students for specific careers but to pursue knowledge for its own sake. “University students may learn a few trees, perennialists claim, but many will be quire ignorant about the forests; the timeless philosophical question” (Hutchins, 1936). • School should teach religious values or ethics. The difference between right and wrong should be emphasized so that students will have definite rules that they must follow. 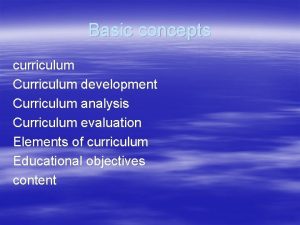 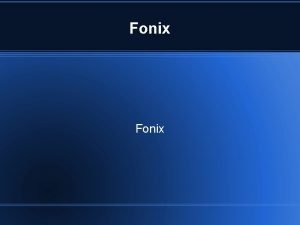 Fonix Why phonics Helps with pronunciation Helps with 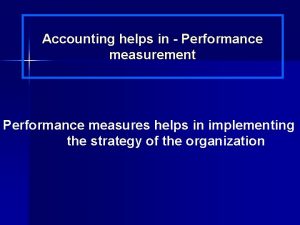 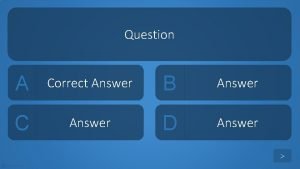 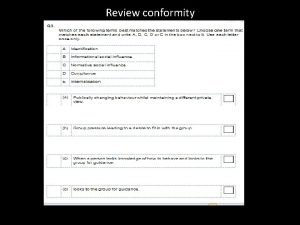 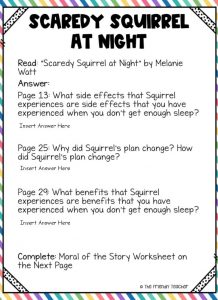 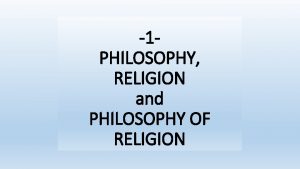 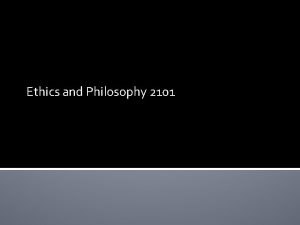 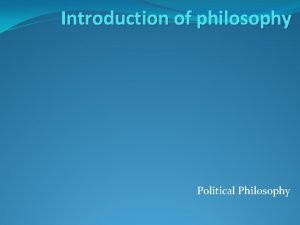