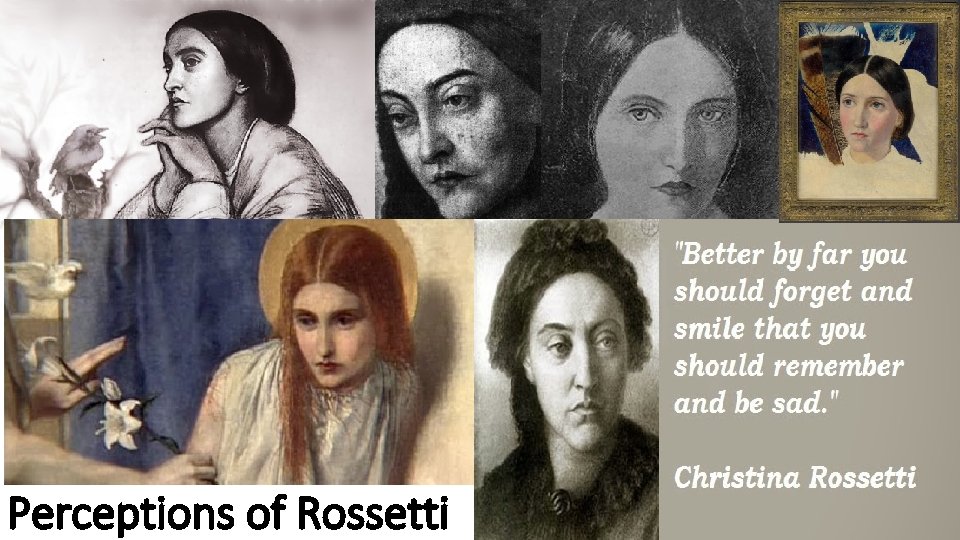 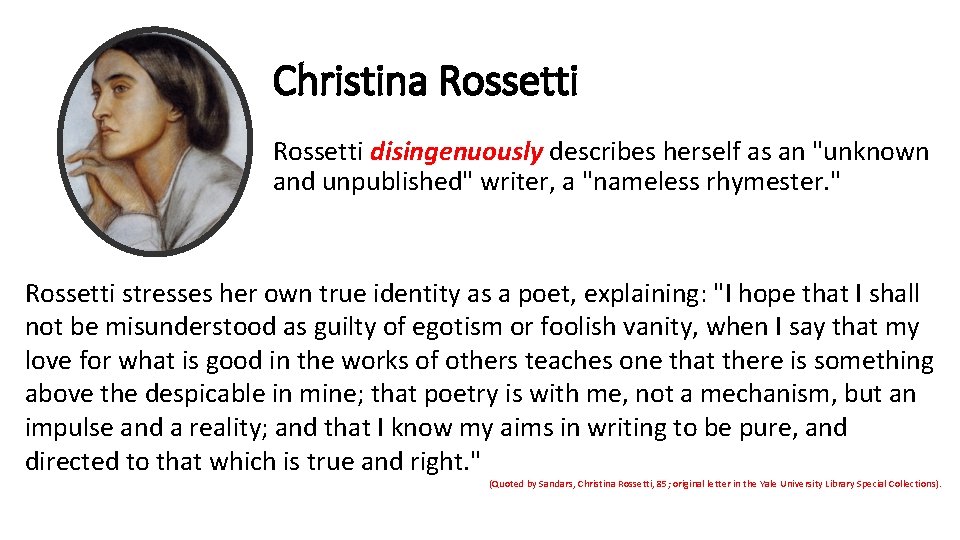 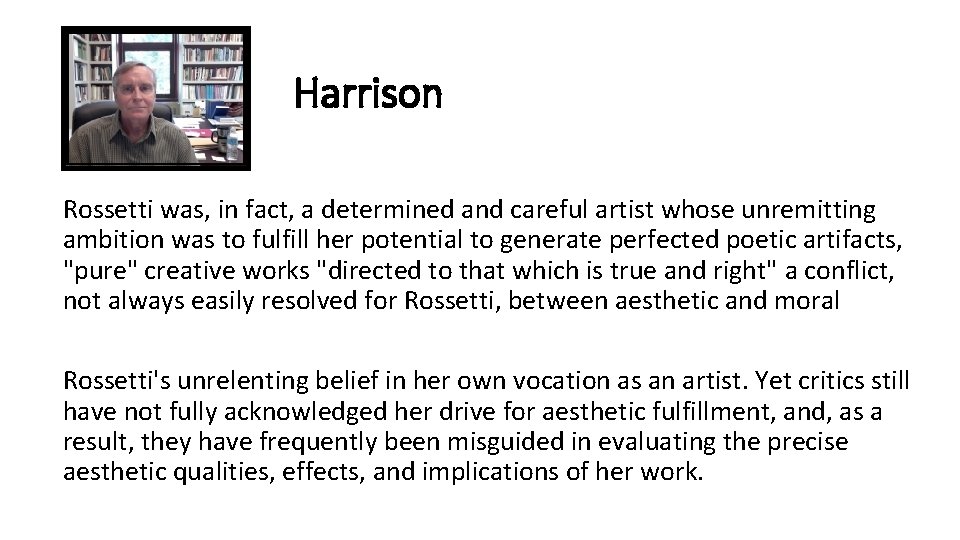 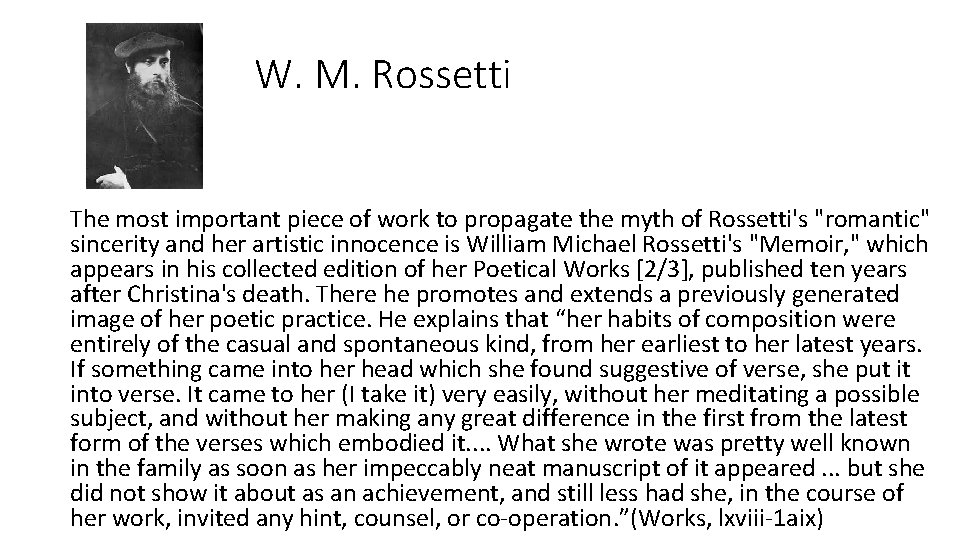 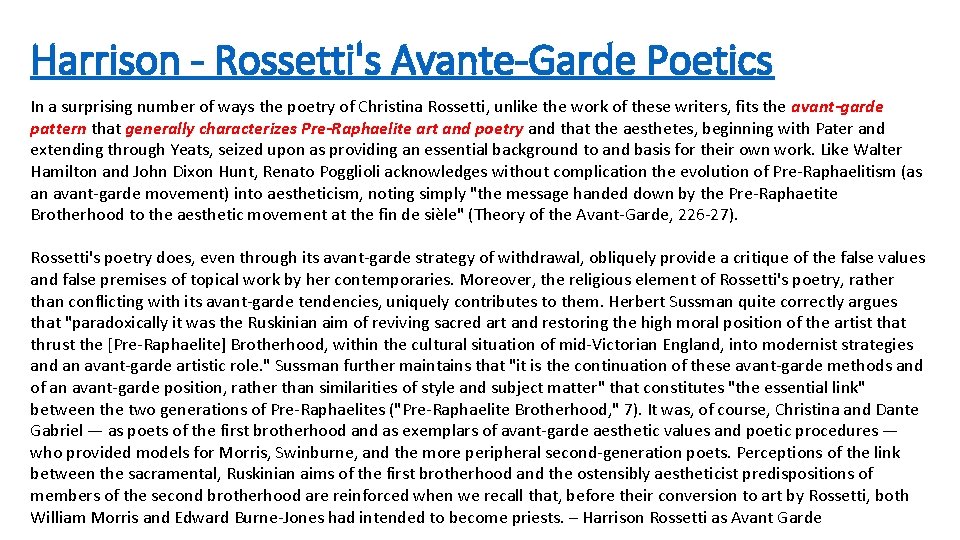 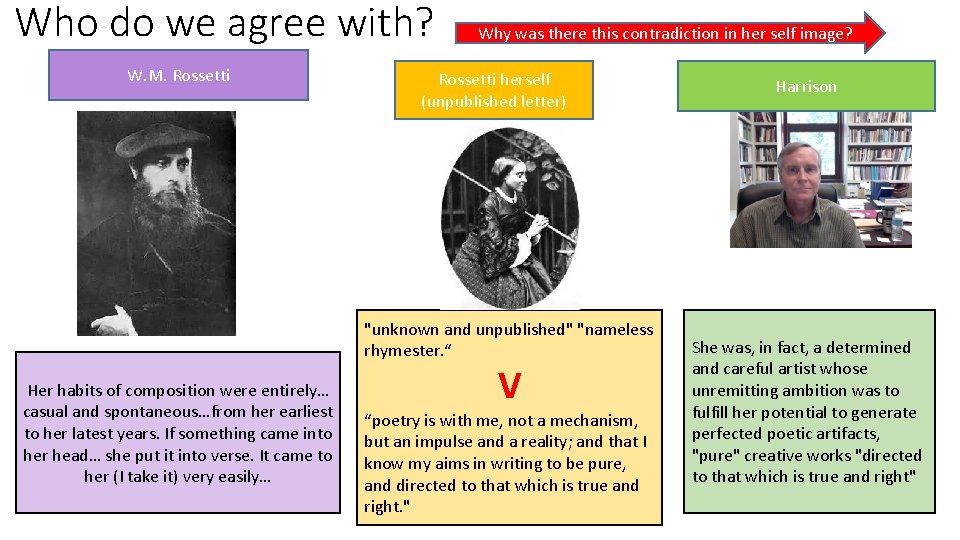 Christina Rossetti disingenuously describes herself as an "unknown and unpublished" writer, a "nameless rhymester. " Rossetti stresses her own true identity as a poet, explaining: "I hope that I shall not be misunderstood as guilty of egotism or foolish vanity, when I say that my love for what is good in the works of others teaches one that there is something above the despicable in mine; that poetry is with me, not a mechanism, but an impulse and a reality; and that I know my aims in writing to be pure, and directed to that which is true and right. " (Quoted by Sandars, Christina Rossetti, 85; original letter in the Yale University Library Special Collections).

Harrison Rossetti was, in fact, a determined and careful artist whose unremitting ambition was to fulfill her potential to generate perfected poetic artifacts, "pure" creative works "directed to that which is true and right" a conflict, not always easily resolved for Rossetti, between aesthetic and moral Rossetti's unrelenting belief in her own vocation as an artist. Yet critics still have not fully acknowledged her drive for aesthetic fulfillment, and, as a result, they have frequently been misguided in evaluating the precise aesthetic qualities, effects, and implications of her work.

W. M. Rossetti The most important piece of work to propagate the myth of Rossetti's "romantic" sincerity and her artistic innocence is William Michael Rossetti's "Memoir, " which appears in his collected edition of her Poetical Works [2/3], published ten years after Christina's death. There he promotes and extends a previously generated image of her poetic practice. He explains that “her habits of composition were entirely of the casual and spontaneous kind, from her earliest to her latest years. If something came into her head which she found suggestive of verse, she put it into verse. It came to her (I take it) very easily, without her meditating a possible subject, and without her making any great difference in the first from the latest form of the verses which embodied it. . What she wrote was pretty well known in the family as soon as her impeccably neat manuscript of it appeared. . . but she did not show it about as an achievement, and still less had she, in the course of her work, invited any hint, counsel, or co-operation. ”(Works, lxviii-1 aix)

Harrison - Rossetti's Avante-Garde Poetics In a surprising number of ways the poetry of Christina Rossetti, unlike the work of these writers, fits the avant-garde pattern that generally characterizes Pre-Raphaelite art and poetry and that the aesthetes, beginning with Pater and extending through Yeats, seized upon as providing an essential background to and basis for their own work. Like Walter Hamilton and John Dixon Hunt, Renato Pogglioli acknowledges without complication the evolution of Pre-Raphaelitism (as an avant-garde movement) into aestheticism, noting simply "the message handed down by the Pre-Raphaetite Brotherhood to the aesthetic movement at the fin de sièle" (Theory of the Avant-Garde, 226 -27). Rossetti's poetry does, even through its avant-garde strategy of withdrawal, obliquely provide a critique of the false values and false premises of topical work by her contemporaries. Moreover, the religious element of Rossetti's poetry, rather than conflicting with its avant-garde tendencies, uniquely contributes to them. Herbert Sussman quite correctly argues that "paradoxically it was the Ruskinian aim of reviving sacred art and restoring the high moral position of the artist that thrust the [Pre-Raphaelite] Brotherhood, within the cultural situation of mid-Victorian England, into modernist strategies and an avant-garde artistic role. " Sussman further maintains that "it is the continuation of these avant-garde methods and of an avant-garde position, rather than similarities of style and subject matter" that constitutes "the essential link" between the two generations of Pre-Raphaelites ("Pre-Raphaelite Brotherhood, " 7). It was, of course, Christina and Dante Gabriel — as poets of the first brotherhood and as exemplars of avant-garde aesthetic values and poetic procedures — who provided models for Morris, Swinburne, and the more peripheral second-generation poets. Perceptions of the link between the sacramental, Ruskinian aims of the first brotherhood and the ostensibly aestheticist predispositions of members of the second brotherhood are reinforced when we recall that, before their conversion to art by Rossetti, both William Morris and Edward Burne-Jones had intended to become priests. – Harrison Rossetti as Avant Garde

Who do we agree with? W. M. Rossetti Why was there this contradiction in her self image? Rossetti herself (unpublished letter) "unknown and unpublished" "nameless rhymester. “ Her habits of composition were entirely… casual and spontaneous…from her earliest to her latest years. If something came into her head… she put it into verse. It came to her (I take it) very easily… V “poetry is with me, not a mechanism, but an impulse and a reality; and that I know my aims in writing to be pure, and directed to that which is true and right. " Harrison She was, in fact, a determined and careful artist whose unremitting ambition was to fulfill her potential to generate perfected poetic artifacts, "pure" creative works "directed to that which is true and right" 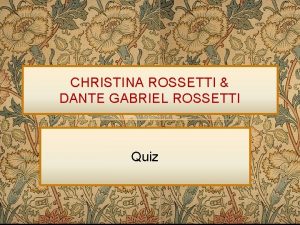 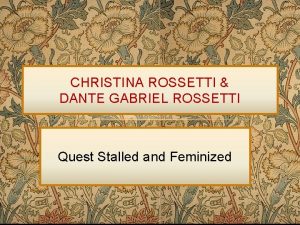 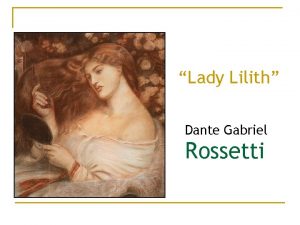 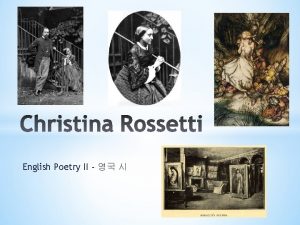 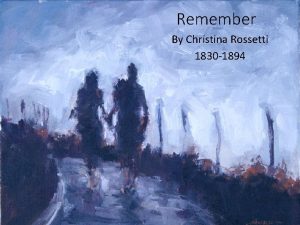 Remember By Christina Rossetti 1830 1894 Remember What