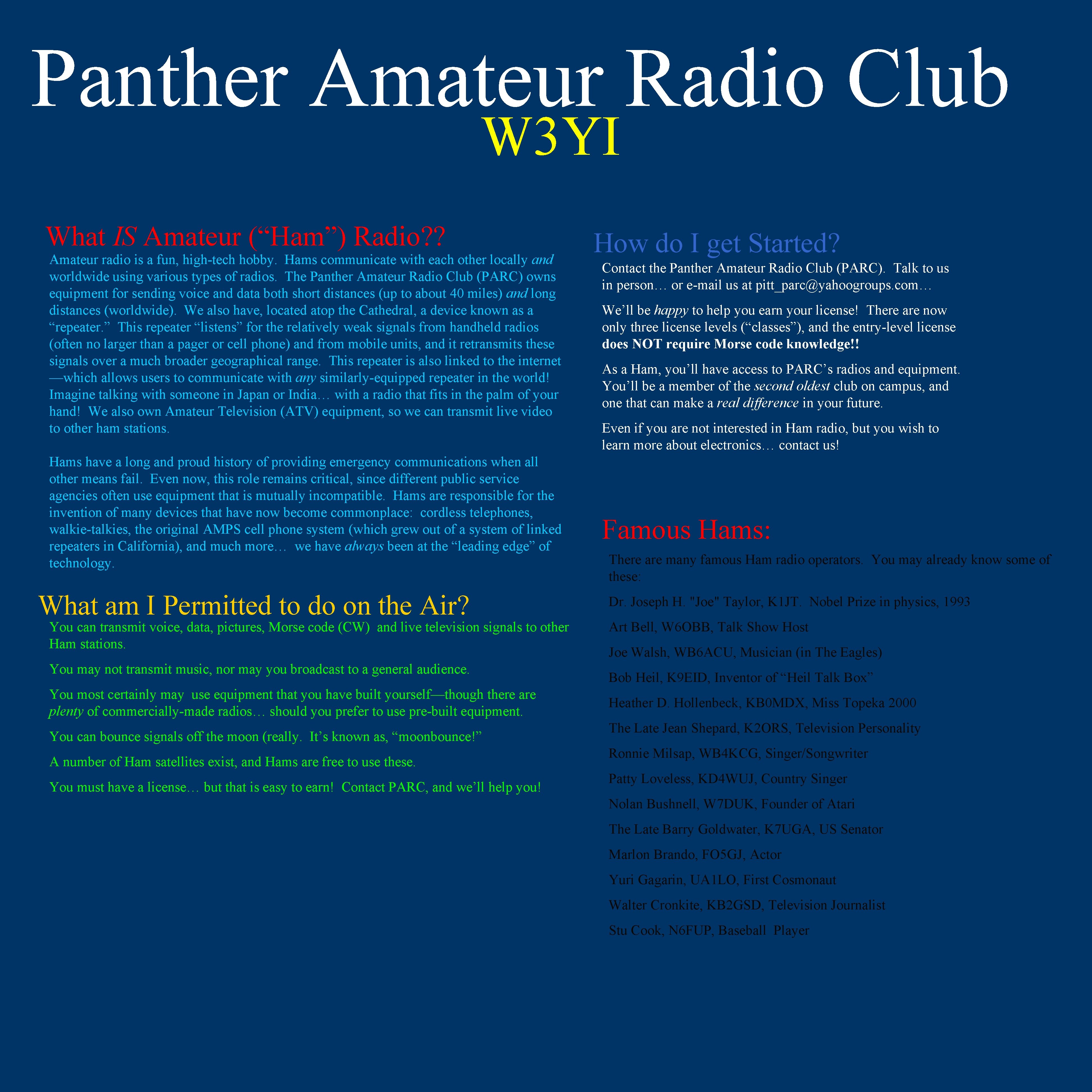 Panther Amateur Radio Club W 3 YI What IS Amateur (“Ham”) Radio? ? Amateur radio is a fun, high-tech hobby. Hams communicate with each other locally and worldwide using various types of radios. The Panther Amateur Radio Club (PARC) owns equipment for sending voice and data both short distances (up to about 40 miles) and long distances (worldwide). We also have, located atop the Cathedral, a device known as a “repeater. ” This repeater “listens” for the relatively weak signals from handheld radios (often no larger than a pager or cell phone) and from mobile units, and it retransmits these signals over a much broader geographical range. This repeater is also linked to the internet —which allows users to communicate with any similarly-equipped repeater in the world! Imagine talking with someone in Japan or India… with a radio that fits in the palm of your hand! We also own Amateur Television (ATV) equipment, so we can transmit live video to other ham stations. Hams have a long and proud history of providing emergency communications when all other means fail. Even now, this role remains critical, since different public service agencies often use equipment that is mutually incompatible. Hams are responsible for the invention of many devices that have now become commonplace: cordless telephones, walkie-talkies, the original AMPS cell phone system (which grew out of a system of linked repeaters in California), and much more… we have always been at the “leading edge” of technology. What am I Permitted to do on the Air? You can transmit voice, data, pictures, Morse code (CW) and live television signals to other Ham stations. You may not transmit music, nor may you broadcast to a general audience. You most certainly may use equipment that you have built yourself—though there are plenty of commercially-made radios… should you prefer to use pre-built equipment. You can bounce signals off the moon (really. It’s known as, “moonbounce!” A number of Ham satellites exist, and Hams are free to use these. You must have a license… but that is easy to earn! Contact PARC, and we’ll help you! How do I get Started? Contact the Panther Amateur Radio Club (PARC). Talk to us in person… or e-mail us at [email protected] com… We’ll be happy to help you earn your license! There are now only three license levels (“classes”), and the entry-level license does NOT require Morse code knowledge!! As a Ham, you’ll have access to PARC’s radios and equipment. You’ll be a member of the second oldest club on campus, and one that can make a real difference in your future. Even if you are not interested in Ham radio, but you wish to learn more about electronics… contact us! Famous Hams: There are many famous Ham radio operators. You may already know some of these: Dr. Joseph H. "Joe" Taylor, K 1 JT. Nobel Prize in physics, 1993 Art Bell, W 6 OBB, Talk Show Host Joe Walsh, WB 6 ACU, Musician (in The Eagles) Bob Heil, K 9 EID, Inventor of “Heil Talk Box” Heather D. Hollenbeck, KB 0 MDX, Miss Topeka 2000 The Late Jean Shepard, K 2 ORS, Television Personality Ronnie Milsap, WB 4 KCG, Singer/Songwriter Patty Loveless, KD 4 WUJ, Country Singer Nolan Bushnell, W 7 DUK, Founder of Atari The Late Barry Goldwater, K 7 UGA, US Senator Marlon Brando, FO 5 GJ, Actor Yuri Gagarin, UA 1 LO, First Cosmonaut Walter Cronkite, KB 2 GSD, Television Journalist Stu Cook, N 6 FUP, Baseball Player