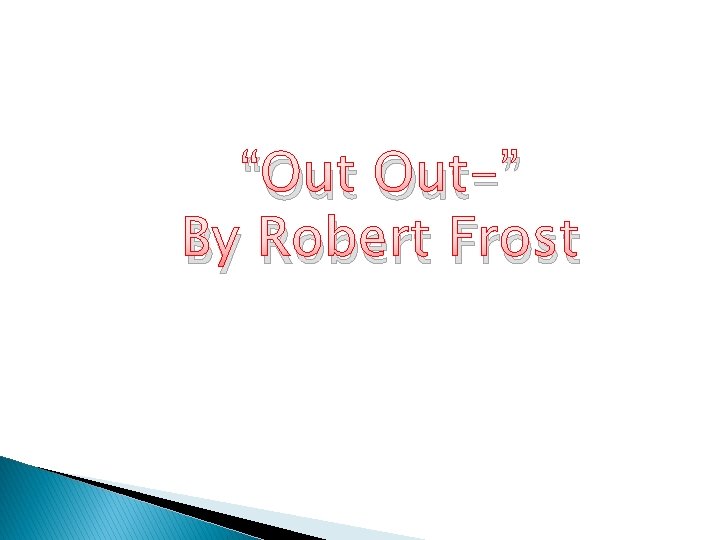 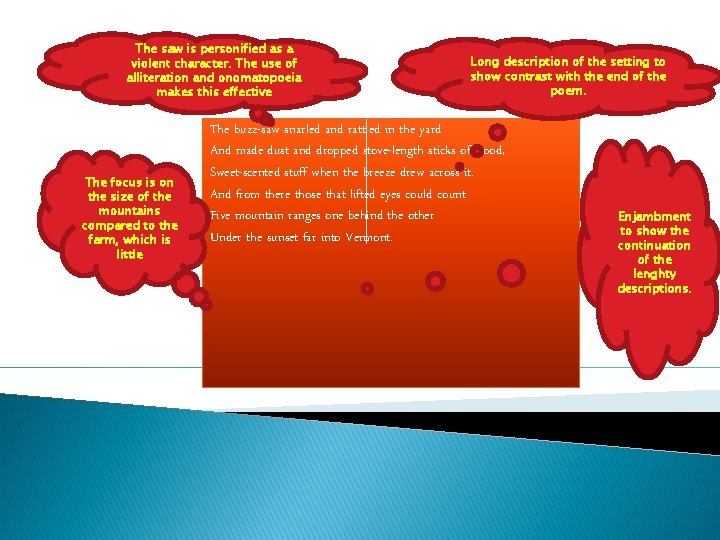 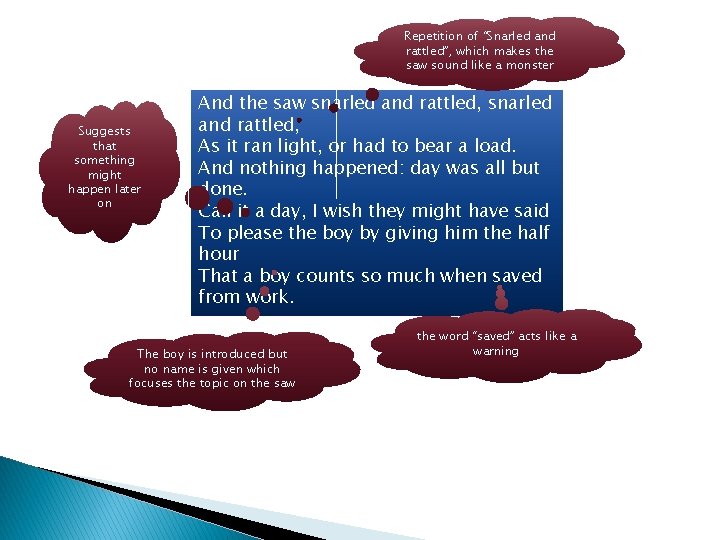 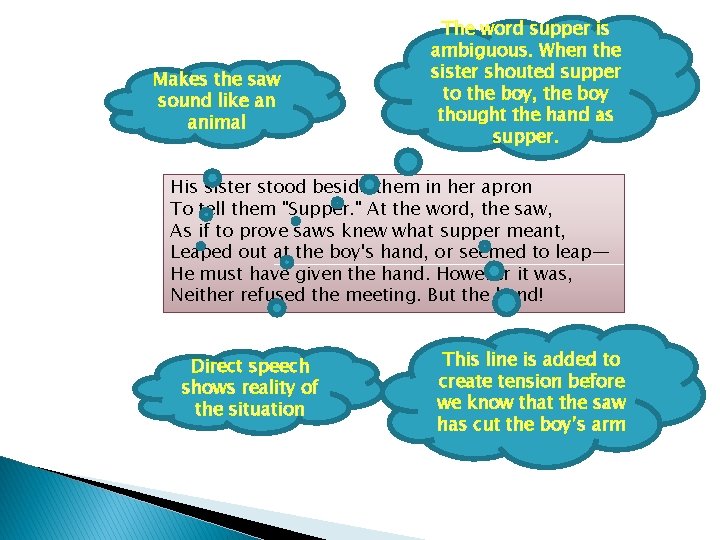 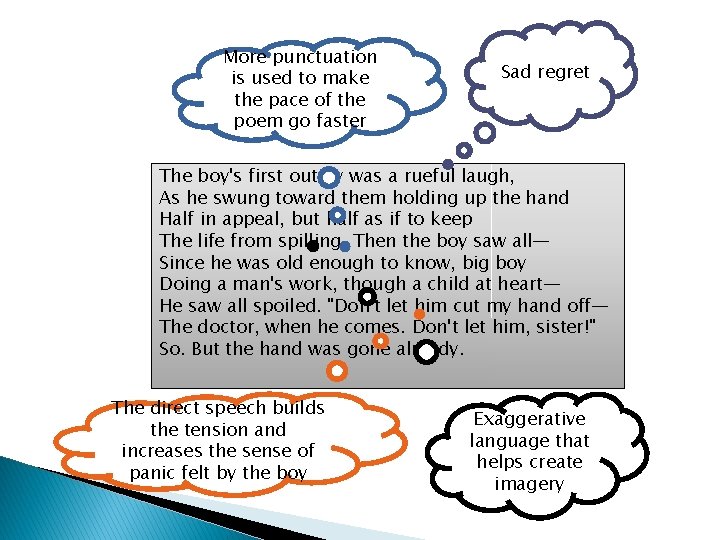 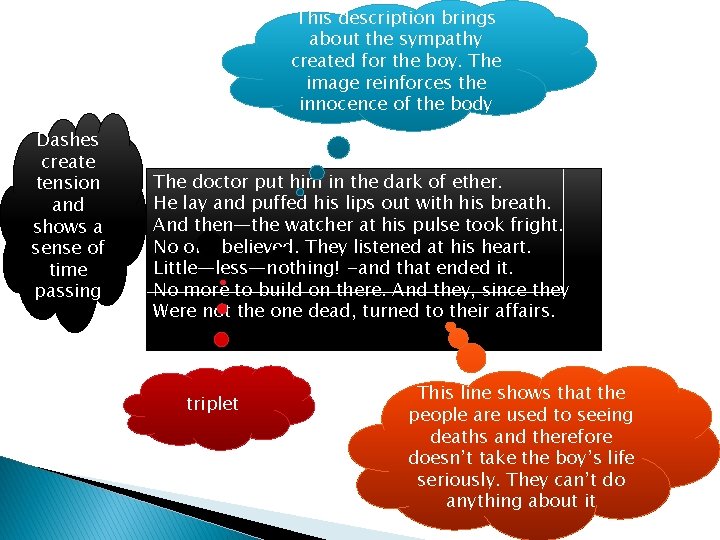 “Out Out-” By Robert Frost

The saw is personified as a violent character. The use of alliteration and onomatopoeia makes this effective The focus is on the size of the mountains compared to the farm, which is little Long description of the setting to show contrast with the end of the poem. The buzz-saw snarled and rattled in the yard And made dust and dropped stove-length sticks of wood, Sweet-scented stuff when the breeze drew across it. And from there those that lifted eyes could count Five mountain ranges one behind the other Under the sunset far into Vermont. Enjambment to show the continuation of the lenghty descriptions.

Repetition of “Snarled and rattled”, which makes the saw sound like a monster Suggests that something might happen later on And the saw snarled and rattled, As it ran light, or had to bear a load. And nothing happened: day was all but done. Call it a day, I wish they might have said To please the boy by giving him the half hour That a boy counts so much when saved from work. The boy is introduced but no name is given which focuses the topic on the saw the word “saved” acts like a warning

Makes the saw sound like an animal The word supper is ambiguous. When the sister shouted supper to the boy, the boy thought the hand as supper. His sister stood beside them in her apron To tell them "Supper. " At the word, the saw, As if to prove saws knew what supper meant, Leaped out at the boy's hand, or seemed to leap— He must have given the hand. However it was, Neither refused the meeting. But the hand! Direct speech shows reality of the situation This line is added to create tension before we know that the saw has cut the boy’s arm

More punctuation is used to make the pace of the poem go faster Sad regret The boy's first outcry was a rueful laugh, As he swung toward them holding up the hand Half in appeal, but half as if to keep The life from spilling. Then the boy saw all— Since he was old enough to know, big boy Doing a man's work, though a child at heart— He saw all spoiled. "Don't let him cut my hand off— The doctor, when he comes. Don't let him, sister!" So. But the hand was gone already. The direct speech builds the tension and increases the sense of panic felt by the boy Exaggerative language that helps create imagery

This description brings about the sympathy created for the boy. The image reinforces the innocence of the body Dashes create tension and shows a sense of time passing The doctor put him in the dark of ether. He lay and puffed his lips out with his breath. And then—the watcher at his pulse took fright. No one believed. They listened at his heart. Little—less—nothing!—and that ended it. No more to build on there. And they, since they Were not the one dead, turned to their affairs. triplet This line shows that the people are used to seeing deaths and therefore doesn’t take the boy’s life seriously. They can’t do anything about it 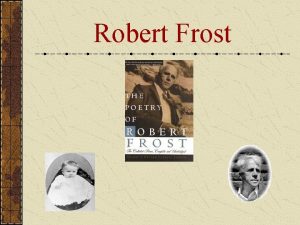 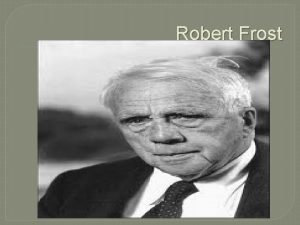 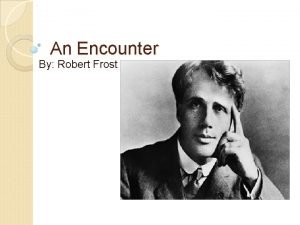 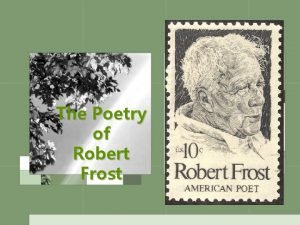 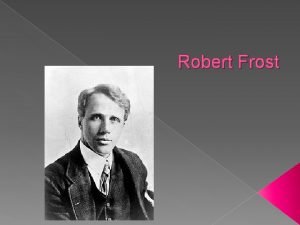