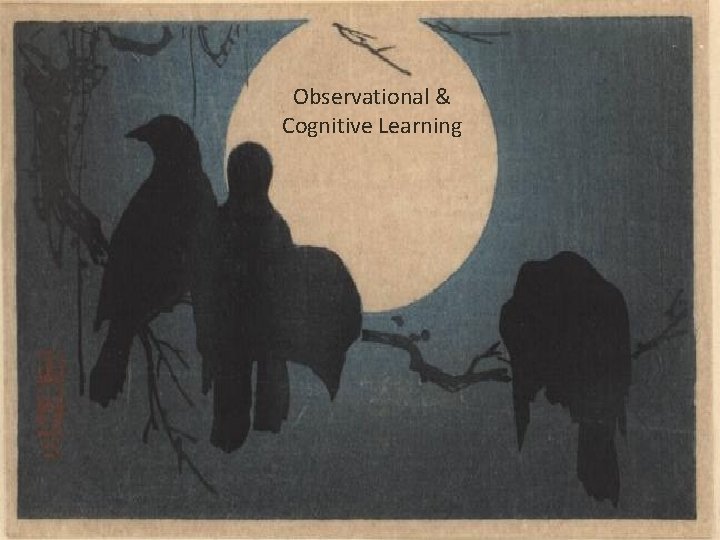 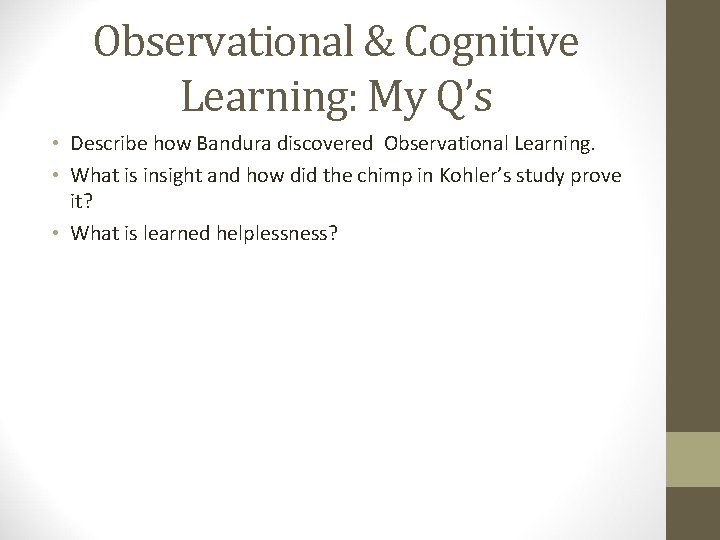 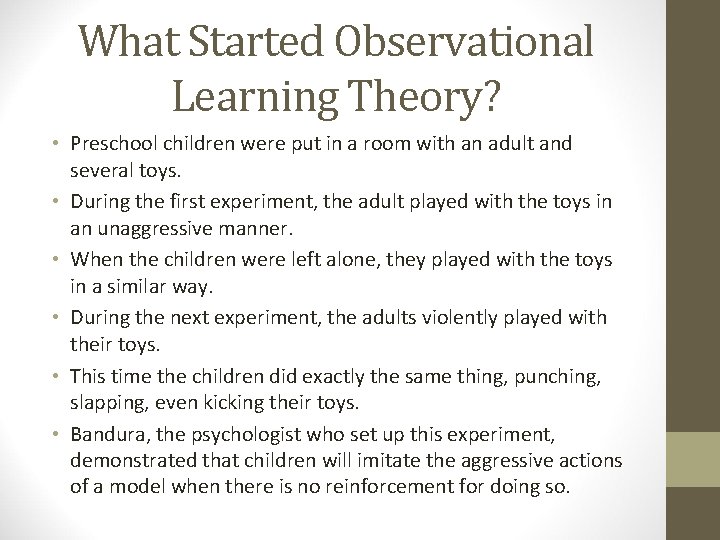 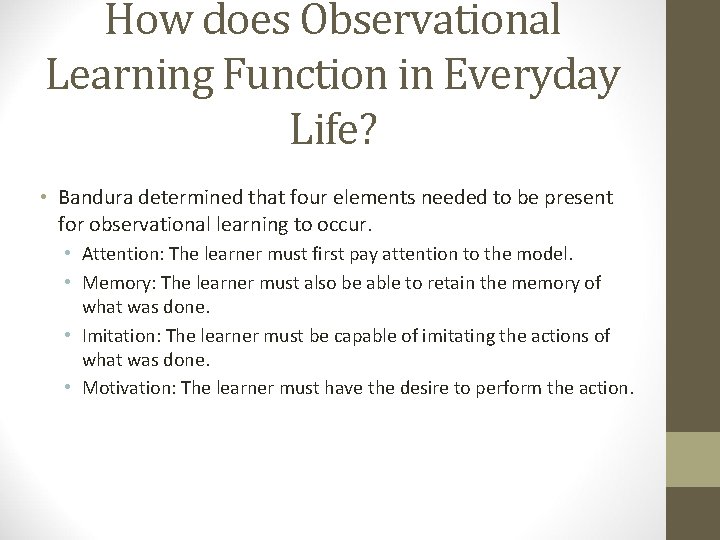 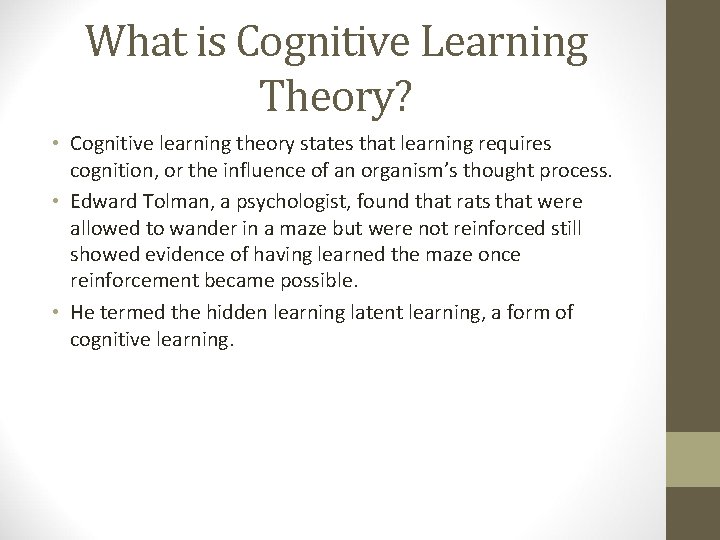 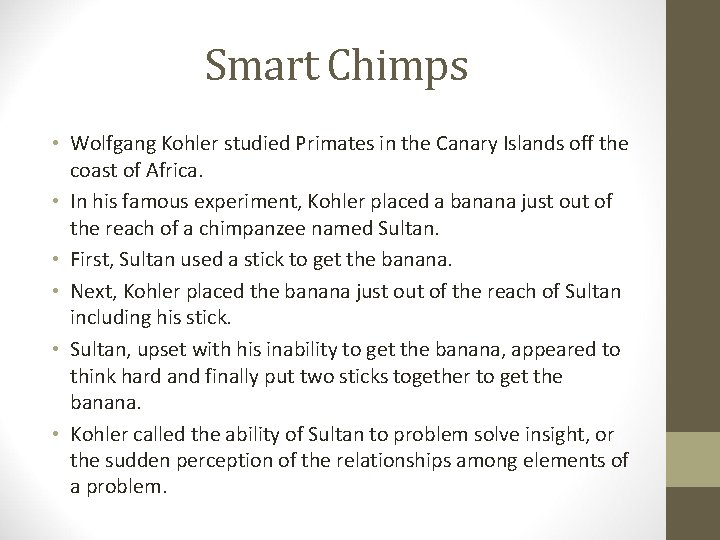 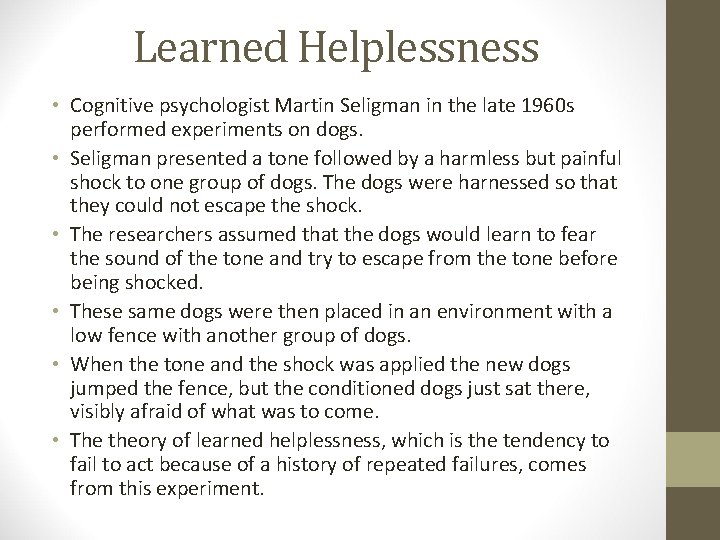 Observational & Cognitive Learning: My Q’s • Describe how Bandura discovered Observational Learning. • What is insight and how did the chimp in Kohler’s study prove it? • What is learned helplessness?

What Started Observational Learning Theory? • Preschool children were put in a room with an adult and several toys. • During the first experiment, the adult played with the toys in an unaggressive manner. • When the children were left alone, they played with the toys in a similar way. • During the next experiment, the adults violently played with their toys. • This time the children did exactly the same thing, punching, slapping, even kicking their toys. • Bandura, the psychologist who set up this experiment, demonstrated that children will imitate the aggressive actions of a model when there is no reinforcement for doing so.

What is Cognitive Learning Theory? • Cognitive learning theory states that learning requires cognition, or the influence of an organism’s thought process. • Edward Tolman, a psychologist, found that rats that were allowed to wander in a maze but were not reinforced still showed evidence of having learned the maze once reinforcement became possible. • He termed the hidden learning latent learning, a form of cognitive learning.

Smart Chimps • Wolfgang Kohler studied Primates in the Canary Islands off the coast of Africa. • In his famous experiment, Kohler placed a banana just out of the reach of a chimpanzee named Sultan. • First, Sultan used a stick to get the banana. • Next, Kohler placed the banana just out of the reach of Sultan including his stick. • Sultan, upset with his inability to get the banana, appeared to think hard and finally put two sticks together to get the banana. • Kohler called the ability of Sultan to problem solve insight, or the sudden perception of the relationships among elements of a problem.

Learned Helplessness • Cognitive psychologist Martin Seligman in the late 1960 s performed experiments on dogs. • Seligman presented a tone followed by a harmless but painful shock to one group of dogs. The dogs were harnessed so that they could not escape the shock. • The researchers assumed that the dogs would learn to fear the sound of the tone and try to escape from the tone before being shocked. • These same dogs were then placed in an environment with a low fence with another group of dogs. • When the tone and the shock was applied the new dogs jumped the fence, but the conditioned dogs just sat there, visibly afraid of what was to come. • The theory of learned helplessness, which is the tendency to fail to act because of a history of repeated failures, comes from this experiment. 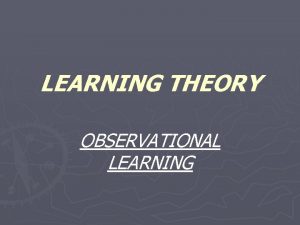 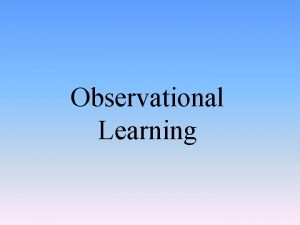 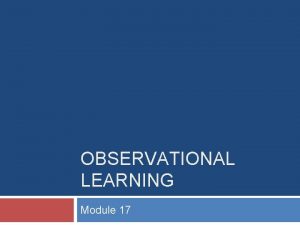 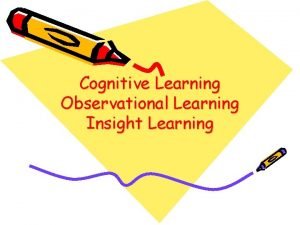 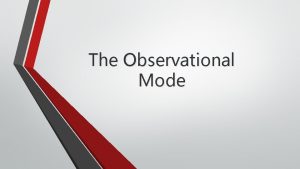 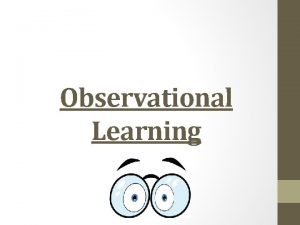