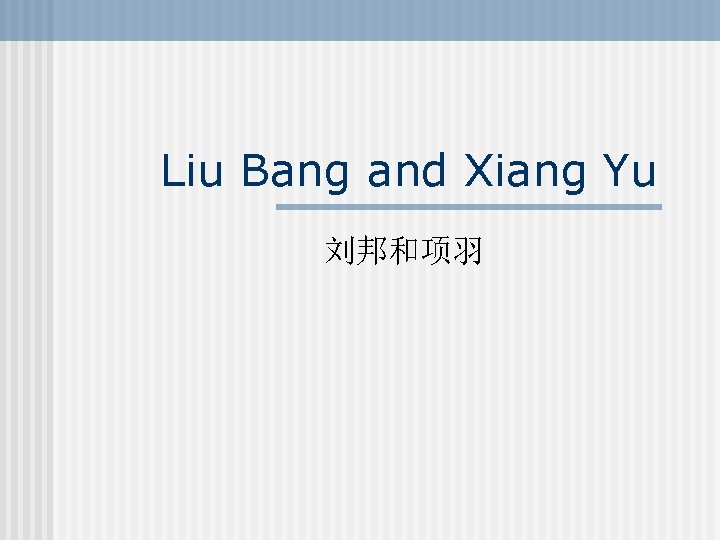 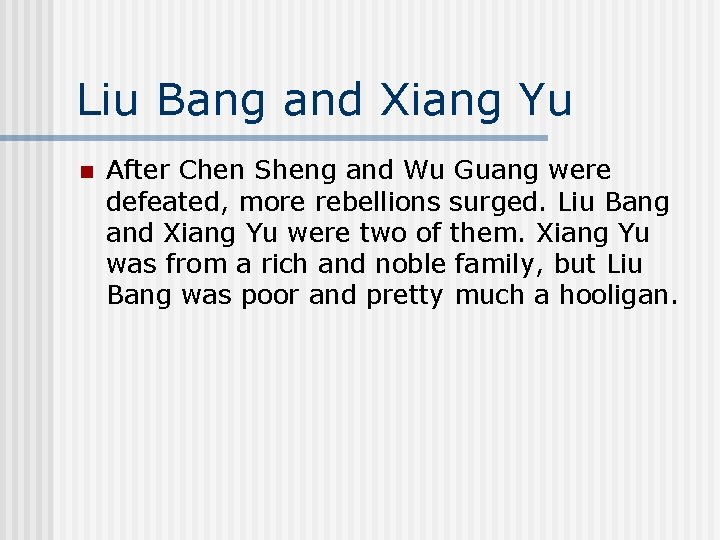 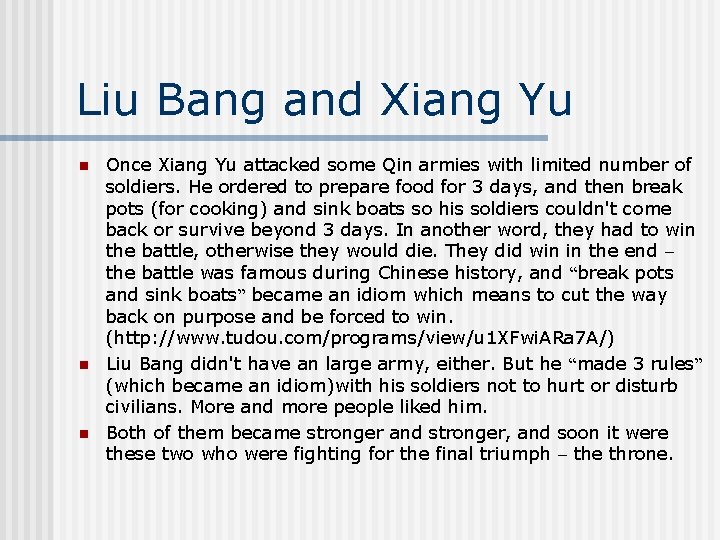 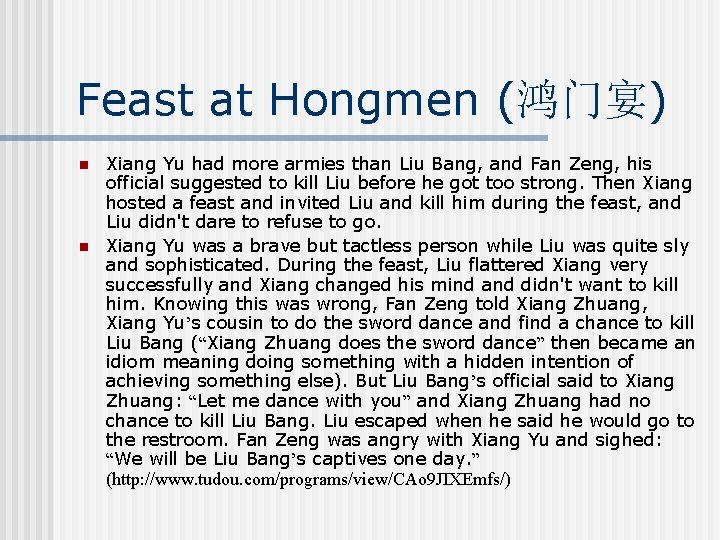 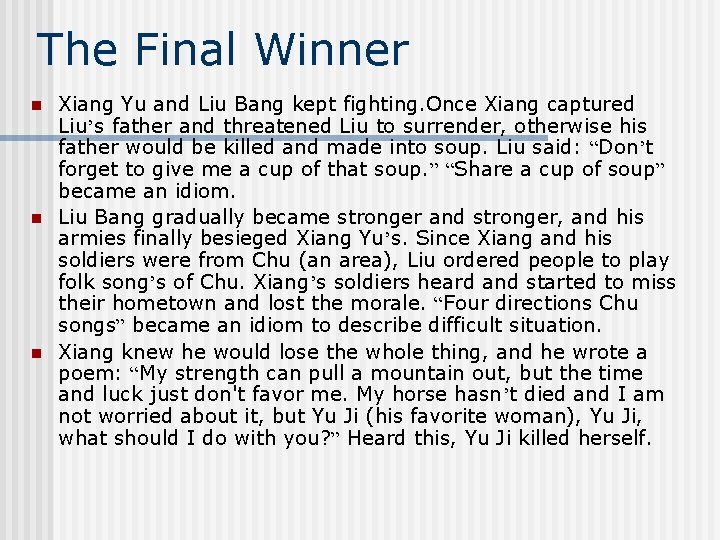 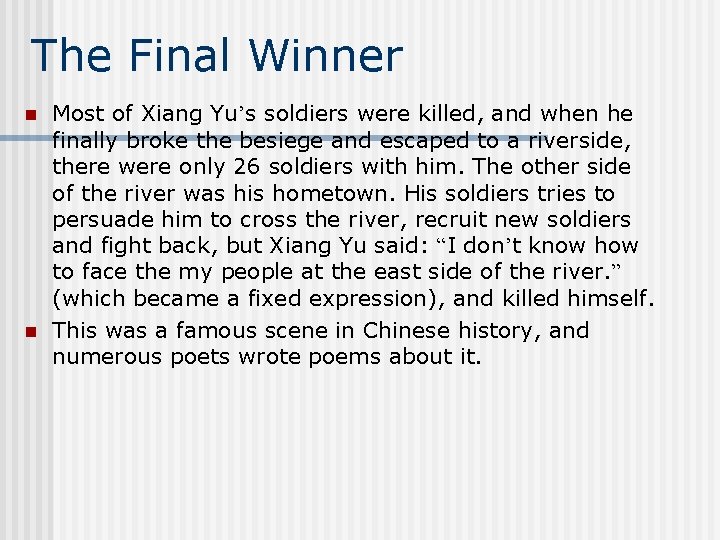 Liu Bang and Xiang Yu n n n Once Xiang Yu attacked some Qin armies with limited number of soldiers. He ordered to prepare food for 3 days, and then break pots (for cooking) and sink boats so his soldiers couldn't come back or survive beyond 3 days. In another word, they had to win the battle, otherwise they would die. They did win in the end – the battle was famous during Chinese history, and “break pots and sink boats” became an idiom which means to cut the way back on purpose and be forced to win. (http: //www. tudou. com/programs/view/u 1 XFwi. ARa 7 A/) Liu Bang didn't have an large army, either. But he “made 3 rules” (which became an idiom)with his soldiers not to hurt or disturb civilians. More and more people liked him. Both of them became stronger and stronger, and soon it were these two who were fighting for the final triumph – the throne.

Feast at Hongmen (鸿门宴) n n Xiang Yu had more armies than Liu Bang, and Fan Zeng, his official suggested to kill Liu before he got too strong. Then Xiang hosted a feast and invited Liu and kill him during the feast, and Liu didn't dare to refuse to go. Xiang Yu was a brave but tactless person while Liu was quite sly and sophisticated. During the feast, Liu flattered Xiang very successfully and Xiang changed his mind and didn't want to kill him. Knowing this was wrong, Fan Zeng told Xiang Zhuang, Xiang Yu’s cousin to do the sword dance and find a chance to kill Liu Bang (“Xiang Zhuang does the sword dance” then became an idiom meaning doing something with a hidden intention of achieving something else). But Liu Bang’s official said to Xiang Zhuang: “Let me dance with you” and Xiang Zhuang had no chance to kill Liu Bang. Liu escaped when he said he would go to the restroom. Fan Zeng was angry with Xiang Yu and sighed: “We will be Liu Bang’s captives one day. ” (http: //www. tudou. com/programs/view/CAo 9 JIXEmfs/)

The Final Winner n n n Xiang Yu and Liu Bang kept fighting. Once Xiang captured Liu’s father and threatened Liu to surrender, otherwise his father would be killed and made into soup. Liu said: “Don’t forget to give me a cup of that soup. ” “Share a cup of soup” became an idiom. Liu Bang gradually became stronger and stronger, and his armies finally besieged Xiang Yu’s. Since Xiang and his soldiers were from Chu (an area), Liu ordered people to play folk song’s of Chu. Xiang’s soldiers heard and started to miss their hometown and lost the morale. “Four directions Chu songs” became an idiom to describe difficult situation. Xiang knew he would lose the whole thing, and he wrote a poem: “My strength can pull a mountain out, but the time and luck just don't favor me. My horse hasn’t died and I am not worried about it, but Yu Ji (his favorite woman), Yu Ji, what should I do with you? ” Heard this, Yu Ji killed herself.

The Final Winner n n Most of Xiang Yu’s soldiers were killed, and when he finally broke the besiege and escaped to a riverside, there were only 26 soldiers with him. The other side of the river was his hometown. His soldiers tries to persuade him to cross the river, recruit new soldiers and fight back, but Xiang Yu said: “I don’t know how to face the my people at the east side of the river. ” (which became a fixed expression), and killed himself. This was a famous scene in Chinese history, and numerous poets wrote poems about it. 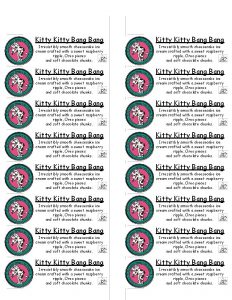 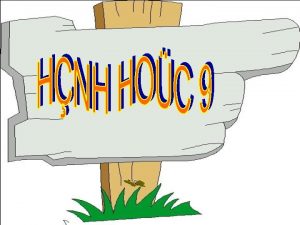 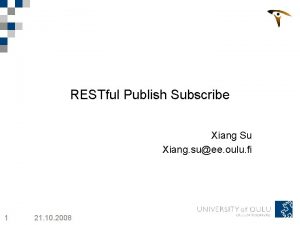 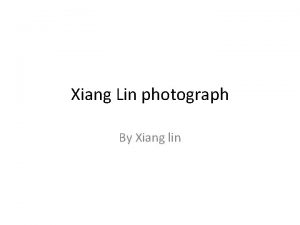 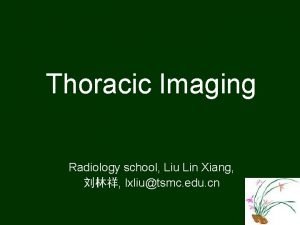