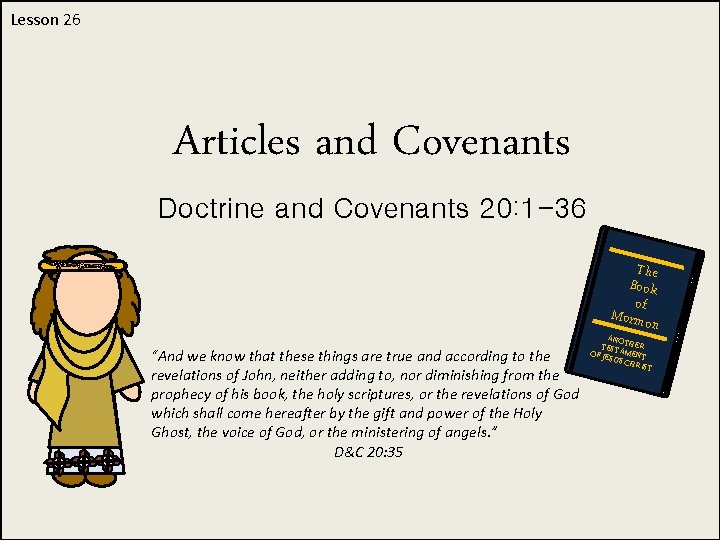 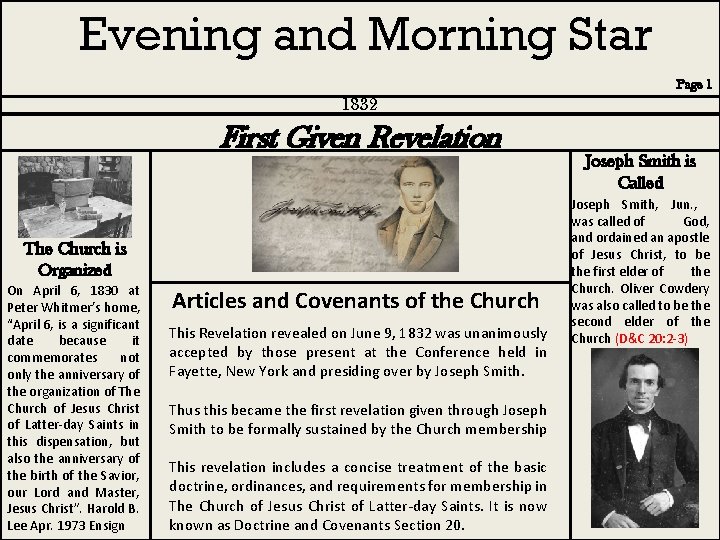 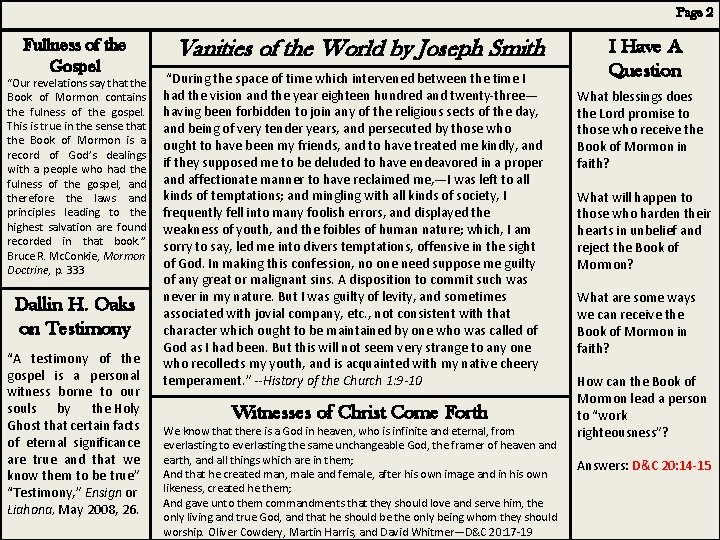 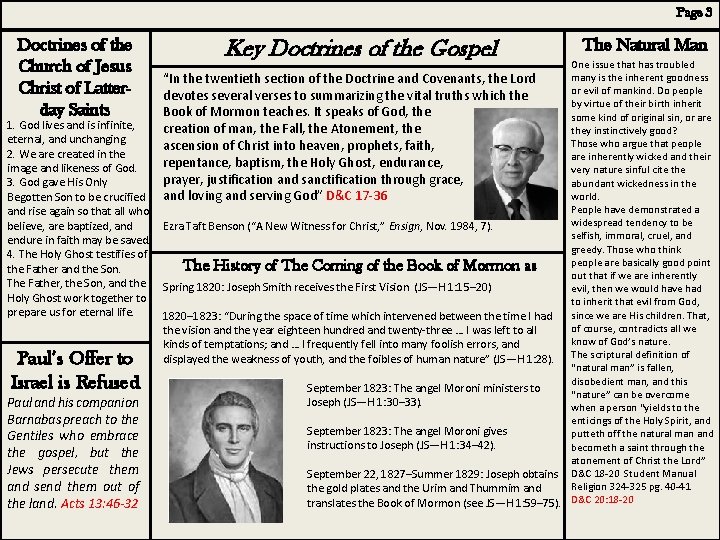 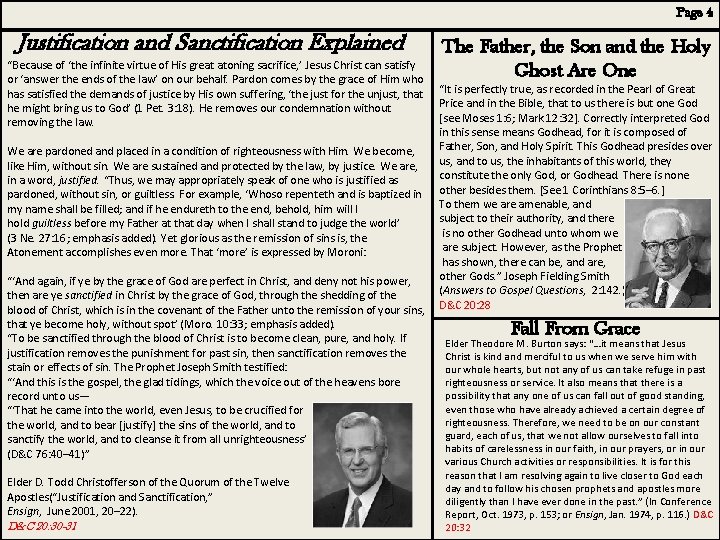 Lesson 26 Articles and Covenants Doctrine and Covenants 20: 1 -36 The Book of Morm on “And we know that these things are true and according to the revelations of John, neither adding to, nor diminishing from the prophecy of his book, the holy scriptures, or the revelations of God which shall come hereafter by the gift and power of the Holy Ghost, the voice of God, or the ministering of angels. ” D&C 20: 35 ANO THER TES OF JE TAMENT SUS C HRIS T

Evening and Morning Star Page 1 1832 First Given Revelation The Church is Organized On April 6, 1830 at Peter Whitmer’s home, “April 6, is a significant date because it commemorates not only the anniversary of the organization of The Church of Jesus Christ of Latter-day Saints in this dispensation, but also the anniversary of the birth of the Savior, our Lord and Master, Jesus Christ”. Harold B. Lee Apr. 1973 Ensign Articles and Covenants of the Church This Revelation revealed on June 9, 1832 was unanimously accepted by those present at the Conference held in Fayette, New York and presiding over by Joseph Smith. Thus this became the first revelation given through Joseph Smith to be formally sustained by the Church membership This revelation includes a concise treatment of the basic doctrine, ordinances, and requirements for membership in The Church of Jesus Christ of Latter-day Saints. It is now known as Doctrine and Covenants Section 20. Joseph Smith is Called Joseph Smith, Jun. , was called of God, and ordained an apostle of Jesus Christ, to be the first elder of the Church. Oliver Cowdery was also called to be the second elder of the Church (D&C 20: 2 -3)

Page 2 Fullness of the Gospel “Our revelations say that the Book of Mormon contains the fulness of the gospel. This is true in the sense that the Book of Mormon is a record of God’s dealings with a people who had the fulness of the gospel, and therefore the laws and principles leading to the highest salvation are found recorded in that book. ” Bruce R. Mc. Conkie, Mormon Doctrine, p. 333 Dallin H. Oaks on Testimony “A testimony of the gospel is a personal witness borne to our souls by the Holy Ghost that certain facts of eternal significance are true and that we know them to be true” “Testimony, ” Ensign or Liahona, May 2008, 26. Vanities of the World by Joseph Smith “During the space of time which intervened between the time I had the vision and the year eighteen hundred and twenty-three— having been forbidden to join any of the religious sects of the day, and being of very tender years, and persecuted by those who ought to have been my friends, and to have treated me kindly, and if they supposed me to be deluded to have endeavored in a proper and affectionate manner to have reclaimed me, —I was left to all kinds of temptations; and mingling with all kinds of society, I frequently fell into many foolish errors, and displayed the weakness of youth, and the foibles of human nature; which, I am sorry to say, led me into divers temptations, offensive in the sight of God. In making this confession, no one need suppose me guilty of any great or malignant sins. A disposition to commit such was never in my nature. But I was guilty of levity, and sometimes associated with jovial company, etc. , not consistent with that character which ought to be maintained by one who was called of God as I had been. But this will not seem very strange to any one who recollects my youth, and is acquainted with my native cheery temperament. ” --History of the Church 1: 9 -10 Witnesses of Christ Come Forth We know that there is a God in heaven, who is infinite and eternal, from everlasting to everlasting the same unchangeable God, the framer of heaven and earth, and all things which are in them; And that he created man, male and female, after his own image and in his own likeness, created he them; And gave unto them commandments that they should love and serve him, the only living and true God, and that he should be the only being whom they should worship. Oliver Cowdery, Martin Harris, and David Whitmer—D&C 20: 17 -19 I Have A Question What blessings does the Lord promise to those who receive the Book of Mormon in faith? What will happen to those who harden their hearts in unbelief and reject the Book of Mormon? What are some ways we can receive the Book of Mormon in faith? How can the Book of Mormon lead a person to “work righteousness”? Answers: D&C 20: 14 -15

Page 3 Doctrines of the Church of Jesus Christ of Latterday Saints 1. God lives and is infinite, eternal, and unchanging. 2. We are created in the image and likeness of God. 3. God gave His Only Begotten Son to be crucified and rise again so that all who believe, are baptized, and endure in faith may be saved. 4. The Holy Ghost testifies of the Father and the Son. The Father, the Son, and the Holy Ghost work together to prepare us for eternal life. Paul’s Offer to Israel is Refused Paul and his companion Barnabas preach to the Gentiles who embrace the gospel, but the Jews persecute them and send them out of the land. Acts 13: 46 -32 Key Doctrines of the Gospel The Natural Man One issue that has troubled many is the inherent goodness “In the twentieth section of the Doctrine and Covenants, the Lord or evil of mankind. Do people devotes several verses to summarizing the vital truths which the by virtue of their birth inherit Book of Mormon teaches. It speaks of God, the some kind of original sin, or are creation of man, the Fall, the Atonement, they instinctively good? Those who argue that people ascension of Christ into heaven, prophets, faith, are inherently wicked and their repentance, baptism, the Holy Ghost, endurance, very nature sinful cite the prayer, justification and sanctification through grace, abundant wickedness in the world. and loving and serving God” D&C 17 -36 People have demonstrated a widespread tendency to be Ezra Taft Benson (“A New Witness for Christ, ” Ensign, Nov. 1984, 7). selfish, immoral, cruel, and greedy. Those who think people are basically good point The History of The Coming of the Book of Mormon as out that if we are inherently Spring 1820: Joseph Smith receives the First Vision (JS—H 1: 15– 20) evil, then we would have had to inherit that evil from God, 1820– 1823: “During the space of time which intervened between the time I had since we are His children. That, of course, contradicts all we the vision and the year eighteen hundred and twenty-three … I was left to all know of God’s nature. kinds of temptations; and … I frequently fell into many foolish errors, and displayed the weakness of youth, and the foibles of human nature” (JS—H 1: 28). The scriptural definition of “natural man” is fallen, disobedient man, and this September 1823: The angel Moroni ministers to “nature” can be overcome Joseph (JS—H 1: 30– 33). when a person “yields to the enticings of the Holy Spirit, and September 1823: The angel Moroni gives putteth off the natural man and instructions to Joseph (JS—H 1: 34– 42). becometh a saint through the atonement of Christ the Lord” September 22, 1827–Summer 1829: Joseph obtains D&C 18 -20 Student Manual Religion 324 -325 pg. 40 -41 the gold plates and the Urim and Thummim and translates the Book of Mormon (see JS—H 1: 59– 75). D&C 20: 18 -20

Page 4 Justification and Sanctification Explained “Because of ‘the infinite virtue of His great atoning sacrifice, ’ Jesus Christ can satisfy or ‘answer the ends of the law’ on our behalf. Pardon comes by the grace of Him who has satisfied the demands of justice by His own suffering, ‘the just for the unjust, that he might bring us to God’ (1 Pet. 3: 18). He removes our condemnation without removing the law. The Father, the Son and the Holy Ghost Are One “It is perfectly true, as recorded in the Pearl of Great Price and in the Bible, that to us there is but one God [see Moses 1: 6; Mark 12: 32]. Correctly interpreted God in this sense means Godhead, for it is composed of Father, Son, and Holy Spirit. This Godhead presides over We are pardoned and placed in a condition of righteousness with Him. We become, us, and to us, the inhabitants of this world, they like Him, without sin. We are sustained and protected by the law, by justice. We are, constitute the only God, or Godhead. There is none in a word, justified. “Thus, we may appropriately speak of one who is justified as pardoned, without sin, or guiltless. For example, ‘Whoso repenteth and is baptized in other besides them. [See 1 Corinthians 8: 5– 6. ] To them we are amenable, and my name shall be filled; and if he endureth to the end, behold, him will I subject to their authority, and there hold guiltless before my Father at that day when I shall stand to judge the world’ is no other Godhead unto whom we (3 Ne. 27: 16; emphasis added). Yet glorious as the remission of sins is, the are subject. However, as the Prophet Atonement accomplishes even more. That ‘more’ is expressed by Moroni: has shown, there can be, and are, other Gods. ” Joseph Fielding Smith “‘And again, if ye by the grace of God are perfect in Christ, and deny not his power, (Answers to Gospel Questions, 2: 142. ) then are ye sanctified in Christ by the grace of God, through the shedding of the blood of Christ, which is in the covenant of the Father unto the remission of your sins, D&C 20: 28 that ye become holy, without spot’ (Moro. 10: 33; emphasis added). “To be sanctified through the blood of Christ is to become clean, pure, and holy. If Elder Theodore M. Burton says: “…it means that Jesus justification removes the punishment for past sin, then sanctification removes the Christ is kind and merciful to us when we serve him with stain or effects of sin. The Prophet Joseph Smith testified: our whole hearts, but not any of us can take refuge in past “‘And this is the gospel, the glad tidings, which the voice out of the heavens bore righteousness or service. It also means that there is a possibility that any one of us can fall out of good standing, record unto us— even those who have already achieved a certain degree of “‘That he came into the world, even Jesus, to be crucified for righteousness. Therefore, we need to be on our constant the world, and to bear [justify] the sins of the world, and to guard, each of us, that we not allow ourselves to fall into sanctify the world, and to cleanse it from all unrighteousness’ habits of carelessness in our faith, in our prayers, or in our (D&C 76: 40– 41)” Fall From Grace Elder D. Todd Christofferson of the Quorum of the Twelve Apostles(“Justification and Sanctification, ” Ensign, June 2001, 20– 22). D&C 20: 30 -31 various Church activities or responsibilities. It is for this reason that I am resolving again to live closer to God each day and to follow his chosen prophets and apostles more diligently than I have ever done in the past. ” (In Conference Report, Oct. 1973, p. 153; or Ensign, Jan. 1974, p. 116. ) D&C 20: 32 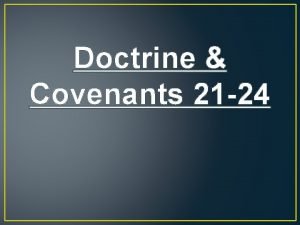 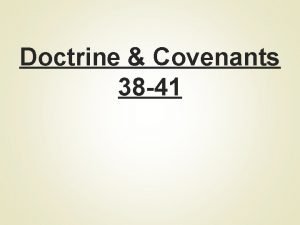 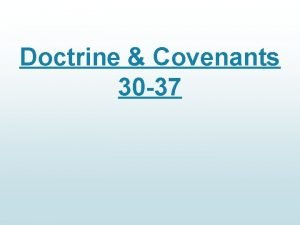 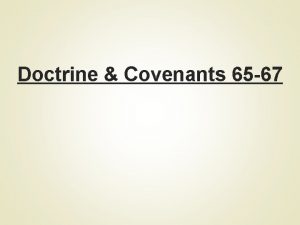