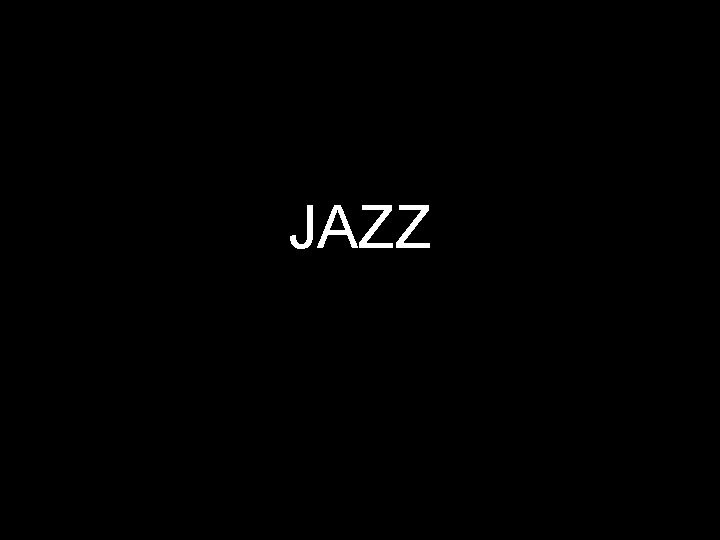 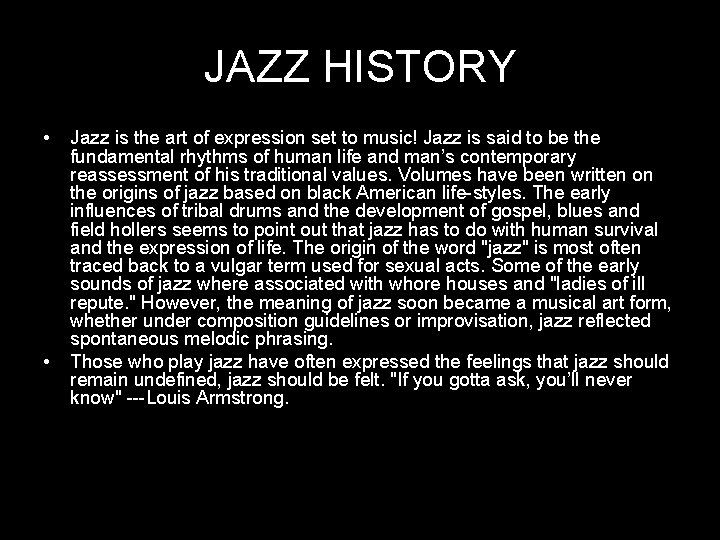 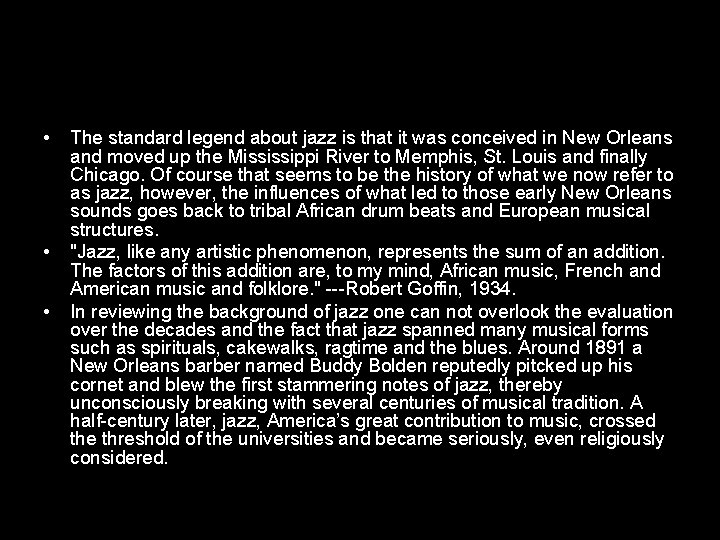 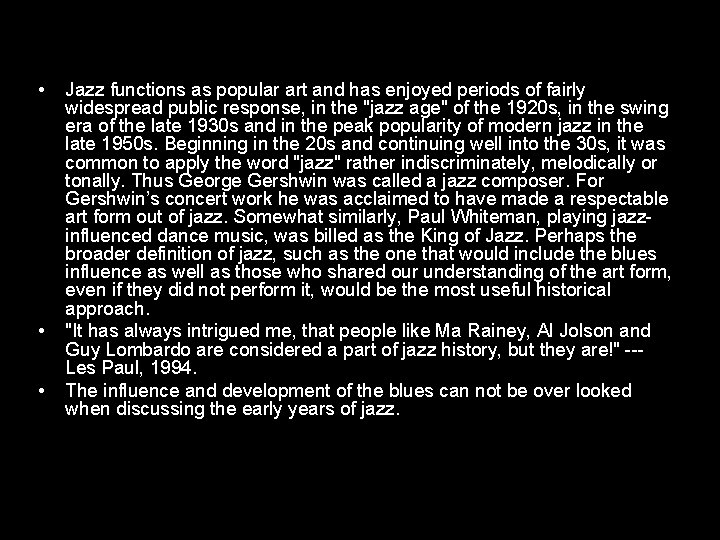 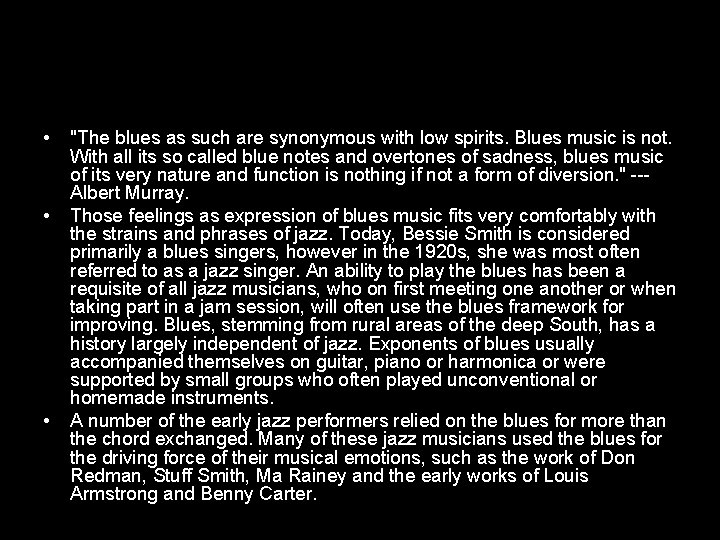 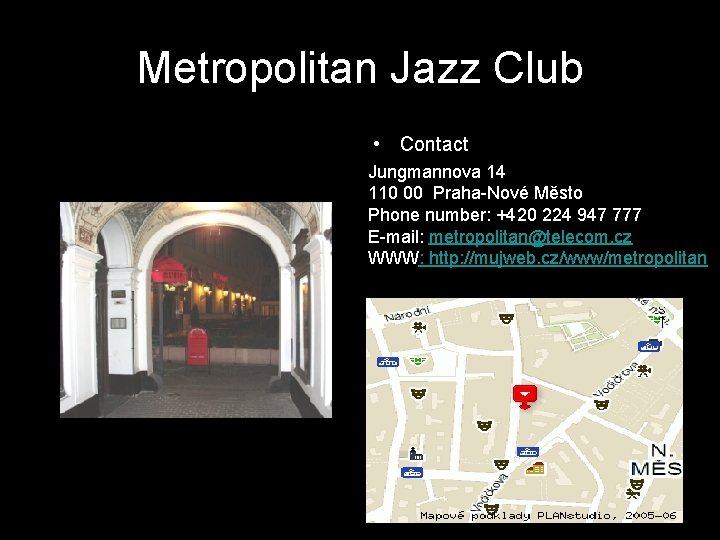 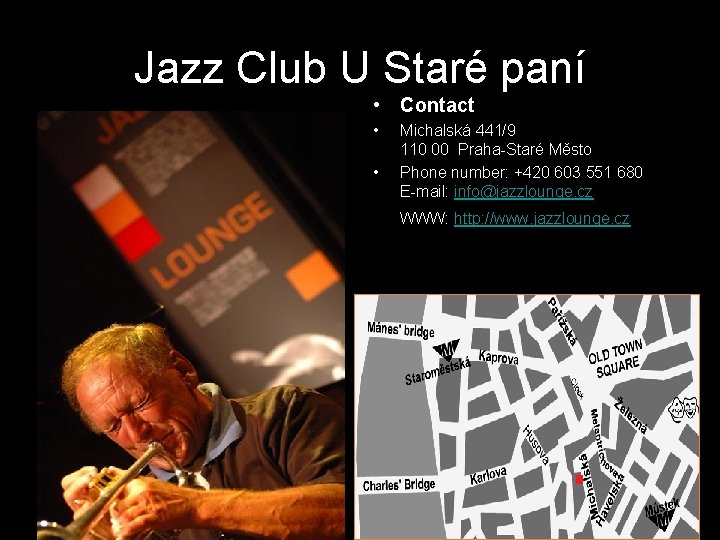 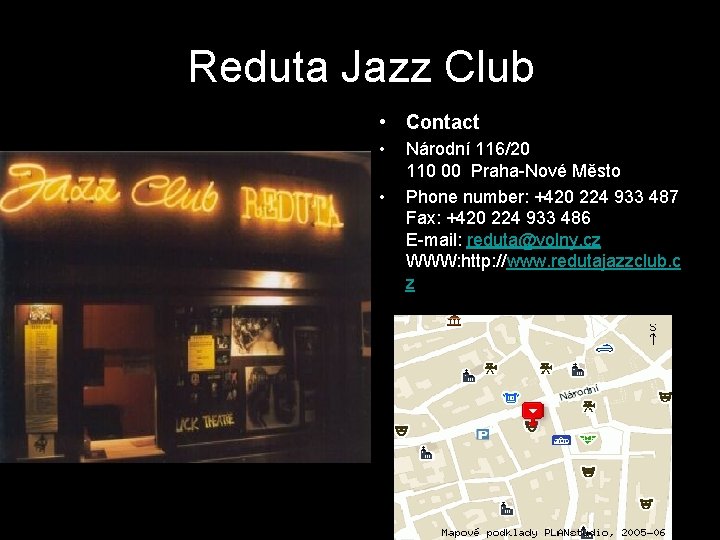 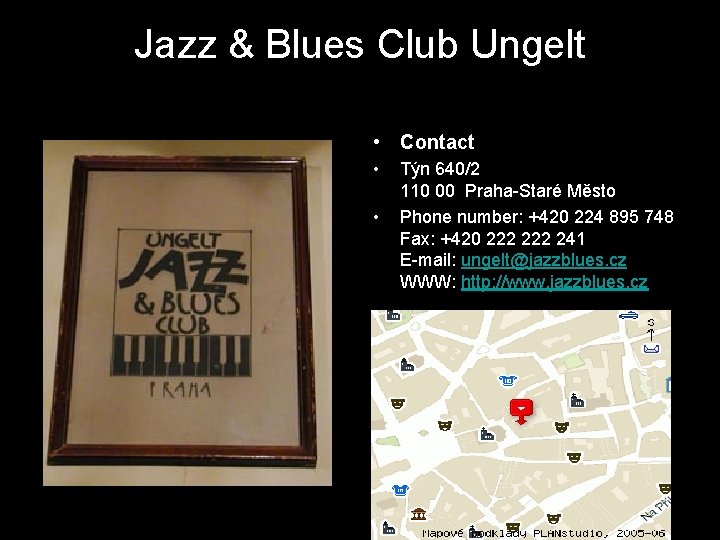 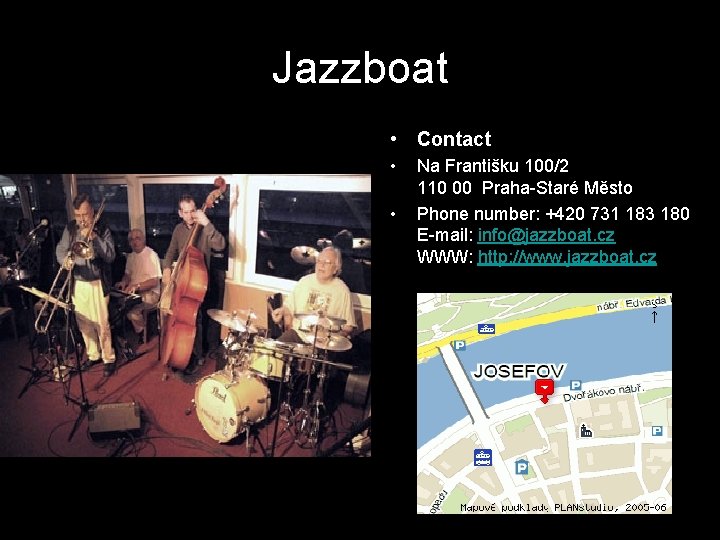 JAZZ HISTORY • • Jazz is the art of expression set to music! Jazz is said to be the fundamental rhythms of human life and man’s contemporary reassessment of his traditional values. Volumes have been written on the origins of jazz based on black American life-styles. The early influences of tribal drums and the development of gospel, blues and field hollers seems to point out that jazz has to do with human survival and the expression of life. The origin of the word "jazz" is most often traced back to a vulgar term used for sexual acts. Some of the early sounds of jazz where associated with whore houses and "ladies of ill repute. " However, the meaning of jazz soon became a musical art form, whether under composition guidelines or improvisation, jazz reflected spontaneous melodic phrasing. Those who play jazz have often expressed the feelings that jazz should remain undefined, jazz should be felt. "If you gotta ask, you’ll never know" ---Louis Armstrong.

• • • The standard legend about jazz is that it was conceived in New Orleans and moved up the Mississippi River to Memphis, St. Louis and finally Chicago. Of course that seems to be the history of what we now refer to as jazz, however, the influences of what led to those early New Orleans sounds goes back to tribal African drum beats and European musical structures. "Jazz, like any artistic phenomenon, represents the sum of an addition. The factors of this addition are, to my mind, African music, French and American music and folklore. " ---Robert Goffin, 1934. In reviewing the background of jazz one can not overlook the evaluation over the decades and the fact that jazz spanned many musical forms such as spirituals, cakewalks, ragtime and the blues. Around 1891 a New Orleans barber named Buddy Bolden reputedly pitcked up his cornet and blew the first stammering notes of jazz, thereby unconsciously breaking with several centuries of musical tradition. A half-century later, jazz, America’s great contribution to music, crossed the threshold of the universities and became seriously, even religiously considered.

• • • Jazz functions as popular art and has enjoyed periods of fairly widespread public response, in the "jazz age" of the 1920 s, in the swing era of the late 1930 s and in the peak popularity of modern jazz in the late 1950 s. Beginning in the 20 s and continuing well into the 30 s, it was common to apply the word "jazz" rather indiscriminately, melodically or tonally. Thus George Gershwin was called a jazz composer. For Gershwin’s concert work he was acclaimed to have made a respectable art form out of jazz. Somewhat similarly, Paul Whiteman, playing jazzinfluenced dance music, was billed as the King of Jazz. Perhaps the broader definition of jazz, such as the one that would include the blues influence as well as those who shared our understanding of the art form, even if they did not perform it, would be the most useful historical approach. "It has always intrigued me, that people like Ma Rainey, Al Jolson and Guy Lombardo are considered a part of jazz history, but they are!" --Les Paul, 1994. The influence and development of the blues can not be over looked when discussing the early years of jazz.

• • • "The blues as such are synonymous with low spirits. Blues music is not. With all its so called blue notes and overtones of sadness, blues music of its very nature and function is nothing if not a form of diversion. " --Albert Murray. Those feelings as expression of blues music fits very comfortably with the strains and phrases of jazz. Today, Bessie Smith is considered primarily a blues singers, however in the 1920 s, she was most often referred to as a jazz singer. An ability to play the blues has been a requisite of all jazz musicians, who on first meeting one another or when taking part in a jam session, will often use the blues framework for improving. Blues, stemming from rural areas of the deep South, has a history largely independent of jazz. Exponents of blues usually accompanied themselves on guitar, piano or harmonica or were supported by small groups who often played unconventional or homemade instruments. A number of the early jazz performers relied on the blues for more than the chord exchanged. Many of these jazz musicians used the blues for the driving force of their musical emotions, such as the work of Don Redman, Stuff Smith, Ma Rainey and the early works of Louis Armstrong and Benny Carter. 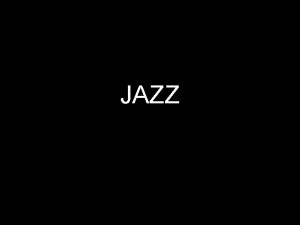 JAZZ JAZZ HISTORY Jazz is the art of 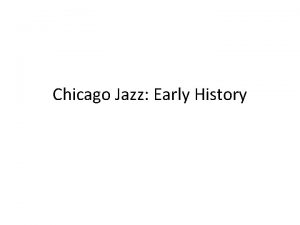 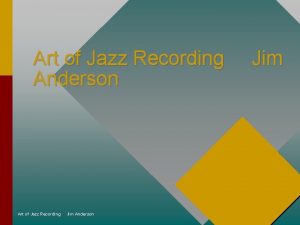 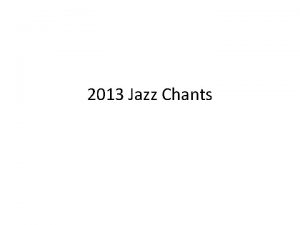 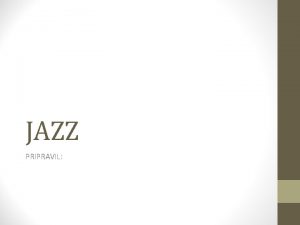 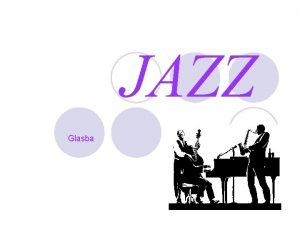 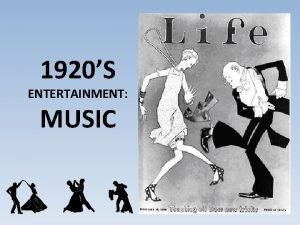 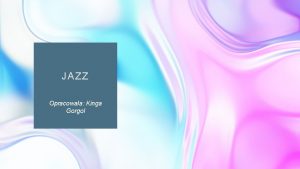 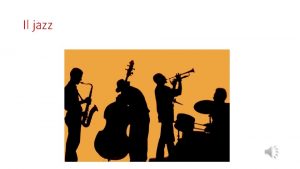