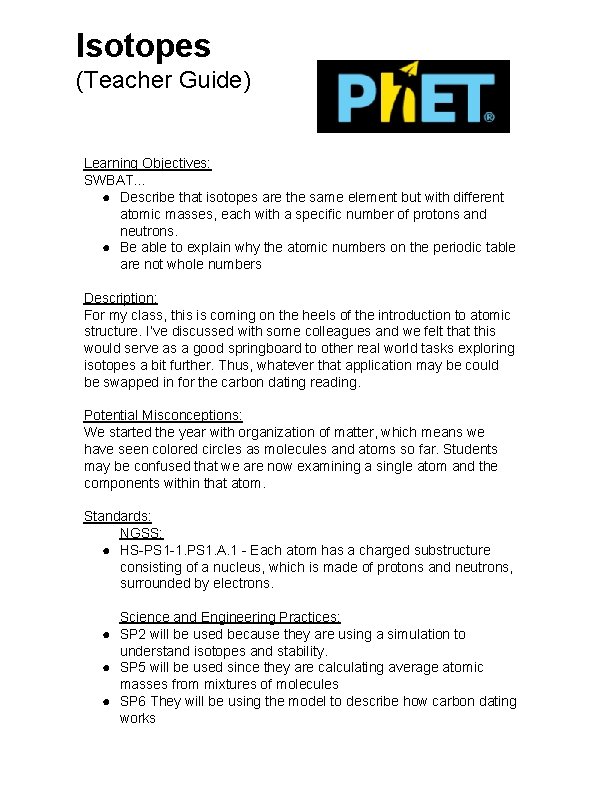 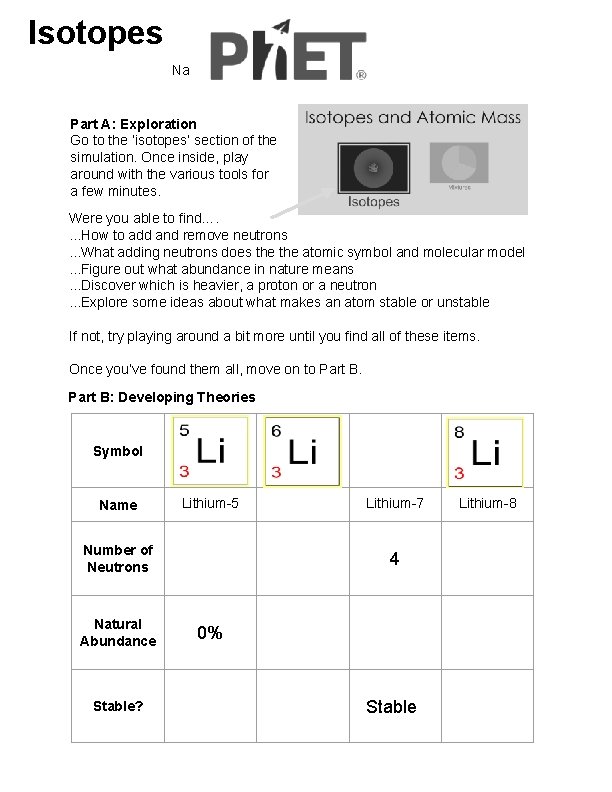 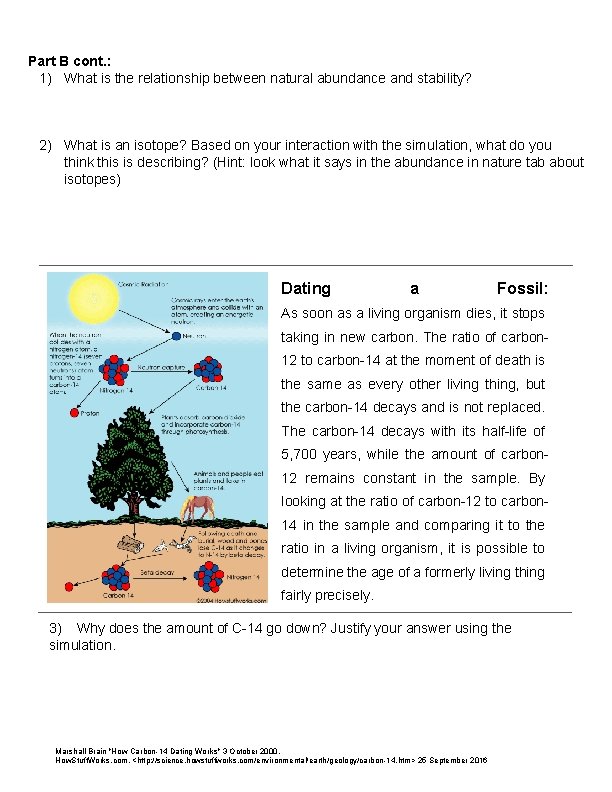 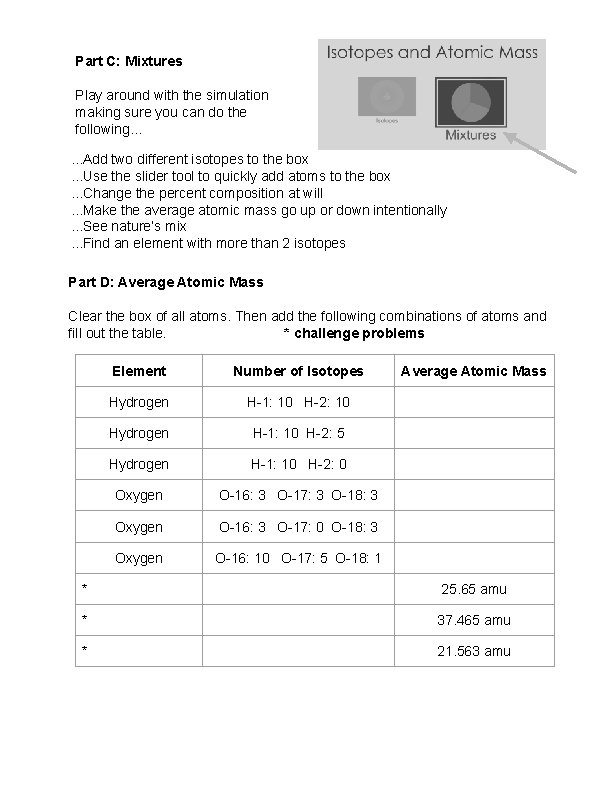 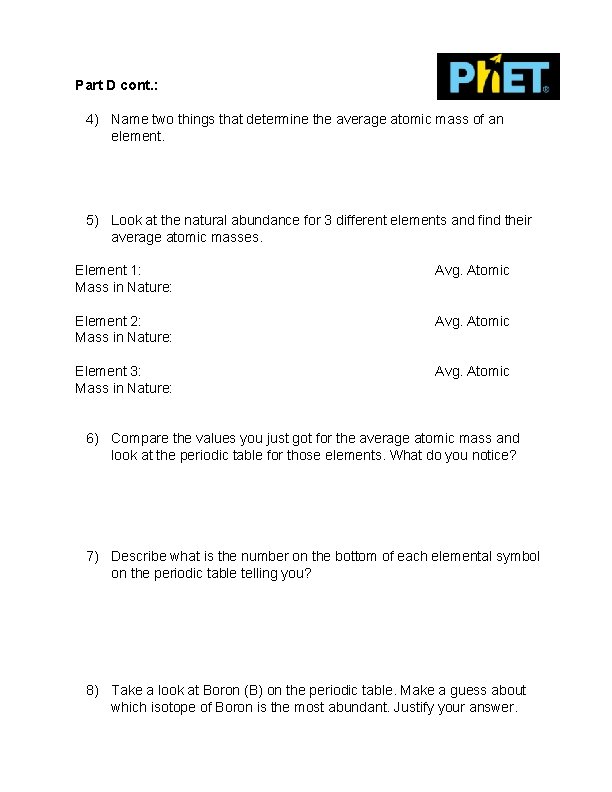 Isotopes (Teacher Guide) Learning Objectives: SWBAT. . . ● Describe that isotopes are the same element but with different atomic masses, each with a specific number of protons and neutrons. ● Be able to explain why the atomic numbers on the periodic table are not whole numbers Description: For my class, this is coming on the heels of the introduction to atomic structure. I’ve discussed with some colleagues and we felt that this would serve as a good springboard to other real world tasks exploring isotopes a bit further. Thus, whatever that application may be could be swapped in for the carbon dating reading. Potential Misconceptions: We started the year with organization of matter, which means we have seen colored circles as molecules and atoms so far. Students may be confused that we are now examining a single atom and the components within that atom. Standards: NGSS: ● HS-PS 1 -1. PS 1. A. 1 - Each atom has a charged substructure consisting of a nucleus, which is made of protons and neutrons, surrounded by electrons. Science and Engineering Practices: ● SP 2 will be used because they are using a simulation to understand isotopes and stability. ● SP 5 will be used since they are calculating average atomic masses from mixtures of molecules ● SP 6 They will be using the model to describe how carbon dating works

Isotopes Name: Part A: Exploration Go to the ‘isotopes’ section of the simulation. Once inside, play around with the various tools for a few minutes. Were you able to find…. . How to add and remove neutrons. . . What adding neutrons does the atomic symbol and molecular model. . . Figure out what abundance in nature means. . . Discover which is heavier, a proton or a neutron. . . Explore some ideas about what makes an atom stable or unstable If not, try playing around a bit more until you find all of these items. Once you’ve found them all, move on to Part B: Developing Theories Symbol Name Lithium-5 Number of Neutrons Natural Abundance Stable? Lithium-7 4 0% Stable Lithium-8

Part B cont. : 1) What is the relationship between natural abundance and stability? 2) What is an isotope? Based on your interaction with the simulation, what do you think this is describing? (Hint: look what it says in the abundance in nature tab about isotopes) Dating a Fossil: As soon as a living organism dies, it stops taking in new carbon. The ratio of carbon 12 to carbon-14 at the moment of death is the same as every other living thing, but the carbon-14 decays and is not replaced. The carbon-14 decays with its half-life of 5, 700 years, while the amount of carbon 12 remains constant in the sample. By looking at the ratio of carbon-12 to carbon 14 in the sample and comparing it to the ratio in a living organism, it is possible to determine the age of a formerly living thing fairly precisely. 3) Why does the amount of C-14 go down? Justify your answer using the simulation. Marshall Brain "How Carbon-14 Dating Works" 3 October 2000. How. Stuff. Works. com. <http: //science. howstuffworks. com/environmental/earth/geology/carbon-14. htm> 25 September 2016 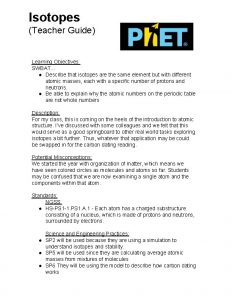 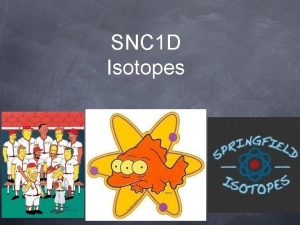 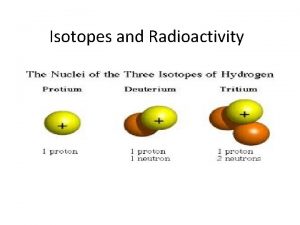 Isotopes and Radioactivity Isotopes Isotopes are atoms of 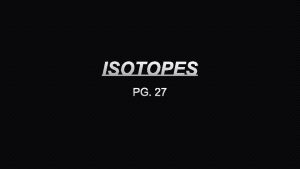