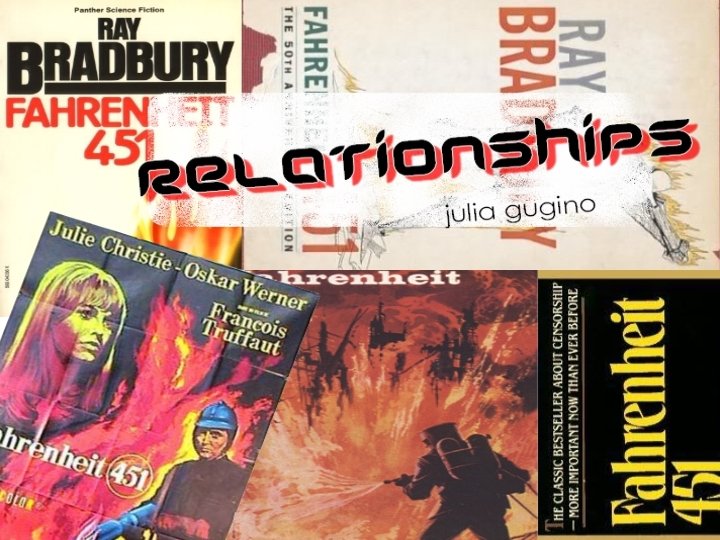 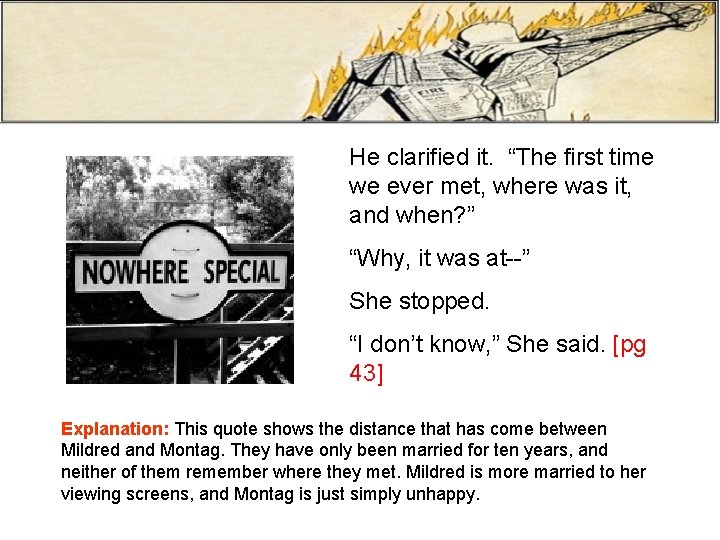 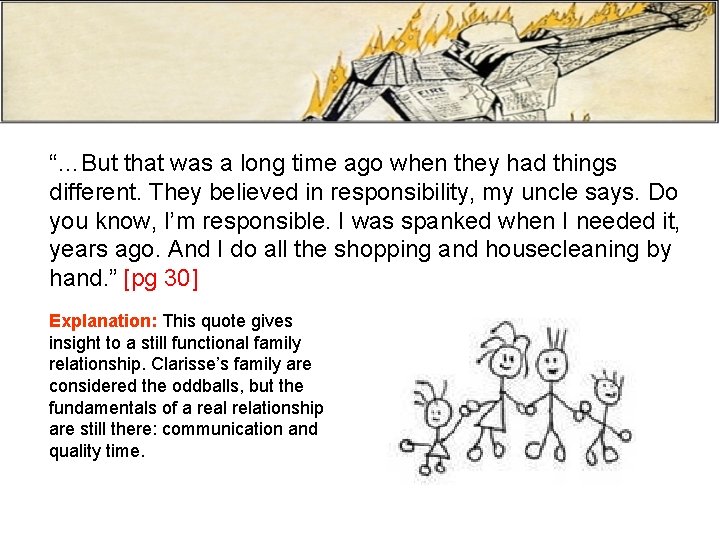 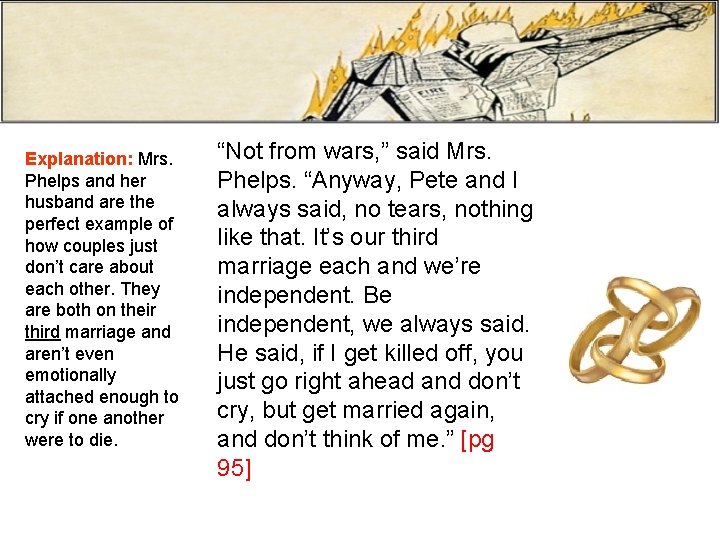 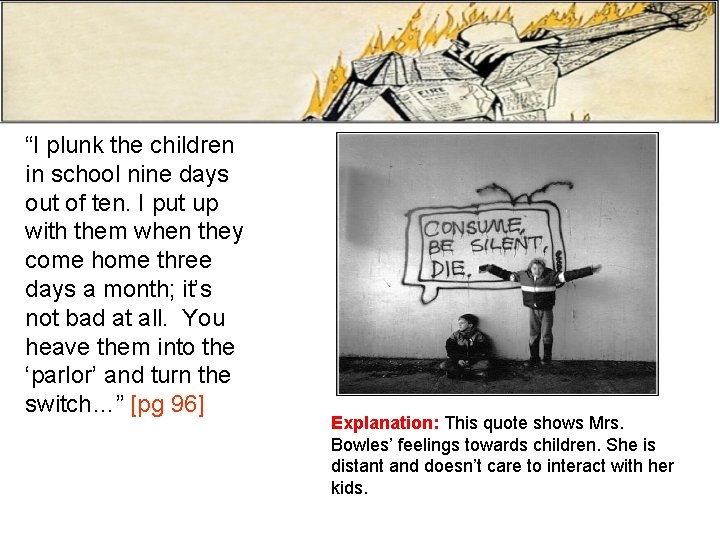 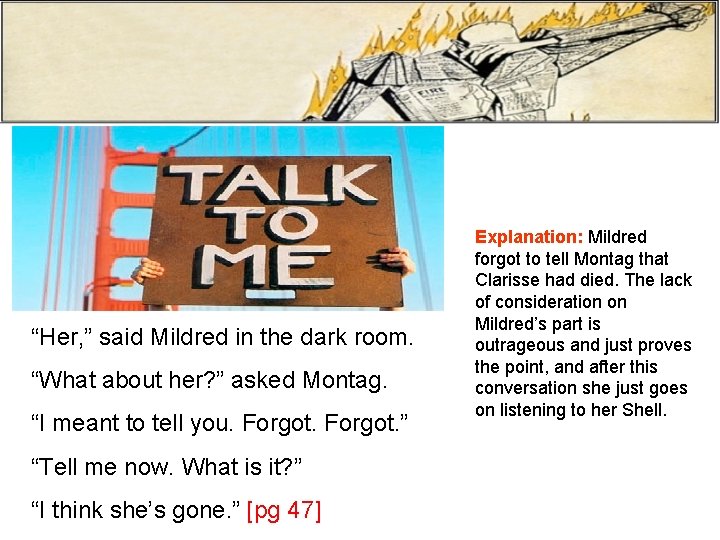 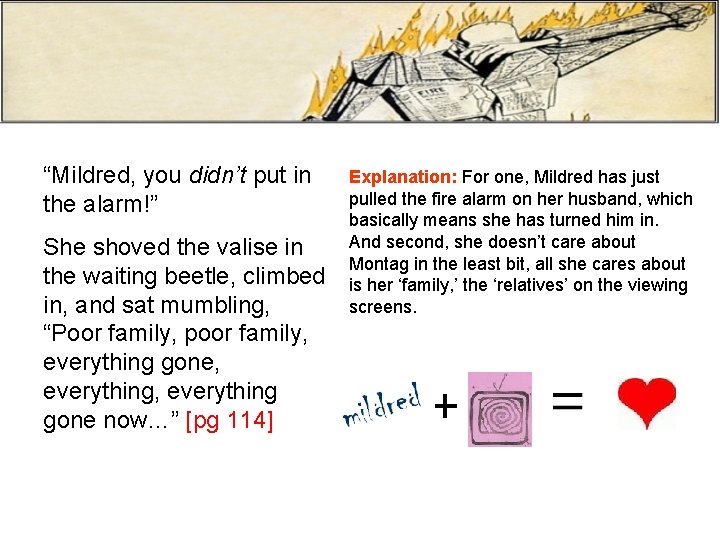 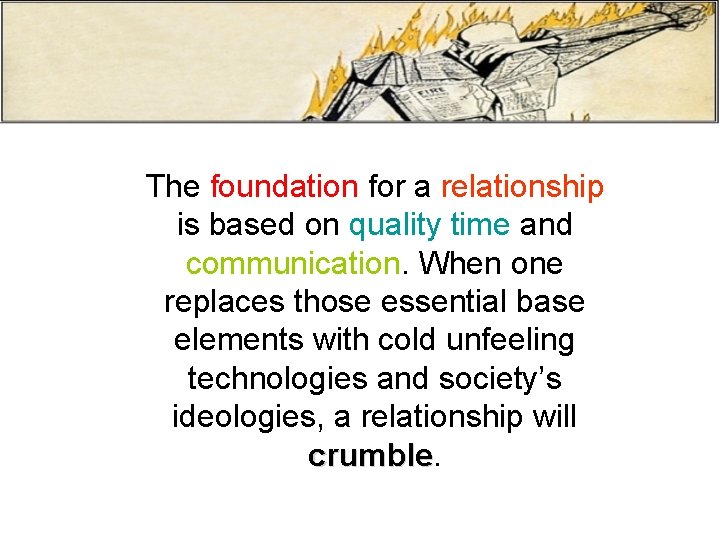 He clarified it. “The first time we ever met, where was it, and when? ” “Why, it was at--” She stopped. “I don’t know, ” She said. [pg 43] Explanation: This quote shows the distance that has come between Mildred and Montag. They have only been married for ten years, and neither of them remember where they met. Mildred is more married to her viewing screens, and Montag is just simply unhappy.

“…But that was a long time ago when they had things different. They believed in responsibility, my uncle says. Do you know, I’m responsible. I was spanked when I needed it, years ago. And I do all the shopping and housecleaning by hand. ” [pg 30] Explanation: This quote gives insight to a still functional family relationship. Clarisse’s family are considered the oddballs, but the fundamentals of a real relationship are still there: communication and quality time.

Explanation: Mrs. Phelps and her husband are the perfect example of how couples just don’t care about each other. They are both on their third marriage and aren’t even emotionally attached enough to cry if one another were to die. “Not from wars, ” said Mrs. Phelps. “Anyway, Pete and I always said, no tears, nothing like that. It’s our third marriage each and we’re independent. Be independent, we always said. He said, if I get killed off, you just go right ahead and don’t cry, but get married again, and don’t think of me. ” [pg 95]

“I plunk the children in school nine days out of ten. I put up with them when they come home three days a month; it’s not bad at all. You heave them into the ‘parlor’ and turn the switch…” [pg 96] Explanation: This quote shows Mrs. Bowles’ feelings towards children. She is distant and doesn’t care to interact with her kids.

“Her, ” said Mildred in the dark room. “What about her? ” asked Montag. “I meant to tell you. Forgot. ” “Tell me now. What is it? ” “I think she’s gone. ” [pg 47] Explanation: Mildred forgot to tell Montag that Clarisse had died. The lack of consideration on Mildred’s part is outrageous and just proves the point, and after this conversation she just goes on listening to her Shell.

“Mildred, you didn’t put in the alarm!” She shoved the valise in the waiting beetle, climbed in, and sat mumbling, “Poor family, poor family, everything gone, everything gone now…” [pg 114] Explanation: For one, Mildred has just pulled the fire alarm on her husband, which basically means she has turned him in. And second, she doesn’t care about Montag in the least bit, all she cares about is her ‘family, ’ the ‘relatives’ on the viewing screens.

The foundation for a relationship is based on quality time and communication. When one replaces those essential base elements with cold unfeeling technologies and society’s ideologies, a relationship will crumble 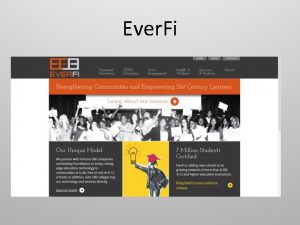 Ever Fi What is Ever Fi Ever Fi 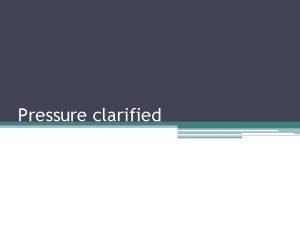 Pressure clarified Pressure What affects the pressure of 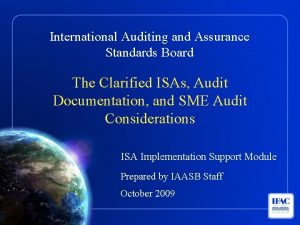 International Auditing and Assurance Standards Board The Clarified 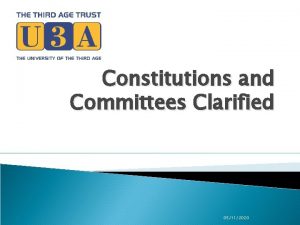 Constitutions and Committees Clarified 05112020 U 3 As 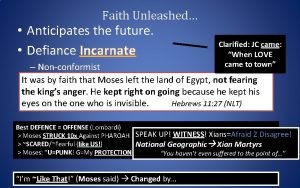 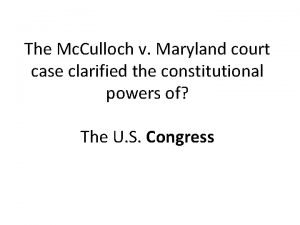 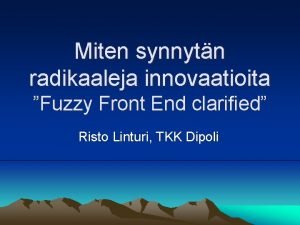