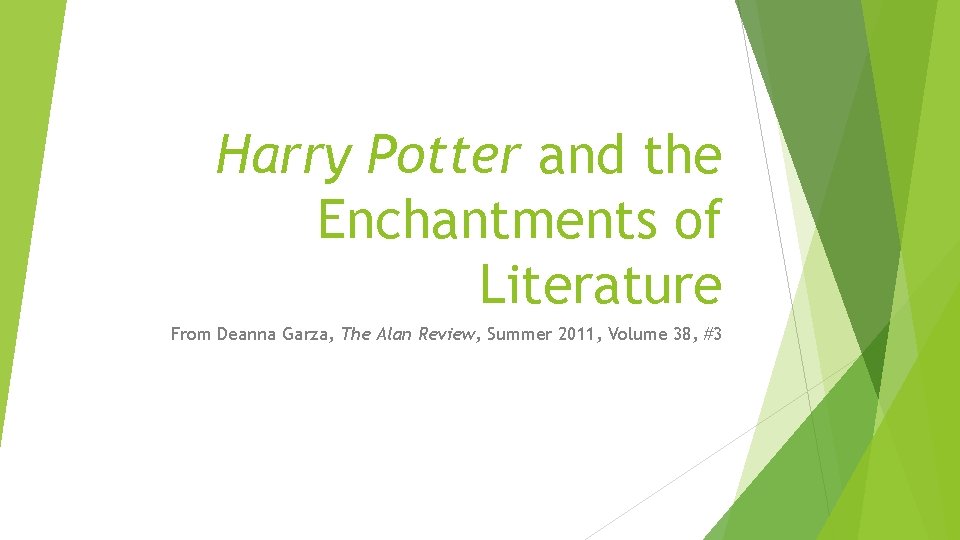 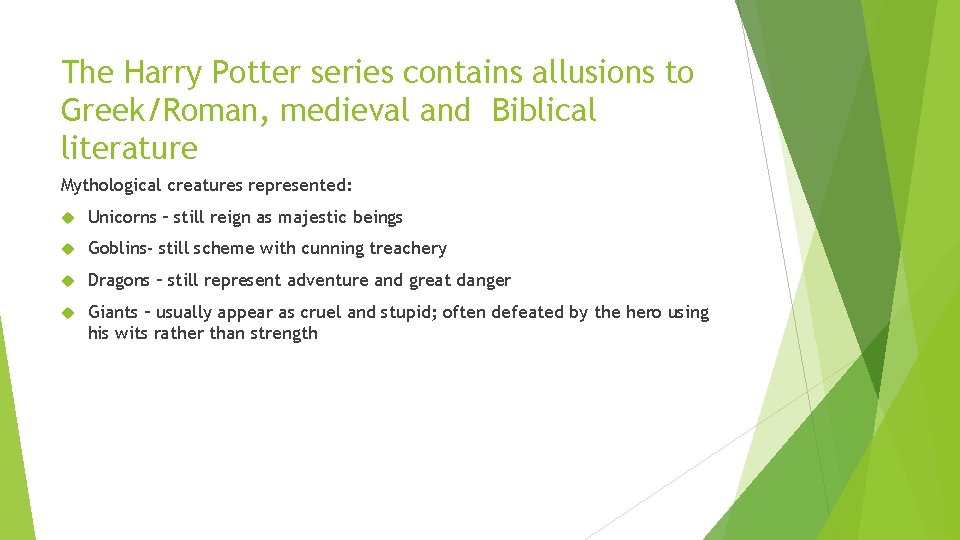 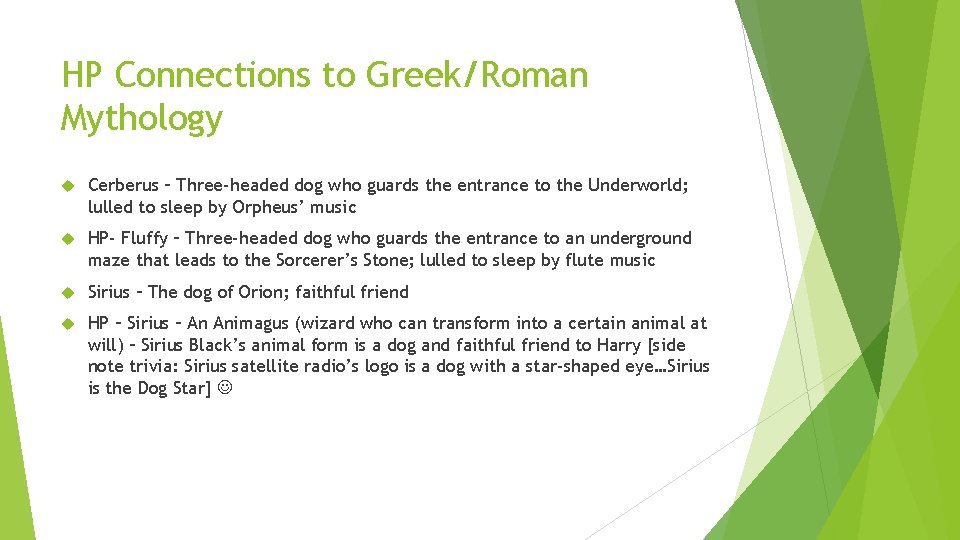 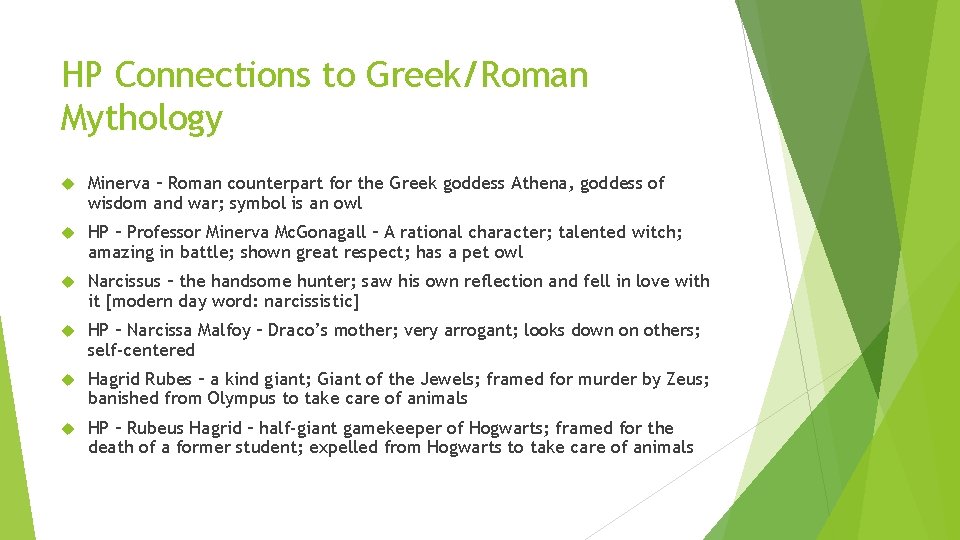 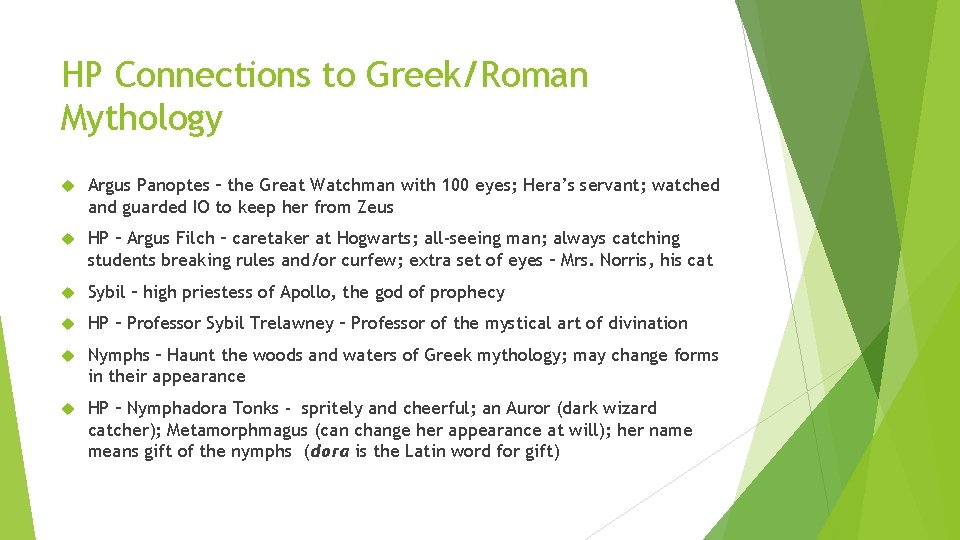 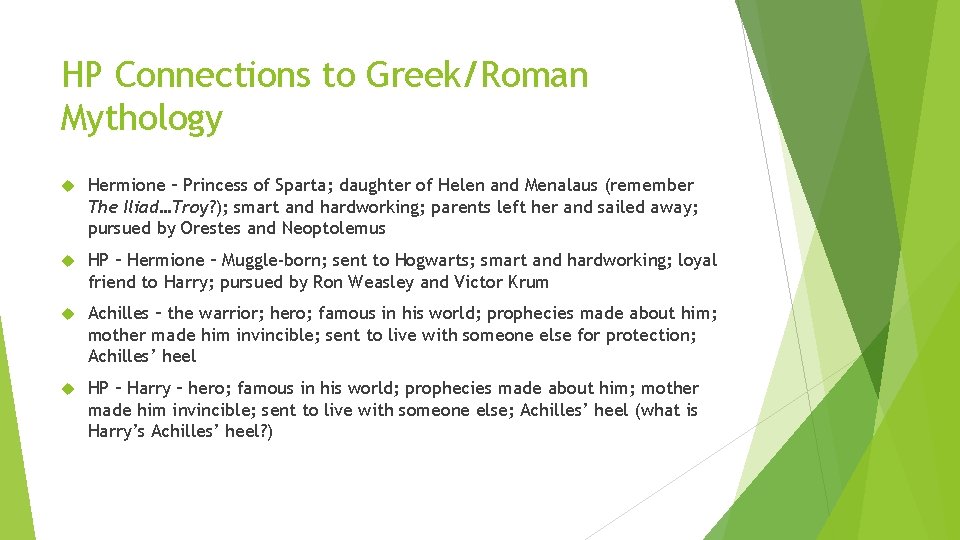 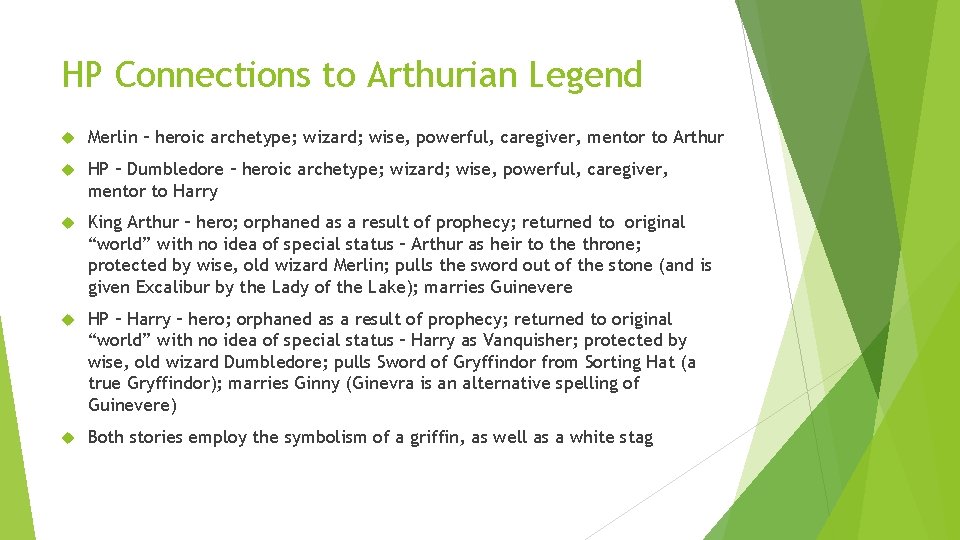 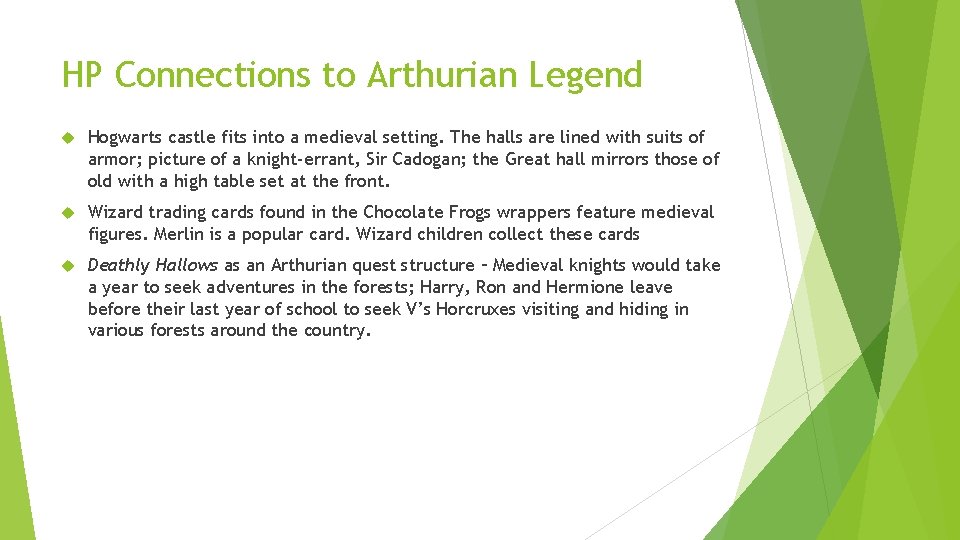 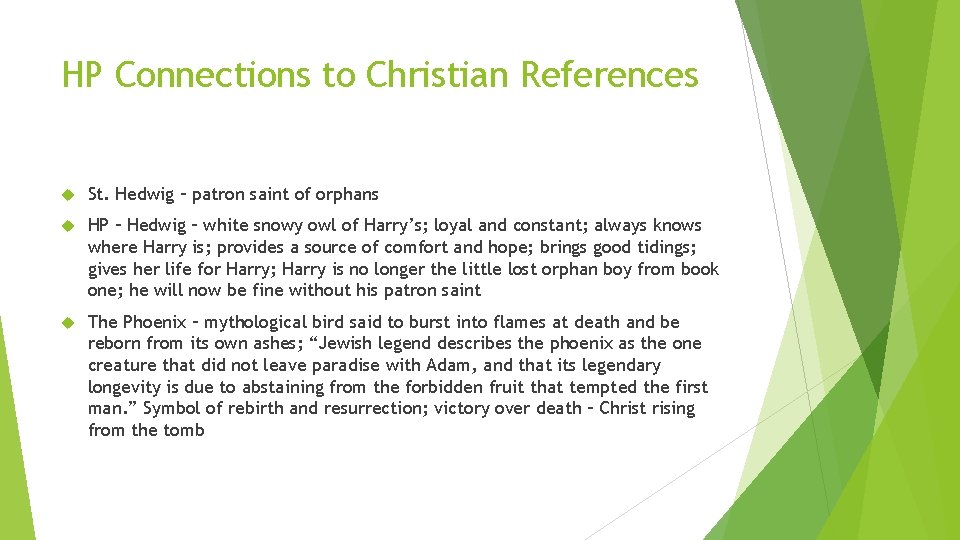 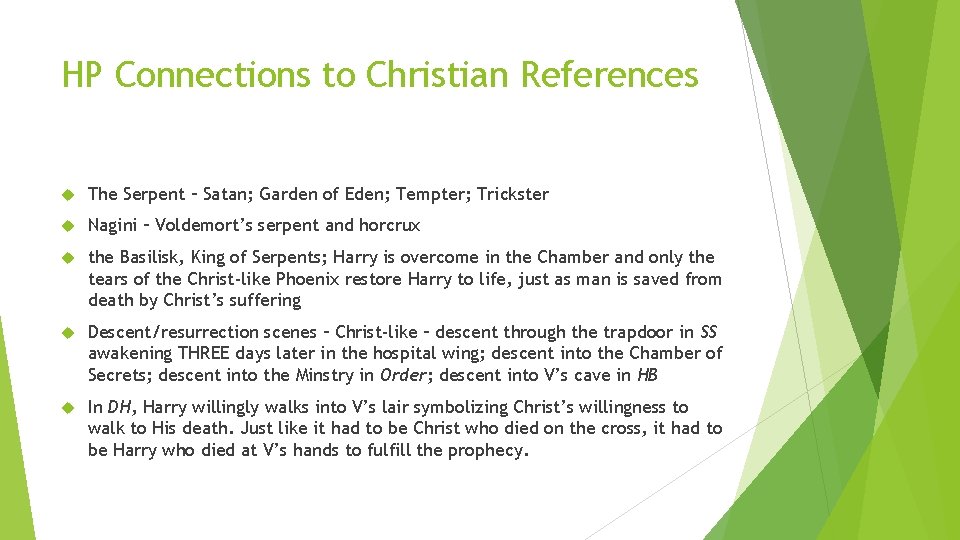 Harry Potter and the Enchantments of Literature From Deanna Garza, The Alan Review, Summer 2011, Volume 38, #3

HP Connections to Greek/Roman Mythology Cerberus – Three-headed dog who guards the entrance to the Underworld; lulled to sleep by Orpheus’ music HP- Fluffy – Three-headed dog who guards the entrance to an underground maze that leads to the Sorcerer’s Stone; lulled to sleep by flute music Sirius – The dog of Orion; faithful friend HP – Sirius – An Animagus (wizard who can transform into a certain animal at will) – Sirius Black’s animal form is a dog and faithful friend to Harry [side note trivia: Sirius satellite radio’s logo is a dog with a star-shaped eye…Sirius is the Dog Star]

HP Connections to Greek/Roman Mythology Minerva – Roman counterpart for the Greek goddess Athena, goddess of wisdom and war; symbol is an owl HP – Professor Minerva Mc. Gonagall – A rational character; talented witch; amazing in battle; shown great respect; has a pet owl Narcissus – the handsome hunter; saw his own reflection and fell in love with it [modern day word: narcissistic] HP – Narcissa Malfoy – Draco’s mother; very arrogant; looks down on others; self-centered Hagrid Rubes – a kind giant; Giant of the Jewels; framed for murder by Zeus; banished from Olympus to take care of animals HP – Rubeus Hagrid – half-giant gamekeeper of Hogwarts; framed for the death of a former student; expelled from Hogwarts to take care of animals

HP Connections to Greek/Roman Mythology Argus Panoptes – the Great Watchman with 100 eyes; Hera’s servant; watched and guarded IO to keep her from Zeus HP – Argus Filch – caretaker at Hogwarts; all-seeing man; always catching students breaking rules and/or curfew; extra set of eyes – Mrs. Norris, his cat Sybil – high priestess of Apollo, the god of prophecy HP – Professor Sybil Trelawney – Professor of the mystical art of divination Nymphs – Haunt the woods and waters of Greek mythology; may change forms in their appearance HP – Nymphadora Tonks - spritely and cheerful; an Auror (dark wizard catcher); Metamorphmagus (can change her appearance at will); her name means gift of the nymphs (dora is the Latin word for gift)

HP Connections to Arthurian Legend Hogwarts castle fits into a medieval setting. The halls are lined with suits of armor; picture of a knight-errant, Sir Cadogan; the Great hall mirrors those of old with a high table set at the front. Wizard trading cards found in the Chocolate Frogs wrappers feature medieval figures. Merlin is a popular card. Wizard children collect these cards Deathly Hallows as an Arthurian quest structure – Medieval knights would take a year to seek adventures in the forests; Harry, Ron and Hermione leave before their last year of school to seek V’s Horcruxes visiting and hiding in various forests around the country.

HP Connections to Christian References St. Hedwig – patron saint of orphans HP – Hedwig – white snowy owl of Harry’s; loyal and constant; always knows where Harry is; provides a source of comfort and hope; brings good tidings; gives her life for Harry; Harry is no longer the little lost orphan boy from book one; he will now be fine without his patron saint The Phoenix – mythological bird said to burst into flames at death and be reborn from its own ashes; “Jewish legend describes the phoenix as the one creature that did not leave paradise with Adam, and that its legendary longevity is due to abstaining from the forbidden fruit that tempted the first man. ” Symbol of rebirth and resurrection; victory over death – Christ rising from the tomb

HP Connections to Christian References The Serpent – Satan; Garden of Eden; Tempter; Trickster Nagini – Voldemort’s serpent and horcrux the Basilisk, King of Serpents; Harry is overcome in the Chamber and only the tears of the Christ-like Phoenix restore Harry to life, just as man is saved from death by Christ’s suffering Descent/resurrection scenes – Christ-like – descent through the trapdoor in SS awakening THREE days later in the hospital wing; descent into the Chamber of Secrets; descent into the Minstry in Order; descent into V’s cave in HB In DH, Harry willingly walks into V’s lair symbolizing Christ’s willingness to walk to His death. Just like it had to be Christ who died on the cross, it had to be Harry who died at V’s hands to fulfill the prophecy. 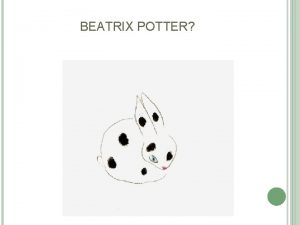 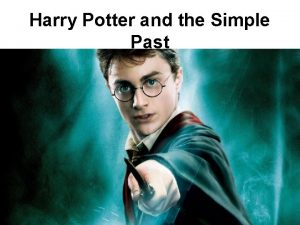 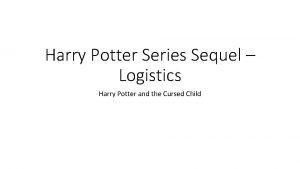 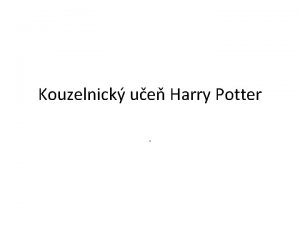 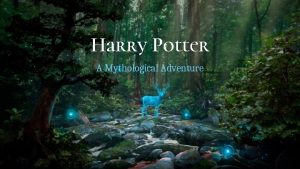 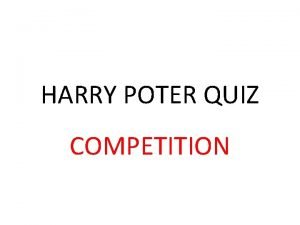 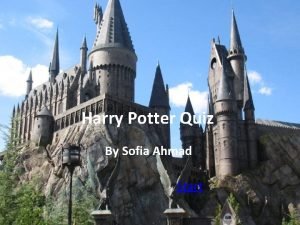 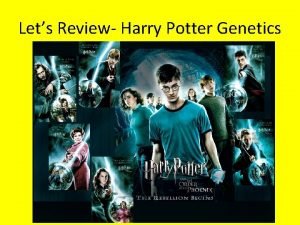 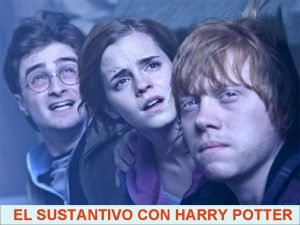