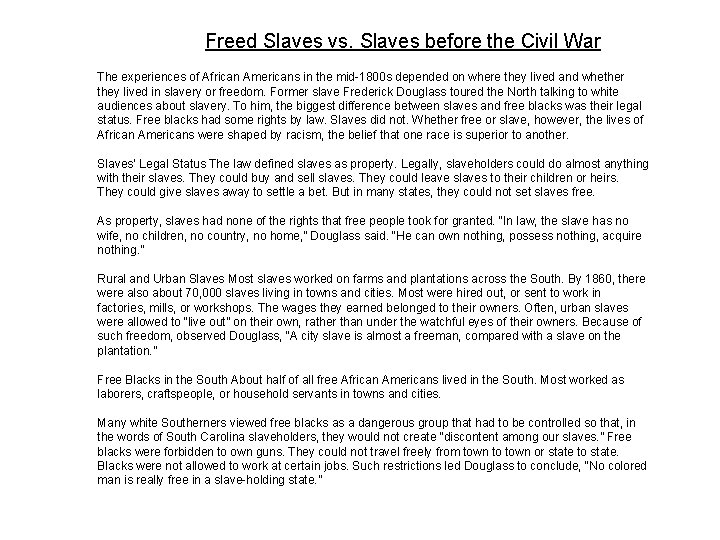 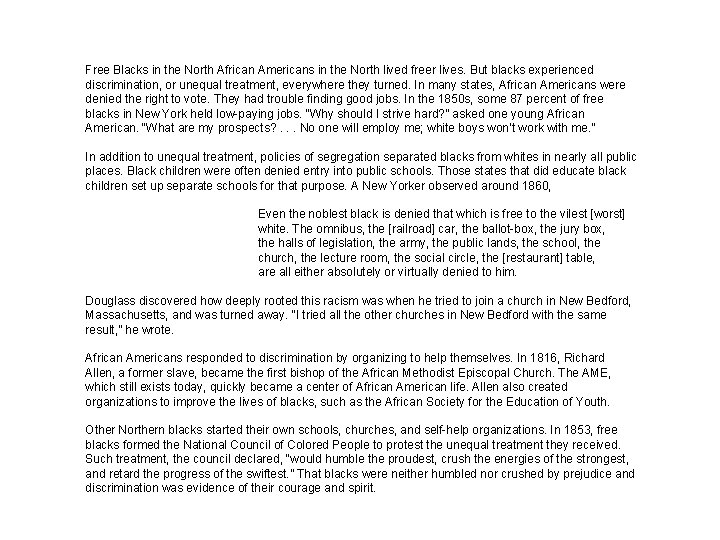 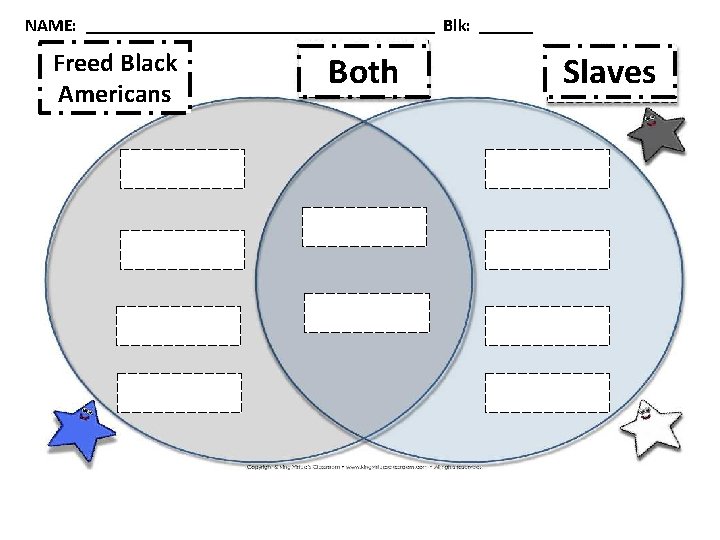 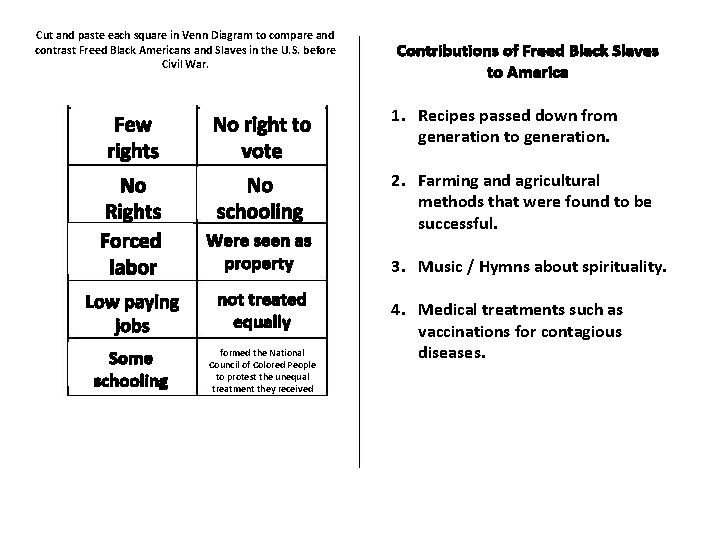 Freed Slaves vs. Slaves before the Civil War The experiences of African Americans in the mid-1800 s depended on where they lived and whether they lived in slavery or freedom. Former slave Frederick Douglass toured the North talking to white audiences about slavery. To him, the biggest difference between slaves and free blacks was their legal status. Free blacks had some rights by law. Slaves did not. Whether free or slave, however, the lives of African Americans were shaped by racism, the belief that one race is superior to another. Slaves’ Legal Status The law defined slaves as property. Legally, slaveholders could do almost anything with their slaves. They could buy and sell slaves. They could leave slaves to their children or heirs. They could give slaves away to settle a bet. But in many states, they could not set slaves free. As property, slaves had none of the rights that free people took for granted. “In law, the slave has no wife, no children, no country, no home, ” Douglass said. “He can own nothing, possess nothing, acquire nothing. ” Rural and Urban Slaves Most slaves worked on farms and plantations across the South. By 1860, there were also about 70, 000 slaves living in towns and cities. Most were hired out, or sent to work in factories, mills, or workshops. The wages they earned belonged to their owners. Often, urban slaves were allowed to “live out” on their own, rather than under the watchful eyes of their owners. Because of such freedom, observed Douglass, “A city slave is almost a freeman, compared with a slave on the plantation. ” Free Blacks in the South About half of all free African Americans lived in the South. Most worked as laborers, craftspeople, or household servants in towns and cities. Many white Southerners viewed free blacks as a dangerous group that had to be controlled so that, in the words of South Carolina slaveholders, they would not create “discontent among our slaves. ” Free blacks were forbidden to own guns. They could not travel freely from town to town or state to state. Blacks were not allowed to work at certain jobs. Such restrictions led Douglass to conclude, “No colored man is really free in a slave-holding state. ”

Free Blacks in the North African Americans in the North lived freer lives. But blacks experienced discrimination, or unequal treatment, everywhere they turned. In many states, African Americans were denied the right to vote. They had trouble finding good jobs. In the 1850 s, some 87 percent of free blacks in New York held low-paying jobs. “Why should I strive hard? ” asked one young African American. “What are my prospects? . . . No one will employ me; white boys won’t work with me. ” In addition to unequal treatment, policies of segregation separated blacks from whites in nearly all public places. Black children were often denied entry into public schools. Those states that did educate black children set up separate schools for that purpose. A New Yorker observed around 1860, Even the noblest black is denied that which is free to the vilest [worst] white. The omnibus, the [railroad] car, the ballot-box, the jury box, the halls of legislation, the army, the public lands, the school, the church, the lecture room, the social circle, the [restaurant] table, are all either absolutely or virtually denied to him. Douglass discovered how deeply rooted this racism was when he tried to join a church in New Bedford, Massachusetts, and was turned away. “I tried all the other churches in New Bedford with the same result, ” he wrote. African Americans responded to discrimination by organizing to help themselves. In 1816, Richard Allen, a former slave, became the first bishop of the African Methodist Episcopal Church. The AME, which still exists today, quickly became a center of African American life. Allen also created organizations to improve the lives of blacks, such as the African Society for the Education of Youth. Other Northern blacks started their own schools, churches, and self-help organizations. In 1853, free blacks formed the National Council of Colored People to protest the unequal treatment they received. Such treatment, the council declared, “would humble the proudest, crush the energies of the strongest, and retard the progress of the swiftest. ” That blacks were neither humbled nor crushed by prejudice and discrimination was evidence of their courage and spirit.

Free African Americans Slaves Cut and paste each square in Venn Diagram to compare and contrast Freed Black Americans and Slaves in the U. S. before Civil War. Contributions of Freed Black Slaves to America Few rights No right to vote 1. Recipes passed down from generation to generation. No Rights Forced labor No schooling Were seen as property 2. Farming and agricultural methods that were found to be successful. Low paying jobs not treated equally Some schooling formed the National Council of Colored People to protest the unequal treatment they received 3. Music / Hymns about spirituality. 4. Medical treatments such as vaccinations for contagious diseases. 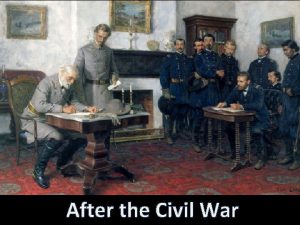 After the Civil War Slaves Freed The South 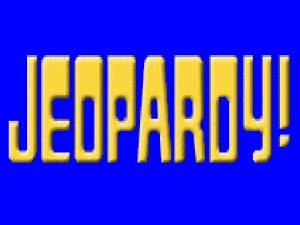 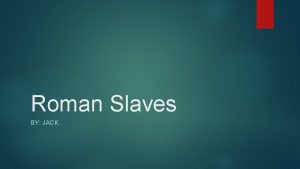 Roman Slaves BY JACK Who are Slaves Slaves