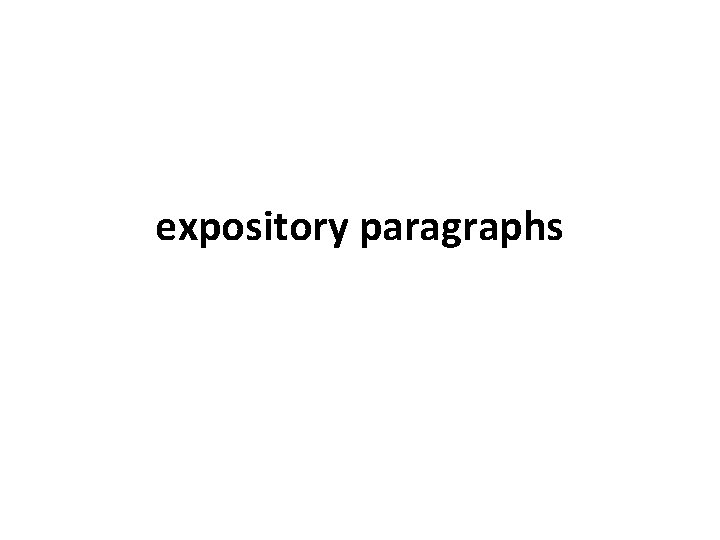 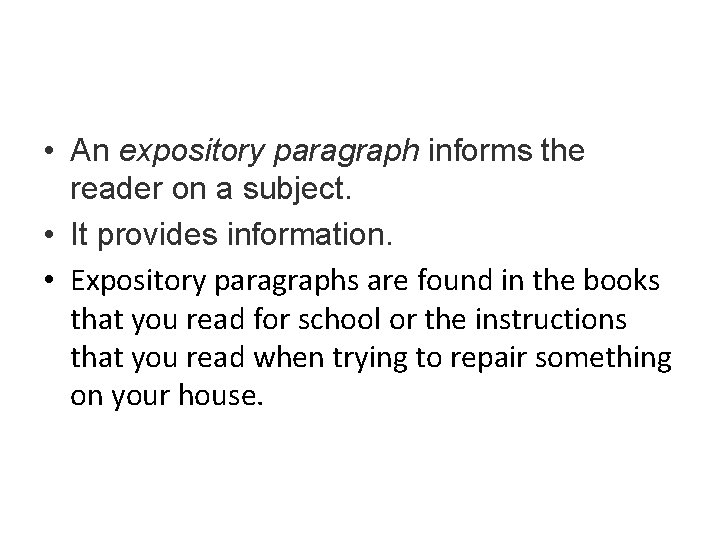 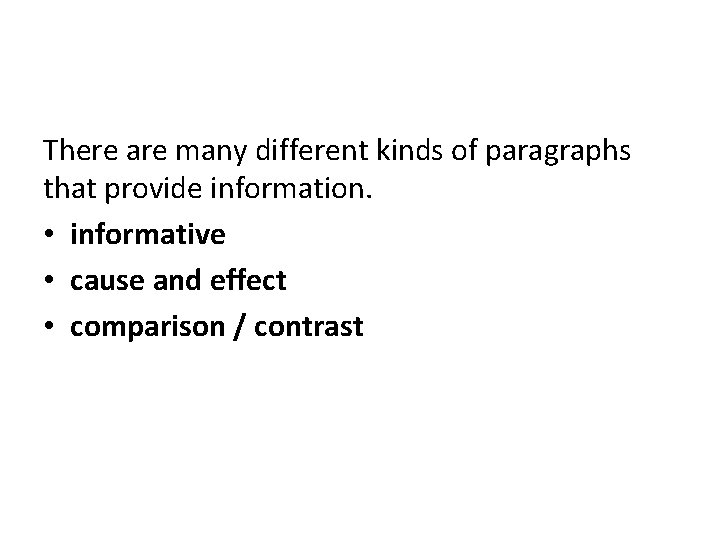 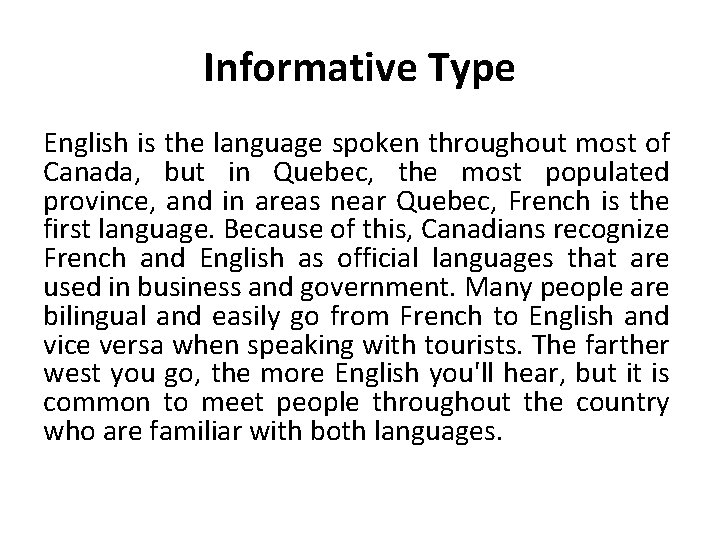 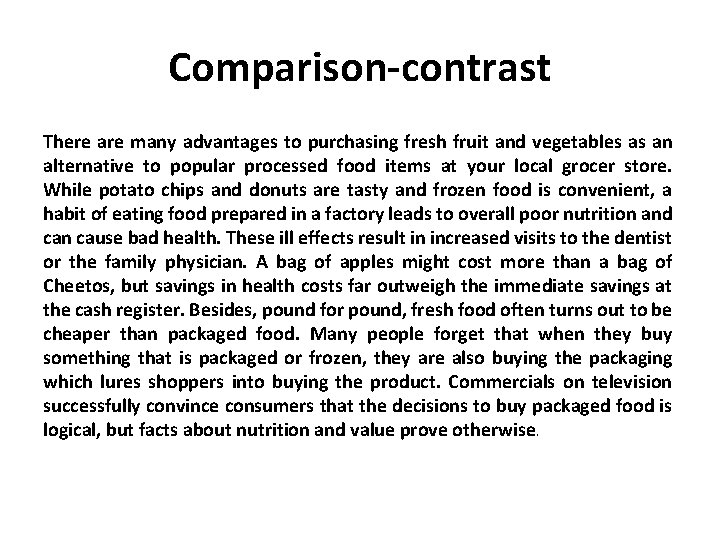 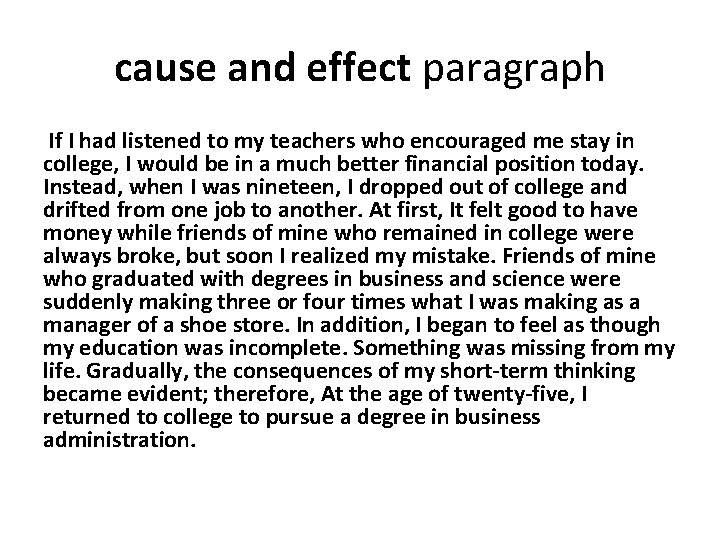 There are many different kinds of paragraphs that provide information. • informative • cause and effect • comparison / contrast

Informative Type English is the language spoken throughout most of Canada, but in Quebec, the most populated province, and in areas near Quebec, French is the first language. Because of this, Canadians recognize French and English as official languages that are used in business and government. Many people are bilingual and easily go from French to English and vice versa when speaking with tourists. The farther west you go, the more English you'll hear, but it is common to meet people throughout the country who are familiar with both languages.

Comparison-contrast There are many advantages to purchasing fresh fruit and vegetables as an alternative to popular processed food items at your local grocer store. While potato chips and donuts are tasty and frozen food is convenient, a habit of eating food prepared in a factory leads to overall poor nutrition and can cause bad health. These ill effects result in increased visits to the dentist or the family physician. A bag of apples might cost more than a bag of Cheetos, but savings in health costs far outweigh the immediate savings at the cash register. Besides, pound for pound, fresh food often turns out to be cheaper than packaged food. Many people forget that when they buy something that is packaged or frozen, they are also buying the packaging which lures shoppers into buying the product. Commercials on television successfully convince consumers that the decisions to buy packaged food is logical, but facts about nutrition and value prove otherwise.

cause and effect paragraph If I had listened to my teachers who encouraged me stay in college, I would be in a much better financial position today. Instead, when I was nineteen, I dropped out of college and drifted from one job to another. At first, It felt good to have money while friends of mine who remained in college were always broke, but soon I realized my mistake. Friends of mine who graduated with degrees in business and science were suddenly making three or four times what I was making as a manager of a shoe store. In addition, I began to feel as though my education was incomplete. Something was missing from my life. Gradually, the consequences of my short-term thinking became evident; therefore, At the age of twenty-five, I returned to college to pursue a degree in business administration. 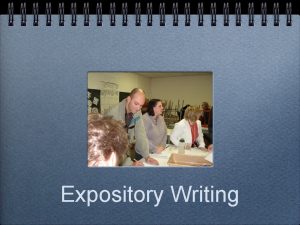 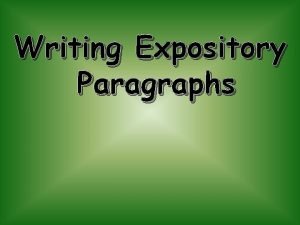 Writing Expository Paragraphs What is an expository paragraph 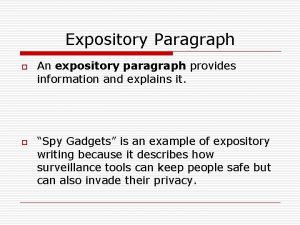 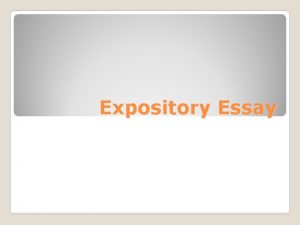 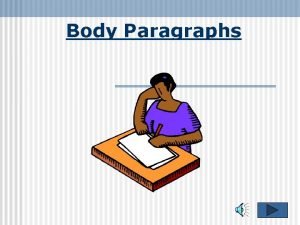