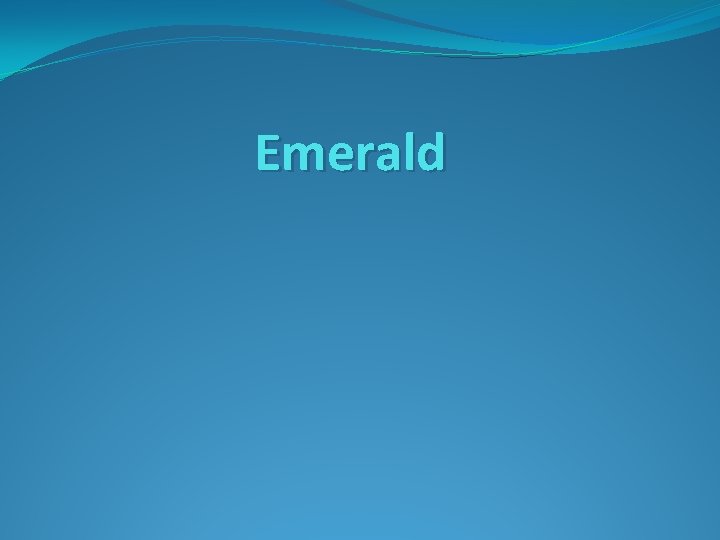 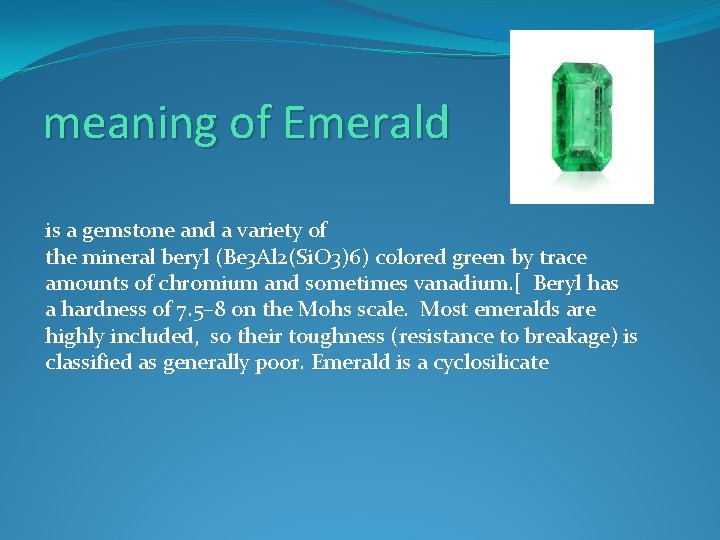 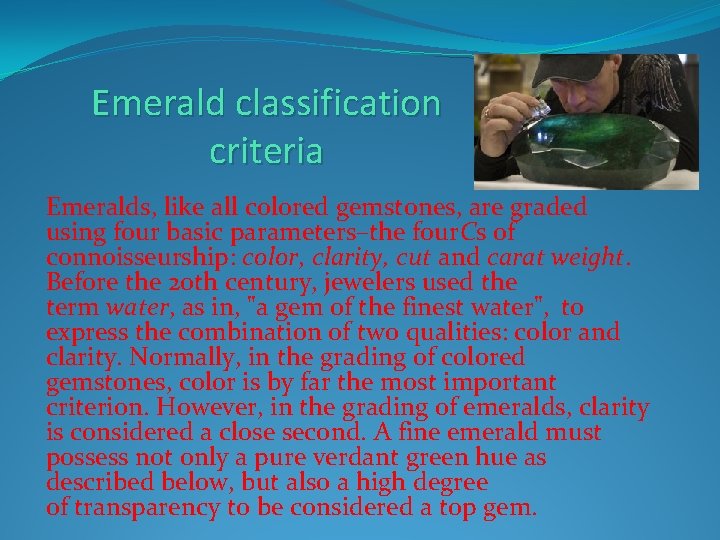 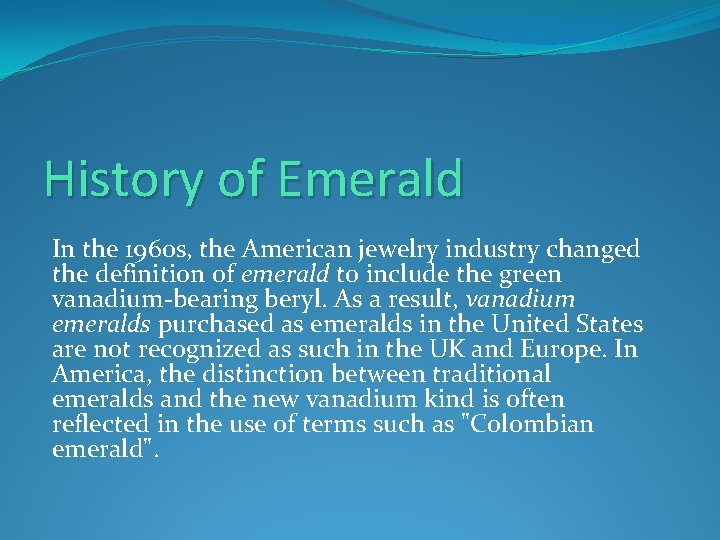 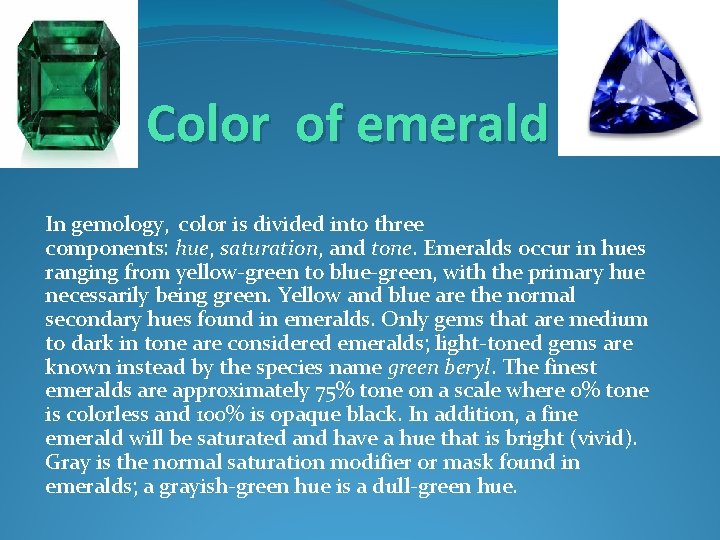 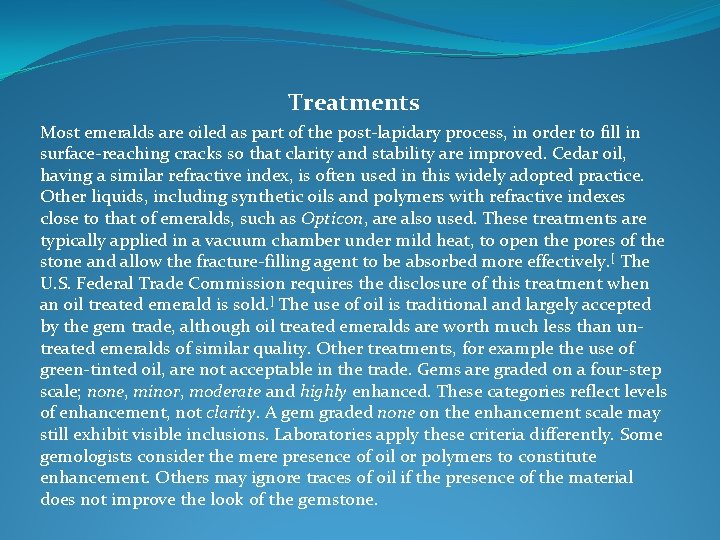 meaning of Emerald is a gemstone and a variety of the mineral beryl (Be 3 Al 2(Si. O 3)6) colored green by trace amounts of chromium and sometimes vanadium. [ Beryl has a hardness of 7. 5– 8 on the Mohs scale. Most emeralds are highly included, so their toughness (resistance to breakage) is classified as generally poor. Emerald is a cyclosilicate

Emerald classification criteria Emeralds, like all colored gemstones, are graded using four basic parameters–the four. Cs of connoisseurship: color, clarity, cut and carat weight. Before the 20 th century, jewelers used the term water, as in, "a gem of the finest water", to express the combination of two qualities: color and clarity. Normally, in the grading of colored gemstones, color is by far the most important criterion. However, in the grading of emeralds, clarity is considered a close second. A fine emerald must possess not only a pure verdant green hue as described below, but also a high degree of transparency to be considered a top gem.

History of Emerald In the 1960 s, the American jewelry industry changed the definition of emerald to include the green vanadium-bearing beryl. As a result, vanadium emeralds purchased as emeralds in the United States are not recognized as such in the UK and Europe. In America, the distinction between traditional emeralds and the new vanadium kind is often reflected in the use of terms such as "Colombian emerald".

Color of emerald In gemology, color is divided into three components: hue, saturation, and tone. Emeralds occur in hues ranging from yellow-green to blue-green, with the primary hue necessarily being green. Yellow and blue are the normal secondary hues found in emeralds. Only gems that are medium to dark in tone are considered emeralds; light-toned gems are known instead by the species name green beryl. The finest emeralds are approximately 75% tone on a scale where 0% tone is colorless and 100% is opaque black. In addition, a fine emerald will be saturated and have a hue that is bright (vivid). Gray is the normal saturation modifier or mask found in emeralds; a grayish-green hue is a dull-green hue.

Treatments Most emeralds are oiled as part of the post-lapidary process, in order to fill in surface-reaching cracks so that clarity and stability are improved. Cedar oil, having a similar refractive index, is often used in this widely adopted practice. Other liquids, including synthetic oils and polymers with refractive indexes close to that of emeralds, such as Opticon, are also used. These treatments are typically applied in a vacuum chamber under mild heat, to open the pores of the stone and allow the fracture-filling agent to be absorbed more effectively. [ The U. S. Federal Trade Commission requires the disclosure of this treatment when an oil treated emerald is sold. ] The use of oil is traditional and largely accepted by the gem trade, although oil treated emeralds are worth much less than untreated emeralds of similar quality. Other treatments, for example the use of green-tinted oil, are not acceptable in the trade. Gems are graded on a four-step scale; none, minor, moderate and highly enhanced. These categories reflect levels of enhancement, not clarity. A gem graded none on the enhancement scale may still exhibit visible inclusions. Laboratories apply these criteria differently. Some gemologists consider the mere presence of oil or polymers to constitute enhancement. Others may ignore traces of oil if the presence of the material does not improve the look of the gemstone. 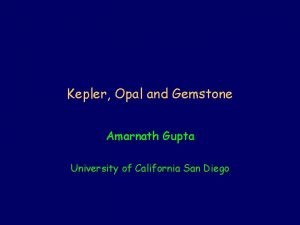 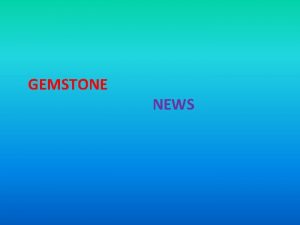 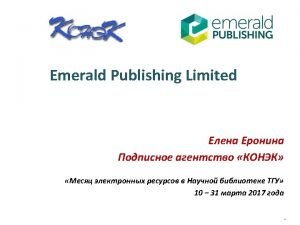 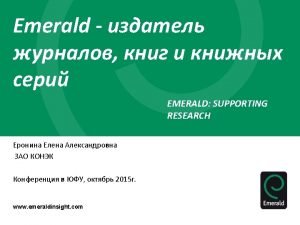 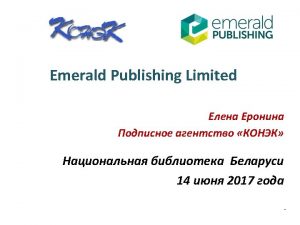