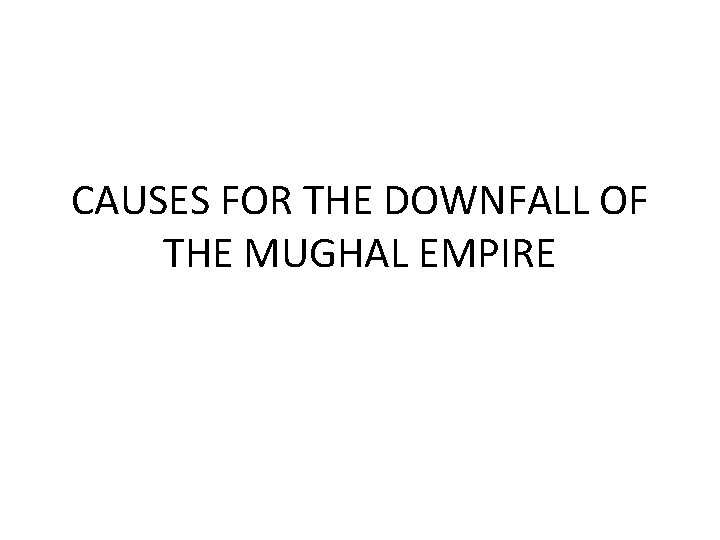 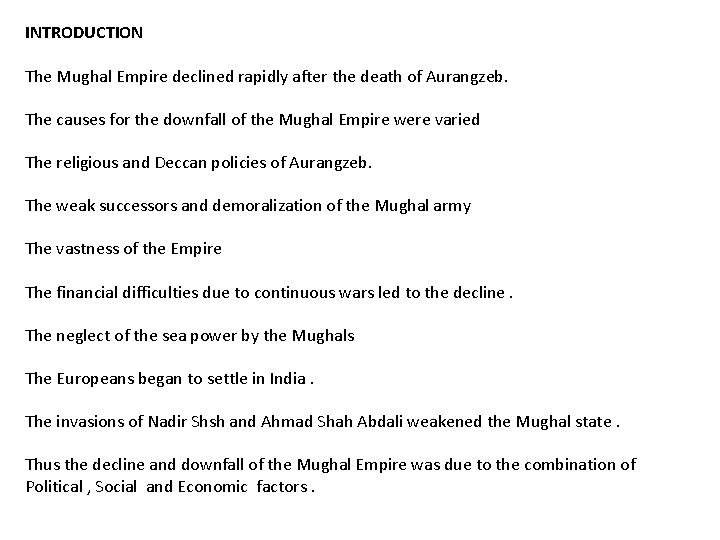 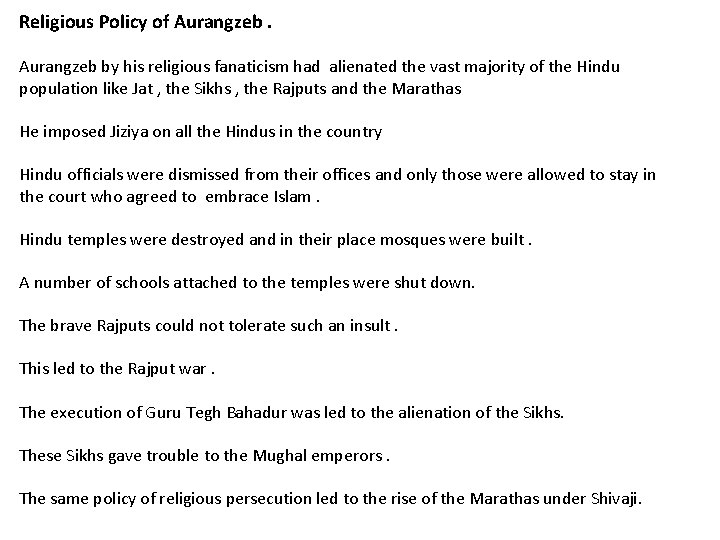 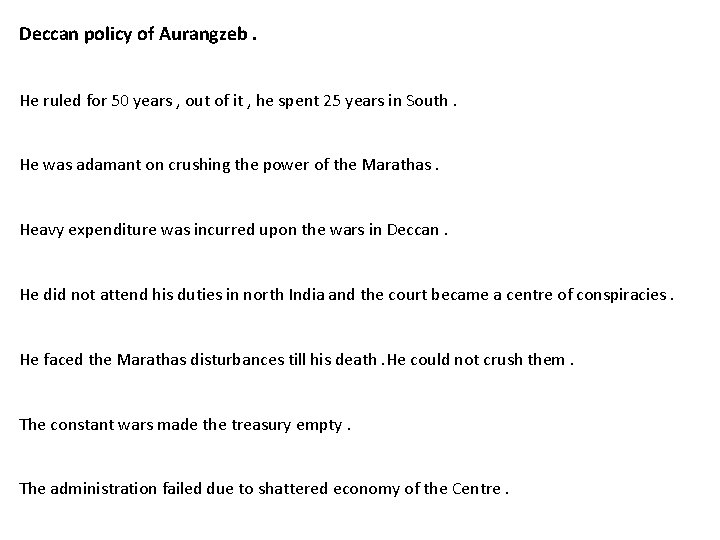 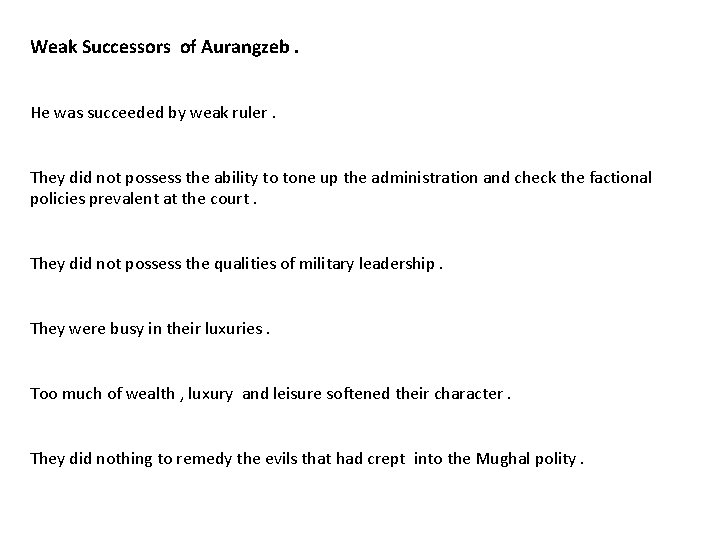 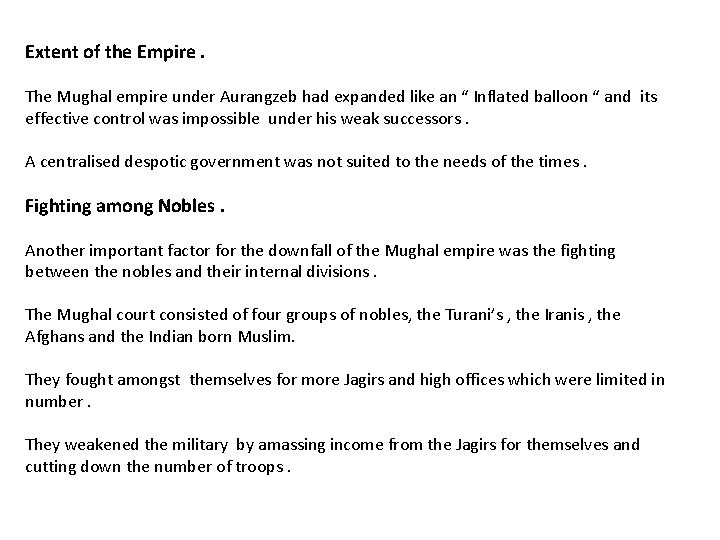 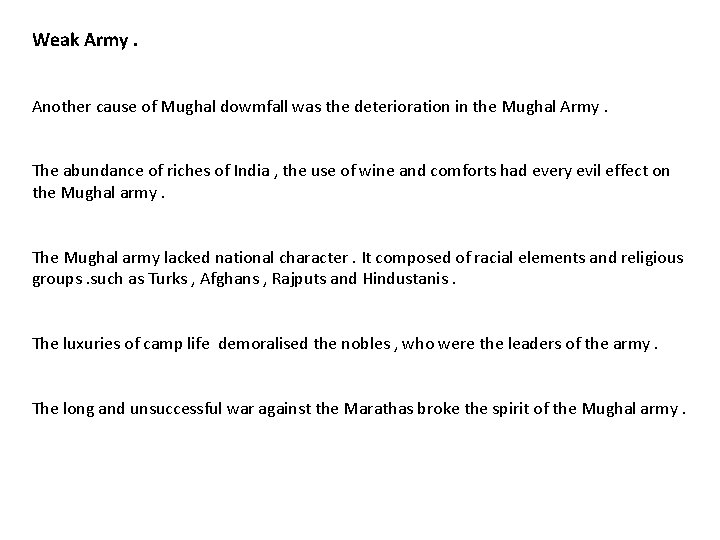 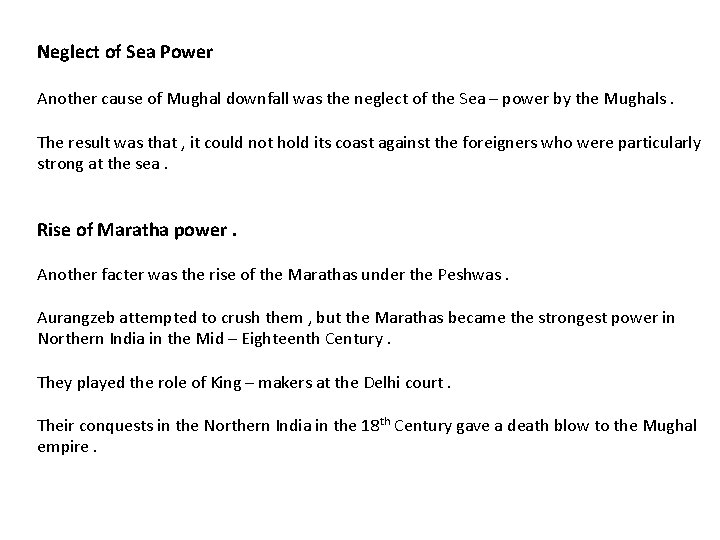 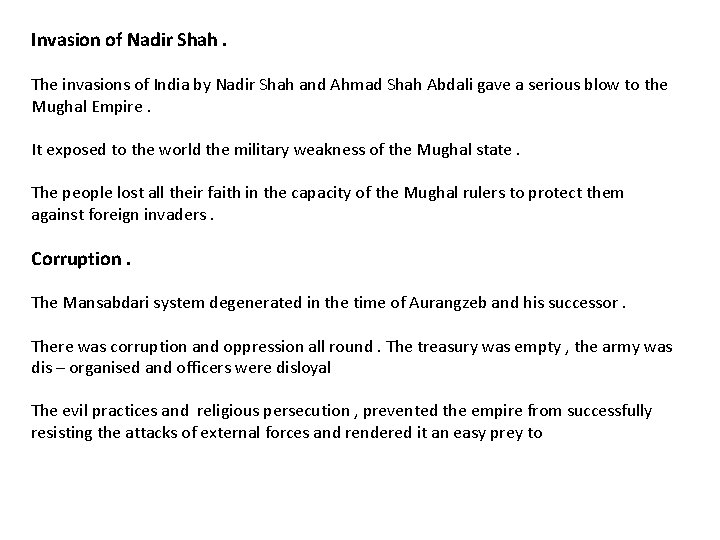 CAUSES FOR THE DOWNFALL OF THE MUGHAL EMPIRE

Religious Policy of Aurangzeb by his religious fanaticism had alienated the vast majority of the Hindu population like Jat , the Sikhs , the Rajputs and the Marathas He imposed Jiziya on all the Hindus in the country Hindu officials were dismissed from their offices and only those were allowed to stay in the court who agreed to embrace Islam. Hindu temples were destroyed and in their place mosques were built. A number of schools attached to the temples were shut down. The brave Rajputs could not tolerate such an insult. This led to the Rajput war. The execution of Guru Tegh Bahadur was led to the alienation of the Sikhs. These Sikhs gave trouble to the Mughal emperors. The same policy of religious persecution led to the rise of the Marathas under Shivaji.

Deccan policy of Aurangzeb. He ruled for 50 years , out of it , he spent 25 years in South. He was adamant on crushing the power of the Marathas. Heavy expenditure was incurred upon the wars in Deccan. He did not attend his duties in north India and the court became a centre of conspiracies. He faced the Marathas disturbances till his death. He could not crush them. The constant wars made the treasury empty. The administration failed due to shattered economy of the Centre.

Extent of the Empire. The Mughal empire under Aurangzeb had expanded like an “ Inflated balloon “ and its effective control was impossible under his weak successors. A centralised despotic government was not suited to the needs of the times. Fighting among Nobles. Another important factor for the downfall of the Mughal empire was the fighting between the nobles and their internal divisions. The Mughal court consisted of four groups of nobles, the Turani’s , the Iranis , the Afghans and the Indian born Muslim. They fought amongst themselves for more Jagirs and high offices which were limited in number. They weakened the military by amassing income from the Jagirs for themselves and cutting down the number of troops.

Weak Army. Another cause of Mughal dowmfall was the deterioration in the Mughal Army. The abundance of riches of India , the use of wine and comforts had every evil effect on the Mughal army. The Mughal army lacked national character. It composed of racial elements and religious groups. such as Turks , Afghans , Rajputs and Hindustanis. The luxuries of camp life demoralised the nobles , who were the leaders of the army. The long and unsuccessful war against the Marathas broke the spirit of the Mughal army.

Neglect of Sea Power Another cause of Mughal downfall was the neglect of the Sea – power by the Mughals. The result was that , it could not hold its coast against the foreigners who were particularly strong at the sea. Rise of Maratha power. Another facter was the rise of the Marathas under the Peshwas. Aurangzeb attempted to crush them , but the Marathas became the strongest power in Northern India in the Mid – Eighteenth Century. They played the role of King – makers at the Delhi court. Their conquests in the Northern India in the 18 th Century gave a death blow to the Mughal empire.

Invasion of Nadir Shah. The invasions of India by Nadir Shah and Ahmad Shah Abdali gave a serious blow to the Mughal Empire. It exposed to the world the military weakness of the Mughal state. The people lost all their faith in the capacity of the Mughal rulers to protect them against foreign invaders. Corruption. The Mansabdari system degenerated in the time of Aurangzeb and his successor. There was corruption and oppression all round. The treasury was empty , the army was dis – organised and officers were disloyal The evil practices and religious persecution , prevented the empire from successfully resisting the attacks of external forces and rendered it an easy prey to 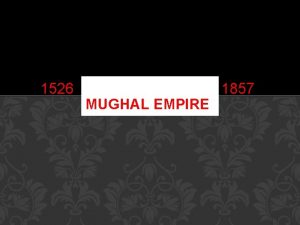 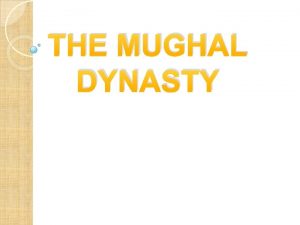 THE MUGHAL DYNASTY WHAT WAS MUGHAL EMPIRE THE 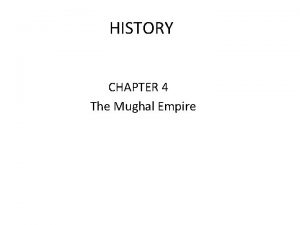 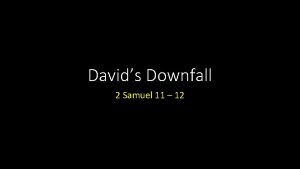 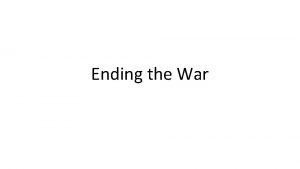 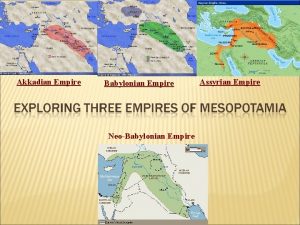 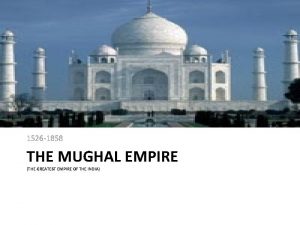 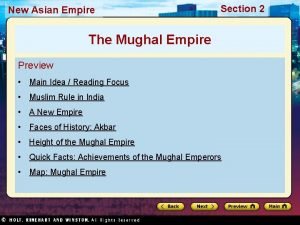