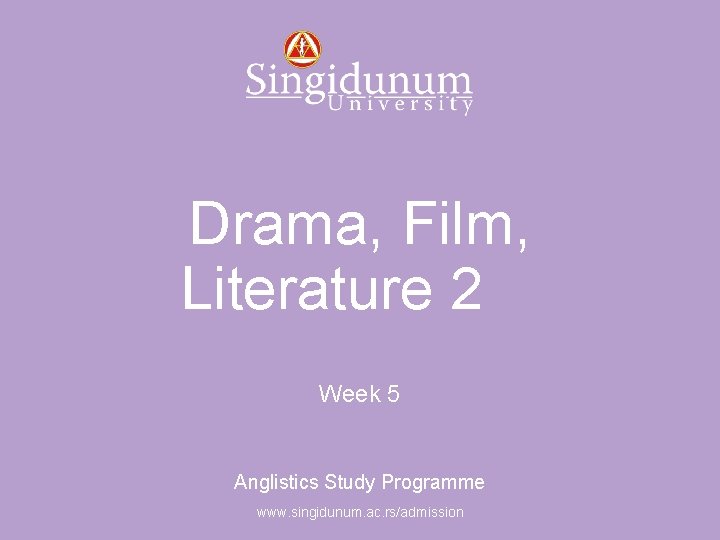 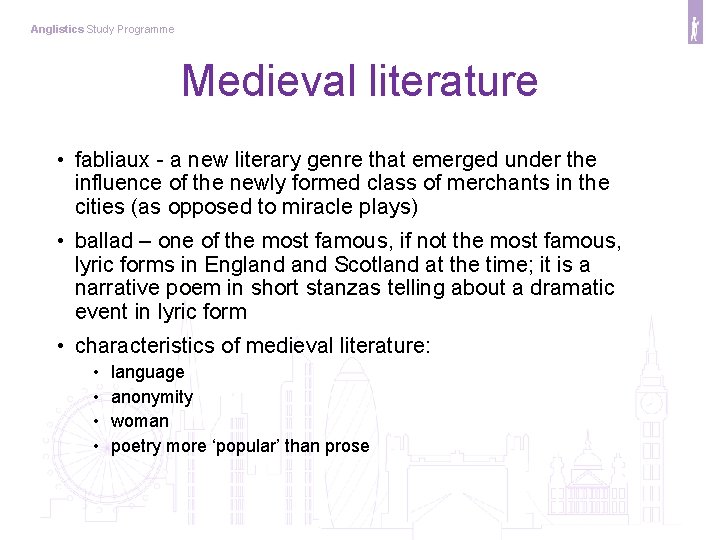 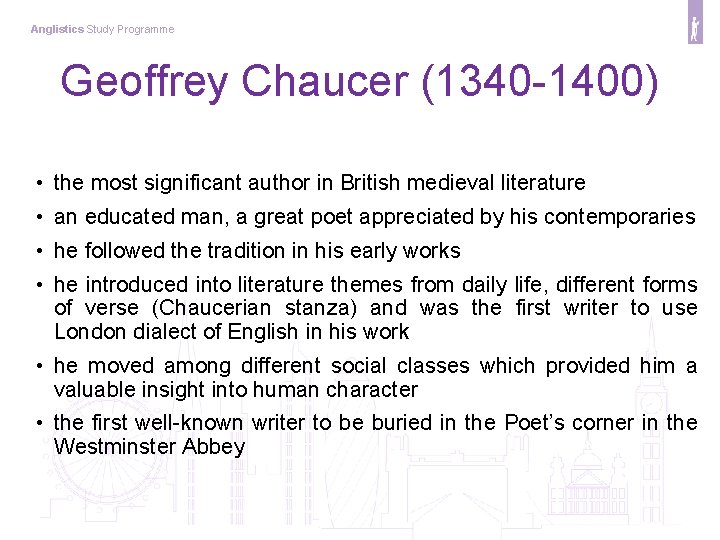 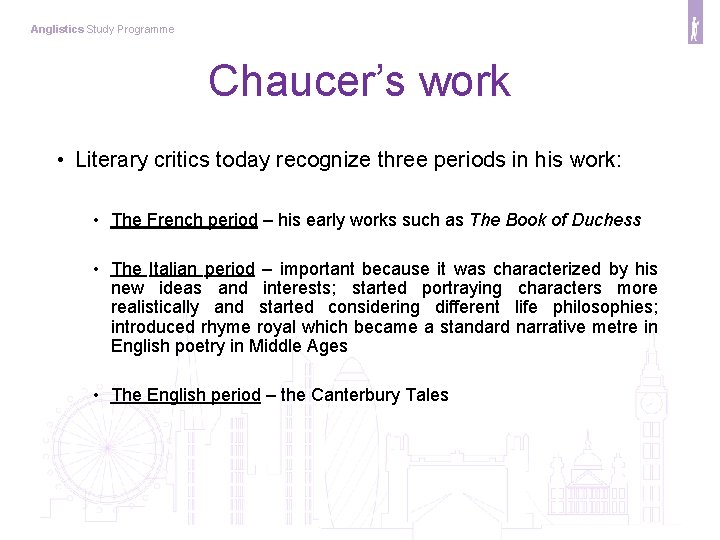 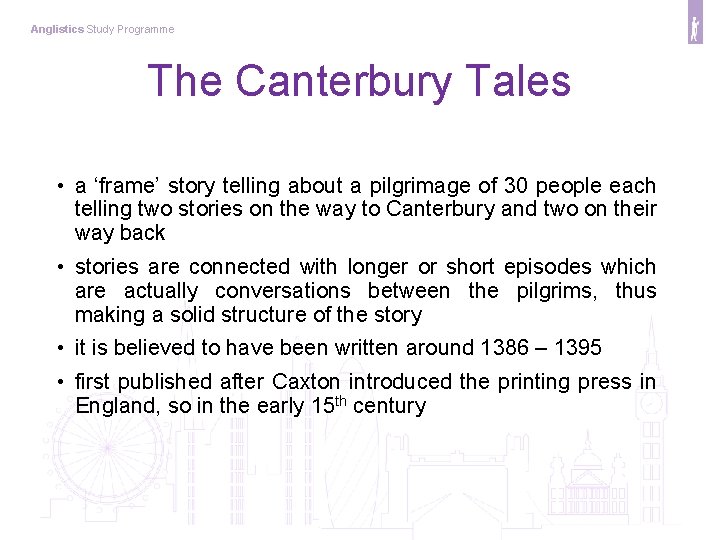 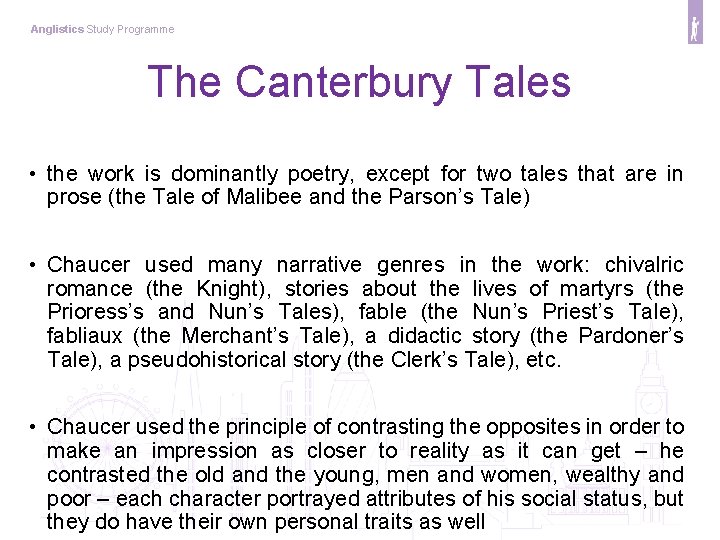 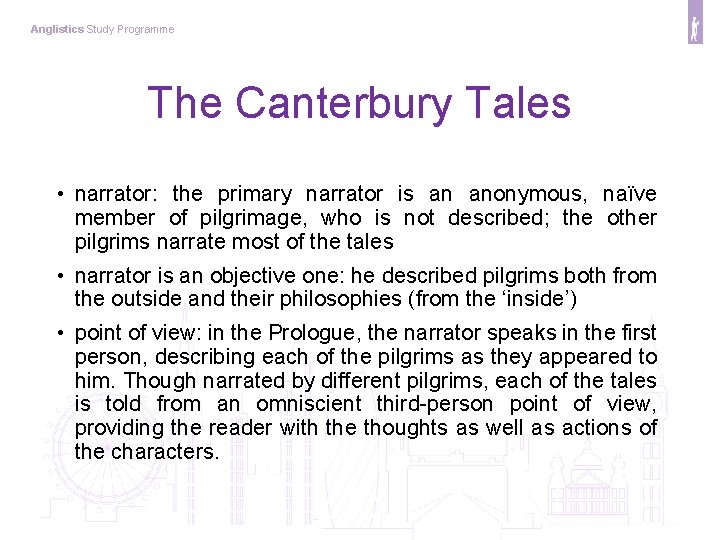 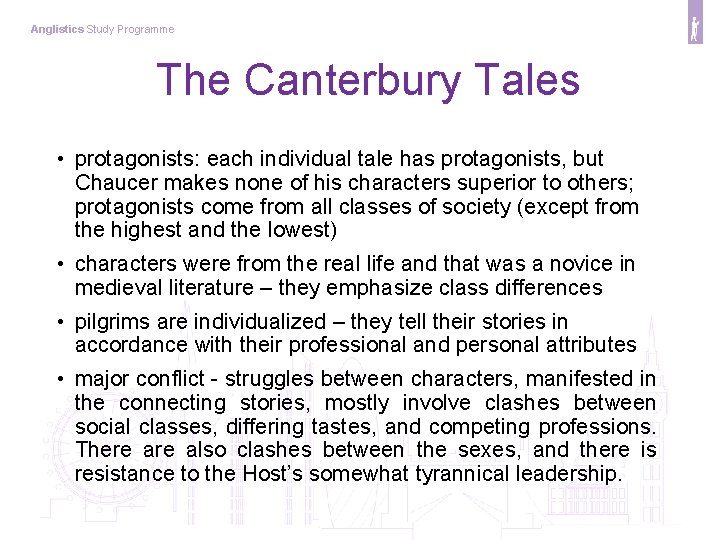 Anglistics Study Programme Medieval literature • fabliaux - a new literary genre that emerged under the influence of the newly formed class of merchants in the cities (as opposed to miracle plays) • ballad – one of the most famous, if not the most famous, lyric forms in England Scotland at the time; it is a narrative poem in short stanzas telling about a dramatic event in lyric form • characteristics of medieval literature: • • language anonymity woman poetry more ‘popular’ than prose

Anglistics Study Programme Geoffrey Chaucer (1340 -1400) • the most significant author in British medieval literature • an educated man, a great poet appreciated by his contemporaries • he followed the tradition in his early works • he introduced into literature themes from daily life, different forms of verse (Chaucerian stanza) and was the first writer to use London dialect of English in his work • he moved among different social classes which provided him a valuable insight into human character • the first well-known writer to be buried in the Poet’s corner in the Westminster Abbey

Anglistics Study Programme Chaucer’s work • Literary critics today recognize three periods in his work: • The French period – his early works such as The Book of Duchess • The Italian period – important because it was characterized by his new ideas and interests; started portraying characters more realistically and started considering different life philosophies; introduced rhyme royal which became a standard narrative metre in English poetry in Middle Ages • The English period – the Canterbury Tales

Anglistics Study Programme The Canterbury Tales • a ‘frame’ story telling about a pilgrimage of 30 people each telling two stories on the way to Canterbury and two on their way back • stories are connected with longer or short episodes which are actually conversations between the pilgrims, thus making a solid structure of the story • it is believed to have been written around 1386 – 1395 • first published after Caxton introduced the printing press in England, so in the early 15 th century

Anglistics Study Programme The Canterbury Tales • the work is dominantly poetry, except for two tales that are in prose (the Tale of Malibee and the Parson’s Tale) • Chaucer used many narrative genres in the work: chivalric romance (the Knight), stories about the lives of martyrs (the Prioress’s and Nun’s Tales), fable (the Nun’s Priest’s Tale), fabliaux (the Merchant’s Tale), a didactic story (the Pardoner’s Tale), a pseudohistorical story (the Clerk’s Tale), etc. • Chaucer used the principle of contrasting the opposites in order to make an impression as closer to reality as it can get – he contrasted the old and the young, men and women, wealthy and poor – each character portrayed attributes of his social status, but they do have their own personal traits as well

Anglistics Study Programme The Canterbury Tales • narrator: the primary narrator is an anonymous, naïve member of pilgrimage, who is not described; the other pilgrims narrate most of the tales • narrator is an objective one: he described pilgrims both from the outside and their philosophies (from the ‘inside’) • point of view: in the Prologue, the narrator speaks in the first person, describing each of the pilgrims as they appeared to him. Though narrated by different pilgrims, each of the tales is told from an omniscient third-person point of view, providing the reader with the thoughts as well as actions of the characters.

Anglistics Study Programme The Canterbury Tales • protagonists: each individual tale has protagonists, but Chaucer makes none of his characters superior to others; protagonists come from all classes of society (except from the highest and the lowest) • characters were from the real life and that was a novice in medieval literature – they emphasize class differences • pilgrims are individualized – they tell their stories in accordance with their professional and personal attributes • major conflict - struggles between characters, manifested in the connecting stories, mostly involve clashes between social classes, differing tastes, and competing professions. There also clashes between the sexes, and there is resistance to the Host’s somewhat tyrannical leadership. 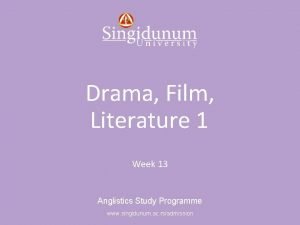 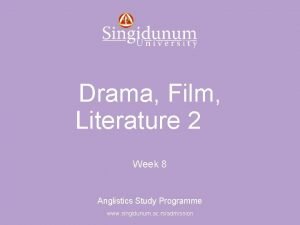 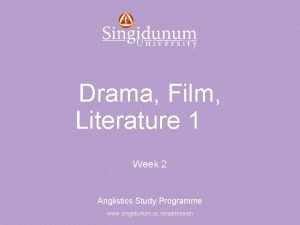 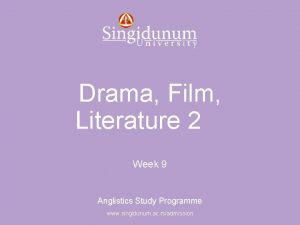 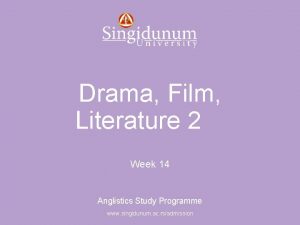 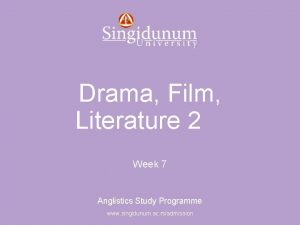 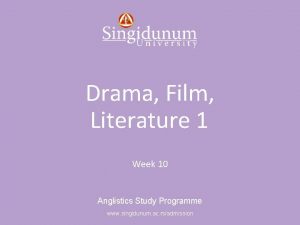