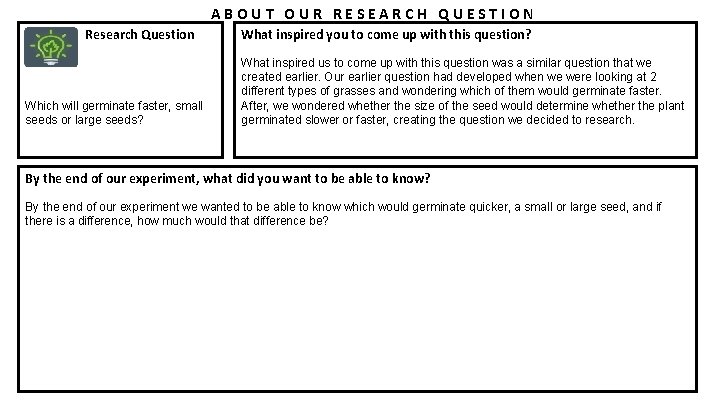 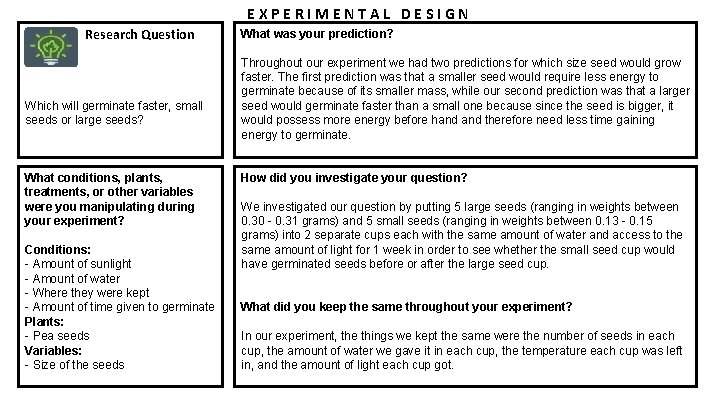 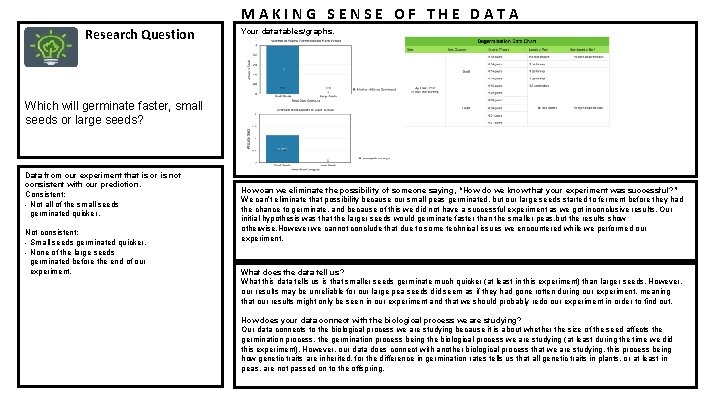 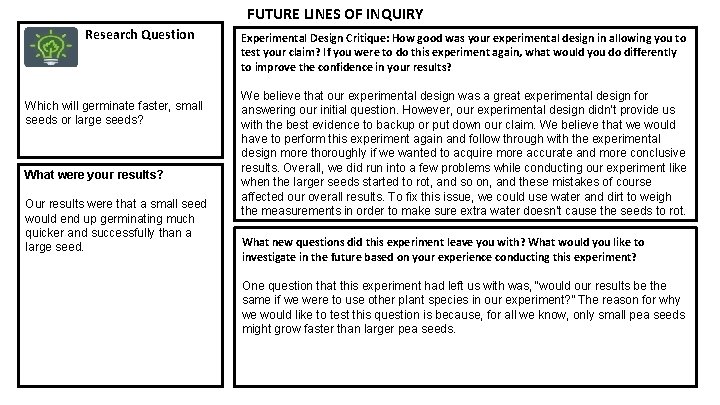 ABOUT OUR RESEARCH QUESTION Research Question Which will germinate faster, small seeds or large seeds? What inspired you to come up with this question? What inspired us to come up with this question was a similar question that we created earlier. Our earlier question had developed when we were looking at 2 different types of grasses and wondering which of them would germinate faster. After, we wondered whether the size of the seed would determine whether the plant germinated slower or faster, creating the question we decided to research. By the end of our experiment, what did you want to be able to know? By the end of our experiment we wanted to be able to know which would germinate quicker, a small or large seed, and if there is a difference, how much would that difference be?

EXPERIMENTAL DESIGN Research Question Which will germinate faster, small seeds or large seeds? What conditions, plants, treatments, or other variables were you manipulating during your experiment? Conditions: - Amount of sunlight - Amount of water - Where they were kept - Amount of time given to germinate Plants: - Pea seeds Variables: - Size of the seeds What was your prediction? Throughout our experiment we had two predictions for which size seed would grow faster. The first prediction was that a smaller seed would require less energy to germinate because of its smaller mass, while our second prediction was that a larger seed would germinate faster than a small one because since the seed is bigger, it would possess more energy before hand therefore need less time gaining energy to germinate. How did you investigate your question? We investigated our question by putting 5 large seeds (ranging in weights between 0. 30 - 0. 31 grams) and 5 small seeds (ranging in weights between 0. 13 - 0. 15 grams) into 2 separate cups each with the same amount of water and access to the same amount of light for 1 week in order to see whether the small seed cup would have germinated seeds before or after the large seed cup. What did you keep the same throughout your experiment? In our experiment, the things we kept the same were the number of seeds in each cup, the amount of water we gave it in each cup, the temperature each cup was left in, and the amount of light each cup got.

MAKING SENSE OF THE DATA Research Question Your data tables/graphs. Which will germinate faster, small seeds or large seeds? Data from our experiment that is or is not consistent with our prediction. Consistent: - Not all of the small seeds germinated quicker. Not consistent: - Small seeds germinated quicker. - None of the large seeds germinated before the end of our experiment. How can we eliminate the possibility of someone saying, “How do we know that your experiment was successful? ” We can’t eliminate that possibility because our small peas germinated, but our large seeds started to ferment before they had the chance to germinate, and because of this we did not have a successful experiment as we got inconclusive results. Our initial hypothesis was that the larger seeds would germinate faster than the smaller peas, but the results show otherwise. However we cannot conclude that due to some technical issues we encountered while we performed our experiment. What does the data tell us? What this data tells us is that smaller seeds germinate much quicker (at least in this experiment) than larger seeds. However, our results may be unreliable for our large pea seeds did seem as if they had gone rotten during our experiment, meaning that our results might only be seen in our experiment and that we should probably redo our experiment in order to find out. How does your data connect with the biological process we are studying? Our data connects to the biological process we are studying because it is about whether the size of the seed affects the germination process, the germination process being the biological process we are studying (at least during the time we did this experiment). However, our data does connect with another biological process that we are studying, this process being how genetic traits are inherited, for the difference in germination rates tells us that all genetic traits in plants, or at least in peas, are not passed on to the offspring.

FUTURE LINES OF INQUIRY Research Question Which will germinate faster, small seeds or large seeds? What were your results? Our results were that a small seed would end up germinating much quicker and successfully than a large seed. Experimental Design Critique: How good was your experimental design in allowing you to test your claim? If you were to do this experiment again, what would you do differently to improve the confidence in your results? We believe that our experimental design was a great experimental design for answering our initial question. However, our experimental design didn’t provide us with the best evidence to backup or put down our claim. We believe that we would have to perform this experiment again and follow through with the experimental design more thoroughly if we wanted to acquire more accurate and more conclusive results. Overall, we did run into a few problems while conducting our experiment like when the larger seeds started to rot, and so on, and these mistakes of course affected our overall results. To fix this issue, we could use water and dirt to weigh the measurements in order to make sure extra water doesn’t cause the seeds to rot. What new questions did this experiment leave you with? What would you like to investigate in the future based on your experience conducting this experiment? One question that this experiment had left us with was, “would our results be the same if we were to use other plant species in our experiment? ” The reason for why we would like to test this question is because, for all we know, only small pea seeds might grow faster than larger pea seeds. 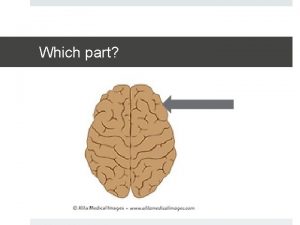 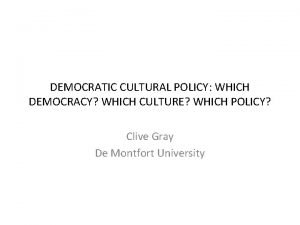 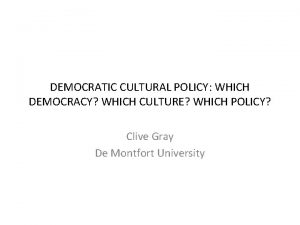