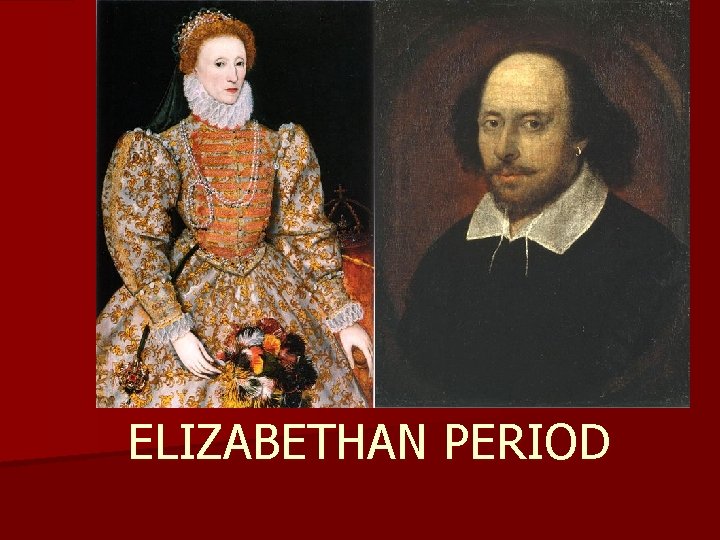 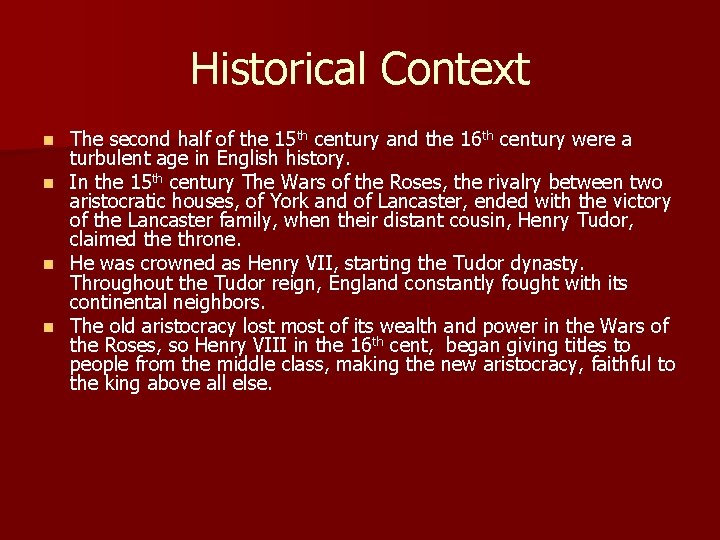 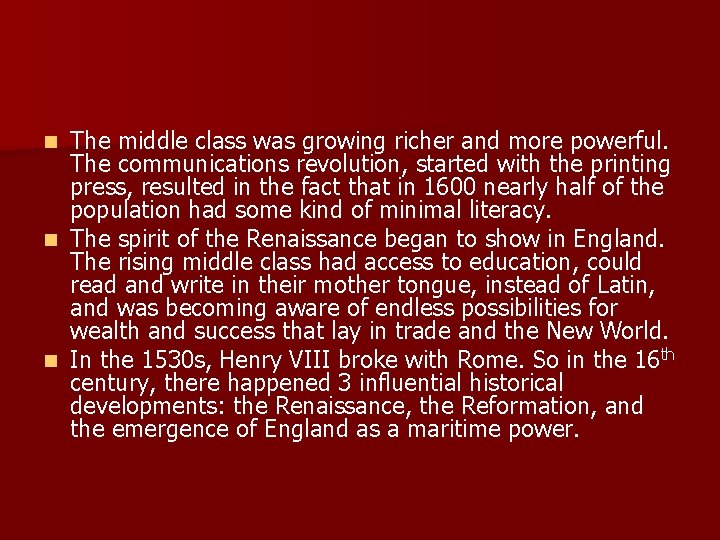 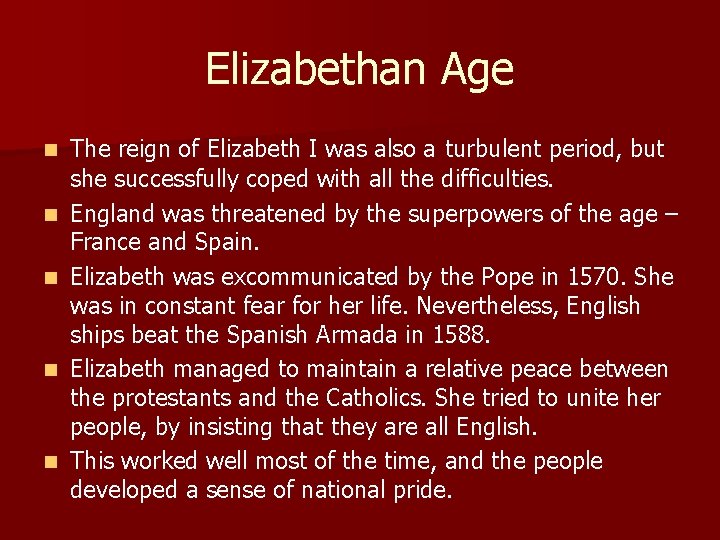 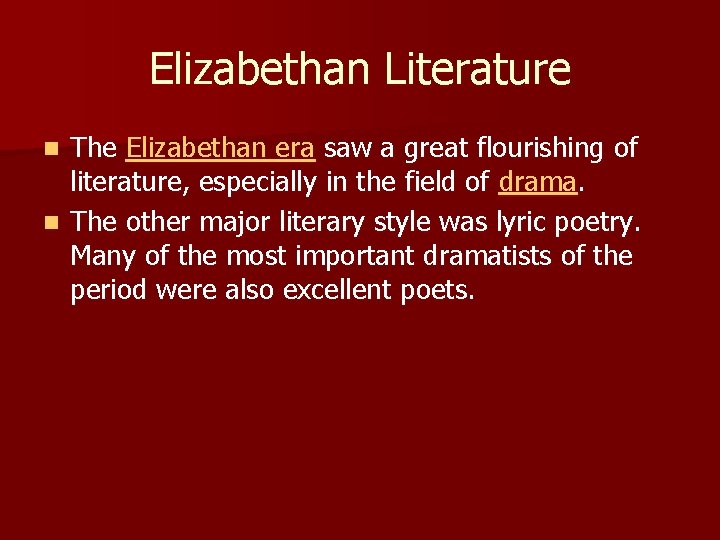 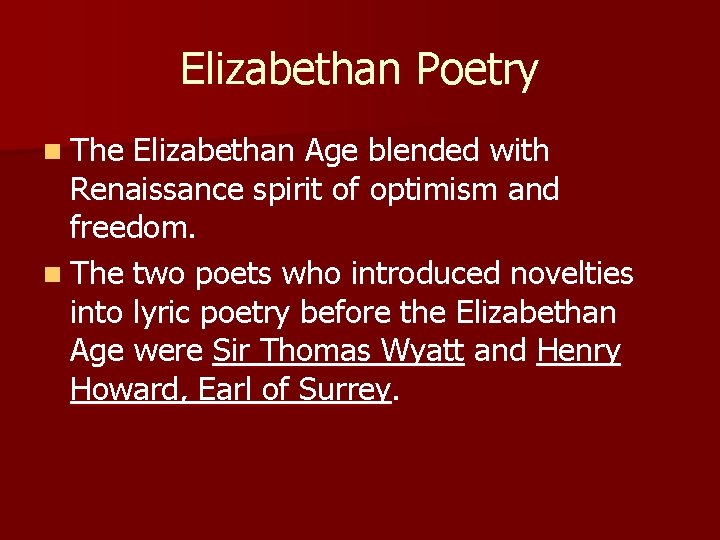 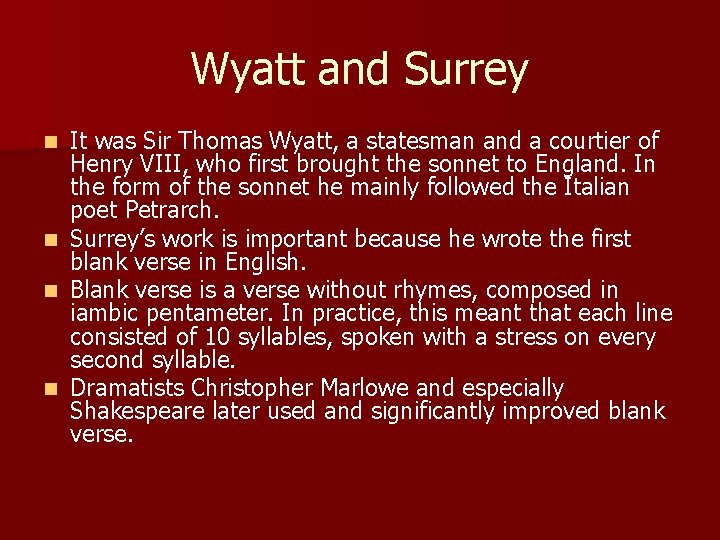 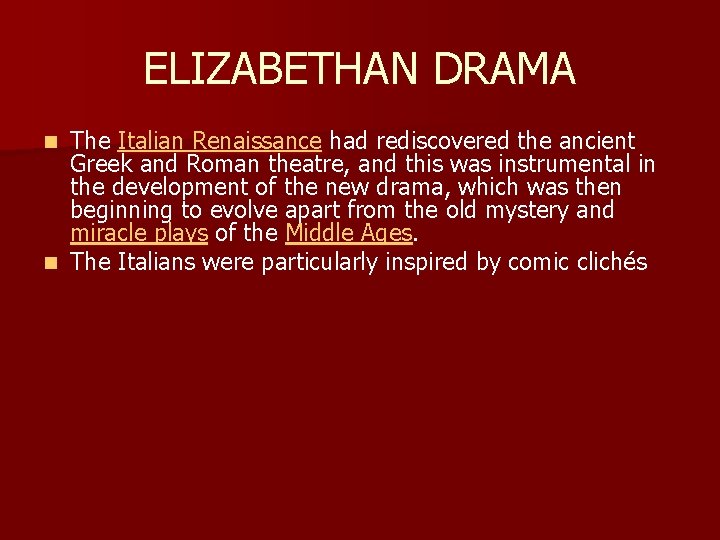 Historical Context The second half of the 15 th century and the 16 th century were a turbulent age in English history. n In the 15 th century The Wars of the Roses, the rivalry between two aristocratic houses, of York and of Lancaster, ended with the victory of the Lancaster family, when their distant cousin, Henry Tudor, claimed the throne. n He was crowned as Henry VII, starting the Tudor dynasty. Throughout the Tudor reign, England constantly fought with its continental neighbors. n The old aristocracy lost most of its wealth and power in the Wars of the Roses, so Henry VIII in the 16 th cent, began giving titles to people from the middle class, making the new aristocracy, faithful to the king above all else. n

The middle class was growing richer and more powerful. The communications revolution, started with the printing press, resulted in the fact that in 1600 nearly half of the population had some kind of minimal literacy. n The spirit of the Renaissance began to show in England. The rising middle class had access to education, could read and write in their mother tongue, instead of Latin, and was becoming aware of endless possibilities for wealth and success that lay in trade and the New World. n In the 1530 s, Henry VIII broke with Rome. So in the 16 th century, there happened 3 influential historical developments: the Renaissance, the Reformation, and the emergence of England as a maritime power. n

Elizabethan Age n n n The reign of Elizabeth I was also a turbulent period, but she successfully coped with all the difficulties. England was threatened by the superpowers of the age – France and Spain. Elizabeth was excommunicated by the Pope in 1570. She was in constant fear for her life. Nevertheless, English ships beat the Spanish Armada in 1588. Elizabeth managed to maintain a relative peace between the protestants and the Catholics. She tried to unite her people, by insisting that they are all English. This worked well most of the time, and the people developed a sense of national pride.

Elizabethan Literature The Elizabethan era saw a great flourishing of literature, especially in the field of drama. n The other major literary style was lyric poetry. Many of the most important dramatists of the period were also excellent poets. n

Elizabethan Poetry n The Elizabethan Age blended with Renaissance spirit of optimism and freedom. n The two poets who introduced novelties into lyric poetry before the Elizabethan Age were Sir Thomas Wyatt and Henry Howard, Earl of Surrey.

Wyatt and Surrey It was Sir Thomas Wyatt, a statesman and a courtier of Henry VIII, who first brought the sonnet to England. In the form of the sonnet he mainly followed the Italian poet Petrarch. n Surrey’s work is important because he wrote the first blank verse in English. n Blank verse is a verse without rhymes, composed in iambic pentameter. In practice, this meant that each line consisted of 10 syllables, spoken with a stress on every second syllable. n Dramatists Christopher Marlowe and especially Shakespeare later used and significantly improved blank verse. n

ELIZABETHAN DRAMA The Italian Renaissance had rediscovered the ancient Greek and Roman theatre, and this was instrumental in the development of the new drama, which was then beginning to evolve apart from the old mystery and miracle plays of the Middle Ages. n The Italians were particularly inspired by comic clichés n 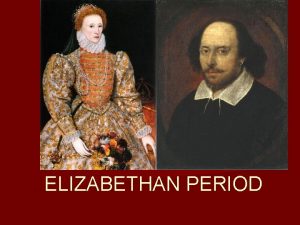 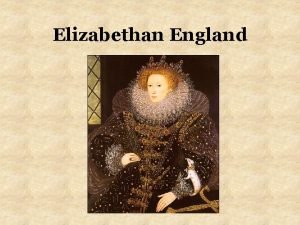 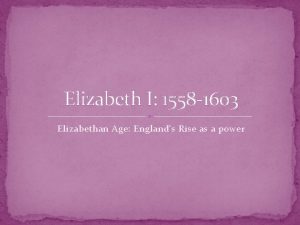 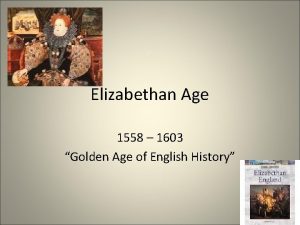 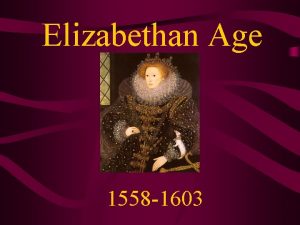 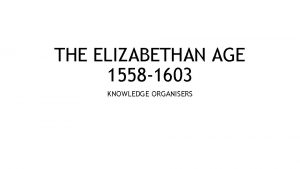 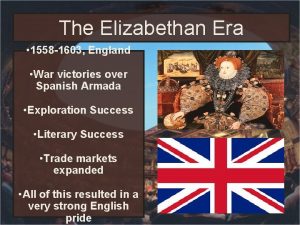 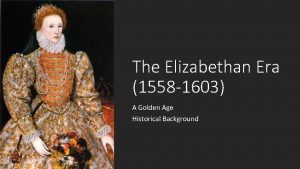